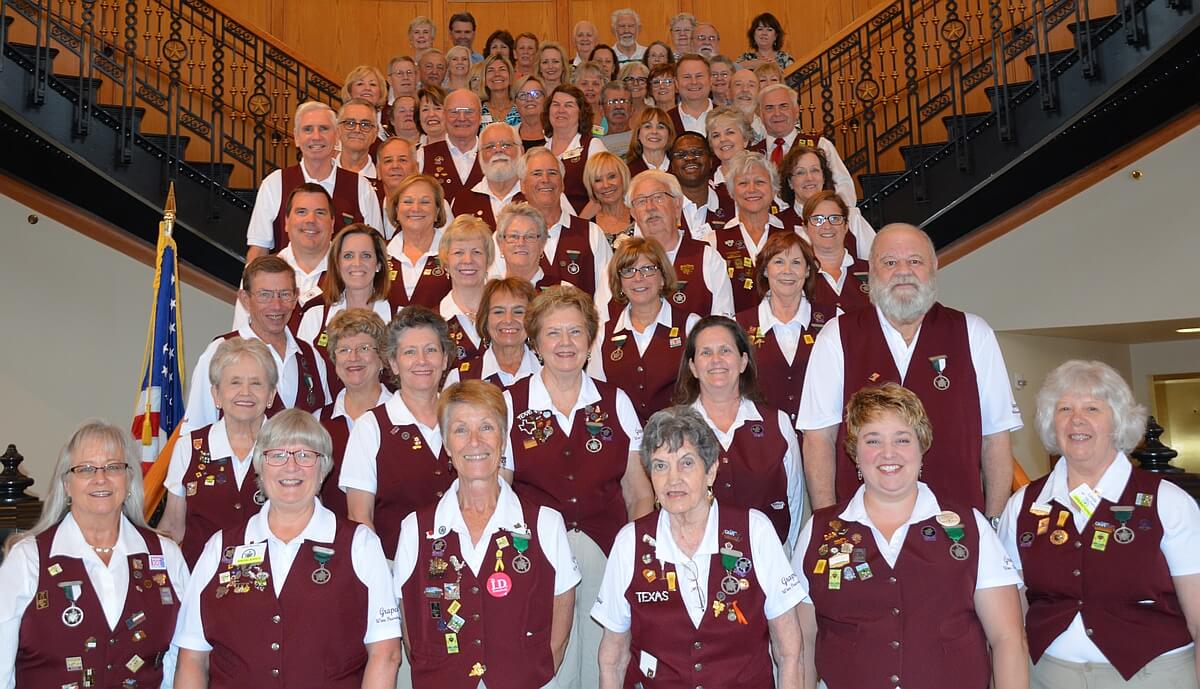 Have you attended GrapeFest or taken a ride on the Jazz Wine Trains? If so, I bet you have been served by members of The Grapevine Wine Pouring Society. The Grapevine Wine Pouring Society (GWPS) is a volunteer organization that represents the City of Grapevine and serves wine at community festivals and events. As an extension of the City of Grapevine’s Convention and Visitors Bureau, members of the group are ambassadors for the city and for the Texas wine industry. In its twenty-two year history, GWPS has spent countless hours serving wine at both citywide events and also events throughout the greater Dallas-Fort Worth area.

I attended a recent meeting to find out more. The monthly meetings occur on the last Monday of the month at the Grapevine Convention and Visitors Bureau (CVB). I was surprised to see such a large turnout. There are over 100 current members in the GWPS, and it seemed that most of them were in attendance. I was delighted when one GWPS leader showed me that she was wearing her Texas Wine Lover pin! The large ballroom was set for a wine tasting with three Texas wines to sample during the meeting. When the meeting was called to order, there was a call for twelve volunteers to help pour wine. It wasn’t difficult to find volunteers in this room! We tasted Llano Estacado Winery THP Stampede 2013, Locations TX6 Red, and Umbra Winery’s Red Fusion. 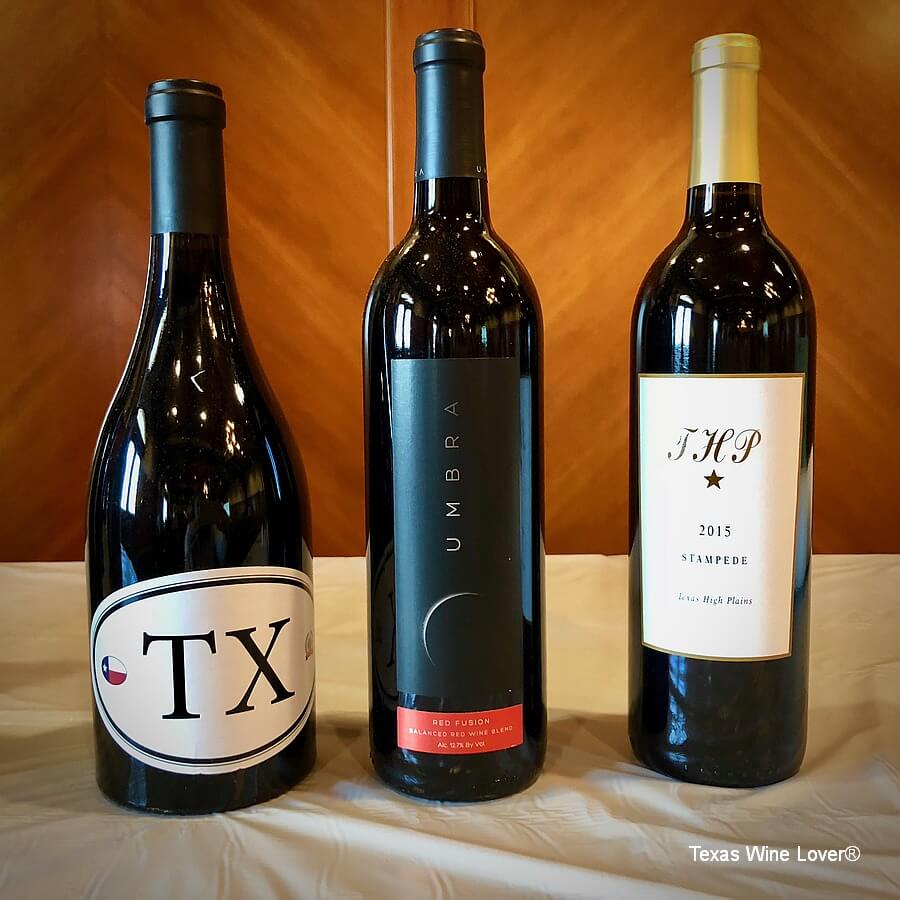 John Wilson, owner and winemaker of Umbra Winery, led the educational component of the evening. He started his talk by thanking the members of the Grapevine Wine Pouring Society. He mentioned how the demands on his small staff can be overwhelming during festivals and special events, and expressed his gratitude for the valuable service that GWPS provides. Next, he gave an update on the activities at Umbra Winery at La Buena Vida Vineyards. As Texas Wine Lover has reported previously, John and Debbie purchased this vineyard in Springtown from Dr. Bobby Smith. Plans for the site include a complete winery with tasting room, a large event center, and cottage rentals. Seven cottages were purchased from the DIY Network show “Texas Flip and Move” and are currently available to rent.

The business portion of the meeting included introduction of the guests in attendance. Before joining, prospective members are required to attend a meeting as a guest. There were five prospective new members at the meeting I attended. Other meeting topics included discussion of the Main Street Fest craft beer festival and planning for September’s GrapeFest, Grapevine’s premier wine festival. It was reported that volunteers worked 553 shifts at Main Street Fest. A raffle and a trivia challenge added more fun as winners collected prizes. As you would expect, a full slate of officers and staff guidance from the Grapevine Convention & Visitors Bureau is required to organize a volunteer effort this large. It certainly seems that the City of Grapevine strongly supports the GWPS’s efforts. 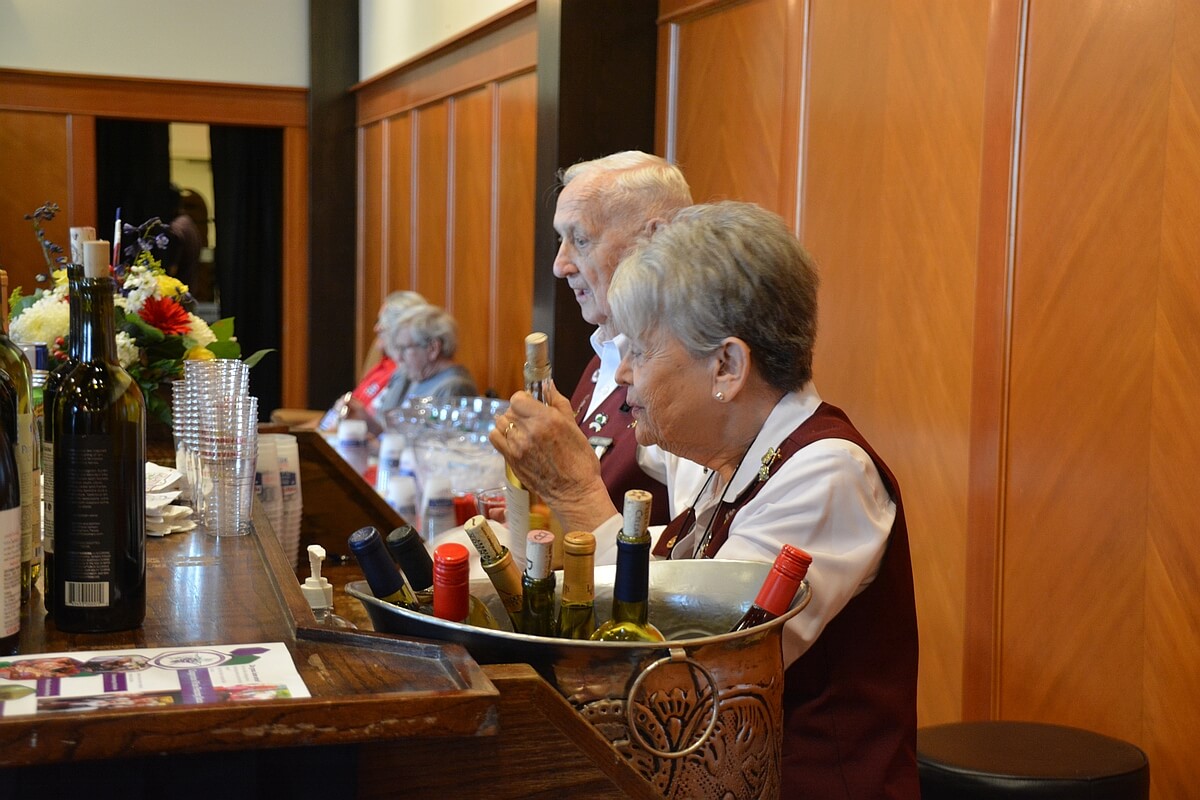 Michael Durrance has been a Grapevine Wine Pouring Society member for four years. He cites the educational programs led by members among his favorite Society activities. He has met a large number of fellow wine lovers and is inspired by their years of support of the Texas wine industry. Michael was at GrapeFest when he first met members of the Society who encouraged him to join. This seems to be the way most new members discover GWPS. At the meeting I attended, three guests had arrived at the urging of one enthusiastic current member who recruited them from a Grapevine tasting room. 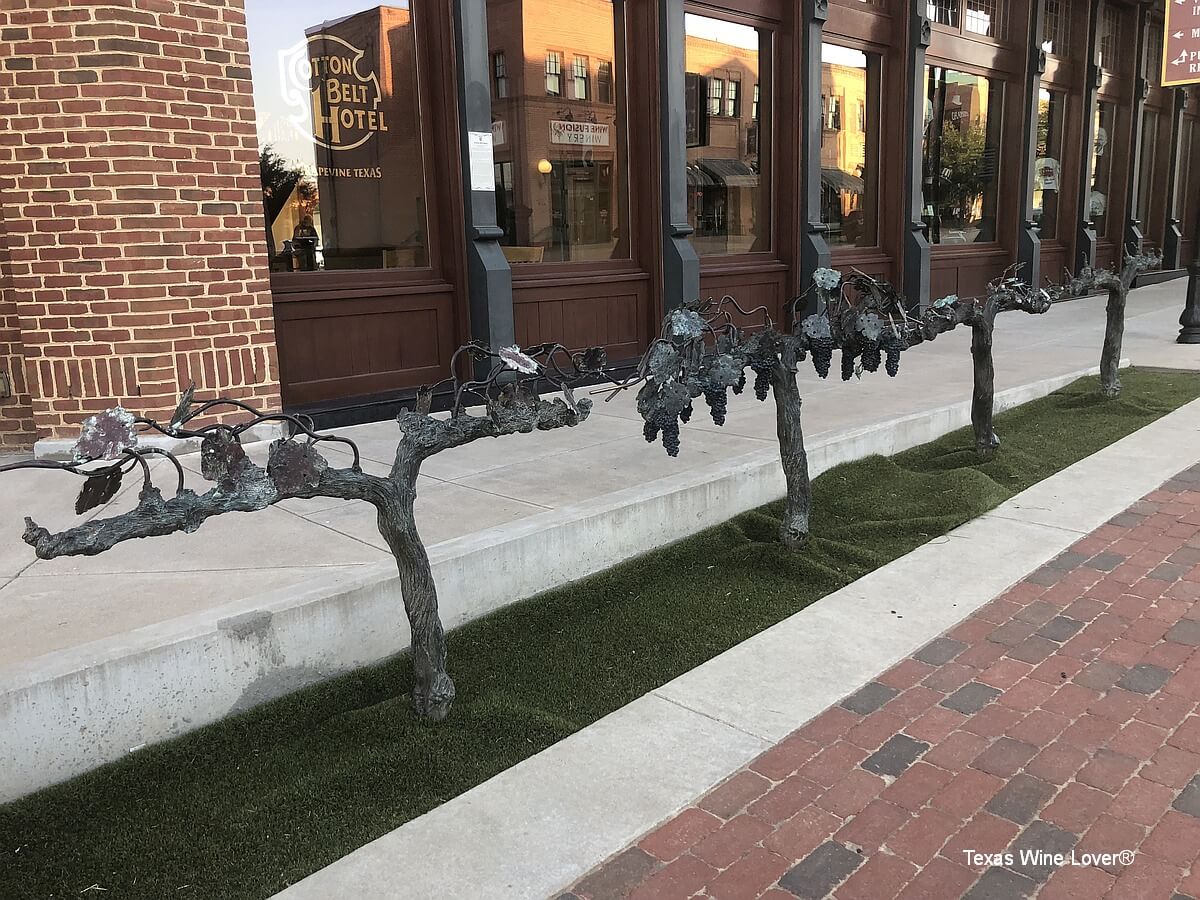 Donations and tips that the GWPS receives throughout the year are used to fund public art in Grapevine. The most prominent pieces are the bronzes outside the Convention and Visitors Bureau that show a grapevine as it changes throughout the year. Another piece is found inside the CVB and includes a wine barrel and the GWPS’s signature uniform, a maroon vest. 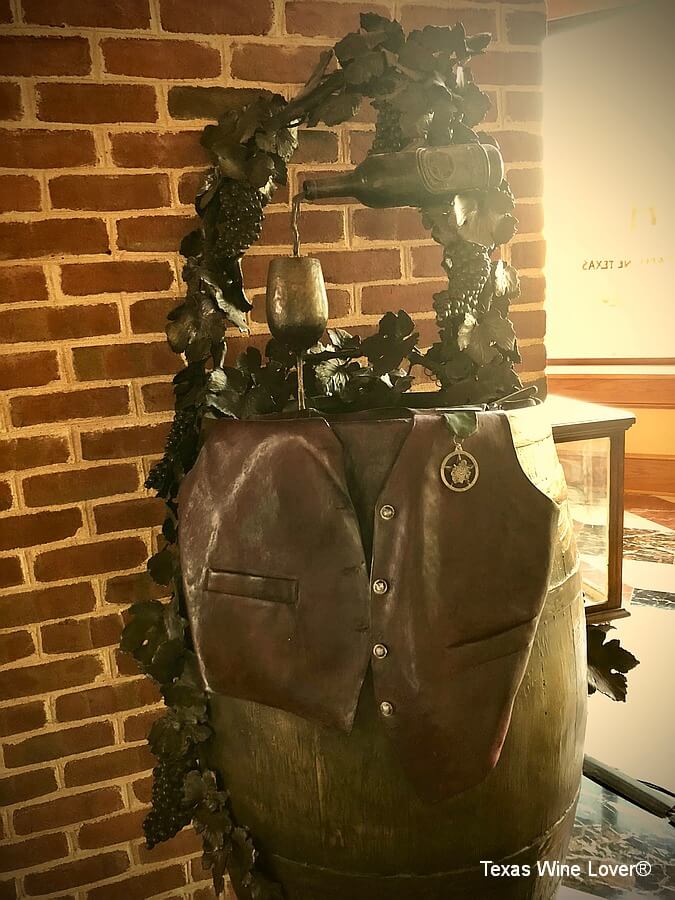 Interested in membership? Joining this unique group means that you will learn about Texas wine at monthly educational meetings, meet other wine lovers at regular social activities and field trips, and serve your community while serving your favorite beverage. Living in Grapevine is not required; members are drawn from all over North Texas. Membership requirements include attending a minimum of five meetings per year, obtaining a TABC server certification, and participating in at least two of three major events (Main Street Days, GrapeFest, and Main Street Wine and Arts Festival). At least 12 volunteer hours are required annually. Membership dues are $60 in the first year and $25 annually thereafter.

If you would like to consider joining the Grapevine Wine Pouring Society, please contact membership chair Steve Felton at GWPS76051@yahoo.com. More information can be obtained on the Grapevine website.

Thank you for recognizing our great volunteer organization!

I agree! I’m surprised more places do not have a great organization like this.

Thanks for the great article about The Grapevine Wine Pouring Society and for including a picture of my wife Paula and I in your article. As one of a few charter members still left, we’re looking forward to the 25th anniversary in 2020. Hope we make it!. And, yes, we both wear the Texas Wine Lovers Pin. You gotta love Grapevine!

Great article! Great to see Dick and Paula at one of the events we support, as well as one of the annual group photos. Thanks to Jeff and his team for all they do on Texas Wine Lover and for Texas wine!

MENU
wpDiscuz
6
0
Would love your thoughts, please comment.x
()
x
| Reply
Send this to a friend