The term Pét-Nat is the cute, short nickname for a type of sparkling wine called pétillant-naturel, meaning “sparkling naturally.” These Pét-Nat wines have become increasingly popular over the past decade, and now are being produced by an increasing number of Texas winemakers.

Pét-Nat wines are based on a method of producing sparkling wines known as méthode ancestrale that was practiced in some areas of France—like Gaillac, Limoux, and Bugey—long before Champagne began to be produced in the 1800s via the well-known méthode traditionnelle. Making sparkling wines via the ancestral method was sort of rediscovered in France’s Loire Valley in the 1990s by progressive winemakers experimenting with organic viticulture and minimum intervention (natural) winemaking. There were often accidents and unpredictable results, but overall it was exciting. This experimental movement spread, and Pét-Nat became an important trend in the wine world. The key differences between the ancestral method and traditional method are described below. 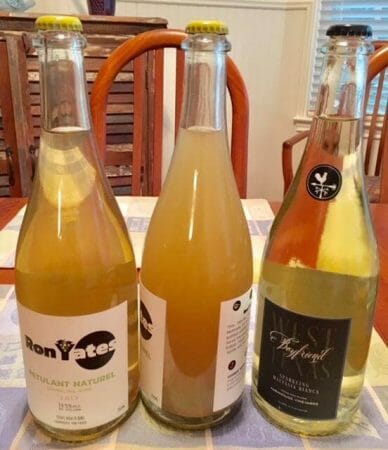 Some Texas Pét-Nats produced from Malvasia Bianca grapes. Note the cloudiness in the center bottle after sediment was swirled from the bottom of the bottle.

For Pét-Nat produced by the méthode ancestrale, the original fermentation is started in a tank, and before primary fermentation is completed, the wine is bottled with no added sugars or yeast to finish fermentation and create carbon dioxide (bubbles and pressure) in bottle. The wines are typically produced at lower pressure (2-4 atmospheres, 30-55 psi) than Champagne and other sparkling wines, are usually sealed with a crimped crown-cap like a beer bottle, and may have some sediment left in the bottle. Pét-Nat is usually made from a single vintage to be consumed relatively soon after bottling and can be made from almost any grape variety.

Champagnes and other sparkling wines (Cremant, Cava, etc.) made via the méthode traditionnelle are produced in two distinct steps. First, a base wine is made in which fermentation is completed. A second fermentation of this base wine is initiated by the addition of a controlled amount of sugar and yeast before bottling to create carbon dioxide (bubbles and pressure) in bottle. Champagnes are often blends of different wines from multiple vintages and can be aged under cellar conditions. These sparkling wines are generally produced at higher pressure, up to 6 atmospheres or about 90 psi, than Pét-Nat. The dead yeast cells and fermentation sediment are cleared from the bottle by a process called disgorgement before the cork, safety wire cage, and capsule are added. 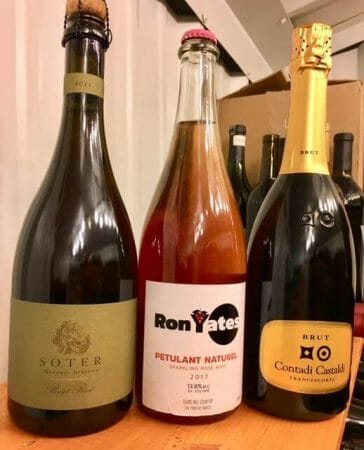 A Pét-Nat with crown cap between two méthode traditionnelle sparkling wines: a Brut Rosé from Oregon and a Brut Franciacorta from northern Italy

Deciding when to bottle a Pét-Nat is important since the amount of sugar and active yeast cells remaining in the wine will determine the amount of carbon dioxide and pressure that develops. Too much residual sugar can result in excessive pressure that may cause “explosive” release of the wine when uncapped. Too little residual sugar may result in a less “frizzante” wine than preferred. Information available suggests that many winemakers look for about 10 grams of sugar per liter (about 1%) as the target for bottling. This is very near the end of primary fermentation that would have started at about 18-20% sugar in the harvested grapes. Careful and frequent analysis is required in order to determine the targeted residual sugar level.

While wines produced via méthode ancestrale have been around for hundreds of years, the name pétillant-naturel, and the nickname Pét-Nat, are believed to have started in the 1990s in the Loire Valley of France when several “natural” winemakers began to rediscover this method of creating sparkling wines. It did not take long for the name to catch on, and Pét-Nat wines are now being produced in many wine regions around the world: Loire Valley in northern France, Languedoc in southern France, northern Italy, Australia, California, New York, and of course, Texas. 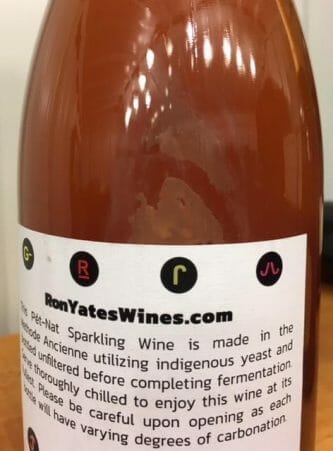 Many Pét-Nat wines will contain some sediment from completion of the primary fermentation in bottle. This sediment makes the wines cloudy or hazy and can be bothersome to some folks. The issue of sediment is an important one since it can appear unsightly in the bottles. Of even more importance is the buildup of so many deposits and solids (especially tartrate crystals) that can create an almost explosive rush of wine from the bottle when opened, causing a wasteful and possible unsafe situation. Winemakers appear to have several choices to deal with sediment in their finished product, as described below.

A slow, cold fermentation in a chilly wine cellar or temperature controlled stainless steel tank can keep fermentation activity at a minimum level, allowing sediment in the wine to settle before the bottling process.

As fermentation nears completion, refrigeration to just above the freezing temperature can slow things down so that sediment and tartrate crystals can settle out. This is basically similar to the cold stabilization process used for many white still wines.

If fermentation is done at a warmer, ambient temperature, filtration before bottling may become a necessary option. This is similar to filtering sediment from many still wines before bottling and does not use all that energy required to chill bulk wine.

If fermentation is done at a warmer, ambient temperature, and filtration is not an option, then it may be necessary to disgorge the sediment from the bottle. This is similar to the process used in producing Champagne and other sparkling wines wherein the capped bottles are manipulated so that the sediment settles on the cap with the bottle in an upside-down position. The wine with sediment in the neck of the bottle is frozen, the cap is removed, and pressure in the bottle pushes out the ice plug with sediment. A portion of wine is then added back to fill the bottle to the proper level, and a new crown-cap is attached.

Disgorging is a more time consuming and man-power intensive procedure, but can remove essentially all of the sediment produced in bottle during completion of the primary fermentation. Like most wines in France, many ancestral method wines are governed by local appellation rules, and the majority of Pét-Nat is declassified as basic Vin de France. However, winemakers in the tradition-rich Montlouis-sur-Loire region, inspired by Pét-Nat’s growing popularity, created a new sparkling wine appellation called “pétillant originel.” (The word “natural” is banned from French wine labels). The key regulations include no added sugar or yeast, nine months of aging on the lees, and mandatory disgorgement.

While working on this Pét-Nat post, I endeavored to gain information from several Texas winemakers about their efforts to produce these sparkling wines. It has been well-publicized that Chris Brundrett at William Chris Vineyards started experimenting with Pét-Nat five years ago. After some early issues, Pét-Nat has become an important part of the William Chris portfolio. Todd Crowell at Ron Yates has also been working on Pét-Nat, producing several versions over the past few years. Silouan Bradford at Saint Tryphon Farm & Vineyards produces a Pét-Nat that is disgorged to remove sediment before bottling, like the Montlouis-sur-Loire French sparklers. A fun discussion with winemaker Rob Nida highlighted the free-flowing, experimental, and often unpredictable nature of Pét-Nat production as key reasons to explore and enjoy this style of wine. 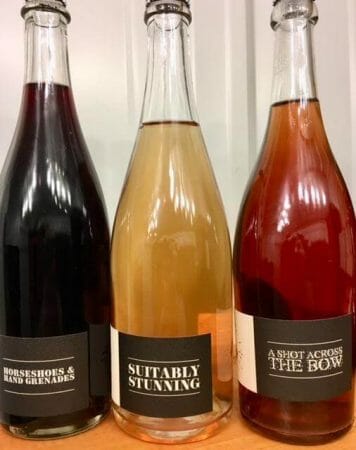 Sparkling wines produced by Regan Meador from Southold Farm + Cellar. The bottle in the center is actually a méthode traditionnelle sparkling wine sealed with crown cap like the Pét-Nats on either side.

Some of the best information on Pét-Nat came from a discussion with Regan Meador of Southold Farm + Cellar. Regan began making Pét-Nat wines on Long Island before moving recently to the Texas Hill Country. He pointed out that making Pét-Nat can often be an adventure since each new batch will likely be different from the last. Bottling Pét-Nat can be an interesting adventure since fermentation is still underway while bottling proceeds. The changes occurring continuously in the live, natural wine can result in noticeable differences between the first bottles and the last bottles in a run. Therefore, bottling becomes a time-sensitive issue, no matter whether it is 3:00 p.m., or more commonly 3:00 a.m. LOL This must be exciting and stressful for a winemaker, and should certainly add some interest for us as consumers. 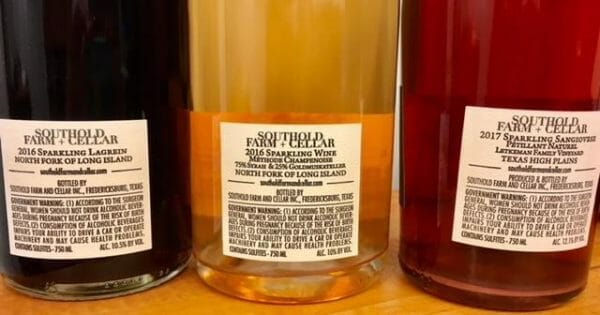 Pét-Nat wines can be produced from any grape variety, like Lagrein (left) and Sangiovese (right) – by Regan Meador from Southold Farm + Cellar

So, after all the research (and tasting, of course), where do we stand on Pét-Nat? We know it is produced by bottling the wine before primary fermentation is completed. No additional sugars or yeast are added before bottling. The carbon dioxide bubbles and pressure are formed naturally as sugar that remains in the bottle is fermented by active yeast cells still in the bottle. Pét-Nat can be made from most any grape variety, normally from a single vintage. Pét-Nat wines are often cloudy or hazy due to fermentation sediment remaining in the bottle. However, part or all of the sediment may be removed via various techniques before final capping and release of the wine. Pét-Nat is a fun and exciting sparkling wine that often surprises us, and as many folks have pointed out, it really tastes like grapes.

A number of references were consulted in creating this post on Pét-Nat.

What Is Pét-Nat Wine? An Ancient Winemaking Style on the Rise, by Justin Kennedy, Oct-2015

What is a Pét-nat Wine?, by Vicki Denig

Making it (Pét-Nat) / 2014, by Tim, Dec-2014 (AstroBunny) [This was an interesting and informative step-by-step story on actually producing a Pét-Nat wine in Australia – a good read with lots of facts and photos.]