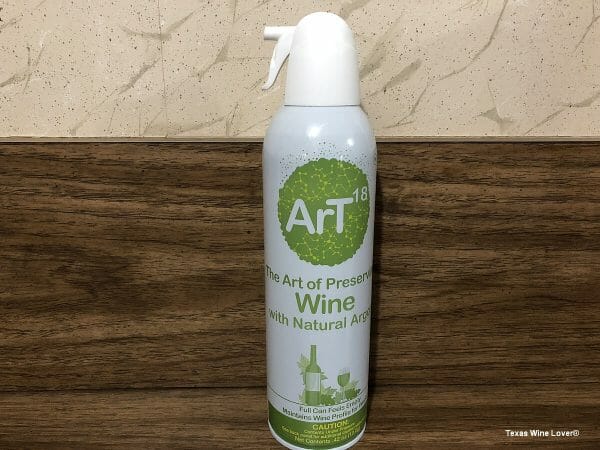 ArT, which stands for Argon Technology, is a can of argon gas. Since argon is denser than air, the argon sits on top of the wine in the wine bottle preventing air from oxidizing the wine. Founder Ryan Frederickson discovered there was a lot of wine being dumped because the open bottles of wine were oxidized after a few days. The ArT website says that every year 1.27 billion dollars of wine goes down the drain at home, plus 18+ million bottles at restaurants. So, their goal is to prevent waste. The first successful version of the ArT wine preserver was launched in December 2016.

Since the can contains gas, it feels like it is empty. But no worries, the gas is there ready to go to work. One can will preserve up to 50 bottles of wine, and the recommended method of using it is to spray two seconds of the pure argon into the open bottle and re-cork the bottle. For tasting rooms and restaurants, they recommend spraying the opened bottles at the end of the shift. However, for best results and for bottles that need 7+ days of preservation, they recommend pouring the glasses of wine, and then following the directions on the can within the first few minutes.

The ArT website states the preservation works up to weeks, and one page specifically says 14+ days. When I emailed founder Ryan Frederickson, he said it will preserve almost any wine for 7 days like new, and most for up to 14 days.

It was now time to test the ArT wine preservation system. Most wine lovers who have walked through their favorite wine store, may have seen a similar gas can called Private Reserve. The concept is the same, but Private Reserve uses the inert gasses nitrogen, carbon dioxide, and argon. The cans are also very similar with warnings and statements on the can. Since we already had a can of Private Reserve at home, I decided to do a side by side test between ArT and Private Reserve. 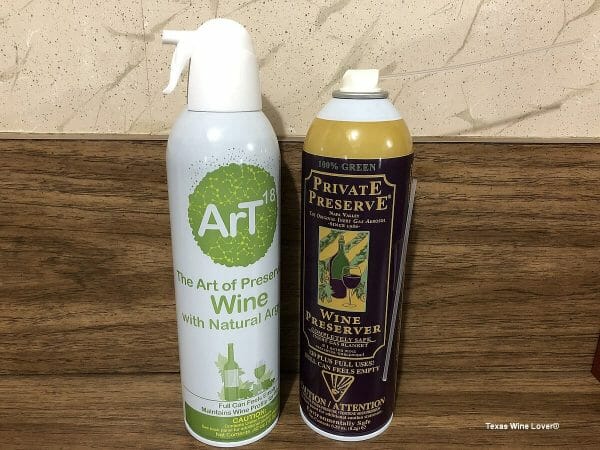 The next task was to find the wine to use for the test. I chose the 2015 Rhône Valley red wine by Domaine de la Presidente from the Côtes du Rhône appellation. Since the previous Repour test was done for almost seven weeks, I decided to push this test a little more than the seven days “like new.” I bought enough of the same wine to cover the multiple days of testing we were going to do.

At the start of the test, I opened three bottles of wine. All three were compared to ensure there were no faults and to know the taste of a freshly opened bottle of the wine. I then used ArT in one bottle, Private Reserve in another, and enjoyed drinking the third bottle. Yes, life is sometimes tough.

The next step took place three days later. I opened the two bottles that had been preserved along with another unopened bottle of the wine, and poured the exact same amount of wine into three glasses. I then preserved the previously preserved bottles once again with the same preserver that had been used for the specific bottle. This time I had Gloria help test the results since she has an excellent nose and palate. After comparing all three glasses, neither one of us could detect a difference. So far, so good.

Seven days later was the next part of the test. This was the point the ArT was supposed to be like new. I did the same opening of the previous preserved bottles and another unopened bottle of wine. Again, Gloria helped with the test. This time the ArT preserved wine had a funky smell described as moldy and musty. The taste was described as having a little pasty mouthfeel. The Private Reserve preserved wine did not exhibit any differences with smell or taste compared to the newly opened bottle of wine.

At this time, I could have called the test over, but since I had bought one more bottle of the wine, I decided to finish the test with the last step. I originally had planned to go 14 days, but we had two couples come over for dinner, and of course drink wine, at the 11 day mark. I decided to do the test then so I could include the views of six people.

Once again, the same process of wine was poured, and each couple shared three glasses of wine. Interestingly, everybody was unanimous with the same decisions. The first comment made was the freshly opened bottle was the best. The next comment was the ArT wine had lost both its nose and taste. The Private Reserve wine was drinkable, but it had already started to lose its freshness.

Now that the test is complete, what is our decision? If you are going to preserve a bottle of wine for a few days, then either the ArT or Private Reserve will work fine. If you want to preserve a bottle for weeks, then nothing yet we have tried compares to the Repour or zzysh wine preservation systems.