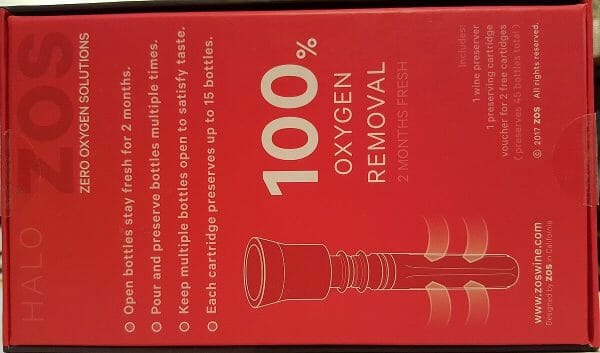 I was eager for that magical way to keep wine fresh for more than two days without dropping the big bucks on a Coravin, so when an ad for a new product came across my Facebook feed, I was intrigued. The ZOS Halo (zero oxygen system) launched a Kickstarter campaign in spring 2017, and I decided that the starter kit which included two additional cartridges was worth an investment of $45. (Current retail price is $74.95 and replacement cartridges are $14.95 for a two-pack)

The ZOS Halo is a stopper with a glass top that lights up one of three colors to indicate whether it is working properly. The stopper has a cartridge that you screw into the housing which houses crystals to absorb all of the oxygen out of your bottle. I liked the idea of removing oxygen from my wine bottle without introducing a gas. Having used the Coravin extensively at work, I was also looking to avoid that “oil slick” look that occasionally appears on the top of the wine as well.

You can supposedly get up to two months of fresh wine with the stopper firmly in place and in proper working order. The company claims that the stopper can be removed and reinserted, and that each cartridge will last for five to fifteen bottles. I couldn’t wait to see if it lived up to the hype. 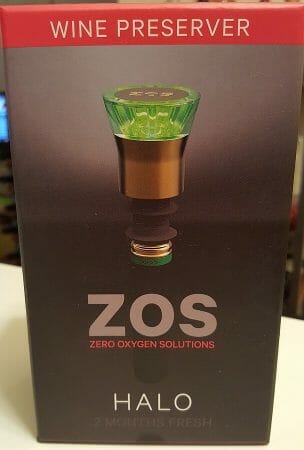 To start the experiment, I first had to decide on which wine to use. I have a fairly decent collection of special wines that would be wonderful to open and enjoy over the course of a month or two. They include a few special releases, magnums of 98-100 point wines, a Pinot Noir reserve collection from Sonoma that I would grab first in a house fire, and many of my luscious Texas babies.

But what if this new-fangled stopper didn’t work? Which wine would I be willing to “sacrifice?” More importantly, what if I chose a wine that was just a little too outside the box to make for a good experiment? (I tend to dabble in some oddball varietals and unknown regions that might shift and change on their own.)

I settled on a 2012 Beaulieu Vineyards Rutherford Cabernet Sauvignon for two reasons:

I opened the package and read all of the instructions. This is not as easy as simply popping a cartridge onto the stopper and sticking it into the bottle. The company stresses the importance of not letting the cartridge be in contact with air for any length of time. It is designed to absorb oxygen so leaving it unsealed and lying on the counter even for a few minutes will destroy its capabilities. 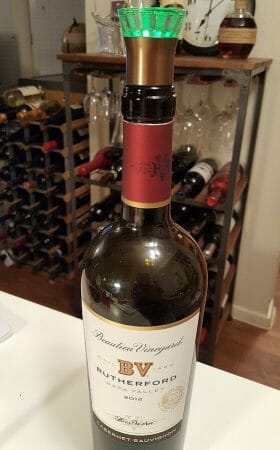 After getting the batteries into the glass top, I shook up a cartridge in its plastic container to activate the absorption crystals. Once it is attached to the top, it must be placed in a tester tube to verify it is ready to use. The top will flash alternating green and red lights, and if it ends on a steady green light, you are ready to begin.

My husband and I opened the wine and found exactly what we were expecting: deep ruby red color; aromas of dark cherry, currant, violets, leather, and oak flavors that led to faint smokiness, and palatable “Rutherford dust.” 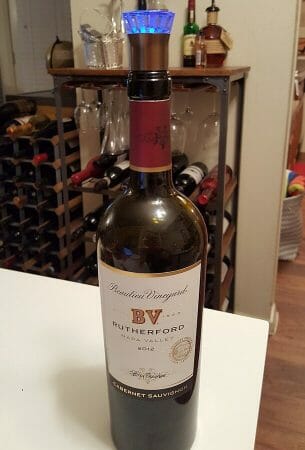 I tested the stopper one more time to make certain it was a steady green, placed it firmly into the bottle and waited for it to turn blue which is an indication that everything is working. The bottle should be stored upright, and if it is moved at all, the blue light will flash. (If the red light flashes, it is an indication that the cartridge needs to be replaced)

The wine still tasted very good. The berry flavors seemed a little muted but the wine did not taste spoiled.

The wine still had that deep ruby red color, but there was a shift in the taste. Within the first minute of pouring, more smokiness seemed evident, the berry flavors were greatly diminished, and there was something like a sour or dank taste. I let the glass sit while I dealt with a new problem with the stopper.

The stopper had turned red when reinserted into the bottle. I took it out and shook it for 10 seconds to reactivate the cartridge. I used the tester to get the green and red flashing lights, and when it remained steadily green, I reinserted the stopper and waited for the blue light.

Meanwhile, the wine sat in the glass for about 10 minutes. At that point, the dankness had disappeared, but the wine showed more of the earthy, dusty, smoke, and leather notes. It didn’t taste ruined, but it was clearly different. 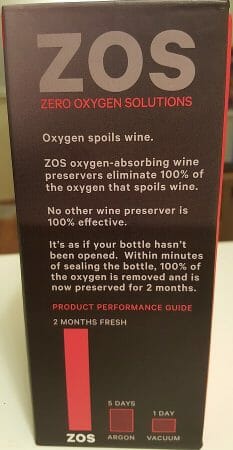 The wine was very different. We detected a chemical or metallic aftertaste. Again, a little time in the glass changed the wine. At the five minute mark, the aromas seemed to be intact, the flavors were similar to test three, but significantly less of the Rutherford dust. A few more minutes invited back some of the berry flavors. But overall, the wine was not drinkable. It was no longer the BV Rutherford of five weeks earlier, and the cartridge appeared to be finished. In the test holder, the red light stayed illuminated despite several attempts to revive the absorption crystals.

So why didn’t my wine last two months (or the five to fifteen bottles the website claims)? It’s hard to know. I could not find any current reviews of this product from a consumer. The company website has a list of FAQs, but none seemed to address my problem. Had I used the stopper incorrectly? Did I use it correctly, but simply had a defective cartridge? I’ll need a second test to answer that one.

Overall, I think this product did well for the first week. I could see the value of using it if I opened a nice bottle that I could not finish in one or two sittings but wanted to finish within a two week period. Perhaps if I hadn’t opened it at all after that first glass, it would have lasted a full two months. I also think it kept the wine fresher than the pump air removal systems for the one week test. For the long haul, I’m not ready to commit it to one of my treasures. One drawback of this over a Coravin is that the stopper can only be used in one bottle at a time. (Of course, we are welcome to purchase multiple stoppers to overcome that problem)

I’ll try this product again, but if I have the same issues with the cartridge failing so quickly, there will be no romance here. Now, if only Santa would bring me a Coravin.

Kimberly Martin lives in Grapevine, Texas. Wine is a second career for her and a great choice over the 25 years she spent in politics. Kimberly currently holds an Introductory Sommelier certificate and is close to completing the Certified Specialist of Wine (CSW) program. She works as a Wine Specialist at Total Wine & More in Lewisville. Her husband Andrew Martin enjoys helping her with her wine tasting homework as often as he can.

For two wine preservation systems we reviewed that work very well, please check out the Zzysh Preservation System and Repour.