Van Alstyne, Texas is now proud to join the many, fun small Texas towns who can proudly state, “We have a winery in our town!” Located just a tad more than 40 miles directly north of Dallas (in the Texoma AVA), and immediately near its Highway 75 exit, you will find the Cooley Bay Winery and its signature drink, “The Cooley,” and a nice balance of traditional Texas wines as well as some lovely fruit wines. 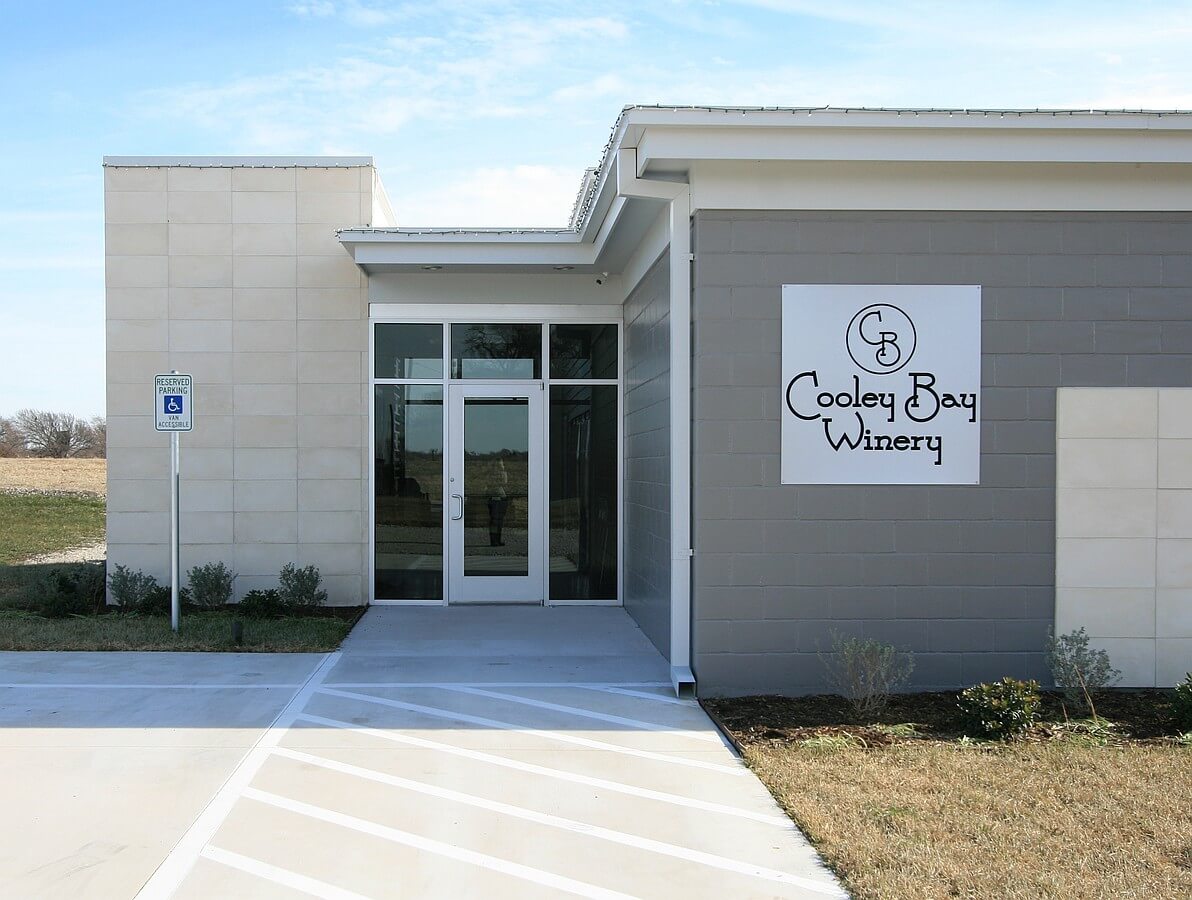 Owner Tom Busch, began pursuing his dream to bring his specialty drink to the market in 2014. While completing his Enology Certificate Program at Grayson College, he was ambitious and thought he could get his doors opened in plus or minus one year, but he shared with me as he began his journey into the world of developing what is now a thriving winery, he realistically needed two years to get it all done to suit his very detailed goals and plans. He also began to develop a love of the wine world itself, especially the Texas winemaking community. This led him to expand his business plan beyond his “Cooley” idea because he realized he wanted to provide his customers with traditional wine styles as well. He officially opened for business October 28, 2017 and hasn’t had time to look back because he is a very busy winery owner now.

My husband and I spent about an hour at Cooley Bay on Grand Opening Day. It was packed. Terrific live music, awesome BBQ from a local food truck, a beautiful fall afternoon, plus plus plus. You couldn’t have asked for a better day. Both outdoor patios were overflowing, the indoor seating and tables were full, the huge loft style doors were opened to the outside, and the vibe was really fun. Of course, we tasted everything (all ten testing opportunities). My favorites were the Dry White blend, Moscato, Ruby Cabernet, and Tempranillo. Now I’m a dry wine drinker, so that explains why I just listed three out of four dry wines as my favorite. The Moscato was as lovely as any great Moscato should be. I predict this will be one of Tom’s best sellers, in addition to his fruit wines. We tried both the Blackberry and Strawberry. Next time I whip up a blueberry topped cheesecake, I’ll be picking up some Moscato and probably some Blackberry wine to have fun pairing with cheesecake (I suspect some of the blackberry wine will make its way into the actual blueberry topping on my cheesecake during preparations). 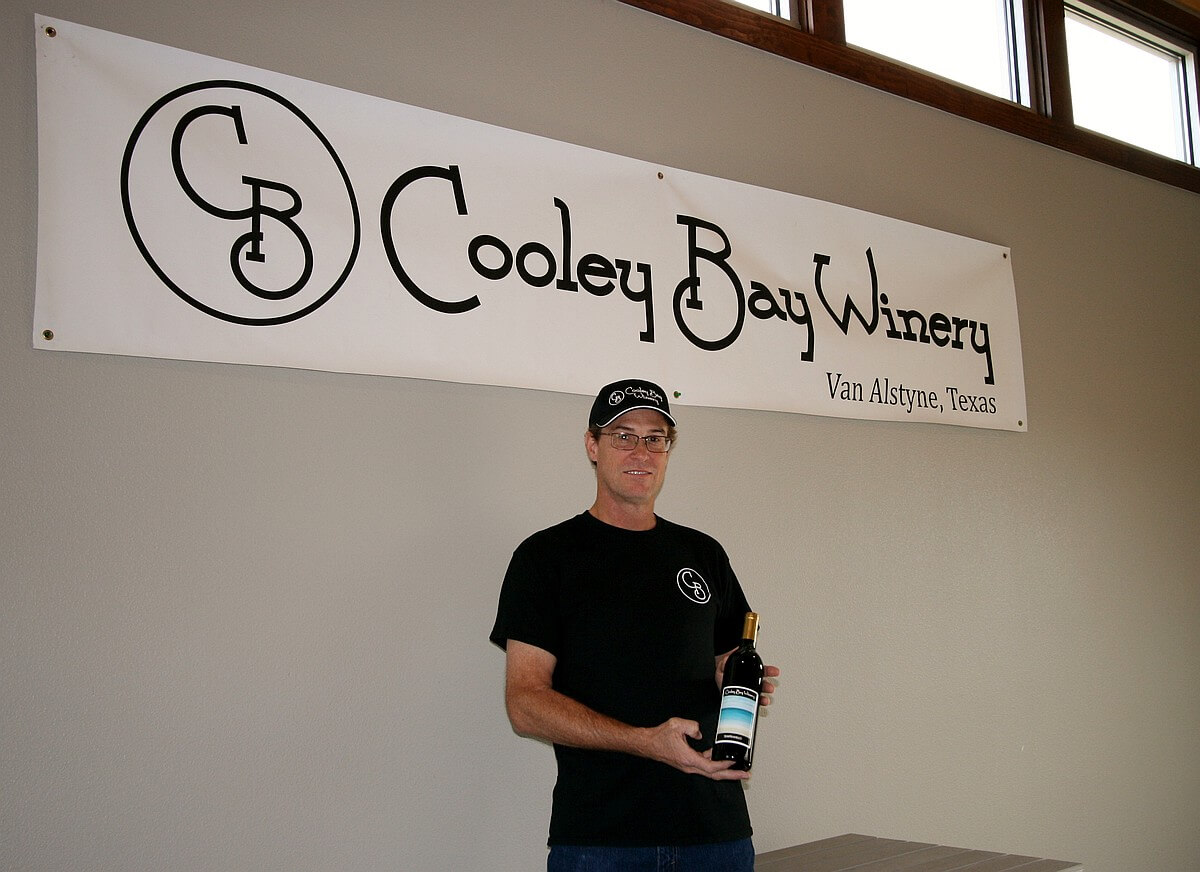 Recently, I made a return visit to Cooley Bay and had the opportunity to sit down with Tom and visit more in depth about his vision, future plans for the winery, and its anticipated growth. Tom generously opened his doors an hour early for me to make a private visit to the winery. He has a superb location and plenty of space to get some vines in the ground in the future. He is considering planting some vines on the winery property, but also developing some of his nearby farm land as a vineyard in the future so he can produce Texoma AVA wines, in addition to the Texas traditional wines (High Plains) he now serves along with his fruit wines and the Cooley.

You are waiting for the reveal about The Cooley, right? Quoting directly from the menu: “the Cooley is a fruit wine based beverage served cold and carbonated on tap and crafted with special ingredients that will provide your palate with a surprisingly smooth and refreshing experience. This specialty drink is formulated with no artificial colors and is the hallmark drink of Cooley Bay Winery.”

I thoroughly enjoyed the Blackberry Cooley. The Strawberry Cooley was tasty as well. And very soon Tom will be introducing Peach and Cherry Cooleys because the customer response has been terrific. Essentially, this refreshing wine beverage comes from a custom keg. It’s clever. Recently Tom and some of his team attended the Holiday Wine Stroll and Taste of Bonham. This was a four hour event, but before three hours was up, he was sold out of “the Cooley.”

When you stop to enjoy a tasting, you’ll be able to enjoy locally made sausages with imported cheese if you’d like, or some great roasted red pepper hummus and pretzel chips. In the future, one of the local sausage manufacturers will be producing a custom white wine sausage for Cooley Bay. 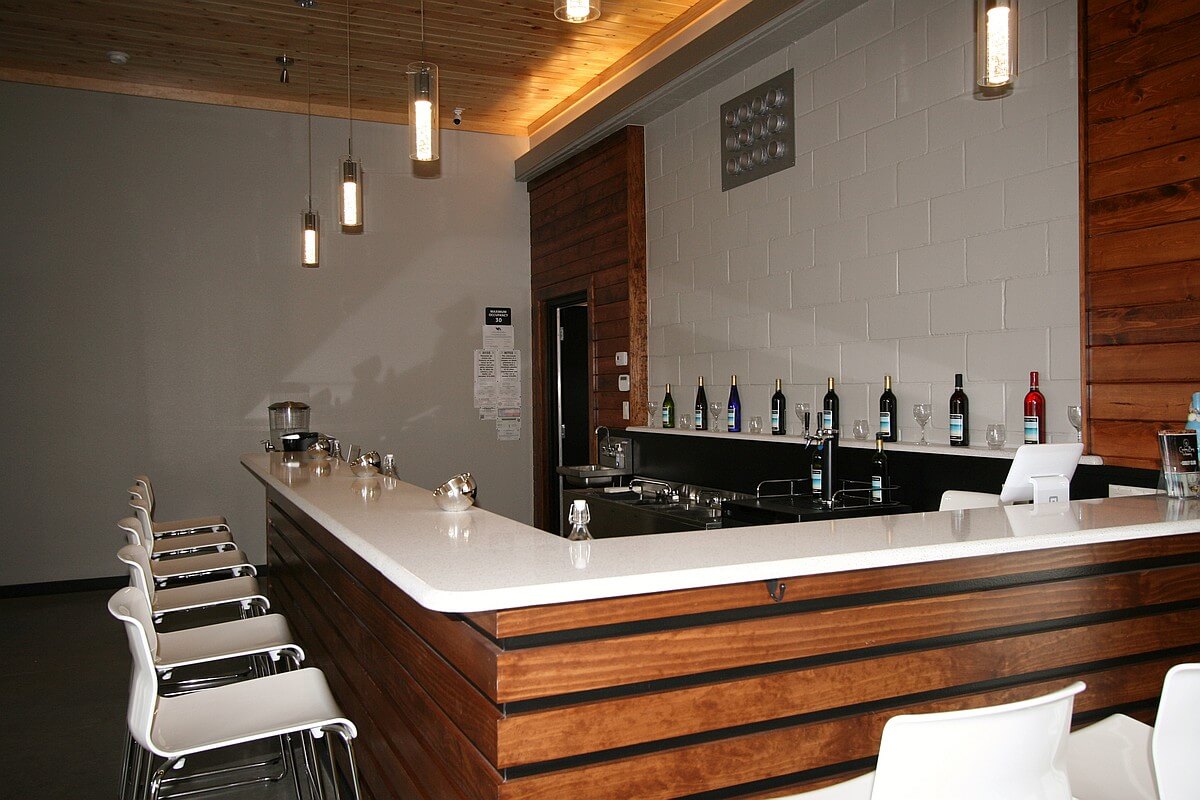 The facility is contemporary. Not quite what some might call “loft” style, it’s very well done. The tasting bar, offices, and production spaces are housed in what used to be a Southwestern Bell Tower service building. The tower is long since gone, but the building repurpose and renovation is sharp. Tom expanded to the east of the building by using a glass and frame garage door, big bricks and mortar, some sleek tiling accents, and polished concrete.

Local organizations have already discovered they love to host private events in the large seating area at Cooley Bay. In an effort to engage more and offer more to their customers, the winery has enjoyed two sold out “Get Crafty” Sundays at the winery, where they supply the materials to get creative with wine bottles.

It’s terrific to see a new winery enjoying success right out of the gate as well as a willingness to try new ideas and host clever events to engage with their customers. For his next challenge, Tom Busch is working on an innovative way to distribute “the Cooley” without compromising the freshness delivered at the tasting room. “People are asking for it,” he told me. We shall report back on his progress. Be sure to enjoy a stop at Cooley Bay next time you are wine touring North of Dallas. Cooley Bay is a wonderful addition to the collection of thriving wineries you’ll encounter while exploring the constantly growing list of wineries north of Dallas in Texomaland.