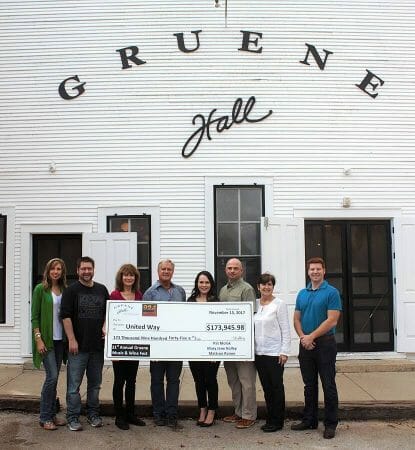 As we reported before, the Gruene Music & Wine Festival was held from October 5-8 this year. The 2017 festival was record-breaking which allowed the Gruene Hall and KNBT 92.1 FM with sponsors donate a combined $173,945.98 to United Way. $143,741.12 of the proceeds were from festival events while the remaining $30,204.86 of proceeds came from the October 8th event, and were donated to the United Way of the Coastal Bend to aid in Harvey disaster relief.

The Gruene Music & Wine Festival is held annually at The Grapevine and Gruene Hall in Gruene Historic District, and features the best in live music, food, wine, and beer.

Gruene Hall owner Pat Molak said, “After seeing the devastation throughout the state of Texas, we really wanted to be able to do something to help.  Donating to the United Way of the Coastal Bend will allow some of the proceeds to go directly to cities like Port Aransas, Aransas Pass, and Rockport that were hit hard.” The United Way of the Coastal Bend will distribute funds directly to trusted partners providing relief support to storm victims, and to aid in long-term rebuilding efforts.

Please visit www.gruenemusicandwinefest.org for more information on the event.

Texas Wine Lover would also like to thank our advertisers on the website for helping make our independent journalism for the Texas wine community possible!