A great way to get involved in the Texas Wine Industry

It was totally dark during the drive from Fredericksburg to CALAIS Winery located between Hye and Johnson City, Texas. My normal routine does not involve such early morning activity, but today was special. I had volunteered to help Ben CALAIS with his 2015 Cabernet Sauvignon from Newsom Vineyards fruit that, after aging in French oak barrels for nearly two years, was ready for bottling. Two vehicles were already parked in front of the winery, Ben’s pickup and Sarah Heath’s car. Sarah is a regular crew member at CALAIS Winery and was helping to set up for the bottling run. As the sun began to lift the Texas Hill Country from darkness, I unloaded an ice chest with water and orange juice, and a bag with donuts, croissants, cheese, and crackers that might help folks get off to a better start for the day.

Inside the winery a Flextank tote (1,000 liters, I believe) containing a portion of the Cabernet Sauvignon was positioned adjacent to a stack of pallets with the heavy, dark brownish green bottles that would be used. Next in line was the filling unit which would gravity feed wine into six bottles at a time. The finishing section was located next, with the corking unit and labeler sitting on a large stainless-steel table. At the end of this table was an empty pallet onto which would be stacked the case boxes, each containing 12 filled, corked, and labeled bottles of wine. This is a common sight at many smaller wineries around Texas, and the rest of the wine world, for that matter – a mini-assembly line ready to be manned by winery staff and volunteers. 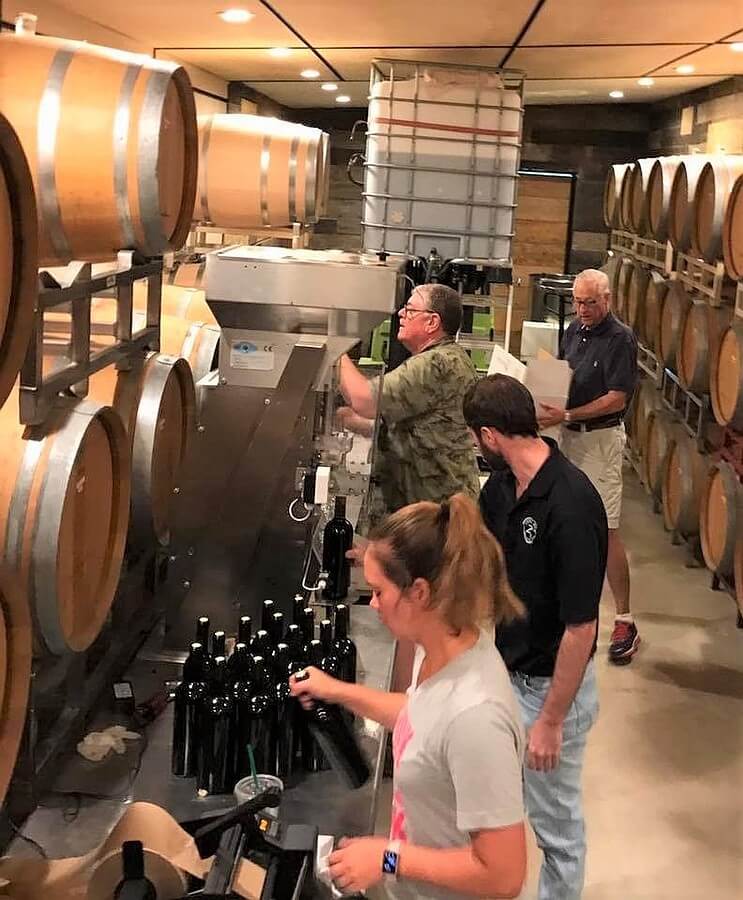 From front to back: Sarah, Tyler, Carl, and Rob

Other members of the crew began to gather, including two more volunteers, and Sheri Pattillo, a second regular crew member at CALAIS Winery. Soon the tote of wine was raised to the ceiling on the forklift and a feeder hose was connected from the bottom valve on the tote to the opening on the bottle filler reservoir. This arrangement would provide ample gravity feed for the wine into the bottle filler, avoiding the need for a pump. Fresh corks were introduced to the corking unit using latex gloves so as not to introduce contamination to the machine or corks. A large roll of labels was threaded into the labeler and the first case of empty bottles was dumped from their box, standing ready for their turn on the bottle filler. Everyone chose and took a position. It was all kind of exciting as if we were jockeys readying our respective steeds for a run down the track. Then, all of a sudden, without benefit of a trumpet call to the gate, the bottling run was underway. 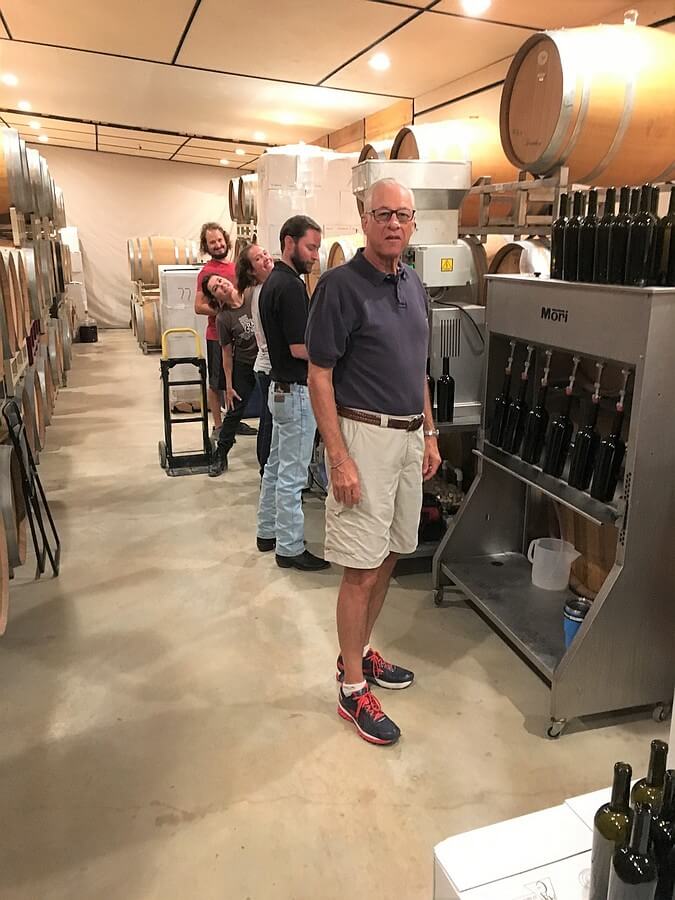 From Left to Right: Ben, Sheri, Sarah, Tyler, and Rob

Empty bottles were positioned, two at a time, under the filling spouts and lifted to open the spring-activated valves that would release the flow of wine from the reservoir into the bottles. When all six filler spouts were fitted with bottles, it was then a matter of waiting until the first two bottles were filled to the appropriate level with wine. The filled bottles were lifted and then pulled away from the unit and placed onto the table next to the corking machine. As bottles were removed from the filler unit, the spring-activated valves stopped the flow of wine until opened again with the next set of bottles. Assuming all the valves operated at a similar rate, the action became relatively routine as each pair of bottles, now filled, was removed from the unit to be replaced by another pair inserted under the filling spouts. 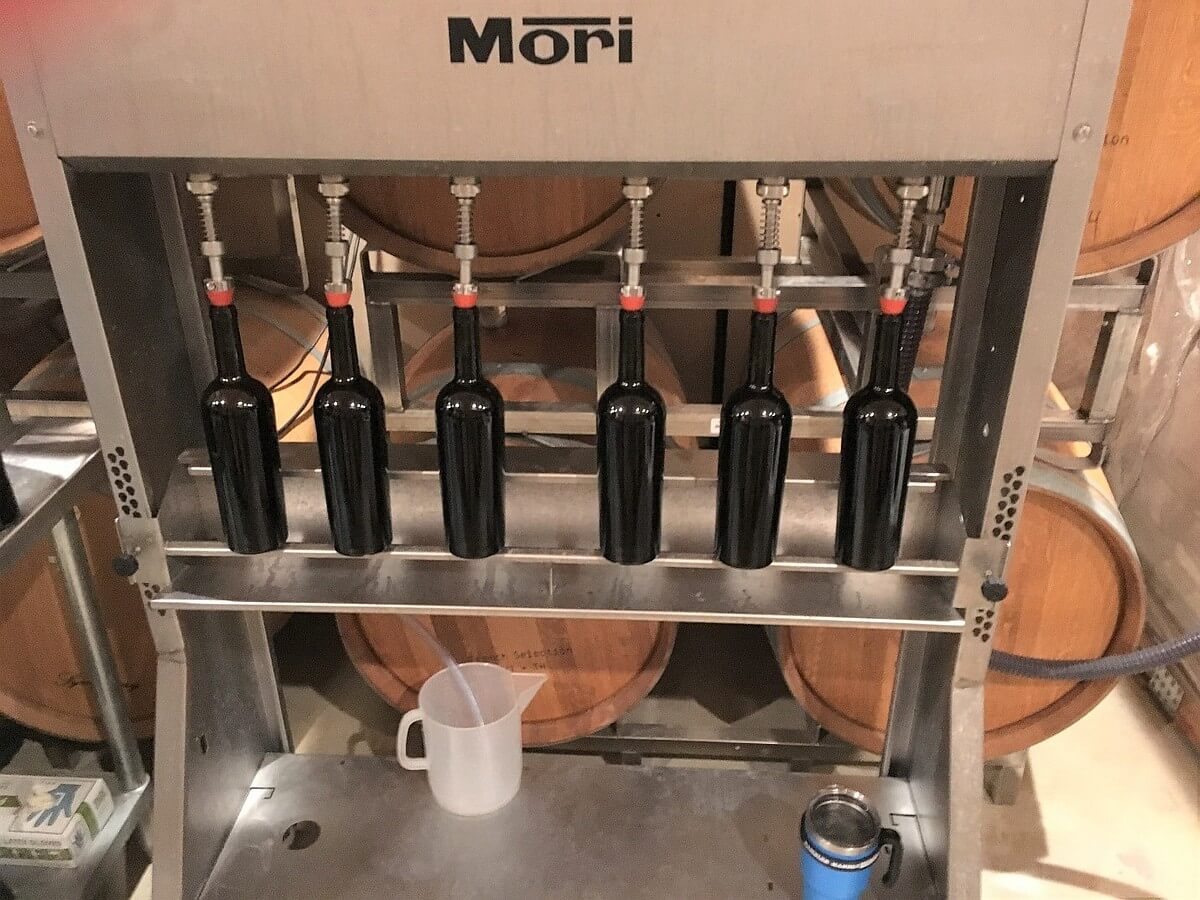 The filled bottles of wine were then positioned, one at a time, under the corker unit. The bottle was pushed back into the rounded cut-out guide plate where a cork sleeve was positioned over the top of the bottle. Concurrent with the motion of pushing the bottle into position, a switch was activated prompting a metal rod to push the cork from the sleeve into the neck of the bottle. The machine then fed a new cork into the sleeve, ready for the next bottle. The corked bottle was released so that it could be removed from the unit and handed off to the person manning the labeler.

For this bottling run, Sarah was asked to handle labeling duties. The bottles being used were relatively heavy glass with a slightly sloped profile where the shoulder of the bottle was wider than the bottom. This required a particularly deft hand at positioning the bottles in the labeler so that once the adhesive label was “rolled” onto the bottle, it would be straight and “square with the world.” Sarah managed this job extremely well. 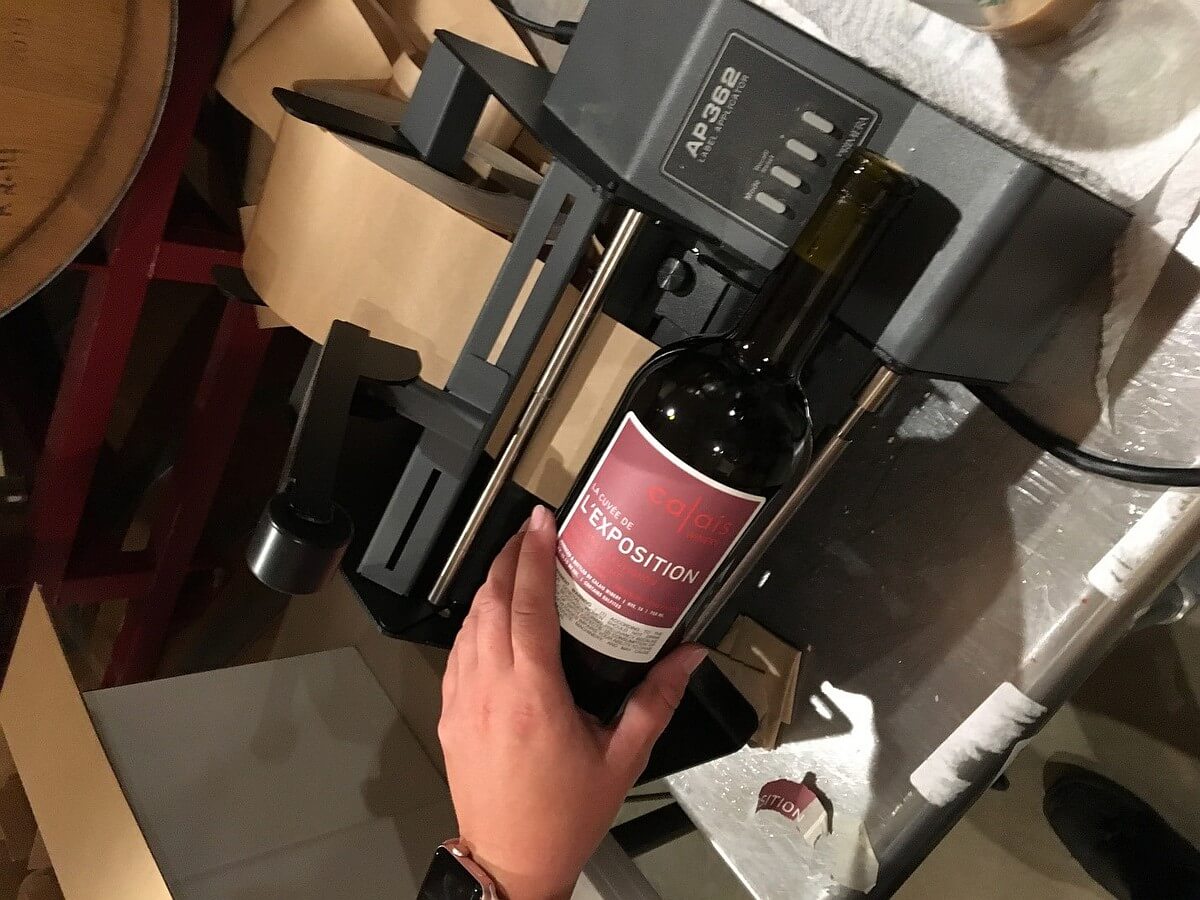 Once labeled, the bottles were placed into the case boxes that previously held the empty bottles. Thus, there was a steady procession of cardboard boxes moving from one end of the assembly line to the other. As the boxes came back to the packing area, they were labeled with the type of wine, vintage, and numbered in sequence. After each box was loaded with filled bottles, it was stacked onto the pallet. Eventually the pallet was loaded with boxes, 11 to each layer and six layers high (as best I recall). The entire pallet load was then encased in stretch plastic wrap to improve stability during subsequent maneuvering of the pallet with a pallet jack or forklift. Tilting over or spilling a pallet of wine is not a fun experience, and one that can certainly be expensive.

Now that each step on the little assembly line has been described, now it is time to tell about small issues that would arise throughout the run. For starters, the sloped-shouldered bottles tended to wobble as they were dumped, bottoms down, from the box. This made each stand of 12 bottles a bit precarious. This meant that the person dumping the bottles had to pay particular attention as the box was removed from the stand of bottles. Luckily, only once did some bottles fall, but none were broken. I guess the heavy glass chosen had some extra value at this point.

Another interesting issue that developed related to one of the filling spouts that operated at a slightly slower rate than the other five. Early in the run, bottles that were not completely filled were sometimes removed from this spout and handed off to the corker. It became critical that both the person doing the filling and the person on the corker each check the bottles to make sure they had an appropriate fill level.

The corker had an infrequent issue in that sometimes the rod would not push the cork completely into the neck of the bottle. When this happened, a small section of the cork would protrude, and had to be pushed down level with the top of the neck. And from what I could see, this usually required a significant amount of force from someone’s thumbs or fingers.

The morning shift for this bottling run began at about 7:15 a.m., and ended when the last of the wine in the Flextank was delivered at about 11:15. At this point, the volunteers took a break, drank water or orange juice, and had a chance to visit without paying careful attention to their assembly line duties. Each of the winery employees set about a more routine job that needed to be done. The pallets were maneuvered into more suitable spots in the limited space available. The Flextank and hose assembly were taken outside for cleaning. Sarah began to check the fermentation chemistry (specifically sugar level by density) on several batches of 2017 vintage white wines. And Ben had another project to do outside. 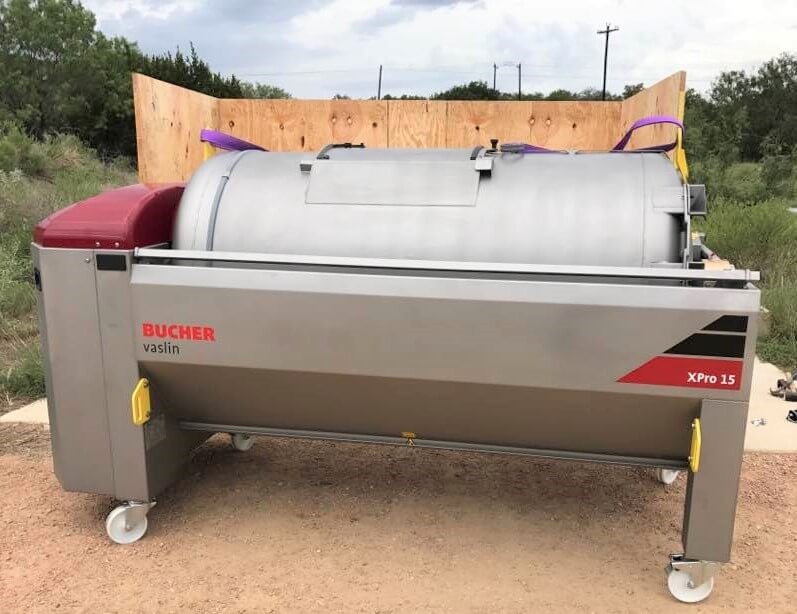 The day before this bottling run, a newly purchased pneumatic press had been delivered to CALAIS Winery and had been assembled up to a point. Stainless steel leg extensions had been manufactured for the press so that it could be elevated above other equipment used on the sloped crush pad extending down into the entrance of the winery. This elevated stance was designed to support gravity flow operations and minimize the need for or use of a pump. With some assistance, Ben used the forklift to raise the press so the leg extensions could be attached with appropriately sized bolts. When done, it was a thing of beauty!

While the press was being dealt with, more volunteers began to arrive for the afternoon shift. Sheri and a volunteer departed to Johnson City to pick up lunch for the crews. It had been a lot of fun so far, and the morning volunteers stayed around to visit with the newly arriving afternoon volunteers, and to get some lunch, of course. Finally, it was time to get the afternoon session underway and the steps leading up to the start of the morning bottling run were repeated. This time the wine was in two stainless steel variables, small cylindrical tanks with valves at the bottom. Each variable was on a pallet that would be lifted by the forklift, and then attached by hose to the bottle filler. The afternoon volunteers chose and took their positions, and the bottling run was once again underway.

It was at this point that my friend and fellow morning volunteer, Rob Reynolds, and I decided to visit nearby Ron Yates winery. There was no one in the beautifully appointed, newly opened tasting room when we arrived, but very quickly we noticed an ATV cart leaving the winery building headed our way. Dan Cook popped into the tasting room and told us to get in the vehicle because there was a fun tasting underway at the winery. We eagerly joined him and found quite a crew enjoying several bottles of wine in preparation for the fall allocation of the newly initiated Ron Yates Wine Club. In attendance were the following: proprietor Ron Yates, winemaker Todd Crowell, tasting room manager Dan Cook, and wine club manager Barry Nerios. We joined right in and tasted two different cuvees of Viognier, a Vermentino, a Cabernet Sauvignon-Merlot blend, and a luscious Pinot Noir from the well-known Dutton Ranch Vineyard in Russian River Valley. We enjoyed the tasting and had a wonderful visit with these great folks covering a wide range of wine related topics. Eventually, Rob and I decided to return to CALAIS Winery to check on progress of the afternoon bottling run. 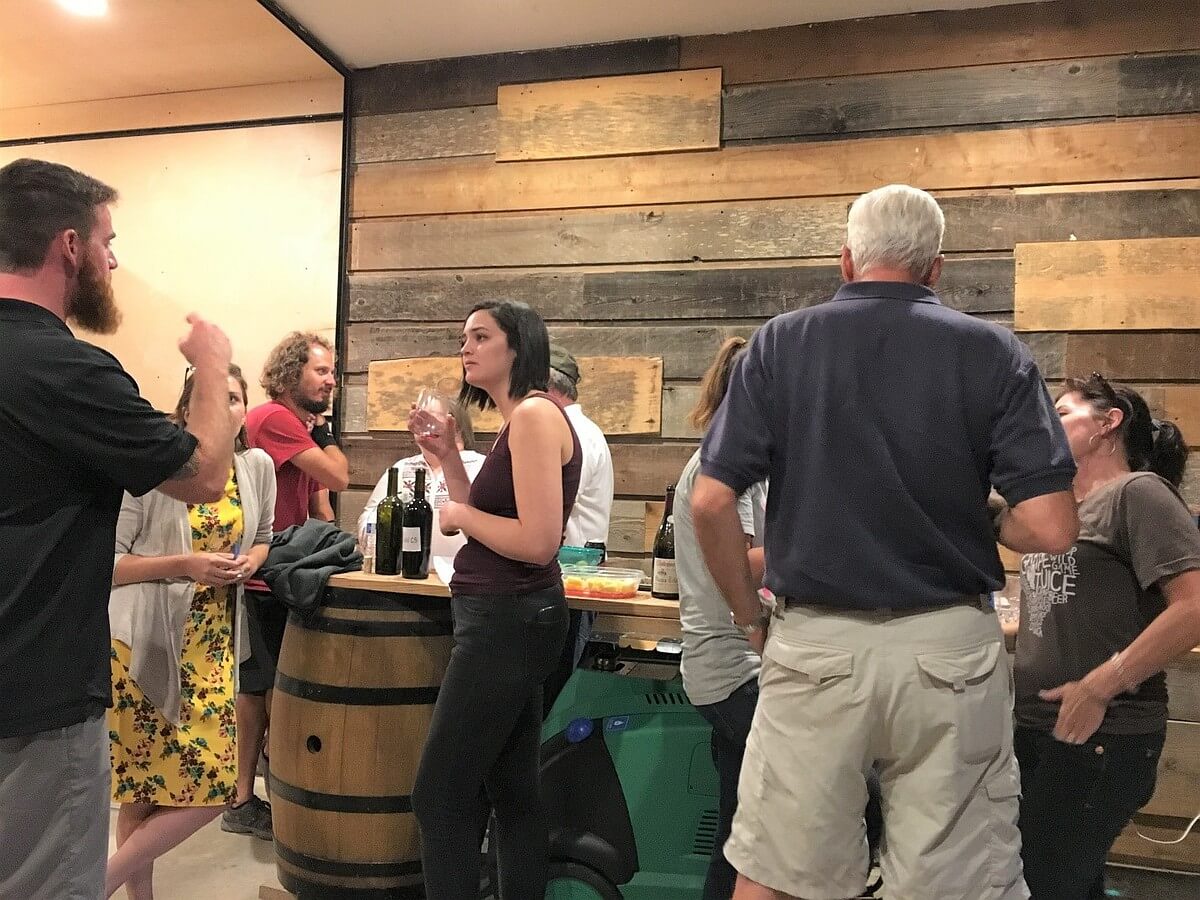 Sharing wine and conversation at the end of the day

It wasn’t long after our return that the last of the wine in the second variable was delivered to the filler unit and the last bottle was filled, corked, and labeled. At this point, the regular crew began the final cleanup steps while the volunteers, morning and afternoon (nine in all), visited with anticipation of enjoying some wine before ending the day. Several bottles were eventually opened and a number of spirited conversations ensued. This had been a great day filled with friends, new and old, and a great sense of accomplishment. I believe I can relay the sentiment of all the volunteers by saying that we were pleased to be asked to help, and were extremely happy that Ben had another of his delicious wines in bottle, ready for eager customers.

Being a bottling volunteer can be a wonderful opportunity to not only support our Texas Wine Industry, but to learn a lot more about the workings of a winery and the dedicated people who make this all happen. Thank you Ben Calais, Sheri Pattillo, and Sarah Heath.