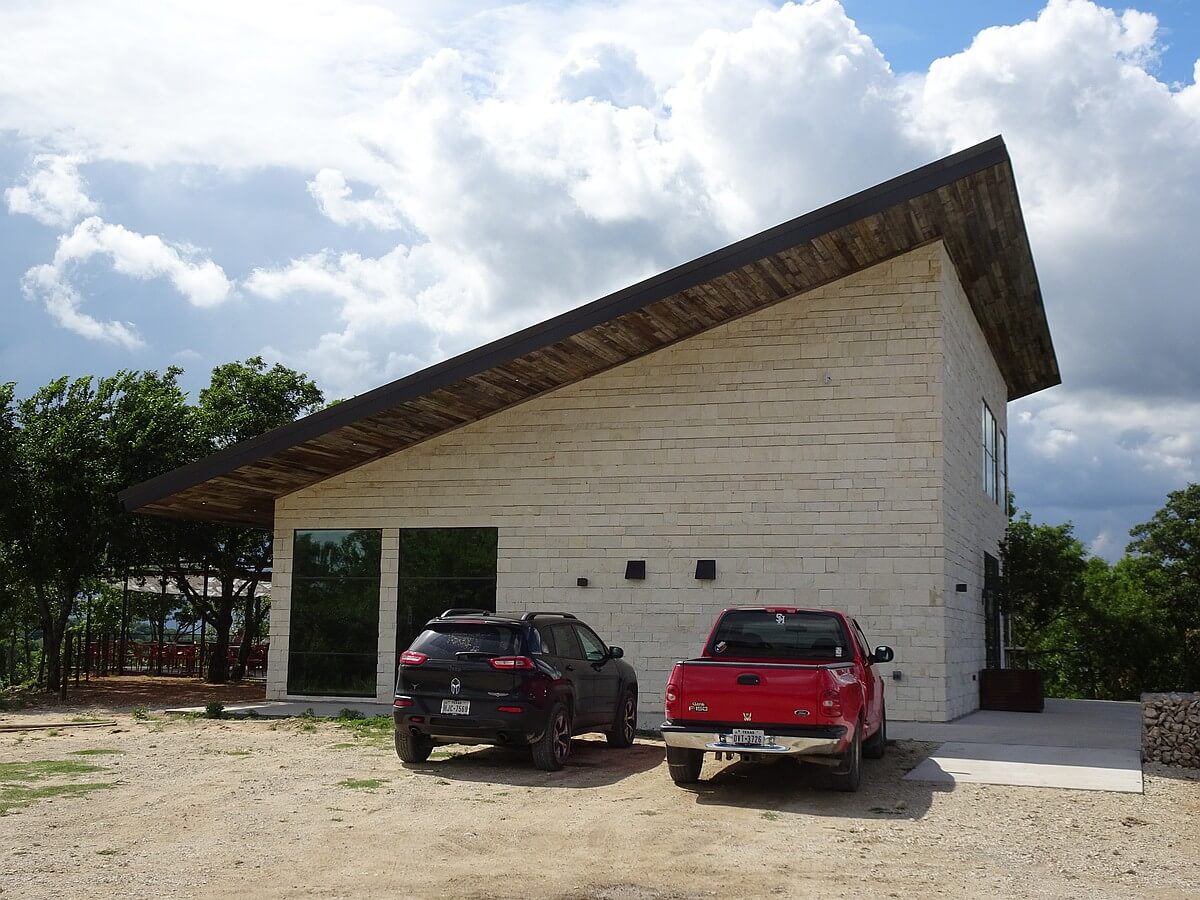 4R Ranch Vineyards and Winery is located in Muenster and is owned by the Roper family. The winery opened in November 2016. I first visited the location three years ago along with friend Dave Potter when we met co-owner Walt Roper. At that time, it was called Barnhaus Vineyards. Walt gave us a preview of where the winery was going to be and told us about their plans. It took longer than he had expected to open, but the difference between what Dave and I saw at that time, and what the winery looks like today is remarkable!

This visit also included visiting with a wine friend, Laurinda Thomas, and her mother. We followed each other down the long dirt road until we reached the entrance to the ranch. Then it was another trip up the entrance road past houses and barns until we reached the vineyard. On the left at that point is a small house called the Gasthaus which 4R Ranch has available for weekend rentals. 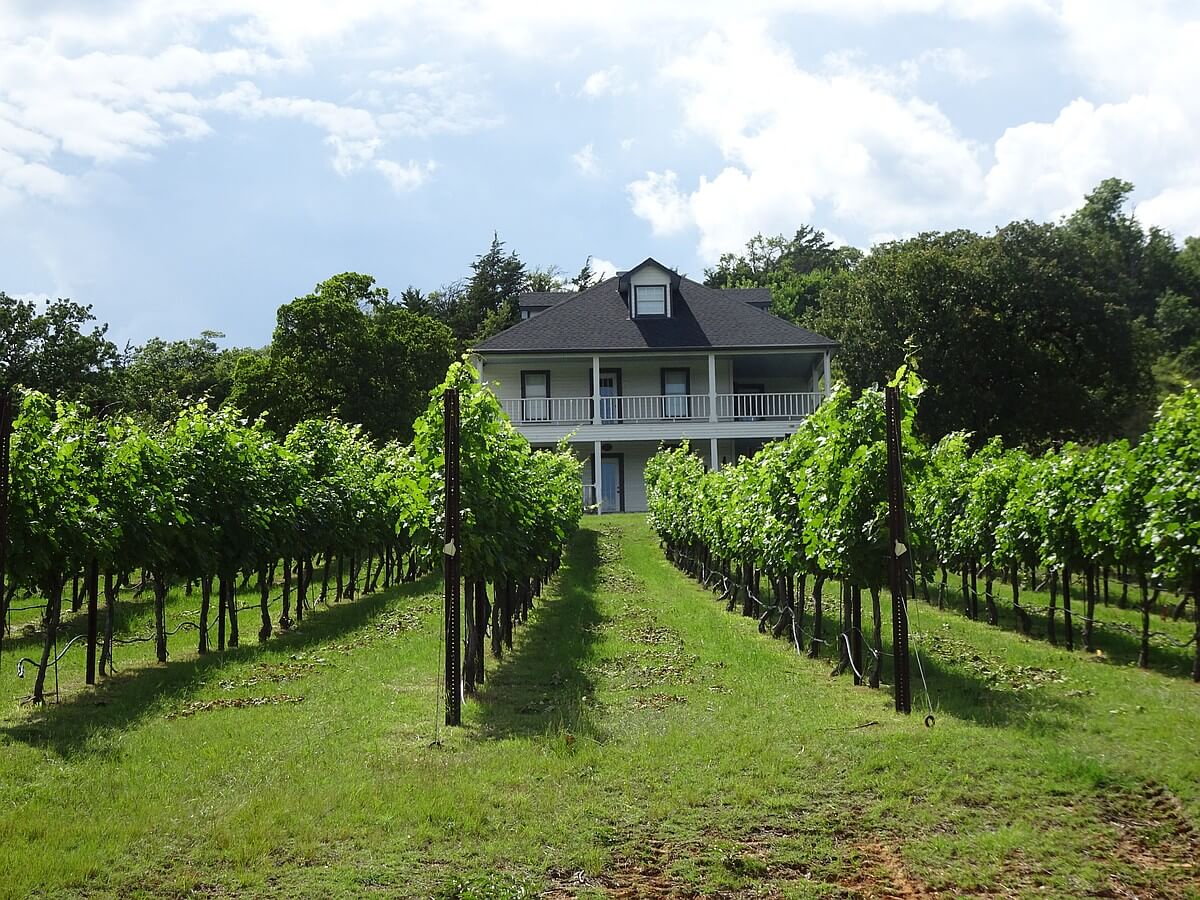 Turning right, you go past a vineyard with a stately house behind, and then it is up the hill until you reach the top where the tasting room is. Along the way, there is a turn to the left which goes to the production building, but the tasting room is to the right. It is a climb, but definitely worth it. 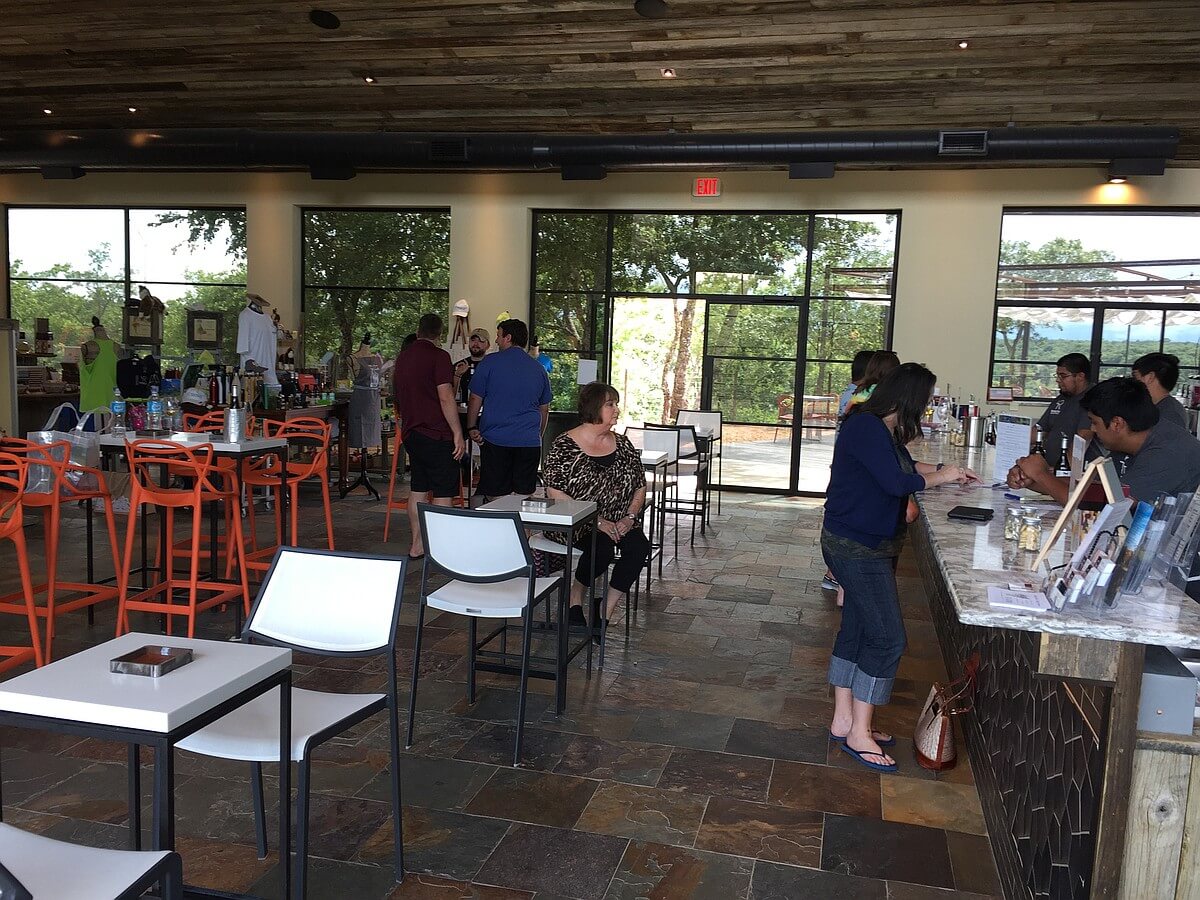 We went into the large tasting room, called the Wind Shed Tasting Room, and found a table to do a tasting. You can probably do a tasting while standing at the tasting bar, but a table is much nicer. While we were waiting, I checked out the rest of the facility. There is a very nice gift shop with all kinds of items for sale such as clothing, wine accessories, and many other gifts. The back door leads to a deck with a number of tables for enjoying a glass of wine while seated looking at the view. And what a view it is! 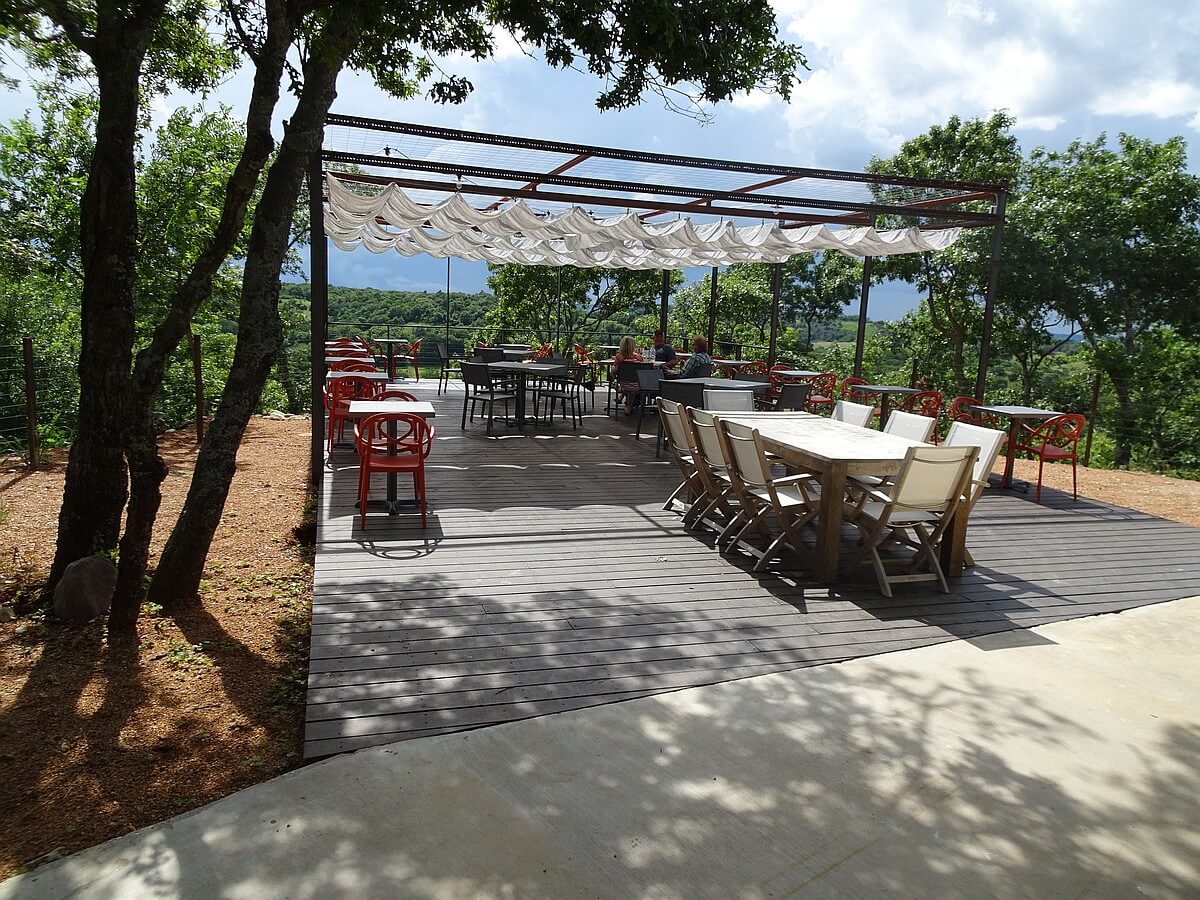 To the left in the distance, you can see the wind turbines which Dave and I had the chance to see up close on our first visit. And then it is a beautiful view of the countryside from any other direction you look providing a 270 degree view of the Red River Valley. During beautiful weather, I could definitely see grabbing a table and enjoying that view with a nice glass of wine.

Speaking of wine, back in the tasting room there is a large tasting menu from which to select a tasting. There are two, well really four, tasting flights from which to select. One flight is for three wines and the other is for five wines. You can then select one of those flights to be tasted in a 4R Ranch Riedel wine glass for a higher tasting fee. Each tasting is a two ounce pour, and as is getting common among some Texas wineries, the tastings are served in little vials in a wooden stand. This allows you to take your time doing a tasting and also gives the winery’s staff the opportunity to help others. If you have questions on something, the staff is right there to answer your questions. 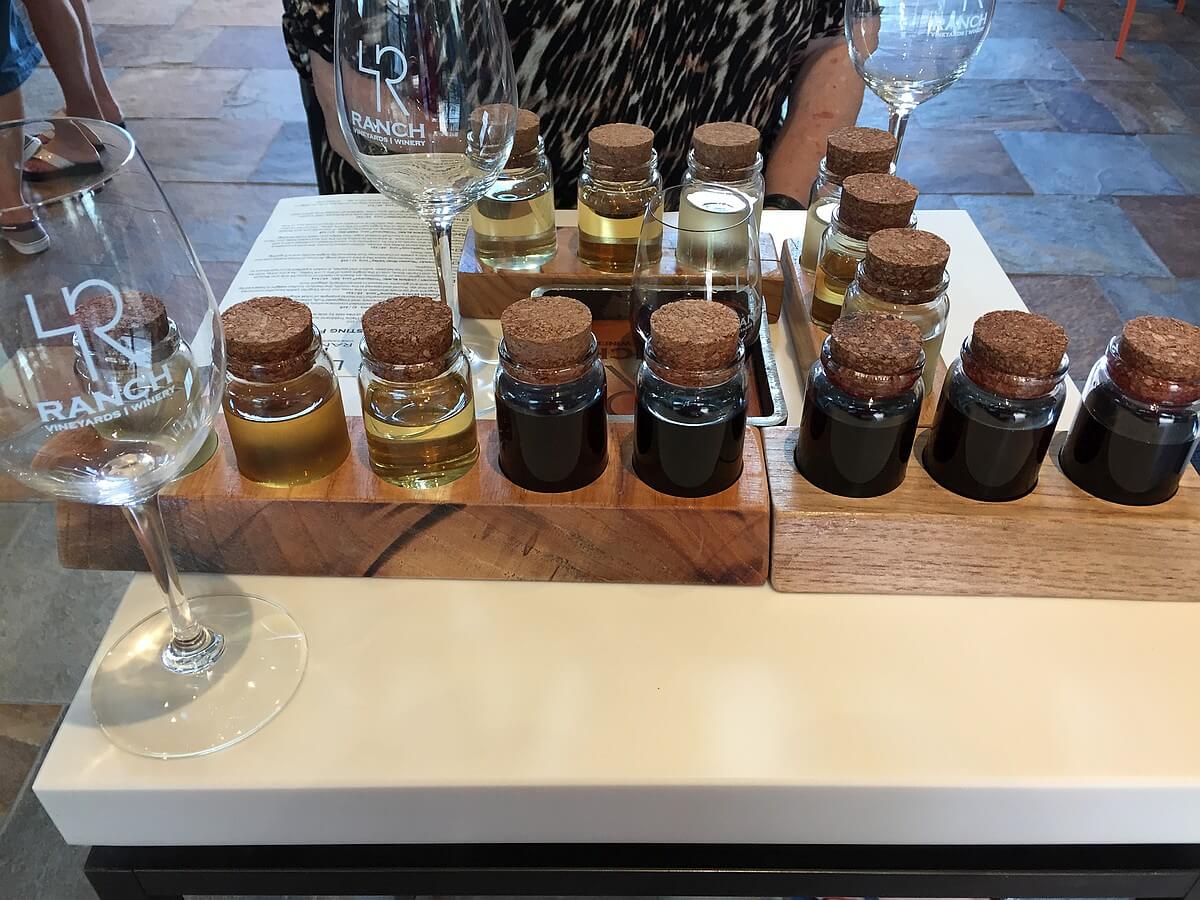 After you decide how many wines you want to taste, the next challenge is deciding out of the 18 wines, from my count at the time of my visit, from which to select. Winemaker Willem Johnson must have been busy! During the tasting, crackers are served to cleanse your palate. You can also buy food like cheese plates and pub mixes if you would like more substantial food while tasting, or while enjoying a glass later.

I cannot list all the wines that were available, but some of them were:

As you can see, 4R Ranch Vineyards and Winery makes wine from Texas, non-Texas, and especially estate fruit. After you find you enjoy the 4R Ranch wines, they do have a wine club you can join.

While we were tasting, Walt Roper arrived after working in the vineyard, and joined us during our tasting. He asked the staff for a bottle of the Lenoir/Grenache wine which is one of his favorites. He wanted us to try some, and even though I am not a big fan of dry Lenoir wines, the combination of the two made a big difference. I was so impressed that I bought a bottle to bring home.

We finished our tastings, and Walt offered to show us the production building which is called the Barnhaus. I remembered seeing what was going to be the production building when Dave and I first visited. At the time, it was a barn with dilapidated walls and the promise of rebuilding it for production. We hopped into our cars and went down the hill where the first turn was and followed Walt to the building. When we arrived, I could not believe I was looking at the same building. It definitely had been rebuilt and with corrugated sheet metal on the outside, you could already tell it had undergone a big change. 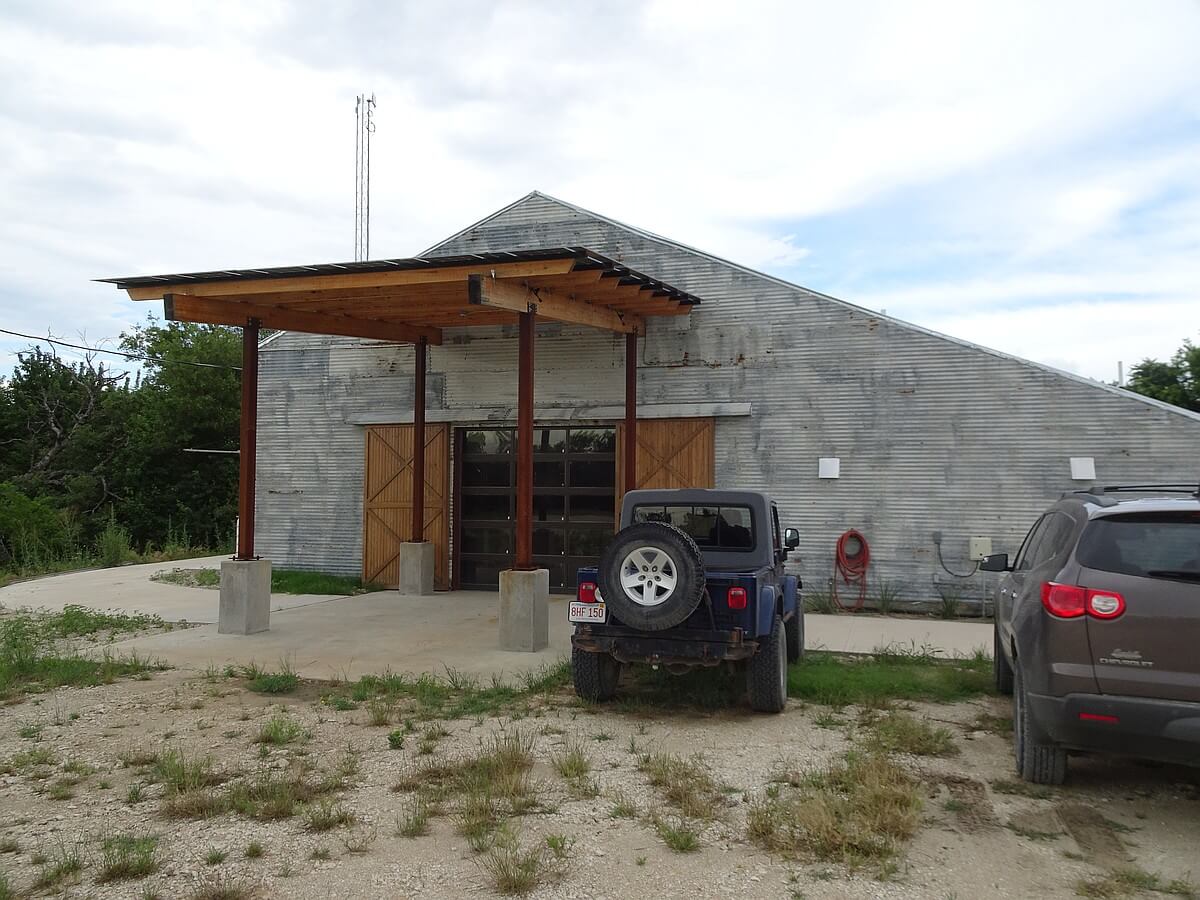 Inside the building, Walt first showed us an area which is going to be used for events including weddings. A bridal area is available for the bride and bridal party to prepare for the wedding. Rehearsal dinners can also be held in the event area.

Back in the production part of the building are the normal stainless steel tanks, barrel storage, and a nice lab. Solar panels are used to help with electricity for the building, along with geothermal heating and cooling, so you can see a lot of work went into the remodeling. 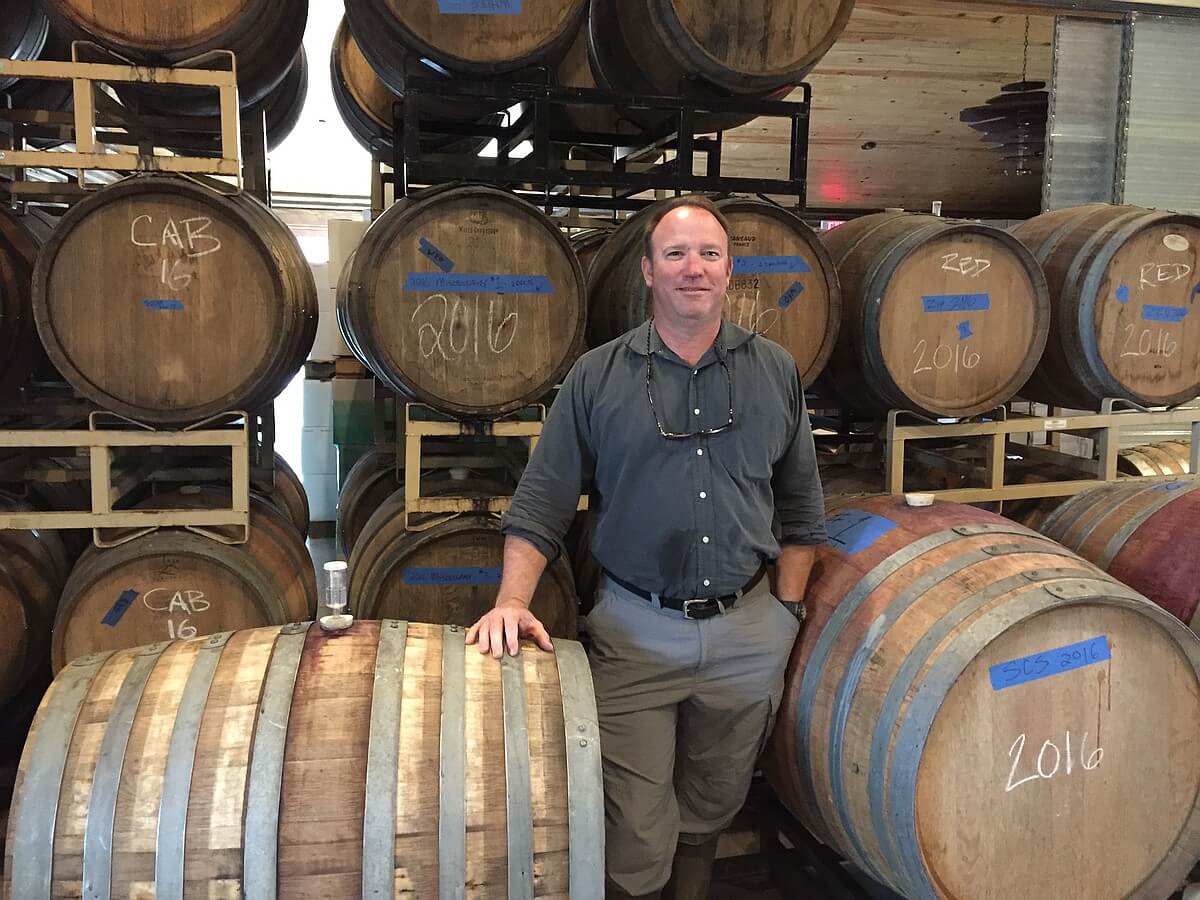 We thanked Walt for the time he spent with us, and followed him back to the tasting room to leave. I was a little unclear why we didn’t head down the hill we had driven up, but the winery has everything planned out with one way roads, and the exit road was near the tasting room.

Next time you’re in the Muenster area and do not mind a little dirt road, take the drive and visit 4R Ranch Vineyards and Winery to enjoy their many wines in the beautiful tasting room, and enjoy the gorgeous view from the deck.

Just had a rehearsal dinner there. Great ambiance, wine and hospitality!! Love the winery

Glad you had a great time!