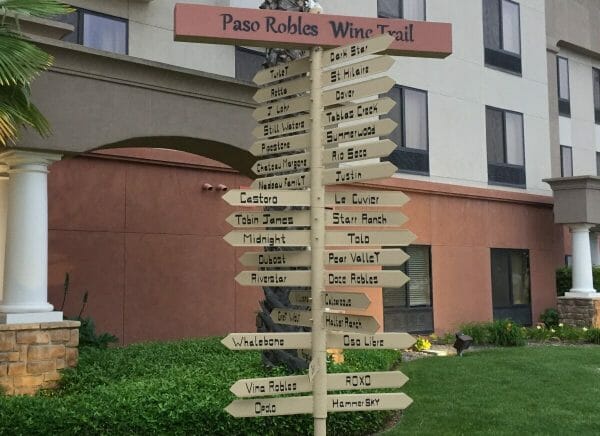 Have you tried Paso Robles wine? A couple months ago, I would have answered that question as yes, I have tried some. But that’s all I really knew about Paso Robles, except it is in California. That all changed recently when a number of Texas writers were invited to Paso Robles for a three day immersion into the Paso Robles AVA. Why invite Texas writers? It turns out that besides of course California, Texas is the number two purchaser of Paso wines.

Allow me to give you a brief overview of the Paso Robles AVA and area, and then I can get to the fun stuff of what we did during our visit to Paso. And finally, what exactly did I think of Paso Robles wine.

First, how do you even pronounce the name Paso Robles? For the first word, I wasn’t sure if it was pronounced Pass-O or Pahs-O. When our guide said sometimes people get confused with Paso being El Paso, Texas, that was the key to remembering how to say Paso. Then for the second word, is it ROH-buhlz or ROH-blays? Even after the trip, I cannot correctly tell you because everyone there pronounced it differently. So that’s why most people just end up saying Paso.

The Paso Robles AVA is centrally located between Los Angeles and San Francisco with a three hour drive from either city. The AVA was established in 1983 with 17 wineries. Today there are over 200 wineries and more than 40,000 vineyard acres. The AVA is so large that it was divided into 11 sub-AVAs/districts in 2014 based on climate, soil, and terrain differences. 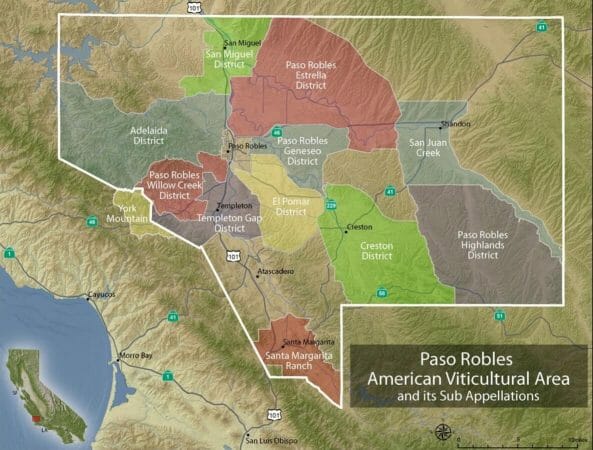 There are wide diurnal temperature swings in the region from the winds of the Pacific Ocean over the Santa Lucia Range in the west and the downslope winds from the Lap Panza Range in the east. The soils in the west are alkaline calcareous soils with patches of igneous toward the western foothills. In the east the soils are sedimentary, alluvial loamy clay soils with patches of granite in the middle and some older alkaline soils toward the southeast. The east has sandier soils compared to the west.

Our group of Texas writers arrived at the San Luis Obispo airport south of Paso Robles, where Chris Taranto, Communications Director, and Jennifer Porter, Executive Director, of the Paso Robles Wine Country Alliance were waiting to whisk us off to our hotel in Paso Robles. Chris would be our guide for our stay during the week.

While we headed to our hotel, Chris told us some information about Paso Robles. Besides the aforementioned information about the AVA, he told us how the AVA was originally extended to include the Santa Margarita Ranch sub-AVA. After a check-in at our hotel, we indeed headed to Santa Margarita Ranch first. We arrived at Ancient Peaks and inside the tasting room of the winery, we had the opportunity to taste a 2016 Rosé made from 100% Pinot Noir. We were all getting ready for a tasting after some long airline flights, but instead were directed out to a shuttle bus for Margarita Adventures. We were going zip-lining! 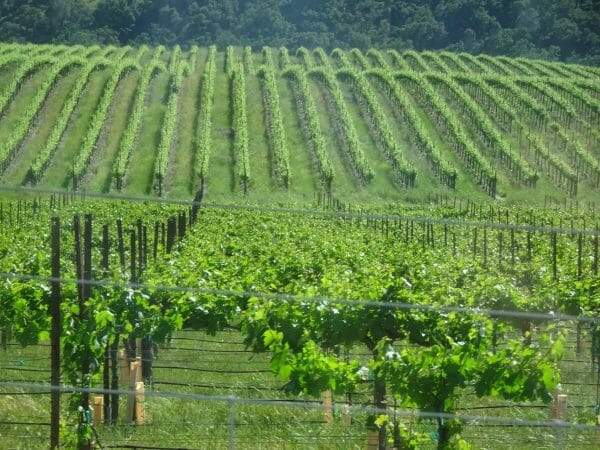 As we drove to the zip-lining course, Karl Wittstrom, co-owner of Ancient Peaks Winery and Margarita Vineyard, drove us through the estate vineyard for Ancient Peaks while explaining about the property. The ranch was 14,000 acres and Robert Mondovi first planted 900 acres of vines there under a lease agreement. There are five different soil types and 17 different varietals being grown at Margarita Vineyard. Besides using the grapes for their own wines, they also sell to other wineries in the area. 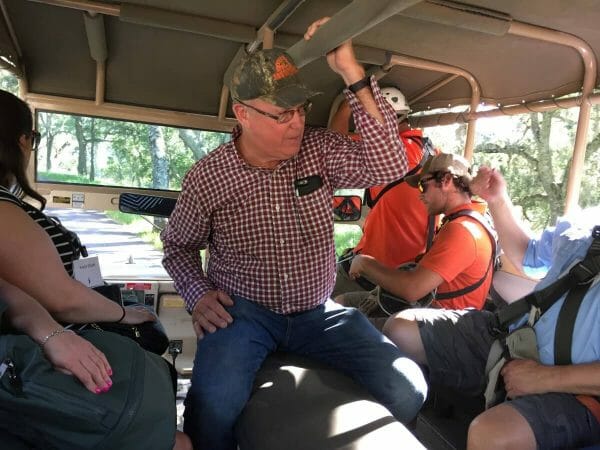 Karl Wittstrom on the bumpy way to zip lining

When we arrived at the 1/2 mile zip line tour, those in our group decided if we were going to tackle this course or not. A couple people who have never done zip-lining before decided to give it a go and a couple more decided not to, and just enjoy the fantastic view. Me, this was going to be my third time zip-lining, so I was all for it. Karl had explained that the winery wanted to give something to customers other than wine tasting, so the unique landscape of Margarita Vineyard was perfect for the zip-lining over the vineyards. There was some huffing and puffing during our tour, especially to get to the last zip line, but everybody who went had a great time. 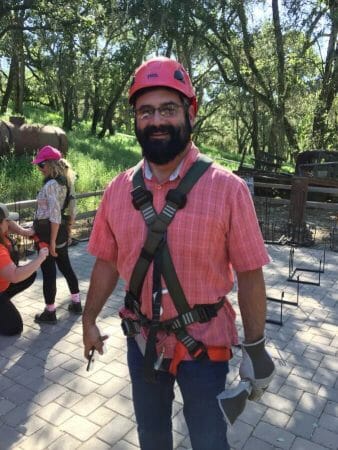 We ended up at the winery’s event center called Oyster Ridge because part of the vineyard contains oyster shells. Here we were going to have dinner and get the chance to meet with winery guests Don Brady, winemaker at Robert Hall Winery, Robert Henson, winemaker at Peachy Canyon Winery, and Ben Mayo at San Antonio Winery. All three wineries also obtained some fruit from Margarita Vineyard. This was also the first of many opportunities where we had the chance to meet people from other wineries and also taste their wines, capitalizing on the time spent in one location instead of having to drive to the different wineries. Also joining us was Mike Sinor, winemaker at Ancient Peaks. Most of the wines we were introduced to that night and during the trip are available in the Texas market.

Each winery got to speak and introduce the wines they had brought. Robert Henson from Peachy Canyon had brought a 2016 Chardonnay, 2014 Incredible Red (98% Zinfandel, 2% Petite Sirah), and a 2014 Westside Zinfandel (77% Zinfandel, 11% Petite Sirah, 7% Alicante Bouschet, 3% Tannat, 2% Syrah). Robert mentioned that Paso still has a small sense of community where they are all working together.

The first Texas connection was then made when we learned Don Brady from Robert Hall was originally from Texas. He had graduated from Texas Tech University in 1984 during which time he worked in the Pheasant Ridge vineyard. After college, Don worked at Llano Estacado Winery and in 1991, he was awarded the Texas Wine and Grape Growers Association’s “Louis F. Qualia” Award for outstanding contributions and leadership in the Texas wine industry. He moved to California in 2001 and became the winemaker at Robert Hall Winery. 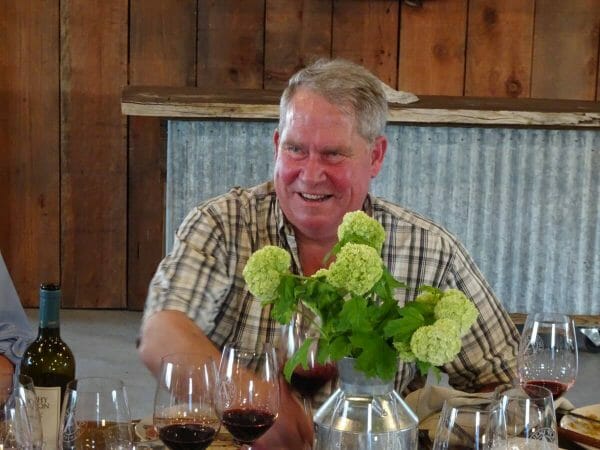 Needless to say, the wines were all excellent and the food fantastic from Jeffry’s Catering. It had been a great day of food, wine, and fun, with a perfect introduction to Paso Robles.