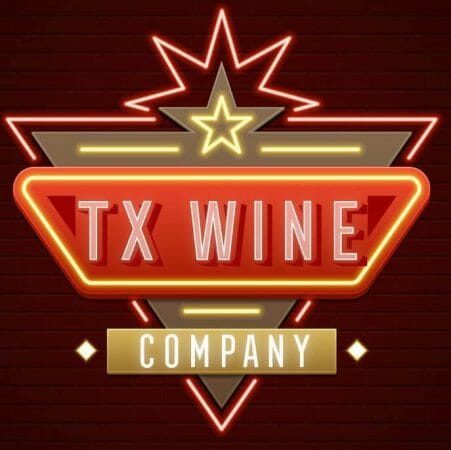 Andy Timmons grew up on a cotton farm in West Texas. He then became a cotton farmer himself. And he was content with that. Life was good. Farming took a bit of a turn and Andy began to look at other ways to supplement his farming and make it all work. In walks grapes.

Since the day Andy planted his first row of grapes in the early 2000s, he has made it his business to learn everything he can about the grape and wine industry. He is a man not afraid to ask questions and not afraid to step out and take a chance if it means helping the industry. He said, “When the 2002 Farm Bill was introduced, the peanut program was changed and looking down the road, you could see that cotton was falling out of favor in Washington. I began to think about what could be out there that the government wouldn’t have a huge hand in and that could keep my operation afloat.” 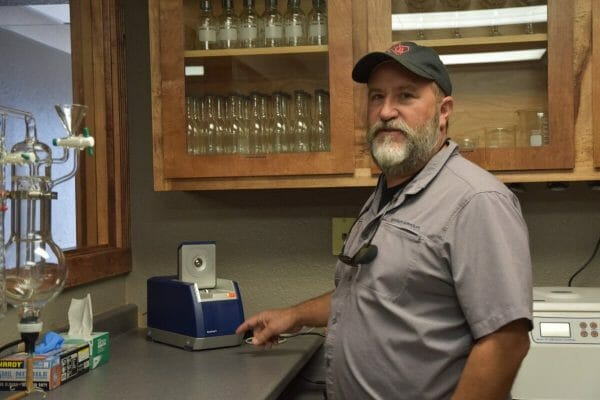 Andy began with five acres of grapes as, more or less a hobby. Terry County grape grower Larry Young was his mentor and helped teach him a few things about growing grapes. “I enjoyed the grapes and planted more. I began to see that it fit what I was trying to do on the farm,” stated Andy. He was able to build and grow his vineyard plans over time as he farmed. This year, for the first time, Andy has all his “row-crop” land leased out and is concentrating full time on the grape industry. “It was exciting to me to see how it was growing and to finally get to this point in my farm career where I could only think about the grapes, and leave the row-crop farming worry to someone else.”

Lost Draw Vineyards began in 2005 and Lost Draw Cellars came along in 2014 as the business grew. Andy now grows over 30 varieties of grapes on his land. He also manages vineyards for others, particularly those just starting out. Andy is always willing to share what he has learned with others and welcomes the chance to give back to the industry. He is currently serving as President of High Plains Winegrowers Association.

But Andy has not slowed down. He and his partners, Kamar Paka of New York and Gregg Marrs of Washington, have recently begun work on the Texas Wine Company located in Meadow, Texas in the heart of the Grape Capital of Texas, Terry County.

The Texas Wine Company will be open for business this fall when the harvest begins. And Andy is looking for a record harvest. “We are expecting a major harvest this year and we will be geared up and ready when harvest time comes. From bin to bottle. We do wine here,” stated Andy.

Texas Wine Company (TWC) is a full scale custom crushing facility and they are ready to handle a lot of grapes. “We can handle 1,000 tons, but this year we are planning to hold it to 500 tons since it is our first year. We plan to do a quality job for our producers and we want to be sure that we do not overbook ourselves this first year as we work all the kinks out,” stated Andy. 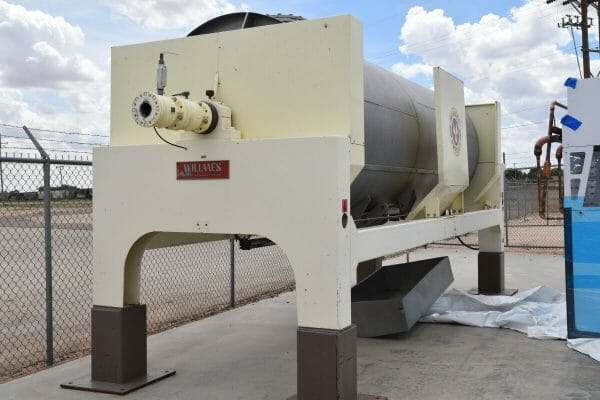 However, Andy’s vision is big. Not necessarily big in terms of financial success, although that part will not be turned down! He has plans to make TWC a training place of sorts for grape growers. “I think sometimes, in this area, new grape growers are a bit intimidated by their lack of knowledge on the subject. This is a whole new deal for so many producers in this area. I want the growers to feel comfortable sitting out here around the table and asking questions and talking and learning from each other, so they can go out and market their grapes with more confidence. I had guys who helped me, and I want to be able to help others as well. I have a goal of Terry County one day having 10,000 acres of grapes. I hope we can be a part of helping that to happen.”

Terry County’s grapes are currently primarily grown by cotton farmers branching out into the grape industry. These guys are smart. They have grown cotton successfully under some pretty tough conditions. They are a tenacious lot and ready to see success in grapes. But, the terminology and the seasonal work is a completely different animal to these guys, and this is where Andy hopes TWC can make a difference for the producer branching out into grape growing.

When the planning for TWC began over 18 months ago, the facility found in Meadow, which is just 11 miles north of Brownfield and about 30 miles south of Lubbock, seemed perfect for the job. It was an abandoned chemical and seed warehouse and yard. It had the acreage and the building space needed. Just one more thing was lacking. It needed its own water well. Chemically treated town water cannot be used in the processing of the grapes. As luck would have it, the elderly lady who had a home just behind the facility was ready to sell and the group eagerly bought her property, which included the water well needed by TWC. The house purchased will also be used by TWC to house their winemaker when he is in town, as well as others who may need to use it while working in the plant. 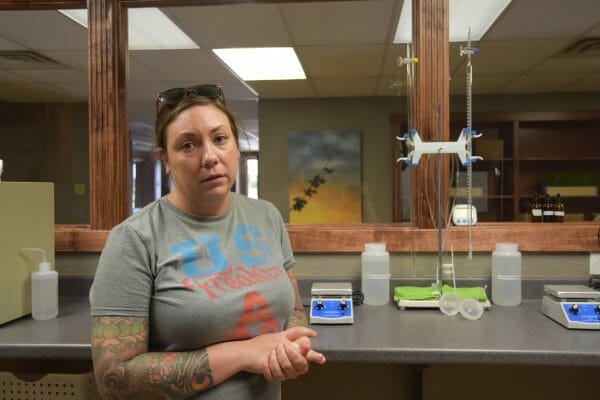 TWC has an in-house lab where blends can readily be tested and formulated. Chris Hull, who spent 18 years with Llano Estacado Winery, will be the winemaker at TWC, and he will be assisted by Lab Technician Cassie Mull who is at the facility daily. Cassie has a colorful story and will certainly add to the plant with her knowledge and also her willingness to do anything asked, and her readiness to learn more and more about the industry and what makes a great and marketable wine. 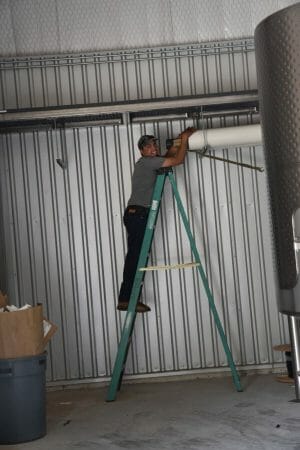 Also on hand to help with making TWC work like a charm are Frank Garza, who is well known for his knowledge of grapes from the vine to the bottle. Frank’s charm and quick wit, along with his knowledge make him a great addition to the facility. George and Peggy Seeley will also be a part of the TWC family. Peggy and George are grape growers, but Peggy has worked with Andy as a part of Lost Draw for many years and brings much knowledge with her. George is somewhat of a jack-of-all-trades, and Andy stated, “We haven’t found much that George can’t figure out how to make work. We are excited with the staff we have on hand here.” Oh, and the TWC dog. Chicka. Chicka was found as a stray, and has been taken in and has taken over. 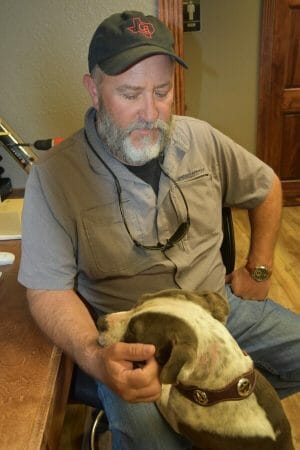 The facility will have three coolers on site, as well as two presses. And tanks. Bright stainless steel tanks line the room as there are three different sizes of tanks at TWC: 6,600 gallons, 3,300 gallons, and 1,650 gallons. The tanks are designed to perfectly do their job. The diameter of the larger tanks is the same as the height. This has proven to be the best dimension for fermenting red wine. 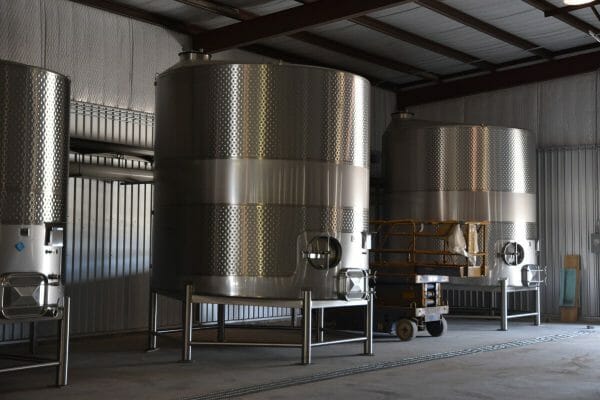 While the term “bulk wine” is often used in a facility such as TWC, Andy and his partners do not really like that term. “Bulk wine to me indicates mass production. We are treating every batch individually, and will work with the grower and the winery to create a product all will be proud to label.”

A look around the place will tell you, that it is more than about dollars and cents. It is about a love for the industry. And for that, there is no price tag.