If you like wine dinners, you need to visit Brennan’s of Houston. I enjoyed a great wine dinner there previously, and recently was invited to attend a wine dinner hosted by Fall Creek Vineyards. Fall Creek has been producing some excellent award-winning wines in recent years, so we were looking forward to the dinner.

Gloria and I arrived at Brennan’s where the valet quickly helps with your car so you do not have to worry about finding a parking spot. Wine dinners are apparently held in the event rooms upstairs and in the last room, we were greeted with a glass of Fall Creek Sauvignon Blanc Vintner’s Selection, Texas, 2016. During the reception, bites of compressed melon with balsamic fruit vinaigrette and Ngò ôm with fresh mozzarella were offered. The pairing was an excellent start to an evening of culinary arts and fine wine. 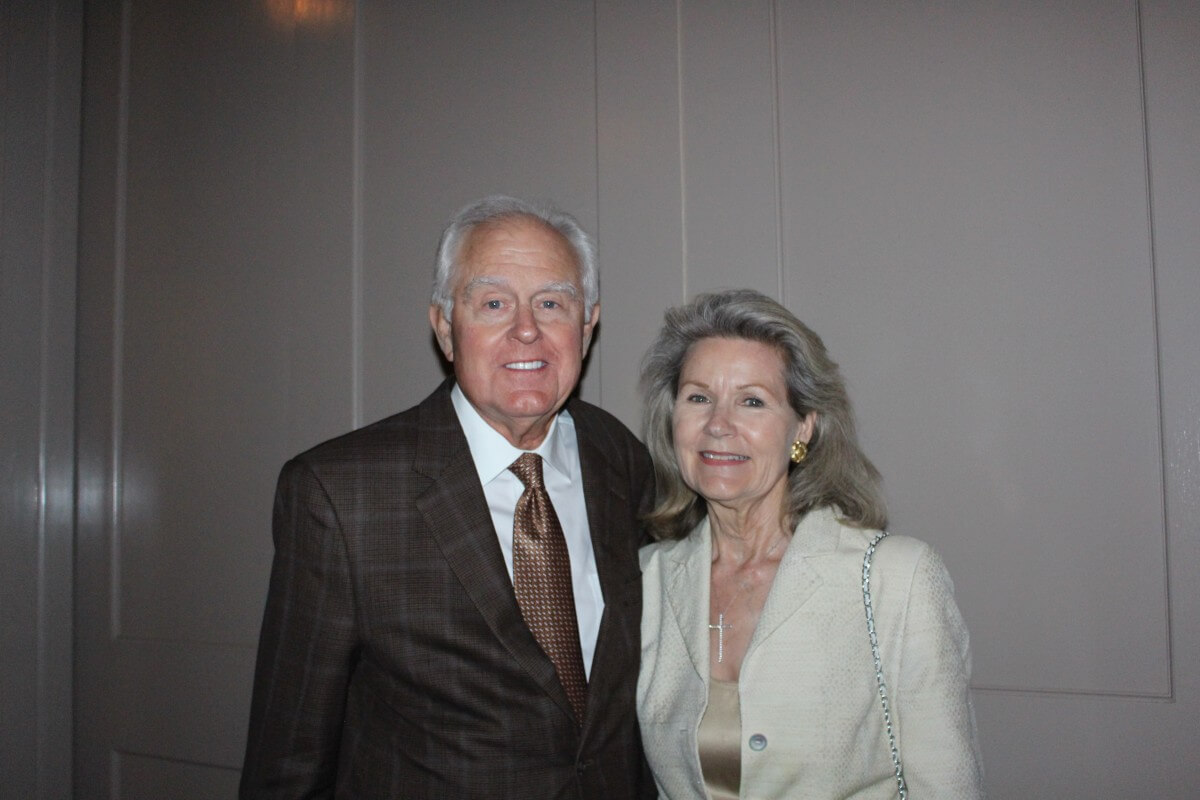 It was lovely seeing Fall Creek owners Ed and Susan Auler again and getting the chance to meet Alex Brennan-Martin, President of Brennan’s of Houston. The Aulers have known Brennan-Martin since 1982. The Aulers were greeting diners as they arrived, so we went in search of our table with our name cards. 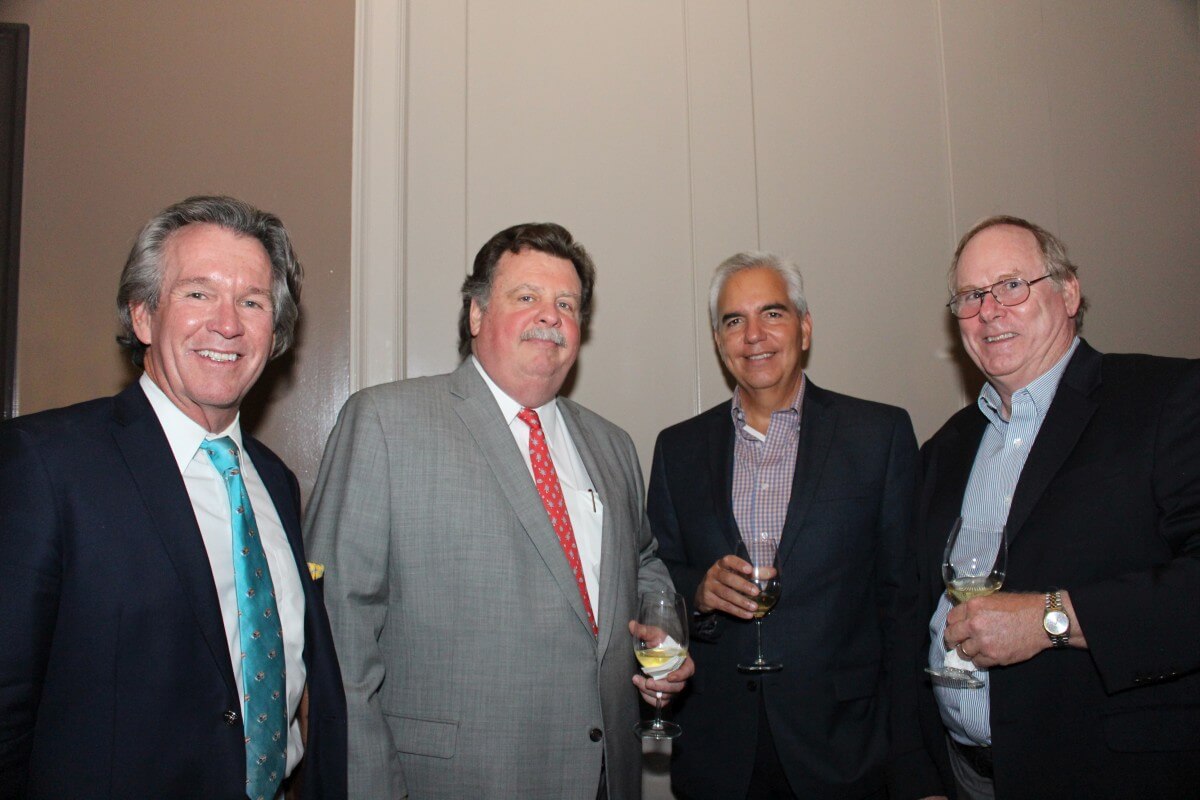 During the reception, we met other wine lovers, including Texas wine lovers. One couple we sat next to was Taylor and Leah, who had even gotten engaged at Fall Creek at Driftwood earlier this year. After 23 diners had arrived, it was time to start the festivities. 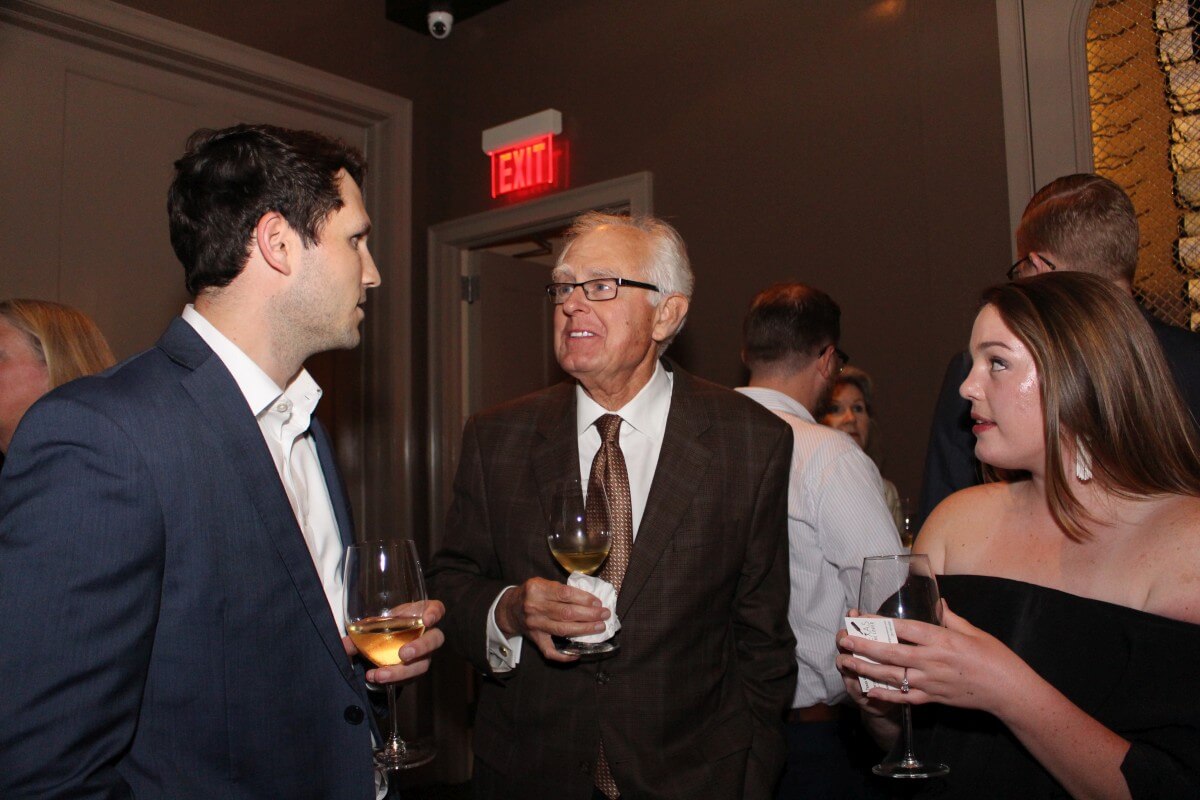 Ed Auler with Taylor and Leah

While the first course was being served, Ed Auler gave a brief history of Fall Creek Vineyards because he wanted to concentrate on their future instead. He said he is often asked how they got started in the wine business, and he answers it was three simple words, “low cattle prices.” That produced a chuckle, and he continued with how they visited France where they spent three days on French cattle ranches and three weeks in French châteaus. Returning to home, they decided they could do the same thing in Texas and started their vineyard in 1975. They built the facility in 1979.

Since Cuadra’s arrival at Fall Creek Vineyards, the winery opened a second location in Driftwood across the road from Salt Lick BBQ, where they also source some of their grapes from Salt Lick Vineyard. Other vineyards used from the Hill Country are Certenberg Vineyards and their own vineyard, along with Mesa Vineyards in west Texas.  Also a new addition in 2016 was assistant winemaker Phil Price, an experienced winemaker from Napa. 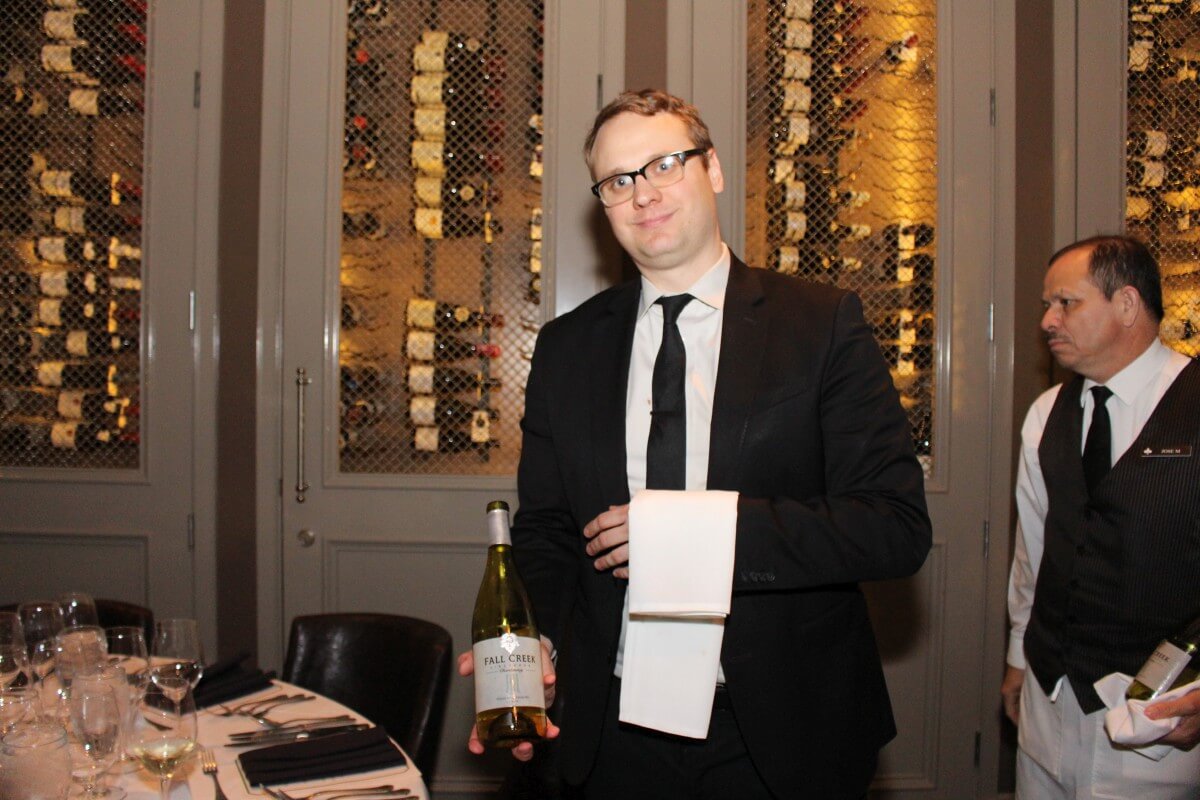 The first course was Oyster Rockefeller Soup with DR Delicacy Caviar, Toasted Brioche, and a Mezcal Crema. This was served with Fall Creek Vineyards Chardonnay, Vintner’s Selection, Texas Hill Country, 2015. Auler had explained the first two wines were going to be Chardonnays which people commonly say cannot be done in Texas. Both wines were made from grapes from the same vineyard. The Vintner’s Selection was totally fermented unoaked and Auler said, “This is what Chardonnay is supposed to taste like before anybody does anything to it.” 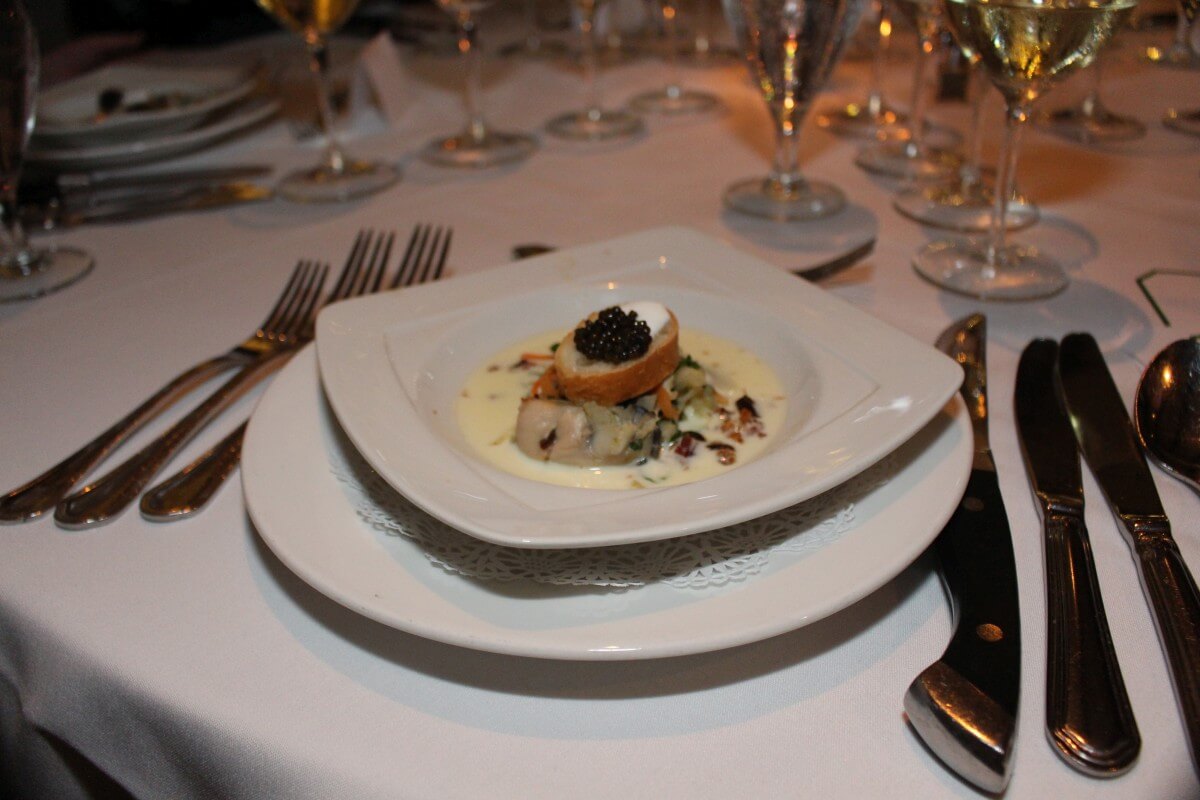 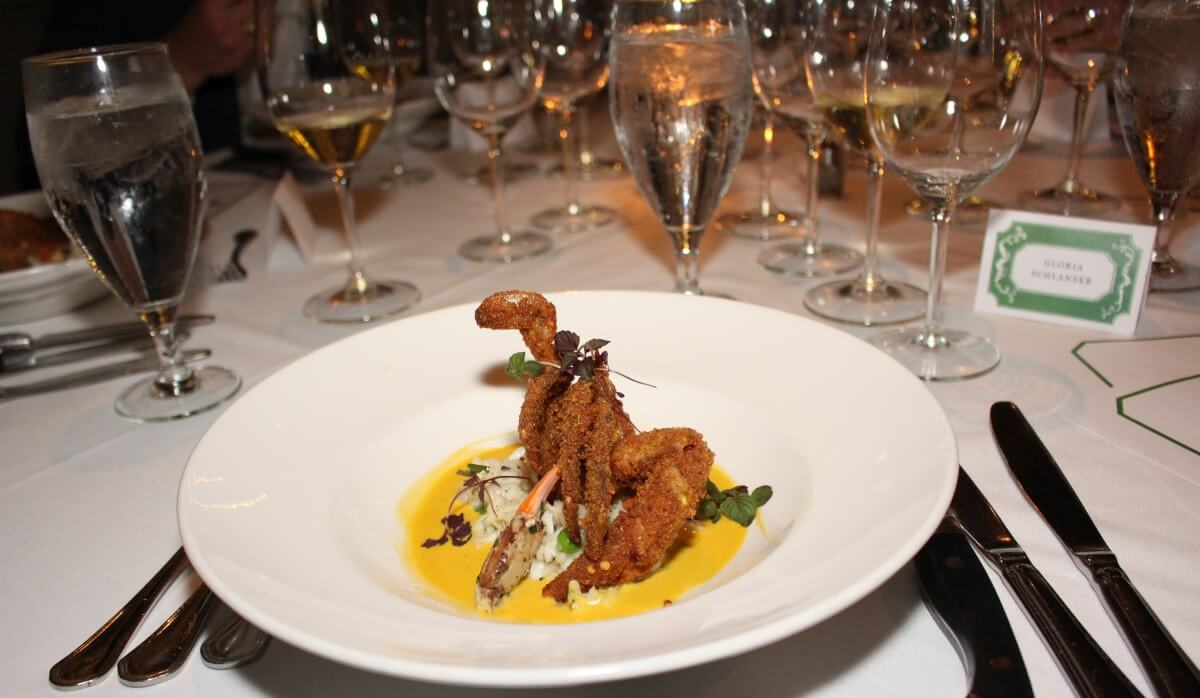 Before the third course, Auler explained the next two wines. The first wine was a GSM from Salt Lick Vineyard. The second wine described was a Tempranillo, also from Salt Lick Vineyard. He explained how the owner of Salt Lick BBQ, Scott Roberts, called him one day and told him he was going to plant a vineyard. He contacted Auler years later and asked him if he would like some Tempranillo grapes. The reply was sure, they would try them. They were very impressed with the Tempranillo wine made and have continued to make it.

Auler continued, “Part of our goal here is to out-Rioja the Rioja people.” He explained how he and Susan went to Spain last year, and they had Tempranillos from all over Spain. They were told the people there have had Tempranillos all over Spain and Tempranillos in all types of soil. They had determined the right soils to use and then they decided there were different altitudes for the same soils. So to summarize, they determined what the exact altitude should be for a Tempranillo vineyard and it was about 315 meters. Auler took his calculator to convert to feet and it came to 1,035 feet. He then explained that the bottom elevation of Salt Lick Vineyard is 1,030 feet and the top is 1,040 feet.

The third course arrived which was Braised Rabbit Ravioli, Mushroom Cream Sauce, and Grilled Summer Vegetables paired with the Fall Creek Vineyards “GSM”, Salt Lick Vineyard, Texas Hill Country, 2014. We noticed that the white wines had been served from the bottles, but all the red wines were being served from decanters which had been decanted for over an hour. 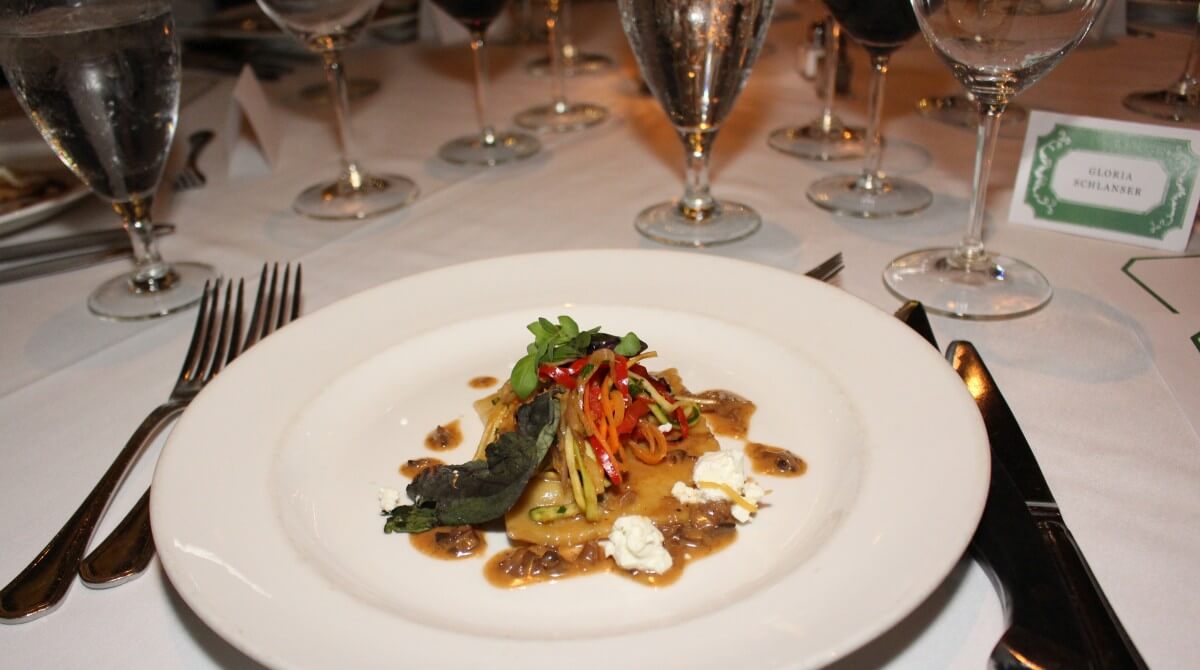 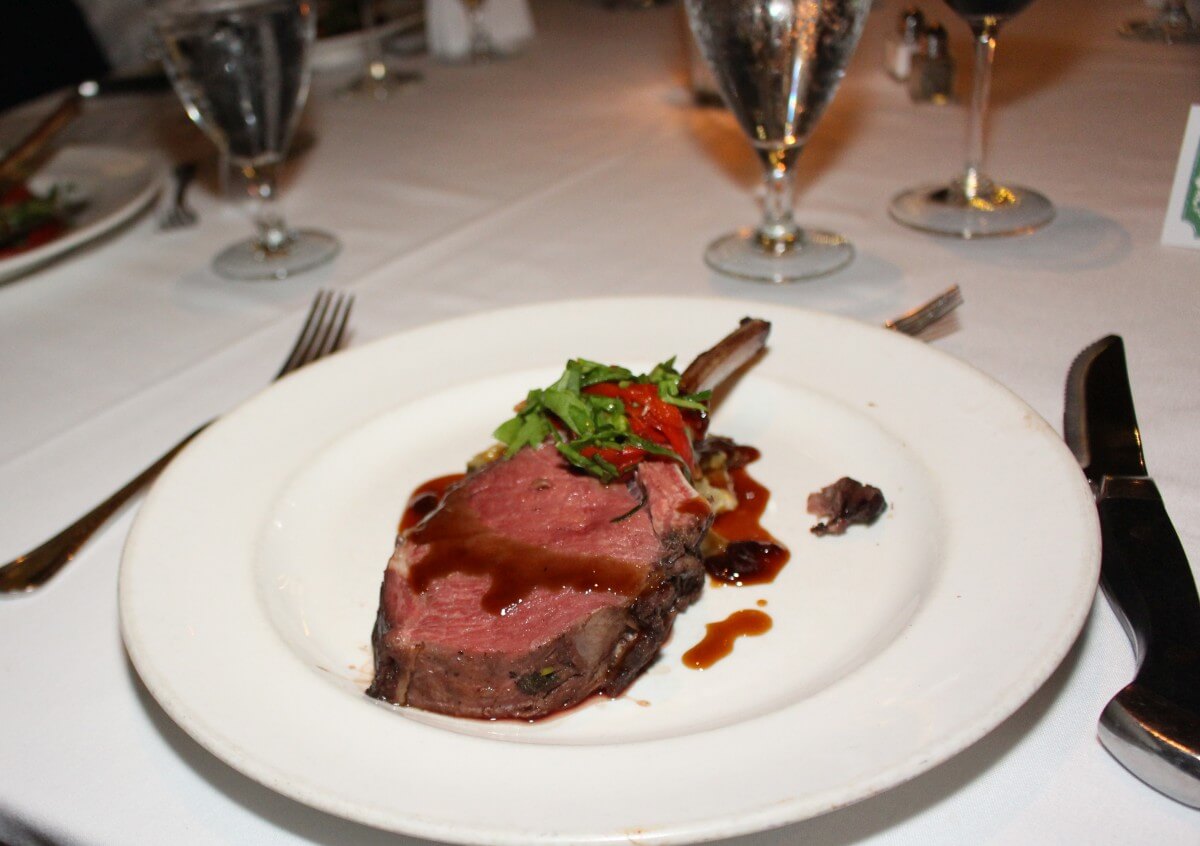 Before dessert, Auler explained about the Fall Creek Meritus. The wine is not made every year, but only in the years when the grapes were of the quality they wanted to make the wine.

Dessert was Arevalo’s Mexican Chocolate Mousse with a Dark Chocolate Crumble, Ancho Reyes Ganache, and Strawberry Preserves. One would expect a sweet wine for pairing, but the Fall Creek Meritus Cabernet/Merlot Blend, Texas Hill Country, 2013 did make a wonderful pairing. 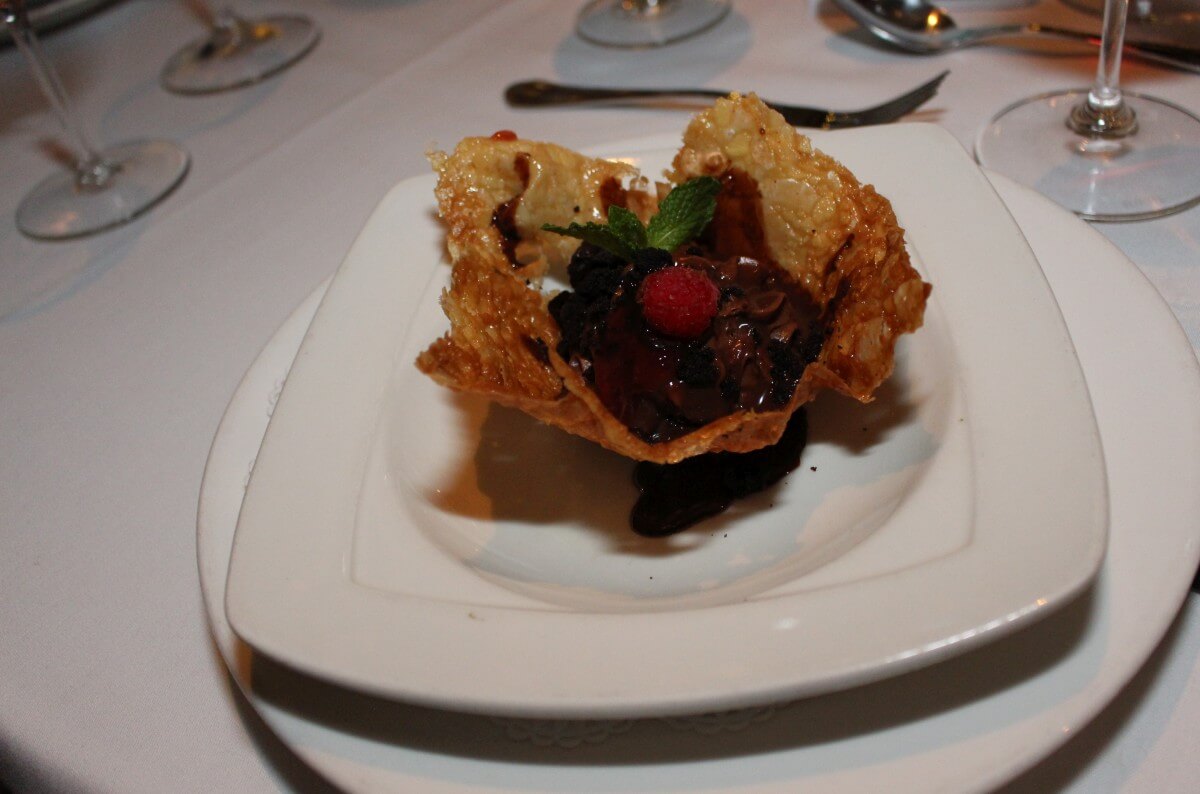 The evening was unfortunately over, but the wonderful food from Brennan’s of Houston and wines from Fall Creek Vineyards will stay in our minds for a long time.