It took two and a half years to decide what the next variety would be. Winegrower Andy Timmons of Lost Draw Vineyards told the audience at both the 2017 TWGGA (Texas Wine & Grape Growers Association) Conference and the 2017 Texas Wine Revolution festival that he is a big believer, as many of his friends in the grape growing business, that the Mourvèdre grape is very versatile. It buds late to avoid the possible late spring freezes and is late to harvest. If there was one grape Timmons would grow, it would be Mourvèdre.

After hearing Timmons discussions and with the popularity of Mourvèdre, not to mention our love of the wine, that quickly became the next Battle contestant. Can we say, “Let’s rumble?” 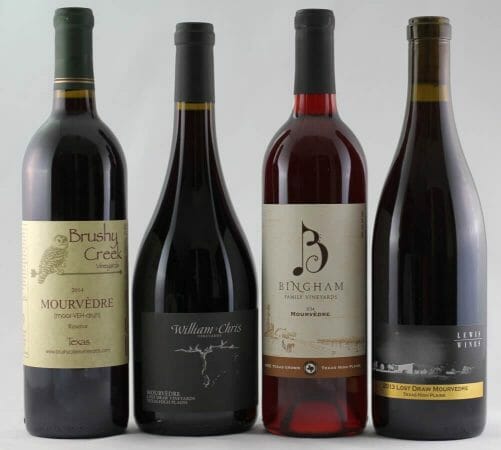 We were quickly searching every Texas winery who made a Mourvèdre. We were looking for the red wine, not a rosé or a blend such as a GSM (Grenache, Syrah, Mourvèdre). One winery was sold out, another winery didn’t have enough even for the owner’s daughter’s wedding, and another winery said yes, but didn’t end up participating. In the end, we obtained 17 Mourvèdres from 11 wineries; not bad for an up and coming wine with big potential for Texas. 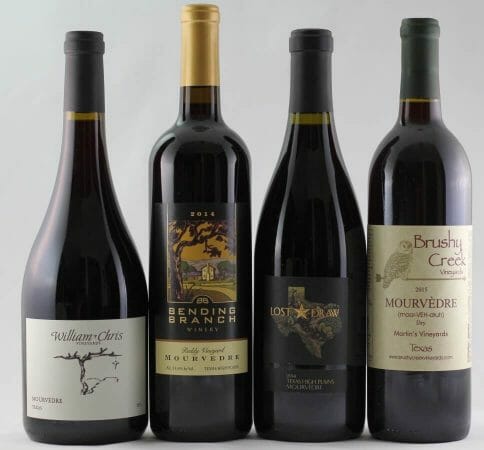 Thankfully like the previous two Battles, owners Ryan Levy and Ian Eastveld of Nice Winery, were very generous in letting us use their facilities. Besides the excellent wines Ryan and Ian make around the world, they make an award-winning Texas Blanc du Bois and are always exploring the opportunities of other Texas wines. 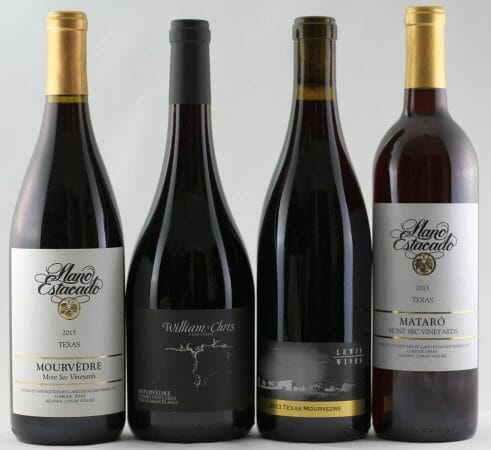 With the wines lined up, it was now time to create a list of judges. We believe the best judges are a diverse mix of people from different backgrounds instead of just one set such as sommeliers. We also wanted to mix up the judges and not have the exact same ones from the previous Battle, so palates would be different and a fair judging of the wines would be given. We ended up with a total of 11 judges with five new judges for the Battle. The resulting set of judges was an eclectic set including winemakers, winery owners, winegrowers, sommeliers, wine bloggers, experienced judges, and wine lovers. 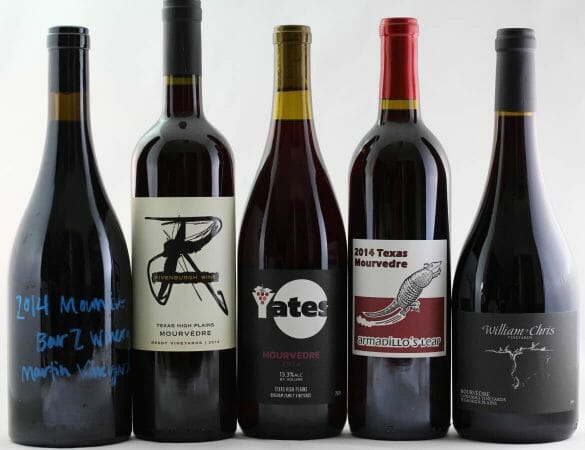 The wines included in the blind tasting in alphabetical order were:

We decided to use the same scoring system we used in the previous two Battles which gave us a result from 70-100 per wine. All wines also had a backup bottle in case one wine was determined to have a fault.

We followed the same process as last time where we would only give the top 10 wine results instead of the entire list from top to bottom. We believe this is fair since the last place wine might imply it was a bad wine, when in fact it may be very good, but just got a lower score.

I handled the bagging and numbering of the wines when we arrived at the Nice Winery. All foil capsules were removed if present. All wine bottles were placed in brown bags and the neck taped at the top of the bottles.

We did not have as many wines as the previous Battle, but we decided to do the same three wines per flight for the judging since it worked well before and the judging would take less time. Since I have had more experience as a wine judge, we served roast beef, celery, and bread to cleanse palates during the tasting. 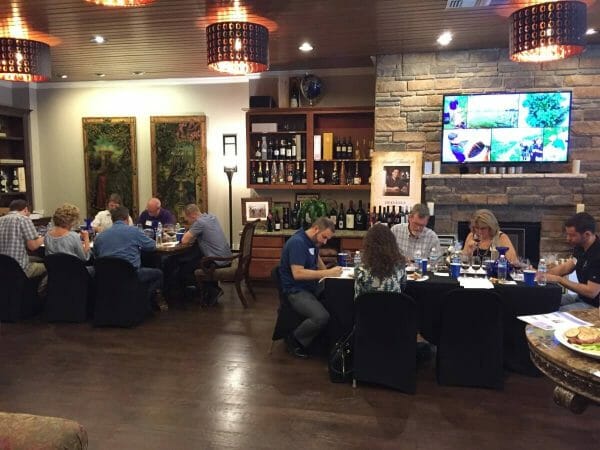 All the judges arrived at noon as planned and we sat down to begin the blind tasting. After instructions on judging were given, the first round of three wines was poured by experienced pourers Ryan Levy, Paul Bonarrigo, and Phil Price. Eight minutes were given per round for the judging of the three wines. 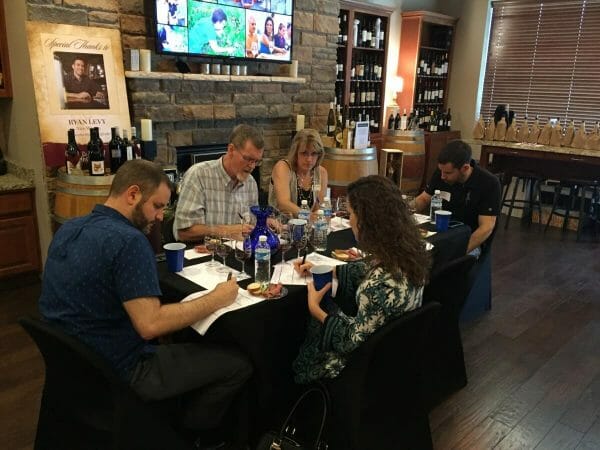 After tasting and judging all the wines, it was time for the unveiling of the wines and the judges were able to see for the first time the wines they had judged as their favorites. Special Texas Wine Lover gold, silver, and bronze medals were awarded for the top three wines. 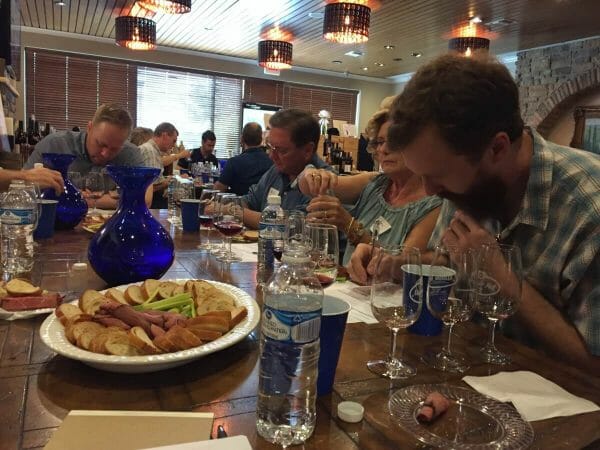 With the scores tabulated and ranked, the results were presented to the group. There was actually a tie for the 9th spot. These are the top 10 wines which were ranked by the group of 11 judges: 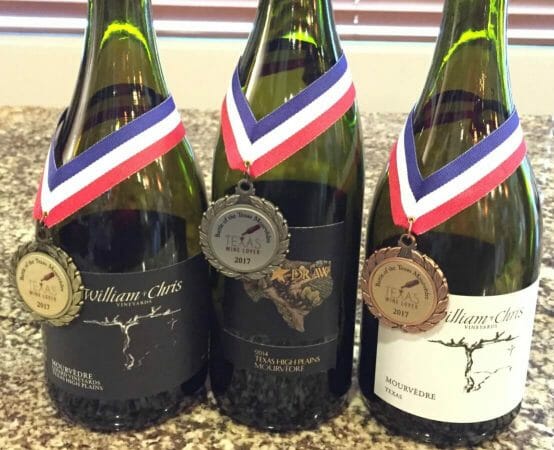 One interesting note one judge made was all the wines were mostly from grapes grown in the Texas High Plains. The judges had been instructed to judge each wine individually and also to give fair results from the start to the finish. Some of the top ten wines were at the beginning of the tasting and others were at the end, so the judges did a fantastic job in treating each wine fairly.

Like the last Battle, I will be compiling and sending all the tasting notes later to each winery who participated, so they can learn what the judges said.

Overall, the Battle was a very fun experience with excellent wines and knowledgeable judges. Thank you to all the wineries who participated and the judges who traveled, some as long as three and four hours, just to help judge in our latest Battle. And as always, a huge thank you to Ryan and Ian from Nice Winery for helping Texas Wine Lover.

What variety should we do next? 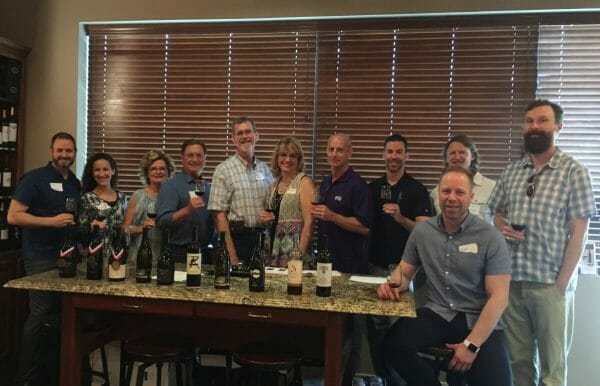