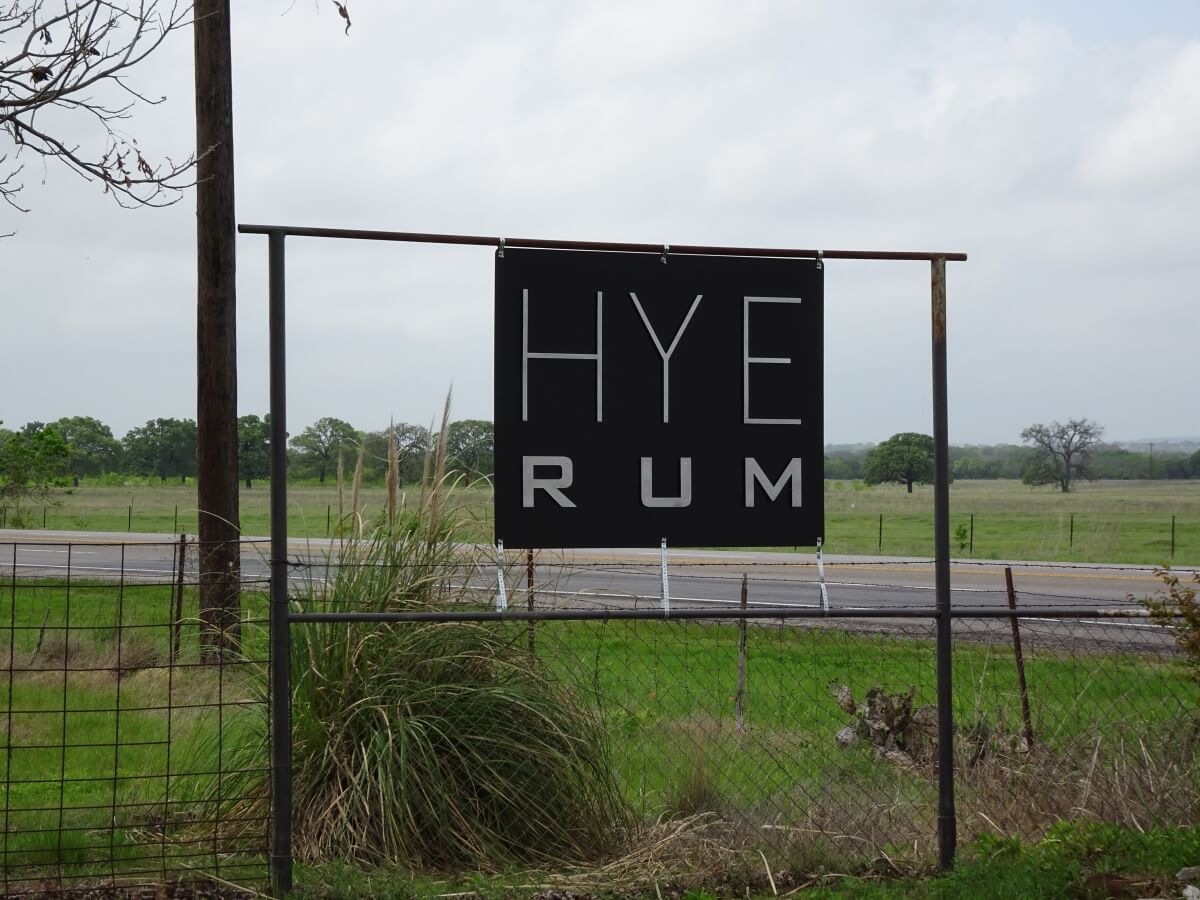 Texas Wine Lover wrote about Hye Rum in our preview from last year. The new distillery is a collaboration of Benjamin Calais of Calais Winery, distiller James Davidson, and entrepreneur Stephanie Houston. They started holding soft openings in April 2017, and of course Texas Wine Lover was there the first weekend available. We reserved our appointment time and paid for it when times were first available. 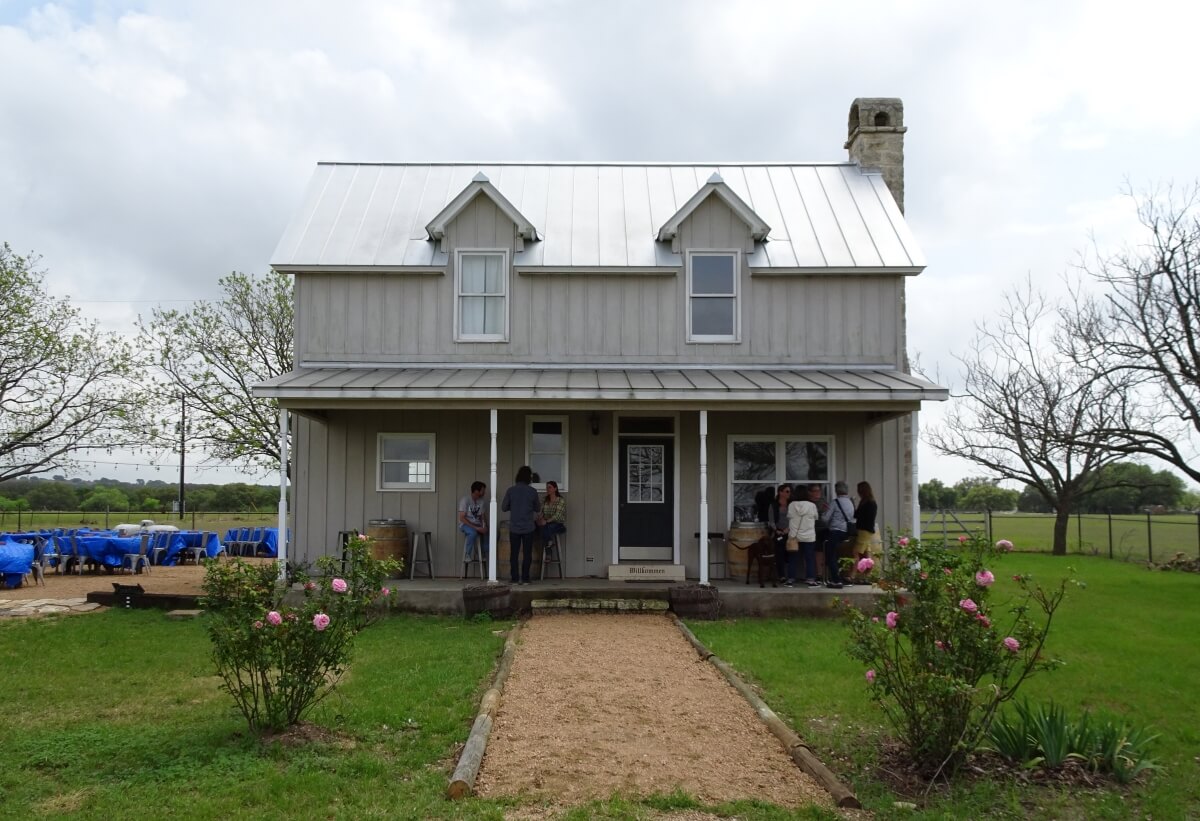 When we arrived at Hye Rum, we learned that the one hour appointment would start with a tour by distiller James Davidson. That was great because we had not had the chance to meet James yet. We learned at the start of the tour when we entered his lab, that at age 23, he really hadn’t started drinking. He started working at a liquor store to become familiar with what was out there, and concentrated first with whiskeys. He discovered he was very much into tastes, aromatics, and flavors.

Years later in 2011 at a supper club, he met Ben Calais, and together they learned Ben was interested in making rum at the same time he was building Calais Winery in Hye. So, James started drinking rum and learning everything possible there was about it. He went on a trip to Belize with his wife, and since Belize primarily only had rum, that gave him more of a chance to learn about rum. 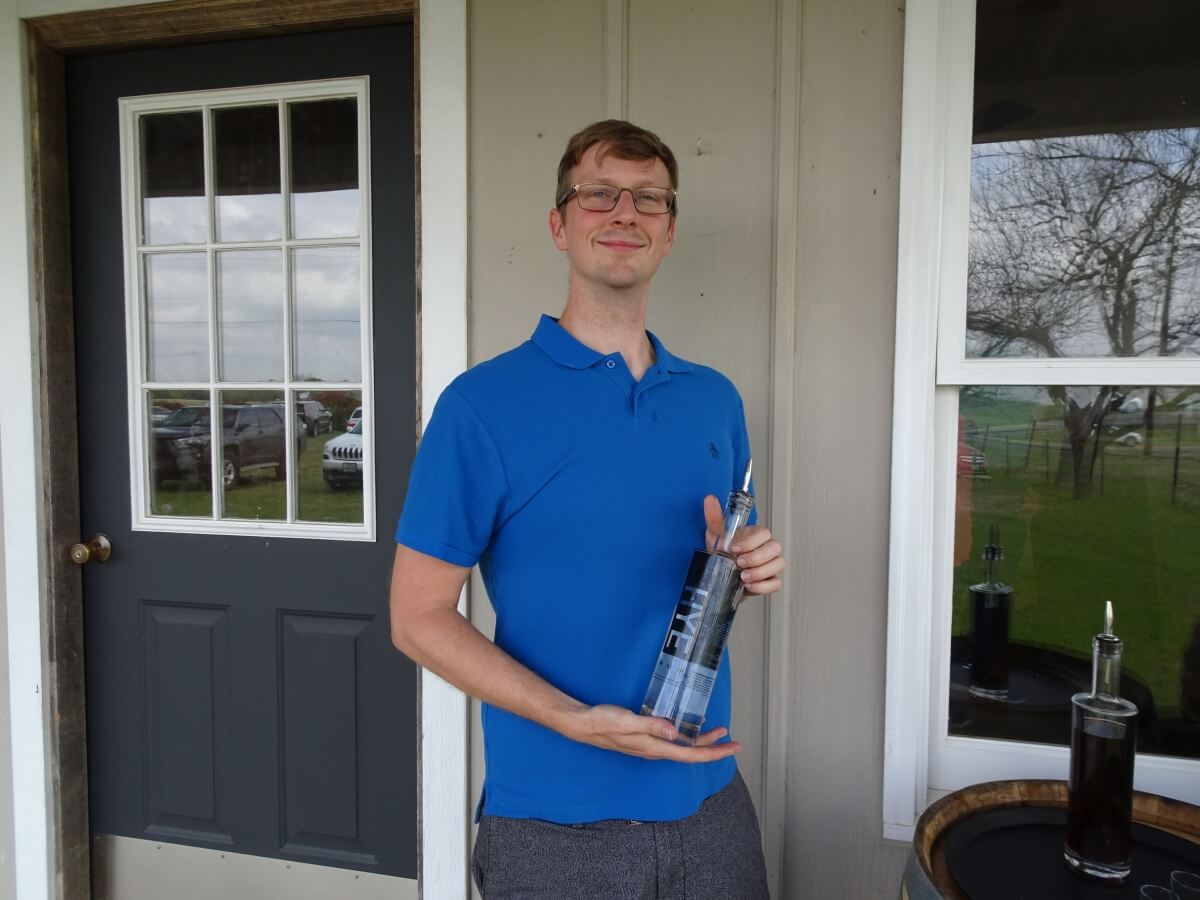 James said they bought their still from a distiller in Oregon, which was the first still the distiller in Oregon had used. Ben and James went to the distillery and had a one on one with the distiller who had been making spirits for 15 years. It turns out distillers are as open to what they are doing to others in the industry, so James learned everything he could possibly learn from the distiller. Even though the still has been around for 20 years, James said it just feels nice instead of being a new one.

Hye Rum does a fermentation up to 6-8% alcohol, and then it runs through the still and is heated up. The alcohol boils at 172 degrees (water is 212 degrees), so the alcohol comes off first which is more volatile and that is called the heads. The liquid which is more stable comes off later. A first run of five to seven hours is done, and Hye Rum does theirs at seven hours. A longer cooking time with the seven hours gets more aromatics too, which James prefers.

After they “strip” it (the first run), it gets to be about 30% alcohol, because they want it to be in the 35-40% range of alcohol. They then collect as much as they can, which usually is about 100 gallons. They then add more distiller’s beer or mash to bring it down further and to reinforce the flavor. A lot of people do not do that because they want to keep the alcohol at 35-40%, because they think they can get more out of it. James thinks it hurts the flavor. When he brings it off the still, he doesn’t filter it at all, and that keeps the fatty acids in the spirit. He has to be careful not to keep the heads in there, and not too far into the tails, so later there is more of a viscosity to it.

The barrel program Hye Rum uses is all under air conditioning, so they are not doing warehouse barreling like others are doing. The reason for that is they are doing more of a resting program than an aging program. All barrels are French oak and mostly come from Calais Winery. 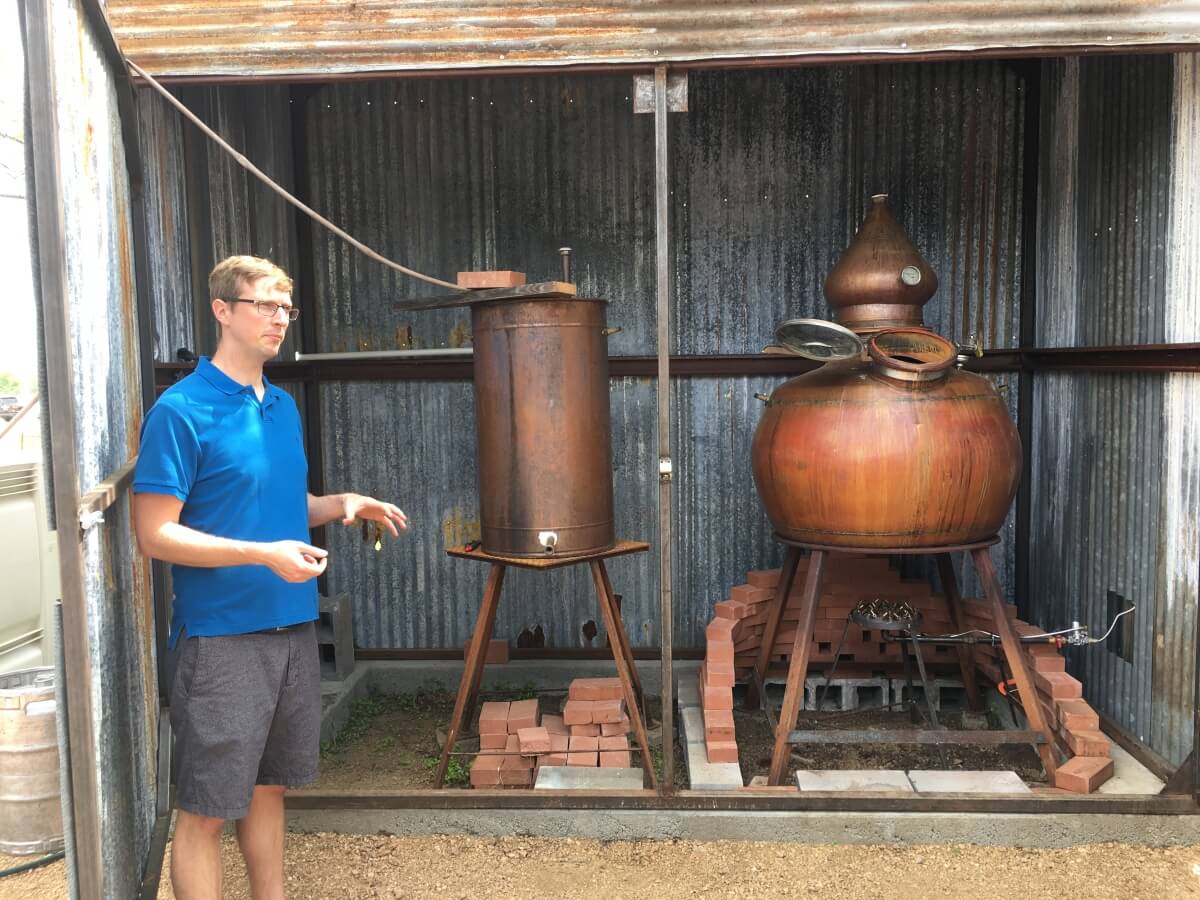 We then got to visit the still which is stored in a tin building behind the barrel/lab building. It is stored separately because it is direct fire, instead of a steam or oil jacketed still. The tin used to construct the shed is actually built from a lean-to that was on the property for 20 years.

James calls the still Pegasus, because distilling has almost a magical feel about it. The boiler and condenser are to the left of the still and it takes three hours to heat up, which in the end only takes up time and propane. Ideally, it should be a faster time.

Out of one distilling run, they strip three bottles and they end up bottling 71 bottles. They use what is left over (the tails) for blending in their next batches. James wants to keep the taste between his runs the same, so people do not say, “This one tastes a little different than the previous one I bought.”

James was a little concerned with cost and the time it took to make a bottle of rum, but when Ben and James decided on what they would be doing at Hye Rum, Ben told him he wanted James to make the absolute best spirit he could, and they’ll figure out how much it costs later. James said, “Our goal is to be craftsmen, not manufacturers.”

They are not selling rum bottles yet because of limited quantity, but hope to sell bottles by May. Prices are expected for the white rum to be in the $40 range, black rum in the $45 range, and the barrel rum to be in the $60 range. There will be multiple special releases during the year, offering special rums to their customers.

It was time to move to the last part of our tour which was tasting a cocktail! While sitting on the porch of Hye Rum, we got to first taste their white rum and dark rum neat. The dark rum is made from panela, which is unrefined whole cane sugar that brings the blackness to the black rum. Gloria thought the panela brought a balance to the dark rum. 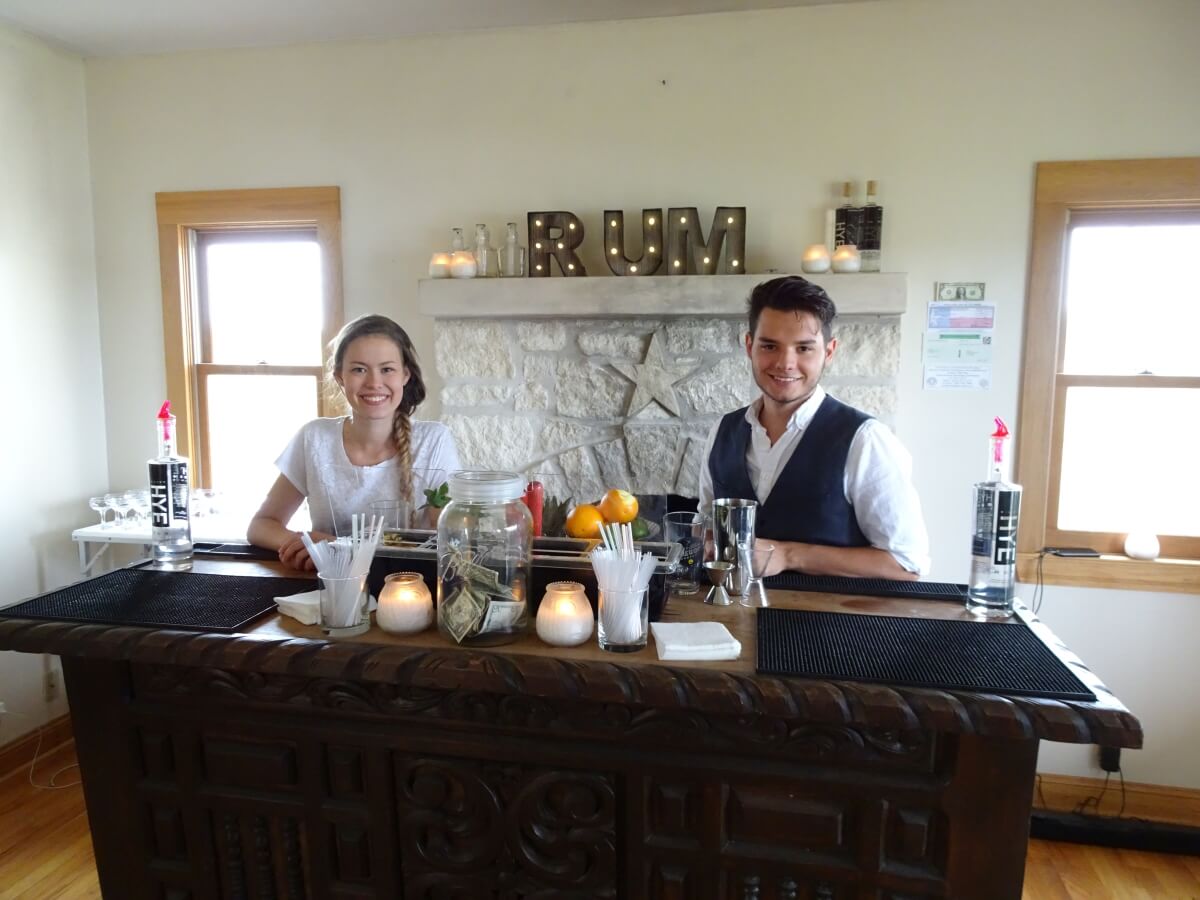 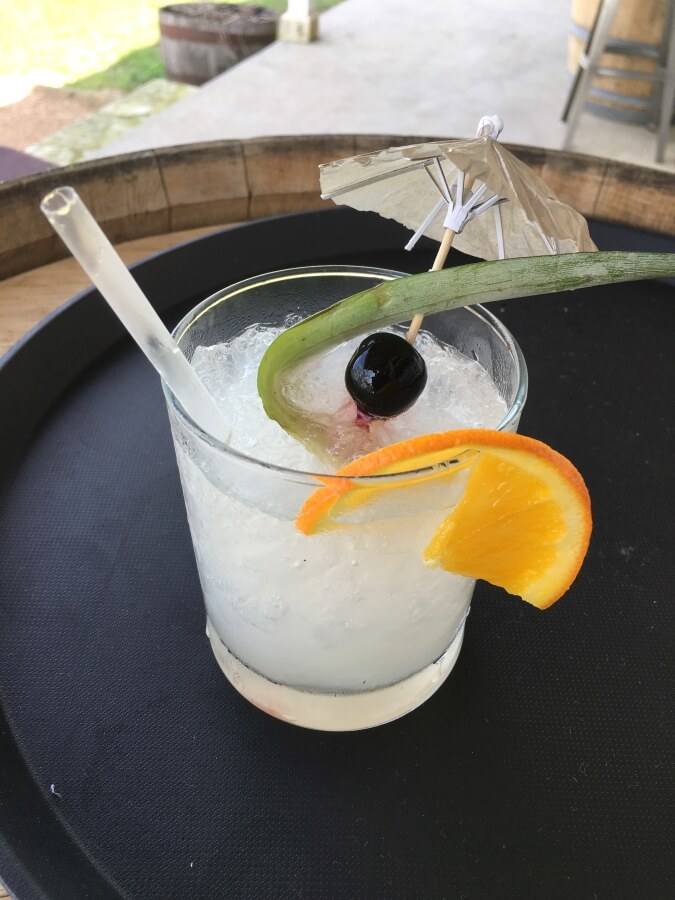 This was a great selection and they were reasonably priced for a cocktail. But remember it’s “Beer (wine) before liquor, never sicker. Liquor before beer (wine), never fear.” Or is it the other way around? Or does it matter?

Either way, the next time you are on Wine Road 290, make it a point at some time to stop by Hye Rum!

Track bottle sales and availability around the world on spiritradar.com