For some time now Laurie Ware and I have been talking about a wine trail trip to the Texas High Plains, the source of at least 75% of the wine grapes grown in Texas. Laurie took the lead in planning and managing this Texas High Plains excursion, helping to develop skills for what she envisions as a Texas Wine Trail Travel Agent business. Here is part three of the story of the wine trail trip that Laurie Ware planned for me, entitled “Carl’s Epic High Plains Vines to Wine Extravaganza.” Be sure to read the other days: One and Two.

Another bright, sunny and breezy morning greeted us in Brownfield on the Texas High Plains. Following breakfast at the Best Western Caprock Inn, Laurie and Shelly Ware, and I packed what we needed for the day and began the 20-mile drive westward along US-380 to Tokio, TX, for a visit to Diamante Doble Vineyard on CR-121. As we pulled into the driveway of the Wilmeth home, the family dog, Picasso, greeted us with friendly nuzzles and tail-wagging. Gay Wilmeth was visiting with her husband, Jet, who was preparing his pickup for our tour of the vineyards. We all loaded into the truck and began what turned out to be a most enjoyable and informative vineyard visit. Jet and Gay farm grapes in their Diamante Doble Vineyard, as well as row crops common to the Texas High Plains. This is a relatively large vineyard operation, and supplies a lot of fruit to a lot of wineries across the state, especially in central Texas and the Hill Country. Our primary connection to the Wilmeths is related to the fairly large range of grape varieties supplied to Lost Oak Winery in Burleson. 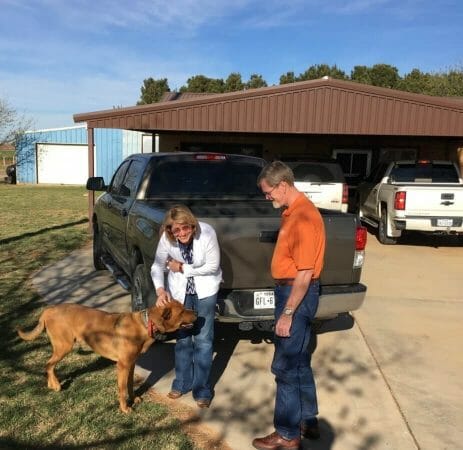 Jet Wilmeth began our tour along the road on the north side of the main vineyard. It was a most impressive site with meticulously pruned vines and rows that stretched one-half mile long. Jet pointed out the different varieties planted, including: Alicante Bouschet, Cabernet Sauvignon, Gewürztraminer, Merlot, Montepulciano, Mourvèdre, Muscat Canelli, Riesling, Viognier, and Zinfandel. He also began telling us about his frost protection practices, which are different from any others we had seen. This method of frost protection involves heating small metal pyramids, about 3 feet tall and 2 feet square at the base. A grouping of these pyramids are placed in a domino 5 pattern at 30-60 foot intervals in the vineyard, and heated with small propane burners placed underneath. As the metal is heated, warm air radiates outward, rising through the vines to displace cold air. This method appears to be very effective, but requires a significant amount of labor, and an extensive tubing/piping system in the vineyard to deliver propane to the numerous burner stations. Workers must set out the pyramids when frigid temperatures are predicted, and the small burners underneath have to be individually ignited when temperatures drop, usually very early in the morning. The task of rising from one’s warm bed and going out to work in the dark, chilly hours before dawn certainly does not make my list of favorite things to do. God bless the farmers and their crews that can and will do this job. 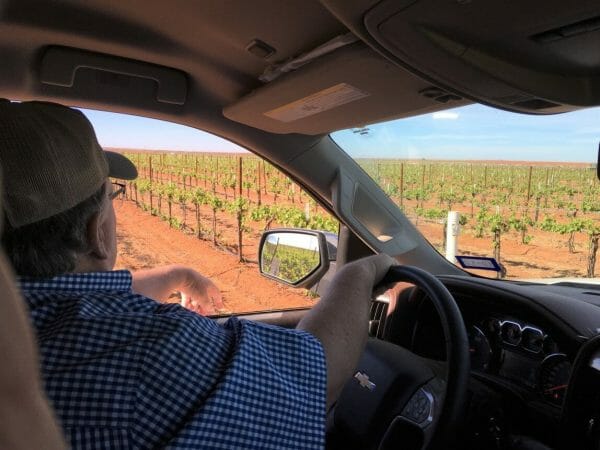 There were a number of key features to Jet Wilmeth’s frost protection system. There were the metal pyramids themselves – 700 of them I believe Jet said. Then there were the numerous propane tanks required to supply the necessary fuel. Along the south end of the main vineyard there was a long row of 500 gallon, shiny white propane tanks, spaced one every six rows of vines. Extending from these tanks were heavy polymer lines carrying the propane all the way to the upper, north end of the vineyard rows. Every 30 feet was a T-adapter and a valve to connect to the small individual burners via a smaller polymer hose. Just thinking about the cost and effort required to set up this system sort of boggled the mind. But, as Jet pointed out, the cost was just a fraction of the value of the grapes, so it was not a matter of whether you can afford to build such a system, but rather that you can’t afford NOT to build a frost protection system. That sentiment is shared by most of the growers we visited and know around the state of Texas. 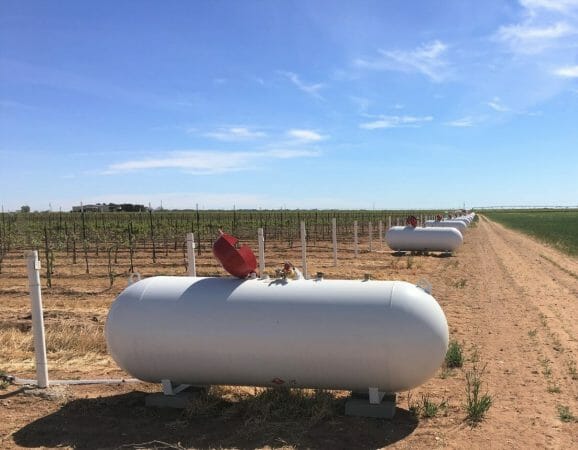 As we drove through the vineyards, we noticed a few spots where the hay cover crop between vine rows was burned. Jet told us about problems in getting all the polymer parts of the propane system to connect and stay connected. The two types of hoses and the T-adaptors were made of different polymers. The contraction and expansion coefficients of these polymers were different, making it difficult to keep all the connections tight and sealed. Whenever one of the connections loosened and allowed propane gas to escape, there was danger of fire in the vineyard. One such incident had caused a large fireball that essentially barbecued a dozen vines, much to Jet’s chagrin. He discovered this problem as he spotted the large flame early one morning when driving the vineyards to check on his system. Like Jet, we were saddened by the incident, and the loss of precious vines and the Texas-grown fruit they now would not yield.

Ty and Mary Wilmeth drove up and joined us on our tour as we moved on to the Hart family vineyard that Jet manages. There was lots of fun bantering between the brothers, making our visit even more entertaining. So many stories and so much history! We eventually headed back to the house and barn, but not before the brothers entered into a brief road race on the vacant highway.

At the barn, we got a good look at the frost protection pyramids stacked outside. We also saw several neat pieces of vineyard equipment. One was a set of spinning “rakes” attached to the front of a tractor that was used to collect pruned vine wood into the center of the rows between the vines. There, a flail mower could readily mulch the vine cuttings and leave then in the vineyards for natural compost. There was also a newer model of the Wylie sprayer based on the prototype we had seen at Soleado Vineyards the previous day. Another device that Jet had fabricated was a “backboard” on a grape harvest trailer that prevented mechanically harvested grapes from missing the plastic harvest bin. That, of course, meant more Texas grapes for more Texas wine.

We returned to the house and visited a bit with Gay and Jet. We were impressed with their heavy wooden dining table that was fabricated in Mexico. There were also a number of quality paintings on the walls of the large open dining, kitchen, and den area. However, the most unique decoration was Jet’s Yamaha motorcycle sitting just inside the entrance, apparently positioned for a quick getaway, when necessary. As I had done at other stops, I gifted Jet and Gay with some wines that were representative of grapes growing on their farm.

It was now after noon, so we said our goodbyes and headed off to Lubbock for lunch. We had been royally entertained and exposed to a great deal of grape growing technology and information. It had been a wonderful visit at Diamante Doble Vineyard. I certainly look forward to a return engagement with the Wilmeth family.

On the almost one-hour trip into Lubbock, we took Loop 289 to the far east side of the city to reach La Diosa Cellars located just off Texas Avenue, across the street from McPherson Cellars. La Diosa Cellars, a tapas and wine bar as well as a restaurant, is the domain of Sylvia McPherson, Kim’s wife. The place is decorated with many eclectic and brightly colored pieces of art, many from Mexico. The eating area included traditional tables and chairs, as well as comfortable sofas and stuffed chairs positioned around large coffee tables. We chose the latter and placed our orders for lunch. The food was very tasty, if a bit too spicy hot for me, and we enjoyed a nice wine (noted below). 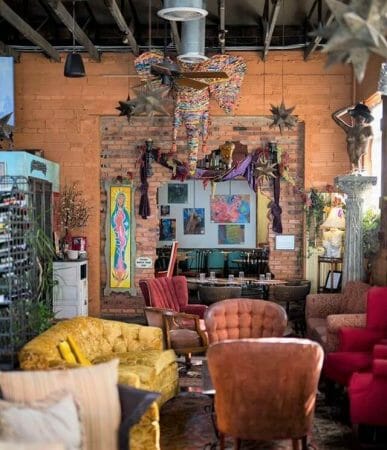 Once lunch was finished, we walked across the street to McPherson Cellars located at 1615 TX Ave, one of the old red brick streets in downtown Lubbock. The building is most impressive. It had been the 1930’s era Coca-Cola bottling plant that was completely renovated by Sylvia and Kim McPherson to become not only a winery and tasting room, but a spacious events center. We introduced ourselves at the wine tasting bar and began a fun visit and tasting with three lovely young ladies: Abby, Kendall, and Haley. We worked our way through the normal tasting selections, plus a couple of special wines that were offered since we were members of the Texas Wine Industry and had the employee/wine club connection with 4.0 Cellars. Since I was more involved with visiting and sharing stories with the ladies, Laurie was good enough to take the tasting sheet and keep track of the wines we tasted. This is from the list Laurie provided me. 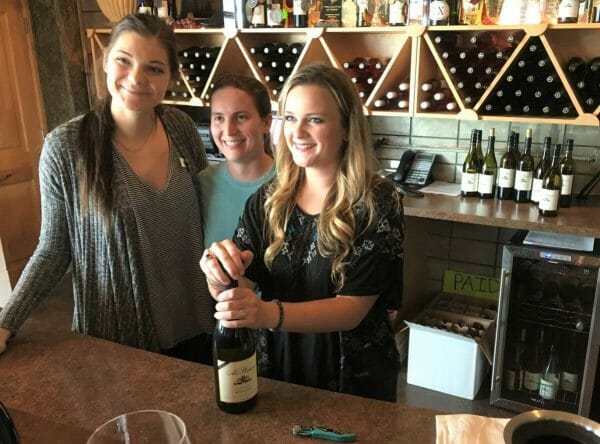 After the tasting with Abby, Kendall, and Haley, we purchased two bottles and retired to the lovely patio at the back of the winery building. The bottles we shared were:

We settled on the back patio, enjoying the pleasant temperature, the shade, and the gurgling water feature. Soon other folks came out to the patio and we found ourselves engaged in a most pleasant visit with two couples from nearby Texas towns: Laura and Marty Drake from Idalou, and Jennifer and Heath Verett, and their young daughter, from Ralls. They were all McPherson Wine Club members and frequent visitors to McPherson Cellars. It was fun visiting with them and sharing our collective enthusiasm for Texas wines. Since all of us had connections to smaller Texas towns, it was also fun to compare experiences in that regard. Heath was currently serving as mayor of Ralls, so he certainly had some interesting perspectives on the subject.

McPherson Cellars staff members began setting up for a special event that evening, so about 5:00 p.m. we departed. However, since our dinner reservation was not until at least 7:00, we decided to mosey over to another local spot, Triple J’s Chop House and Brewpub located at 1807 Buddy Holly Avenue. Just as we were seated, we spotted our new-found friends, Jennifer and Heath Verett, and their daughter, from Ralls, sitting in a nearby booth. We joined them and ordered a cold beer to help clear the palate from the previous wine tasting experience. After more fun discussion, we said our goodbyes to the Veretts and began our drive to the southwest side of Lubbock for dinner.

Laurie had made reservations for us at The Funky Door Bistro located at 6015-82nd St. The restaurant has developed a good reputation for quality food, live entertainment, and a very nice wine list. Once seated, we began to study the menu and I specifically focused on the wine list. In an effort to match our dinner selections, and Laurie’s preference for rich, bold red wines, I selected two from the list that would hopefully meet these criteria.

We enjoyed our dinner and made a point not to finish the two wines since we still had to make our way back to the hotel in Brownfield. We can certainly recommend The Funky Door Bistro for an upscale dining experience. It is, for sure, on the pricier side.