For some time now, Laurie Ware and I have been talking about a wine trail trip to the Texas High Plains, the source of at least 75% of the wine grapes grown in Texas. Because of where we live, Laurie and her husband, Shelly, near Burleson, and me in Fredericksburg, our wine excursions have tended to focus on the Texas Hill Country, the Way Out Wineries (WOW) of central Texas, and the Red River Valley area north of Fort Worth and Dallas. Two recent excursions to Burleson and the Red River Valley area, in August 2016 and February 2017, were great fun. The plans and arrangements for both of these trips were primarily made by me. However, for this Texas High Plains excursion, Laurie wanted to take the lead to help develop skills for what she envisions as a Texas Wine Trail Travel Agent business. So, here is part one of the story of the wine trail trip that Laurie Ware planned for me, entitled “Carl’s Epic High Plains Vines to Wine Extravaganza.”

The plan was for me to drive to meet Laurie and Shelly at her parents’ home just outside of Zephyr, Texas, east of Brownwood. It was an easy two hour drive from Fredericksburg and I arrived about 10:40 a.m. After greeting Laurie and Shelly, I was introduced to her parents, Rondel and Henryetta Stevens, who had prepared a wonderful omelet bar for nourishment prior to starting the trip. 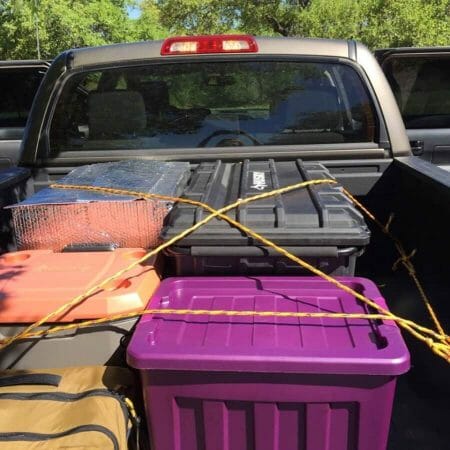 We finished the delicious brunch, and moved all the stuff from my vehicle to Shelly’s Tundra pickup which would be our transportation for this adventure. There were the usual suitcases and clothing bags, but a large portion of what we packed and loaded was wine, in various insulated containers and ice chests, that would accompany us on the trip. How can one go on a wine trail adventure without a LOT of wine? 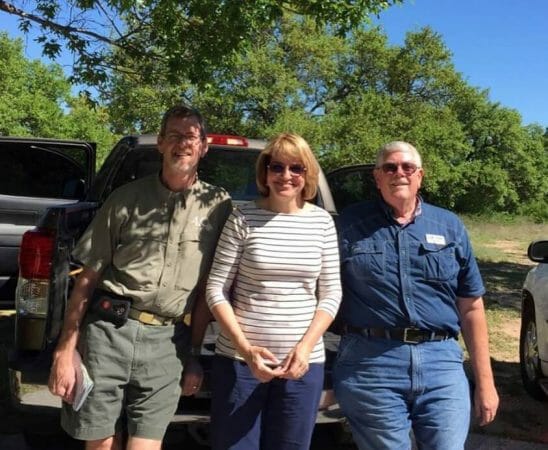 After parking my vehicle out of the way, we loaded into Shelly’s truck and hit the road to the High Plains. Our first stop was actually very close, at the new, about-to-open Star of Texas Winery. Laurie had met the proprietors, Moira and Brian McCue, at a conference and had been impressed with both their passion for the wine business, and their choice of location, just a few miles from her parents’ home. We parked in front of the impressive pole-barn style building that houses the tasting room and a large lounge area. There is also a large covered porch that will serve as a wonderful outdoor tasting area. Both Moira and Brian were hard at work finishing last minute tasks before their scheduled soft opening over the weekend. We took a quick tour and visited only briefly before setting out on the road again, promising to stop by Monday on our return and taste the wines they were releasing.

Back on the road, our route was relatively straightforward as we drove on US-84 through Brownwood, Santa Anna, and Coleman into Abilene. IH-20/US-84 took us from Abilene through Sweetwater and Roscoe, where we took US-84 through Snyder to Post. Post has an interesting history should one be curious. The town was actually platted and developed in 1895 on land that Illinois farm implement developer C. W. Post purchased after moving to Texas. Post founded his famous prepared foods company about the same time, and leveraged bountiful grain crops, especially those from the Texas High Plains, into a breakfast cereal empire. From Post, we turned directly west onto US-380 through Tahoka to Brownfield, the county seat of Terry County, now designated the Grape Capital of Texas. I have often told folks during tastings at 4.0 Cellars near Fredericksburg, that US-290, which runs from Fredericksburg to Johnson City, is the Wine Road of Texas. By comparison, US-380 that passes through Brownfield and Terry County is really the Grape Road of Texas. A large number of Texas vineyards are located on or just off US-380. From Brownfield, we headed north on US-82/62 to Meadow (towards Lubbock) in order to meet friends, Gail and Bill Day, at their home in Buena Suerte Vineyards on CR-240 outside Meadow.

After dropping off the paved road, the pathway to Buena Suerte Vineyards was a bumpy one as winter rains had taken quite a toll on the dirt roads leading to the Day’s house. We arrived about 4:15 p.m. and were warmly greeted by first Gail, and then Bill, who helped us unload all that we would need for an afternoon of wine tasting, an evening meal, and an overnight stay. They have a small, beautiful home at the vineyard where they can stay for weeks, even months at a time when not at their primary residence in Houston. We toured their lovely home, stashed our stuff in appropriate places, and then followed Bill outside for a good look at the vineyards. If I remember correctly, there are about 50 acres planted and from what I could see, the vines are being meticulously maintained (with the help of Cliff Bingham and his crew). Bill mentioned that he is growing the following grape varieties: Cabernet Sauvignon, Carignan, Moscato Giallo, Mourvèdre, Ruby Cabernet, Sangiovese, Tempranillo, Trebbiano, and Viognier. Most of the vines had significant early growth of 4-12 inches with plenty of grape flowers ready to morph into fruit clusters for the 2017 vintage. Everything looked great! 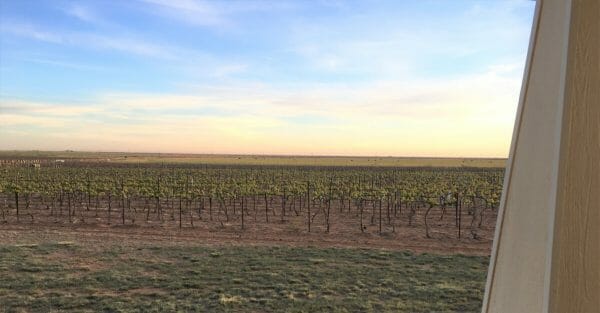 Buena Suerte Vineyards – a view from the Day’s side porch

In the vineyards were a number of frost protection machines that elicited much discussion. These machines look like a large furnace with a gooseneck exhaust pipe protruding from the top. The furnace is fueled by propane and produces hot air that is delivered through the pipe. The exhaust pipe rotates in a 360 degree pattern, spreading warm air over the grapevines to prevent frost damage when temperatures drop below freezing. These units are expensive, but are one of the key frost protection measures being installed and used across Texas, especially the High Plains, to mitigate the damage that spring freezes can impart on our precious Texas grapes. This was the first of many discussions about frost protection measures during this wine trail trip.

Because of the grape varieties that Bill had planted, I had selected several wines made from some of the same grapes to share at our wine tasting on the porch of the house. Snacks were prepared, water glasses filled and wine bottles opened and shared. We sat on the porch overlooking the vineyards to the north and west, just enjoying a relatively gentle breeze (at least by High Plains standards) and a wonderful visit about our favorite subjects – vines and wines. 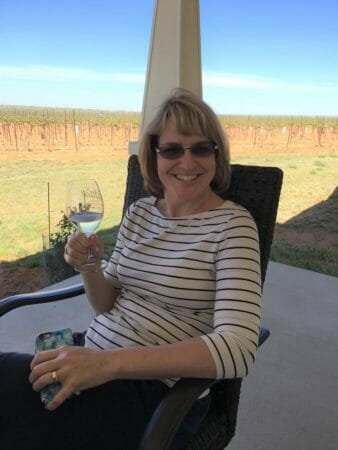 Laurie Ware enjoying a white wine (huh?) on the Day’s side porch

The list of wines we shared on the porch follows. 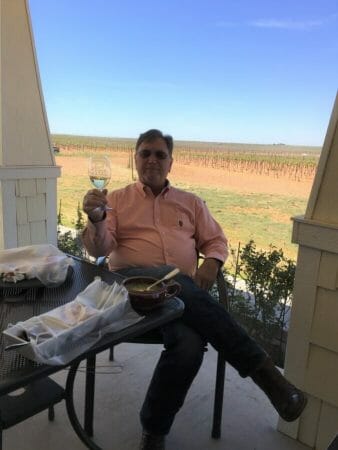 Bill Day with his Buena Suerte Vineyards in the background

Eventually we retired into the house to begin preparations for the evening meal. Bill and Gail pointed out that one interesting aspect of living in this country is frequent sightings and visits by coyotes. So, it was important that we cleared everything from the porch and Shelly’s pickup that might be of interest to the coyotes. Bill grilled some sausages while Gail prepared a simple paella dish. Soon we settled at the table for more fun discussions and, of course, more wines. Four lovely red wines were opened during the meal. The two Spanish Tempranillos were offered by Gail and Bill. They had ordered these wines from New York after experiencing them during an earlier trip to Spain. 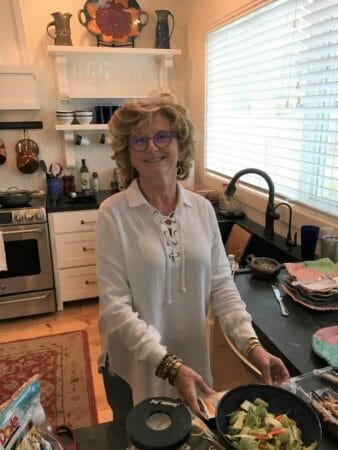 As we enjoyed the dinner, Laurie noted that a beautiful sunset was developing off the west-side porch. We trooped outside and took a number of photos of the absolutely beautiful Texas sunset. The temperature was beginning to drop and with the breeze making it seem cooler than the temperature would suggest, we all decided it would be more comfortable to step back into the house and resume our places at the table. Stories and fun conversation continued for some time, until we collectively decided it best to retire for a restful night. What a fun first day of “Carl’s Epic High Plains Vines to Wine Extravaganza.” 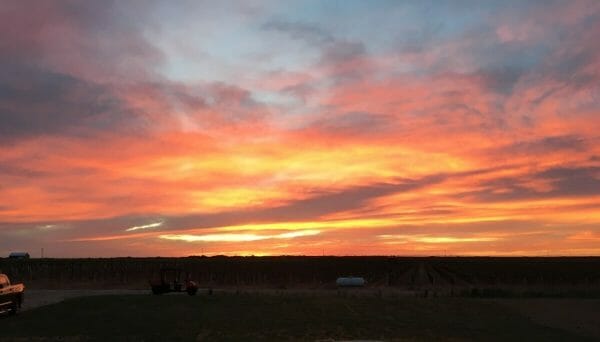