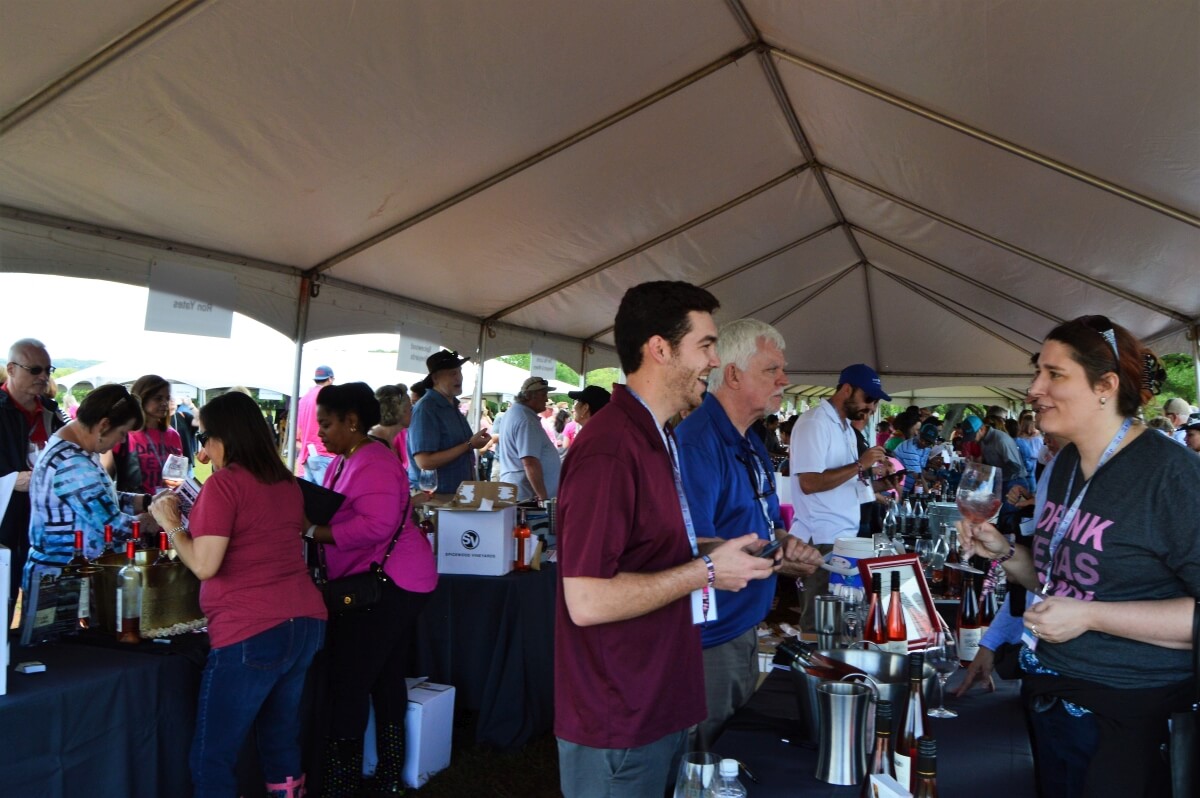 Severe storms inundated the Texas Hill Country and surrounding area just hours before the second annual Texas Wine Revolution. All morning, weather alerts reported heavy rain, strong winds, lightning, hail, and tornadoes. But just before the festivities began, the clouds moved out, the sky turned blue, the sun came out, and a cool breeze began. As guests flocked to Featherstone Ranch in Stonewall, the day grew more and more beautiful, a perfect day for rosé.

The Texas Wine Revolution is a now annual festival that showcases 100% Texas wine. Each year, participating wineries bring their rosés to the Texas Hill Country to expose guests to the diversity in Texas grapes and Texas wine. In addition, the festival is a non-profit dedicated to educating the public about the issues related to growing grapes, making wine, and selling wine that is 100% Texas.

In the run-up to the main festival, invited guests received a first-hand and in-depth look at Texas rosé. The panel, moderated by Roxanne Rouse from the Texas Wine Journal, included sommelier LaSaan Georgeson, sommelier Jennifer Beckmann (from Kuhlman Cellars and the San Antonio Chef Cooperative), Chris Brundrett of William Chris Vineyards, and Andy Timmons of Lost Draw Vineyards and Lost Draw Cellars. During the panel, they discussed favorite varieties (specifically Mourvèdre which is explored in Jeremy Wilson’s recent post), especially those for rosé; the current state of rosé; the effect of location of on wine; and the controversial Truth in Labeling bills, HB 1514 and SB 1833. 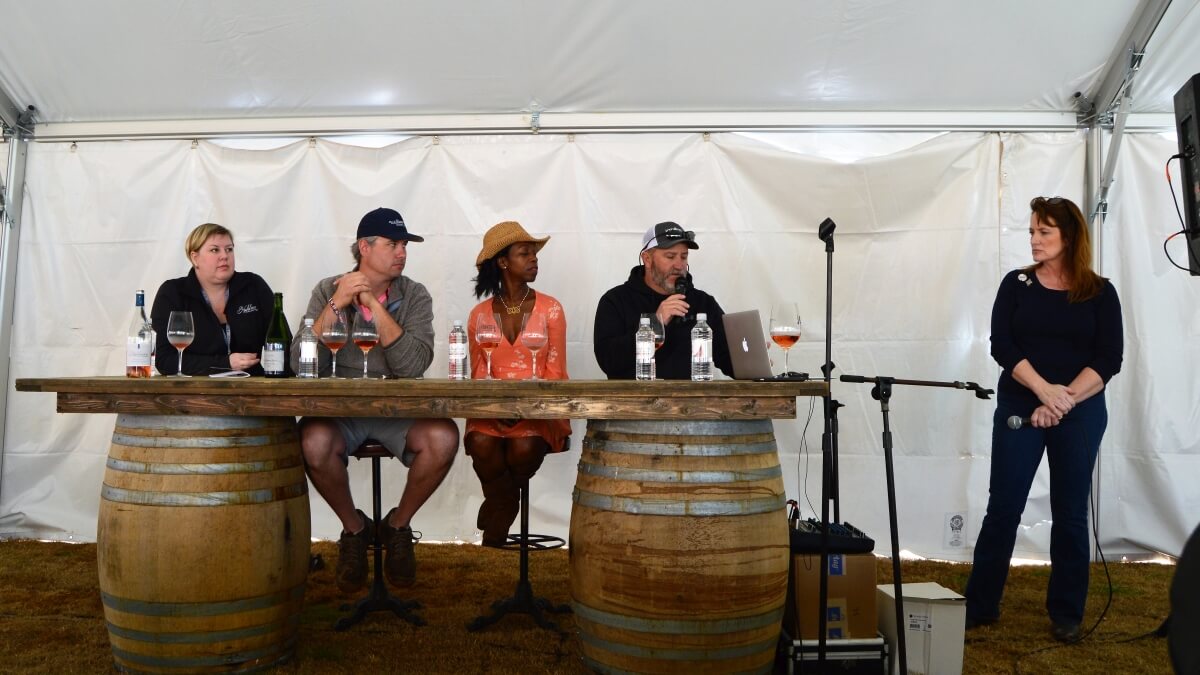 Since the whole reason for the festival is rosé, the talk turned to the state of the wine. Jennifer brought up the trends, that the number of sweet wine drinkers is decreasing, and rosé currently enjoys great growth in sales. Most of the talk did turn to the methodology behind the wine. One topic they explored was the color. Rosé comes in a diverse range of colors, and the rosés at the festival exemplified this well. Andy attributes the color to the base; the depth of color in the grape plays a large role in its color. Chris and LaSaan added to that by focusing on methodology. LaSaan explained how the length of time the juice has contact with the skins affects color: the longer the time, the darker the color. Chris mentioned other aspects; how the grapes are pressed, again connecting back to the contact time of juice and skins, can affect color.

What seemed most important to the guests was location and its role on the grapes and the wine. Chris emphasizes the “sense of place” in wines, making it a key element in his winemaking. William Chris Vineyards works hard to connect to where the grape is grown, choosing vineyards based on location and grower. LaSaan Georgeson echoed Chris’s stress on location. When she goes out to teach about wine, she focuses on region and how regions affect the distinct qualities of the wine.

But the truth in labeling bills, currently before the Texas legislature, attracted the most discussion. The whole purpose of the festival is to highlight 100% Texas grown and made wines. Right now, that important distinction is not clear with current laws. Texas follows the federal mandate of 75%: to be labeled Texas, a wine must contain at least 75% Texas grapes. The goal of the proposed bills, HB 1514 and SB 1833, would require that all wines with Texas on the label be made from 100% Texas grapes.

First, the panel discussed the reason for the need for such a distinction. Other renowned grape growing regions – California, Washington, Oregon, and New York – have laws that require near to or 100% state grapes before the location can appear on the label. These areas represent the best of U.S. wine, and many buy these wines based on origin. To gain similar respect, Texas needs to move to a similar policy. In addition, consumers of fine wines want to know the location of the grapes. All of the panelists agreed with Jennifer Beckmann on a serious point: truth in labeling is all about integrity. For Texas to exemplify that integrity, as well as have the rest of the world agree that Texas has its share of fine wines, then a truth in labeling law is needed.

However, this issue is not so simple. The situation in Texas, at least right now, makes this difficult. Currently, 25 wineries buy about 90% the grapes produced in Texas. This seems great, except the fact that Texas currently has 400 Winery G permits; that means only 6.25% of Texas wineries get most of the grapes here in Texas. The ruling would place the other 90% or so in an unfair situation.

So why, if so few wineries buy most of the Texas grown grapes, would a law like this come about? Recent increases in vineyard acreage and available grapes spurred this movement. Though the numbers improve yearly and a few vineyards (like Bingham Vineyards) have grapes not under contract, the numbers do not meet the demand. Andy Timmons explained that to make this all work best, Texas vineyards would need to have at least a bit more supply than demand, like the other four states.

Other issues hinder the situation as well. When the Texas wine industry saw its boom in 2005, the numbers of wineries grew exponentially. However, the infrastructure and vineyard acreage could not grow as quickly. This left wineries in need of grapes; they are businesses after all. To compensate, wineries turned to other regions for grapes. After over a decade of this, the habit seems hard to break. However, the future suggests they will. Infrastructure improves yearly, quickly meeting demand throughout the state, and the vineyard acreage continues to grow. Clearly, a 100% rule should occur, but when?

The panelists all agreed that Texas needs a truth in labeling law, but the point of conflict is how and when. How can this work? Jennifer Beckmann pointed out that until wineries can have success without serious hindrance, this will never really work. A gradual increase in percentage may be one way to deal with this, allowing the industry to move towards 100% as the vineyards and infrastructure grows.

Even if the vineyards can produce enough, what would wineries do about the erratic, and sometimes less than favorable weather? Late freezes in April and May do happen and damage crops (a threat it seems vineyards dodged the week following the festival). To deal with the natural misfortunes, a caveat, allowing for wineries to petition for a lower percentage in years when particularly vineyards suffer drastically, could help. If in a year when hail destroys much of a vineyard–Texas already saw that in a few locations this year–the winery using those grapes could get special compensation allowing them to use 75% as the percentage needed to be labelled Texas for that year. 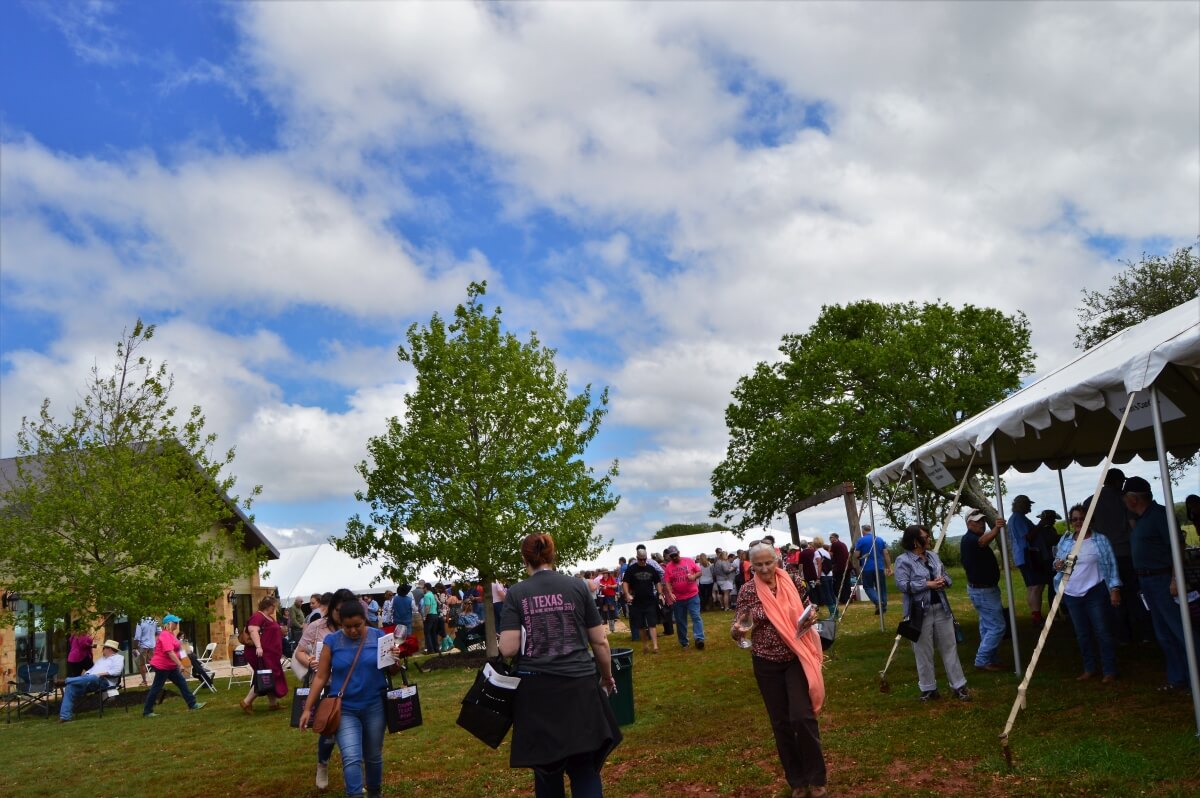 As for the festival, like last year, it was primarily held outside. That meant everyone slogged through mud to move from one winery to another and even on to the food vendors. 32 distinct wineries, with two also representing more than one, offered 40 different rosés. Of those, 16 were single variety, and 14 came from a single vineyard. The varieties provided an excellent sampling of Texas friendly grapes. Mourvèdre, the popular grape from the panel, appeared in 14 different wines, followed by Cinsaut, last year’s favorite, in 10. Other common varieties included Tempranillo, Grenache, Sangiovese (many of these single variety), Malbec, Carignan, Zinfandel, and Dolcetto. And, for most, these wines were dry.

The range of wineries provided guests with a great sample of what Texas, as a whole, has to offer. Though many of the wineries do call the Texas Hill Country home, a number available represented the High Plains, North Texas, East Texas, and the Eastern Coast. Though many of the attending wineries returned for a second year, many came for the first time, such as Compass Rose Cellars, Fall Creek Vineyards, Hilmy Cellars, Llano Estacado Winery, Pedernales Cellars, and the Winery at Willow Creek. New wineries/vineyards also took part, like Farmhouse Vineyards, Houston Winery, Ron Yates Winery (through Spicewood Vineyards, also owned by Ron Yates, attended both this year and last year), Vinovium, and Zero 815 Winery. And like last year, several rosés came from producers without a specific winery. Returning this year were Dandy Rosé and Tatum Cellars (connected to William Chris Vineyards) with the new addition of Crowson (another small producer connected to William Chris Vineyards). 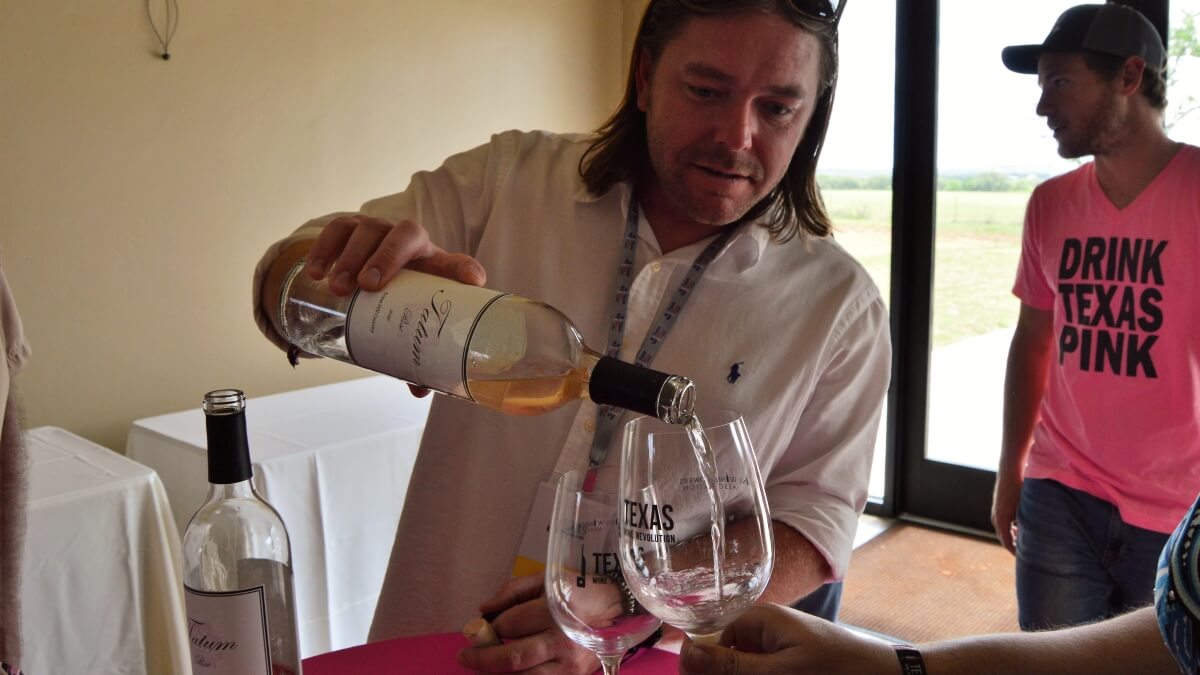 In addition to great wine, several food vendors provided an array of samples and full plates. Mongers Market + Kitchen returned this year. Other vendors included Garbo’s, Hitchin’ Post Steakhouse, and Trudy’s with South Congress Cafe. This year included dessert. Blanco-area Gillen’s Candies brought an array of unique and fine chocolates to sample and purchase. Their main sample, a chocolate bread pudding stood out; whiskey used in the recipe came from Andalusia Whiskey, Texas made spirits from Blanco. And for those wanting a bit more, Smokey’s Mobile Cigar Lounge brought their wares as well.

The large, outdoor space provided plenty of room. Guests could mingle near the entrance. Tables beneath a grove of trees provided seated respite. Among those trees, two different musical acts, Raveena Sun and Uncle Lucius, performed. The space also aided the music; the area near the wineries was far enough away from the music to allow for conversation. Additional fun cold be found at the photo booth. And for those angling for something special, the silent auction provided an array of unique Texas wine items, and other TWR merchandise, like the Drink Texas Pink shirts, were available for purchase. And of course, Jerry and Phyllis Smith won the Texas Wine Lover prize. 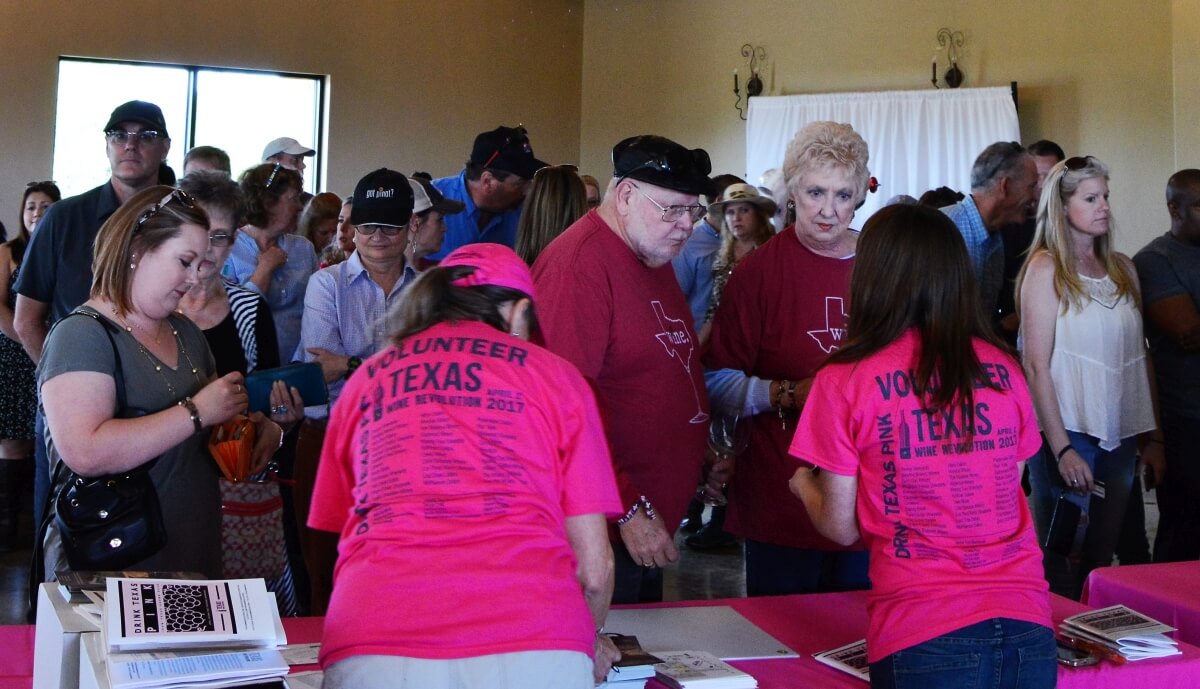 Jerry and Phillis Smith checking in

Really, it was hard to have a bad day, even with the mud. The wines provided an array of tastes and aromas, and the food provided unique pairings. And the company could not be beat, again. The Texas Wine Revolution does an excellent job promoting 100% Texas wine and Texas rosé, and provides a great time too.

Thanks for the recap. Customers love our Bingham Family Rose’, they seem to surprise themselves that they do. I love wine tasting. MJ Hawe of Bingham Family Tasting Room Grapevine