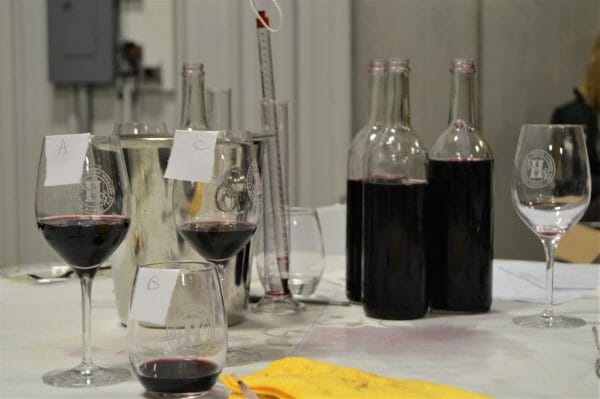 On the first Sunday of March, Sean and I spent an afternoon in the production facility at Hye Meadow Winery. We gathered with another 20+ people, as well as Mike Batek, Lisa Nimmo, and Joe Grubb, to create the next vintage of Il Sensio.

Hye Meadow, like a number of wineries throughout the state, have dedicated blending parties. At the parties, groups work together to create the best blend. In most that I have attended, we have worked with red blends, but I have had a white or two thrown into the mix. After blending, blind judging begins. The judges go through each wine looking for certain elements. Then, they come back together to decide which, based on their notes, is the best. And at every party I have attended, the winning groups get some sort of prize, but the prize is entirely dependent on the winery.

For our recent experience, we started with four different varieties; three being Italian varieties and all the grapes coming from Texas. The Aglianico and Montepulciano came from Oswald Vineyards, the Dolcetto came from La Pradera Vineyards, and the Petit Verdot came from Bingham Family Vineyards. I counted us lucky to get to work with 100% Texas High Plains fruit. To help each group, Joe provided facts sheets about the varieties, focusing on each grape’s signature qualities.

Before we began, Mike, Joe, and Lisa gave us a bit of help. They talked about what they looked for in a good wine. Joe, the cellar manager at Hye Meadow, prefers balanced wines with character. He admitted that he really liked the last Il Sensio, which is sold out. Lisa likes bold reds with long finishes. And Mike, well, he was a bit elusive. 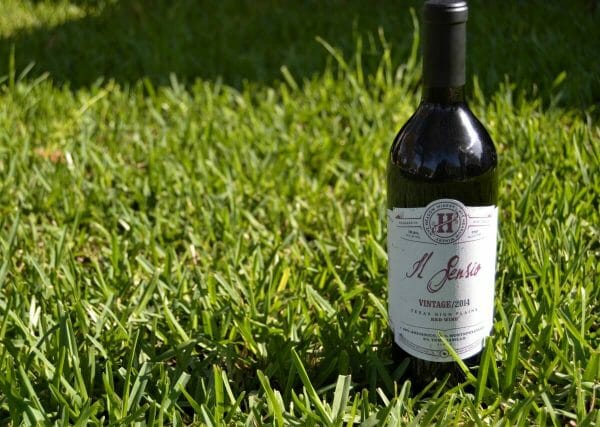 With information in hand, the groups proceeded to experiment. Sean and I were joined by Lisa Nielsen, Lisa Pasquier, and Danny Pasquier. At first, we tasted all the wines and did mini-blends on our own. Once we found a mini-blend we liked, we made a full serving. We started with my mini-blend, a mix of all four wines with an emphasis on the Dolcetto and Montepulciano. From there, we began tweaking it, looking for a wine with an appealing nose, balanced and complex taste, and a long finish. We ended up with four blends based on that starting blend and let them sit and breathe.

As we waited, Sean decided to make a blend so he could have a complete, full glass of wine. He chose to blend the wines we had in larger quantity, and so he blended the Aglianico, Montepulciano, and the Petit Verdot. After he let me taste, I knew he would not get to drink the whole glass. The entire group really liked it, so we set it aside with the others. We continued playing around, as we had quite a bit left, but never could capture the same sense of completeness that the other blends had. 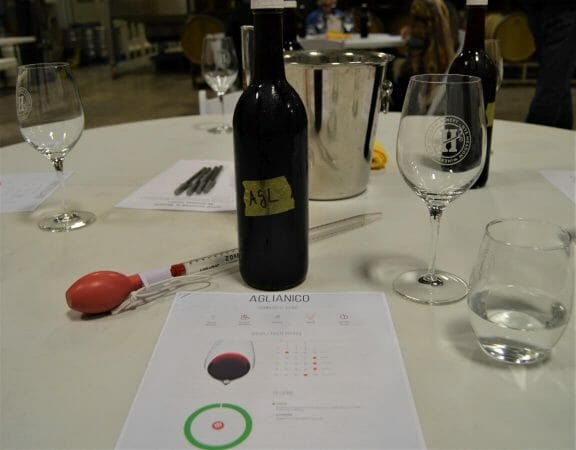 As we came close to the end of blending, we did one last check. We found ourselves torn between two. We decided to go with our crazy, random blend: 50% Aglianico, 30% Montepulciano, and 20% Petit Verdot. As the judges began their tasting and discussion, everyone mingled and tasted one another’s wines. It was a very interesting lot with different approaches, and we found we were not the only one to go 50% with one of the varieties; however, three groups used 50% Montepulciano and one went with 50% Petit Verdot. 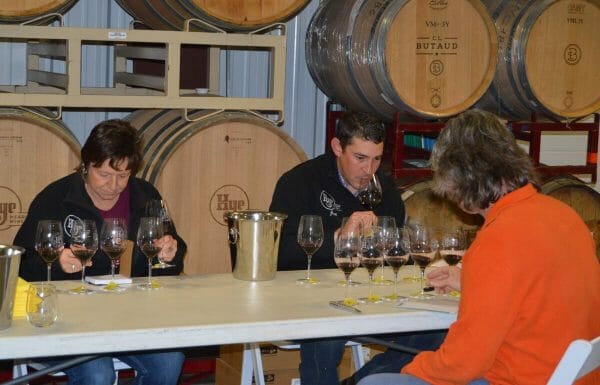 The judges came back to a nervous but happy group. Mike went through each judges’ process for tasting, including how they all seemed to agree on their top wine. Before making the final announcement though, Mike went through each wine, presenting their strengths. When he got to ours, which happened to be last, I was surprised to find that we were the winning blend. After many sad defeats at other blending parties, Sean and I were amazed that our luck had changed.

And what did we win? Well, our group will have their names on the label. We must wait though, as the wine needs to sit and age in barrel. We were assured that the quantity will be much larger than the recently released 2014 blend, which only had enough to fulfill wine club orders. So that means, when the time comes, we will be able to share it with more people. And next year, someone else will claim the prize. 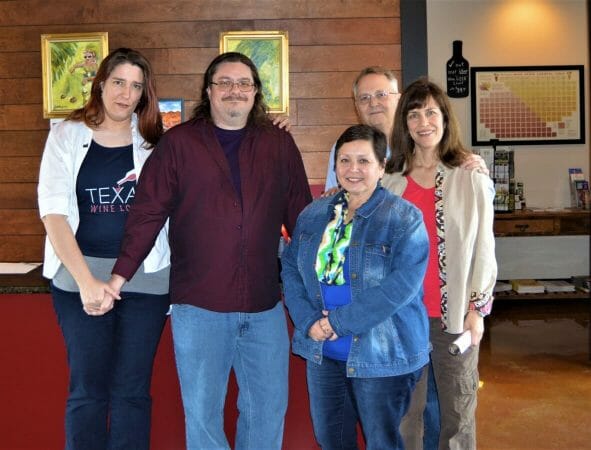 Winning group with Robin and Sean on the left