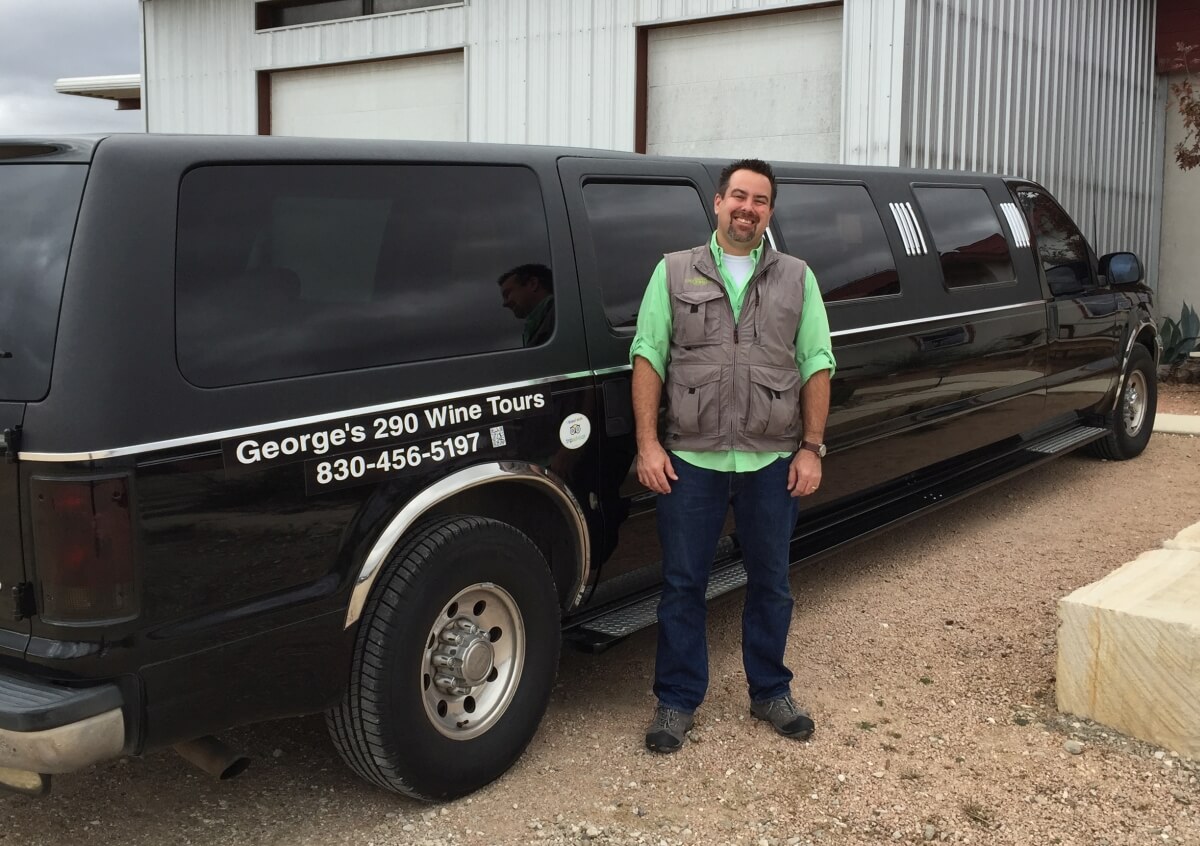 As with most tour companies, there are a number of tours and options you can select so you can personalize your wine tour. George’s standard tour, which is the most popular, includes a picnic lunch from Peach Tree Restaurant and starts in the morning. The ride along I went on is called the Short Tour that starts at 1:00 p.m. and includes three winery stops. Of course, the best part of a wine tour company is they will pick you up at your hotel or other lodging choice so you do not have to drive at all, making the winery visits very safe for you and others.

I arranged with George to be picked up at the Fredericksburg Visitor Center since I was going to be arriving in town and had not yet checked into a hotel. When the black Ford Excursion stretch limo pulled up, I knew I was going to be in for a luxurious and fun time. The limo can hold 12 people, but George likes to keep the maximum number at 10 people if possible to make it more comfortable. Already in the limo was mother and daughter, Rhonda and Katie. They were the only ones going on the Friday tour, and George will combine small parties for the Short Tour to fill the tour and make it more enjoyable for everybody. 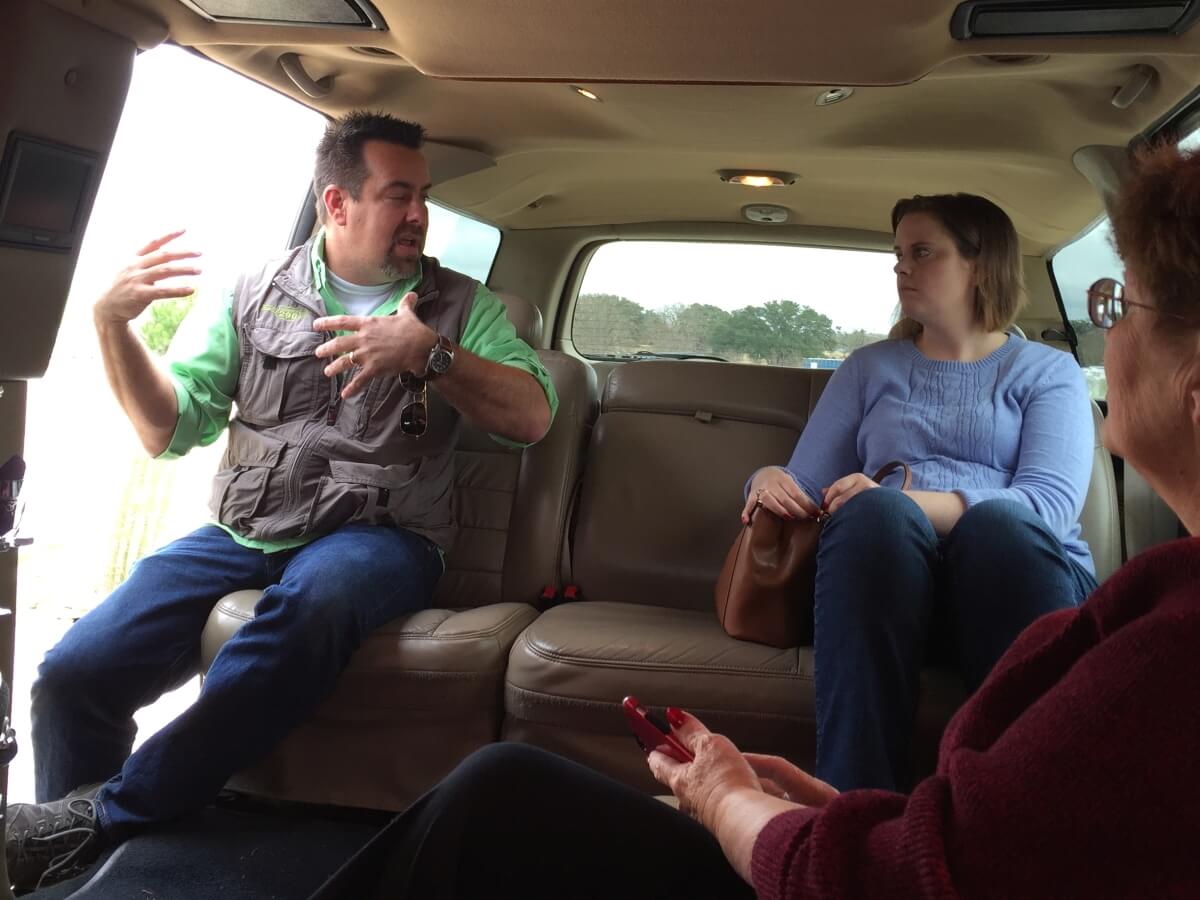 On the way to our first winery, George Burns explained how he was a lifelong resident of Fredericksburg. He first started working with other wine tour companies in 2000 before starting his own tour company in 2012. George has one limo with two drivers when he cannot drive, and during the week, he teaches Spanish at a Fredericksburg high school. George’s 290 Wine Tours is available seven days a week, but most tours are done mainly on Saturday. George has his own favorite wineries where he knows his customers will have a great time, but will go anywhere the customer wants.

He also answers any questions you may have about the wineries, Fredericksburg area, and other attractions. If you have been to Fredericksburg, you know peaches are very popular. We learned from George that before peaches became popular in the 1980s and 90s, that Fredericksburg was known for peanuts.

It seemed like a short drive as we arrived at Hilmy Cellars for our first winery visit. Thanks to George, Hilmy Cellars already had a tasting set up for the three of us and that was the way it continued through the rest of the day. Wine club manager Tom Luck handled our tasting. The first question asked by Tom was if we wanted to taste the six wines on the tasting menu or 11 wines. There was a chuckle and Tom started with the first of 11 wines. 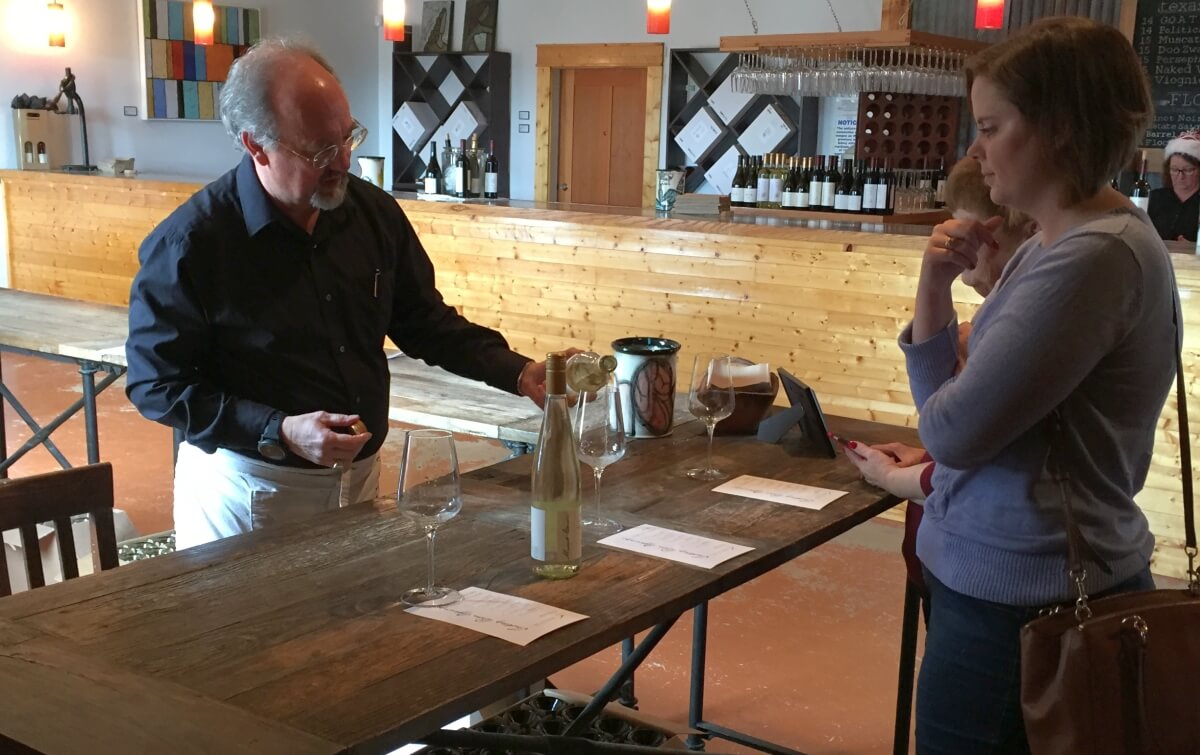 Hilmy Cellars prefers to pour their wines from lightest to heaviest regardless of dry or sweet, so the first wine tasted was a sweet. These are the wines tasted:

It had been a great start to the wineries tour and everyone enjoyed themselves at Hilmy Cellars. After purchases were made, George was heading down the road to the next winery on the tour, CALAIS Winery. I thought I was finally going to be able to sit in the rear of the winery at the table, but owner Ben Calais said that is only for the weekends, so we enjoyed our tasting at the front tasting bar. The other thing I learned is the wonderful bread that Ben makes is again only made on weekends. But during the week, bagel crisps are given to cleanse your palate. 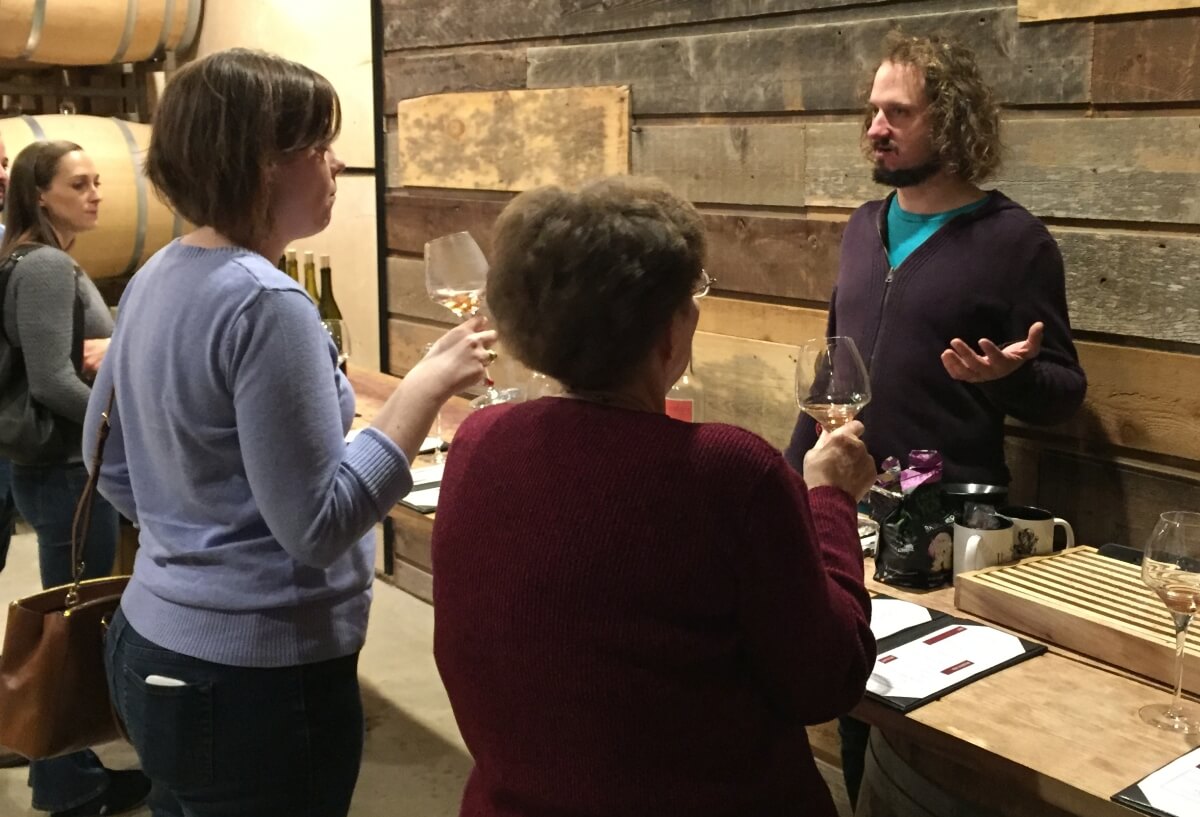 These are the wines that were tasted during our visit:

There is a limited number of wines available now for tasting and selling, but there should be a full tasting menu available in 2017. One interesting fact is all the wine names are places around where Ben lived in Dallas or now in Hye.

From CALAIS Winery, it was a short drive back toward Fredericksburg and Hye for the last winery, William Chris Vineyards. George brought us to the front Hye Society Lounge tasting room first and turned us over to the staff. A sampling of Blanc du Bois was had while we waited for the tour to start. This was going to be a special tour because it was William Chris’s Barrel Tasting tour where you get to taste wine samples straight from the barrel or tank while touring their production facilities. 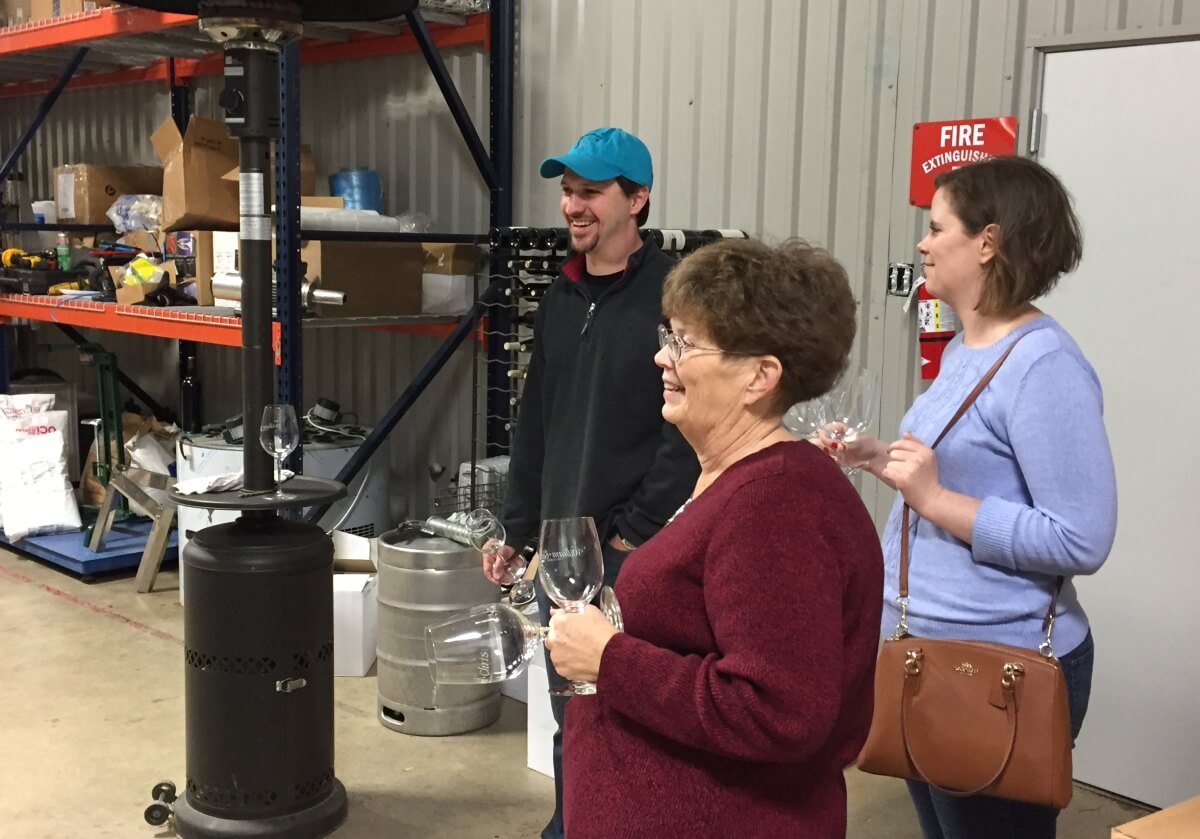 Anthony Harvell was our guide for the tour and we stopped by the first building which now houses William Chris’s new bottling line which will definitely make bottling at William Chris a lot easier. We next went into one of the two production areas where the barrels and tanks were, and the tasting began. Anthony commented how he doesn’t totally follow the schedule, so we had the chance to taste some wines that were not planned. Also what was unplanned, was running into co-owner Chris Brundrett who was giving his own tour. That was a treat for the members of our tour group because they got the chance to taste some extra wines that Chris offered everybody.

As we wandered from building to building, Anthony kept offering tastings from the barrels. Everybody in the wine industry will agree that a wine from a barrel or tank does not usually taste like a finished wine, but it is a lot of fun tasting wine that is unfinished, because it gives a great example of imagining what the finished product may end up being. At the end of our tour, we ended up at a table in one of the production buildings and had tastings of some finished wine. William Chris Vineyards did things nicely with a personalized tasting menu for each person along with a very nice meat and cheese platter. It was an excellent ending to the last winery visited. 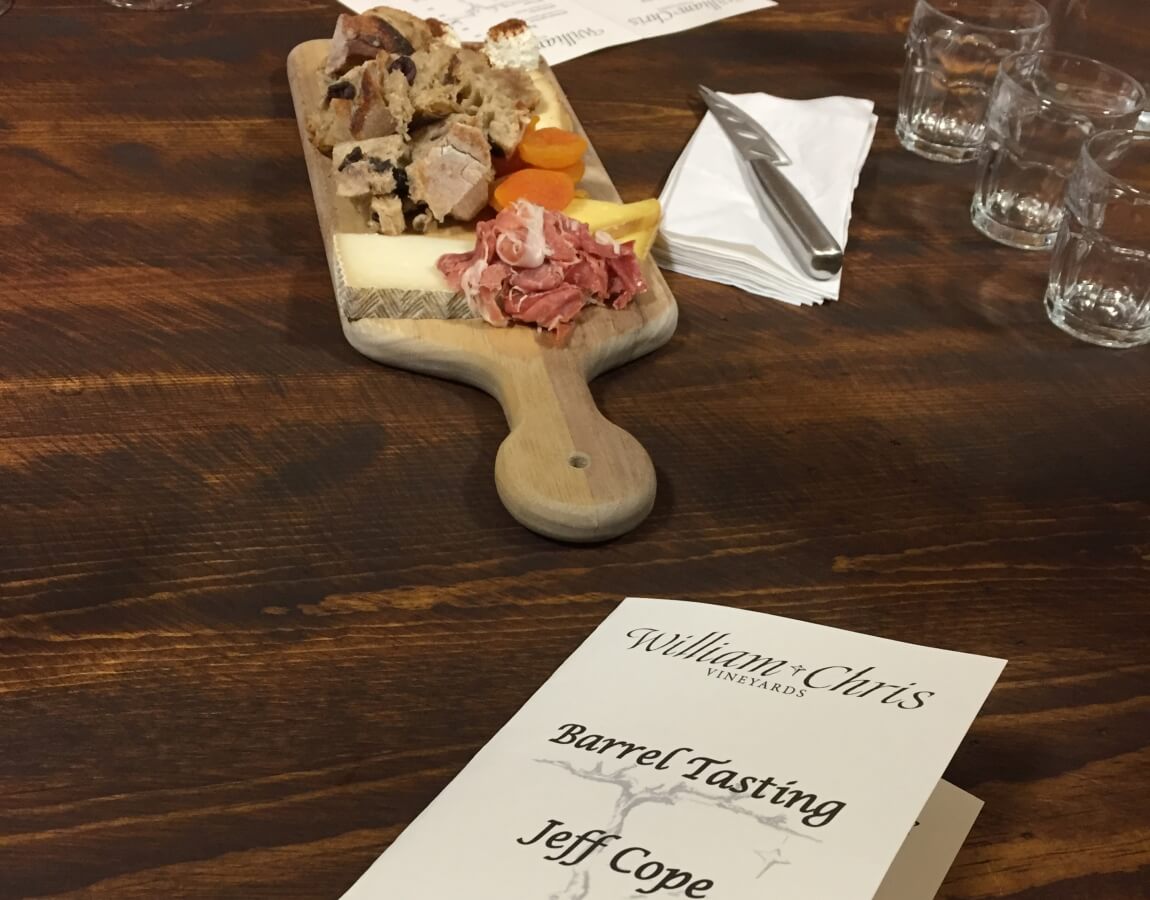 We boarded the limo and George started our drive back to Fredericksburg. As mentioned before, one of the nice things about a winery tour company is they will drop you off at your lodging so you will not need to drive. On the way to Rhonda and Katie’s lodging, everyone agreed the afternoon had been a lot of fun and the tour was a great way to visit wineries. Rhonda and Katie summed it up very easily. They mentioned their husbands wanted to go to Enchanted Rock for the day. The women simply said, “Enchanted Rock or wine? Okay, we’re calling George.”