On January 24, 2017, Texas Wine Lover attended a special tasting of five cavas from Gramona hosted at the Vine Vault in Austin. Ana Lopez, Export Director for the winery, provided an informative historical overview and discussed the philosophy that guides Gramona in their quest to produce the highest quality organic cavas. Their vineyard dates back to 1850 and the Celler Batlle dates to 1881. The cellar is three floors deep with underground caves housing both white and sparkling wines dating to the 1930s. Five generations strong, this family business in the town of Sant Sadurni d’Anoia, is located 18 miles south of Barcelona, Spain. The Batlle family founded the vineyard and winery and through marriage merged with the Gramona family, with the name of the cellars officially changed from Batlle to Gramona. A second winery was added to their properly in 2001 with a nod to sustainability using 50% geothermal energy and recycled rainwater. Now wines are produced in the new winery and aged in the old winery.

Vineyard practices are organic and biodynamic, using medicinal plants and herbs and compost harvested from cows and sheep raised on their farm. The vineyard comprises 50 hectares of vines on the 124 hectare property. The phases of the moon and planets are incorporated into decisions regarding the timing of vineyard activities. The region varies from sea level to 800 meters above sea level, offering different microclimates to support a variety of grapes. The original plots of Xarel-lo grapes grow in La Plana while the Macabeo and Xarel-lo fruit grown in the Font Jui plots are most prized. The Chardonnay is grown at a higher altitude in the Escorpi area. The Xarel-lo grape, is ancient in the Mediterranean region, and is mainly grown around Barcelona. The grape is the chief grape in their cava, due to its ability to age extraordinarily well.

Gramona’s cavas are made using the traditional methods of champagne production, with manual disgorgement and hand riddling. Before bottles are topped with natural corks, they are topped off with expedition liqueur via dosage from their century old solera system. This imparts taste and character from prior vintages into new cavas, continuing a time honored tradition that passes a bit of history into successive vintages. 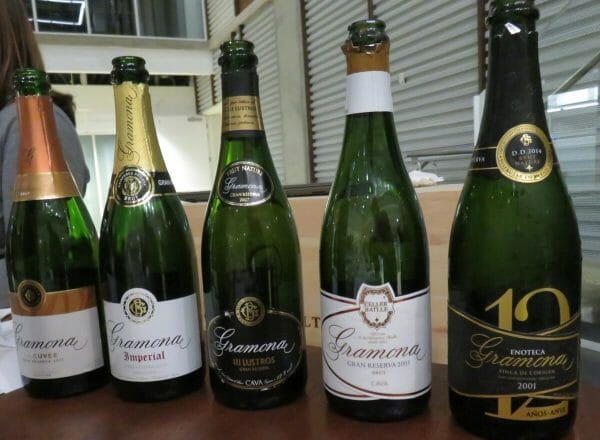 The 2012 Brut Gran Reserva La Cuvee was aged three years and contains 70% Xarel-lo and 30% Macabeo grapes. This cava was very light in color with yeast and cork on the nose and a multitude of tiny bubbles amid bright acid and sour green apple and yeast on the palate.

The 2010 Brut Imperial Gran Reserva made with 50% Xarel-lo, 40% Macabeo, and 10% Chardonnay fruit was aged five years. This is Gramona’s signature cava and is primarily consumed near Barcelona with a scant 20% shipped abroad. The color was light yellow and good intensity and apple and citrus on the nose. On the palate, it demonstrated a higher density and more structure with velvety bubbles, light yeast, baked pastry, and bright fruit making this an ideal every occasion sparkling white. 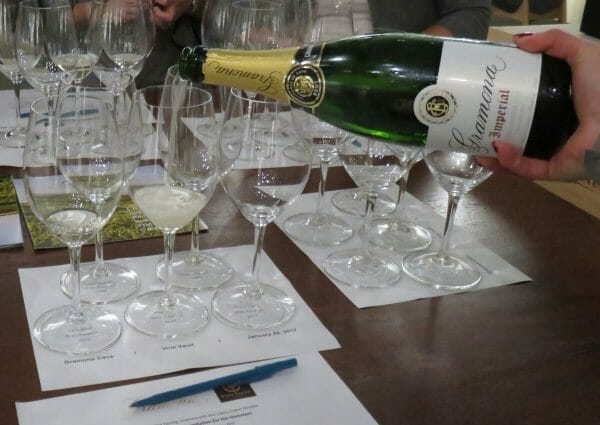 The 2007 Ill Lustros Gran Reserva aged seven years with grapes from the original plot, making it a single vineyard varietal. This cava comprised of 75% Xarel-lo and 25% Macabeo grapes had a pale yellow color with baked apple, pear and some citrus on the nose. The bone dry sparkler had toast, almond, and toffee notes on the palate. The balanced structure of this cava is ideal for food pairings from appetizers to main courses.

The 10 year aged 2005 Celler Batlle Gran Reserva, also a single vineyard varietal, was crafted with 75% Xarel-lo and 25% Macabeo grapes. This Brut only had 7,000 bottles produced with only 300 available to the U.S. This was the first time this pale straw yellow cava was poured in the Texas. The nose bespoke hay, toast, and pastry while the refined cava unfolded in softer bubbles with notes of honey, vanilla, praline, and stone.

The rarest, 12 year old bottle of 2001 Etoneca Gramona Brut Nature, made with 75% Xarel-lo and 25% Macabeo was the evening’s highlight. It is currently the oldest cava available and exuded a beautiful soft golden color. This had the most refined character with candied fruit, apple, pear, and bakery notes on the nose. The expressive sparkler yielded tiny, velvety soft bubbles with balanced acid and brioche pastry, toast, cocoa, and toffee on the palate. Only 2,000 bottles were produced and all were hand labeled, numbered, and laid to rest in impressive presentation boxes. Bottle 305 was thoroughly enjoyed by all attending this tasting. 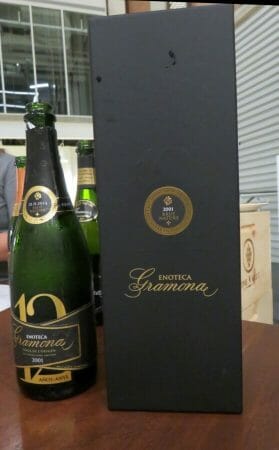 The Gramona cava tasting was a definite treat and educational adventure. Expanding our minds and our palates via tastings continues to broaden our understanding of different varietals and how sense of place and methods of production can impart major differences and subtle nuances in wines produced globally. For those interested in learning more about Gramona’s wines and cavas you can check their website at: www.gramona.com. Anyone interested in purchasing any of the bottles highlighted in this article, can contact Austin Wine Merchant at: www.theaustinwinemerchant.com. For more information on Vine Vault Austin, you can see their website at: www.vinevault.com.