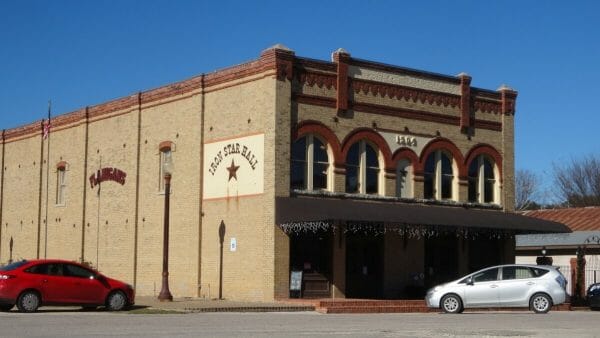 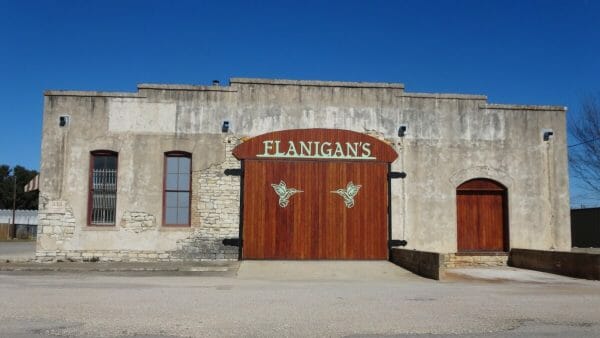 Flanigan’s is easy to find in the small town of Bertram alongside the railroad tracks that run through town. On one side of the street is a building stating Flanigan’s, which is the production facility. On the other side of the street is the Iron Star Hall building originally built as a lumber and hardware store in 1904. Iron Star Hall was even used for movie scenes throughout the years including the 1998 movie The Newton Boys. Now it is the home of the tasting room for Flanigan’s Distillery & Winery.

As I walked into the tasting room, I was greeted from the other side of the large room and I could also see why this beautiful interior was used in movies. There are a number of tables in the center of the room where people can enjoy a meal. On the left side of the tasting room is a long tasting bar and that is where I headed first. 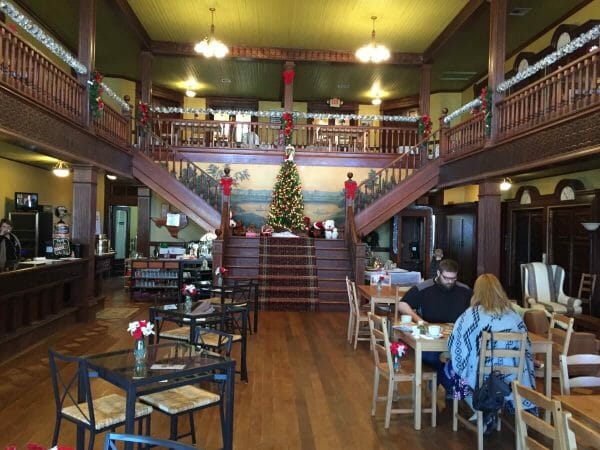 I met both Kevin and Dana Flanigan, and while not at the winery, he is a surgeon while she is a lawyer. But today, Kevin was going to handle my tasting. As expected, tastings are done at the tasting bar and the uncorked wines are poured with measured pourers. There is a tasting fee for the current four wines that Flanigan’s has, and for a little higher price, you can get a souvenir glass. At the beginning of my tasting, I also met Cindi Reynolds who is the general manager. Cindi and her husband Ted Reynolds also own the South Vineyard at Pilot Knob.

These are the wines that Flanigan’s had at the time of my visit:

The tasting held is uniquely different from common tastings. Kevin and Dana have sommelier certification experience and that is how the tastings are presented. Kevin first began the education by explaining the purposes of the actual wine bottle. Then he continued going through the educational process with you by looking first at the clarity, and then smelling the aromas of the wine using three different zones in the wine glass. The taste comes next, but first you must hold it on your tongue for 12 seconds while Kevin counts with his fingers since he is also holding the wine on his tongue at the same time. You can finally swallow and enjoy the final taste of the wine.

With the first wine of Viaggio, Dana provided a food pairing with smoked salmon which is smoked in house. The pairing was great and the salmon was excellent. I could have had a meal in itself with more salmon! And in fact, you can, as there are a number of meals available—more on that later. Another food pairing came later with another wine.

During the tasting, I asked Kevin who the winemaker is and he said he’d have to let the business person, Dana, answer that question. Near the end of my visit, I did ask Dana and she said all the wines are made at the winery, and the winemakers are both Kevin and Dana Flanigan along with Ted Reynolds. If that is the case, I am confused why Kevin Flanigan could not answer that question. 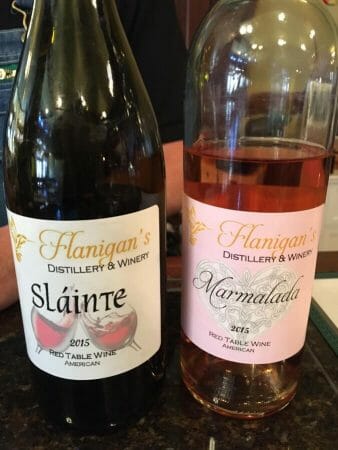 But the next wine on the tasting menu was Sláinte which Kevin explained translates to health, but is used as a drinking toast in Ireland. So Sláinte to each other, and then we were off to taste the Sláinte. We finished the wine tasting with the Marmalada.

Normally that would end my visit for tasting, but no, Flanigan’s is also a distillery and Kevin highly suggested I do a tasting of their spirits. Who I am to disagree? There is an additional tasting fee for the spirit tasting and that also includes four spirits to taste.

These were the spirits available at my visit:

When we tasted the two whiskeys, Kevin made a point to show the difference in taste with whiskey distilled from corn versus potatoes. The potato whiskey was a little creamier and softer on the palate.

The Grappa was made from grape pomace, which are the leftovers after grape pressing. Grappa is from an Italian origin and instead of throwing away the leftovers, they take them to a grappa producer. Grappa is commonly served after dinner to aid in the digestion of heavy meals.

It was an interesting spirit tasting and Kevin did say that he does make the spirits there at the distillery. 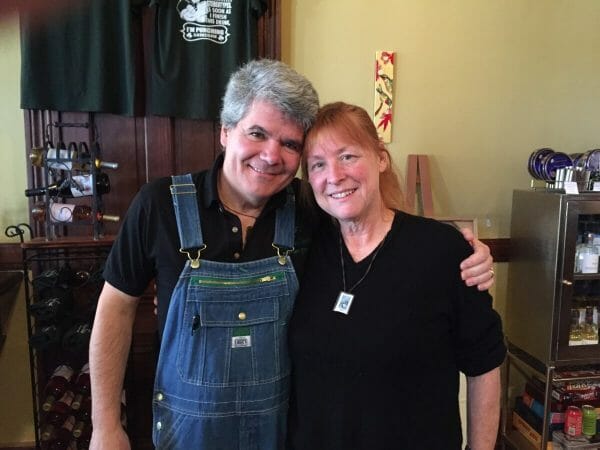 After the tastings, I was confused by one thing. At Kiepersol, they specifically had to keep two separate tasting rooms for the distillery and winery, and there is a clear dividing line where you cannot bring one drink from one tasting room area to the other side. At Flanigan’s Distillery & Winery, all tastings were served from behind the same tasting bar. I had to ask Dana Flanigan how they were able to do that. She said they actually had talked to Marnelle Durrett of Kiepersol prior to opening and knew of the legality regulations. Their lawyer was able to work within the law and allow Flanigan’s to serve both spirits and wine at the same location. Let’s hope to see more wineries adding distilleries or breweries, if possible, to their business as it makes a nice destination for families who all may not prefer just wine.

Also at the winery and distillery is a small gift shop selling clothing. There is also a wine club one can join. Oh yes, there are also full meals and snacks served in the tasting room. Besides the previously mentioned House Smoked Salmon, sandwiches available are Corned Beef, Turkey, Ham, and Grilled Cheese. There is also a Back Porch Special which changes daily. On Sundays, you can enjoy a special meal such as Ploughman’s Lunch, Fish and Chips, Bangers and Mash, or a Pub Style Burger.

Flanigan’s Distillery & Winery has a lot going for it and with additional wines and spirits in the future, there will be even more of a reason to visit Flanigan’s in Bertram.