On January 21, Compass Rose Cellars kicked off their 2017 monthly Saturday Supper Club in Hye with a nod to the upcoming Lunar New Year, offering a delightful Asian inspired five course dinner to a sold out crowd. The chef for the night was Ashley Odem of Feast and Merriment, who worked creative magic preparing dish after dish that delighted guests gathered to celebrate the start of the monthly celebrations of great Texas food and wine.

Guests were offered the option to purchase wine by the glass, the bottle, or a special pairing of five Compass Rose Cellar wines. The wine pairing option was chosen to experience what the chef and owner Mark Watson felt were the best wines to complement each course. The pairing wines featured included, 2015 Chenin Blanc, 2015 American Chardonnay, 2015 Texas Chardonnay, 2014 Random Lines, and 2012 Iron Spike, which was not the original dessert wine that was on the menu for the pairing, but something special pulled from the library that evening. 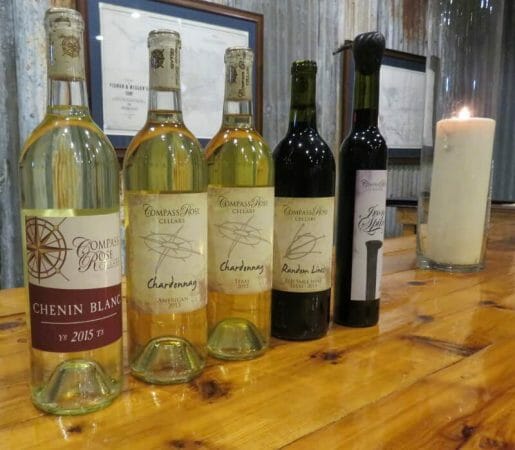 Festivities were held in the covered patio adjacent the tasting room, which was enclosed in plastic sheeting protecting from the windy cool night air. A band played as everyone arrived and got seated. The long wooden tables shined awash in warm candlelight from tall white pillar candles set down the center of the tables. Place settings were set with a traditional Lunar New Year red envelope decorated with a gleaming golden rooster and chick design laid atop black napkins. Envelopes contained the chef’s business card with a note of thanks and offered words of wisdom for the coming year. 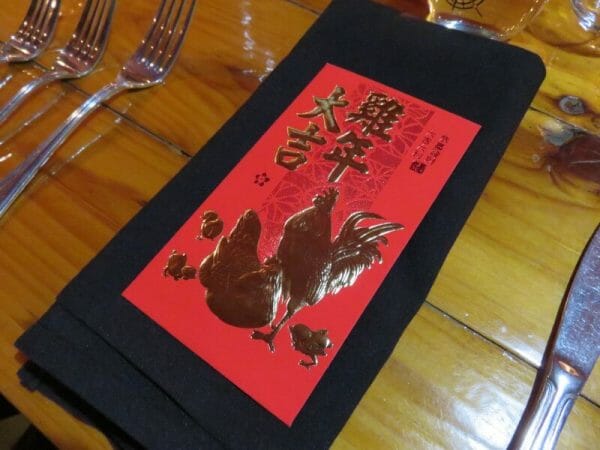 The dinner started with Mark thanking everyone for being there on an evening marked by a little bad weather followed by an introduction of Chef Ashley Odom. Chef Odom started her business nine years ago in Colorado, but relocated to Central Texas to the Stonewall area in 2015. She enjoys the creative energy of working with clients to create unique events and likes to elevate Central Texas ingredients by pairing them with global influences. Chef Odom explained the first course and wished everyone enjoyment of the journey ahead.

The first course of mint pea wonton soup in miso broth with ginger, Napa cabbage, and red beet micro greens was simple and elegant. The dish paired well with the 2015 Chenin Blanc. The wine featured fruit sourced at Martin’s Vineyards in the High Plains. The bright citrus and acid in the stainless aged Chenin were a beautiful balance to the salty and earthy notes of the soup. Bowls were promptly emptied with pure delight. 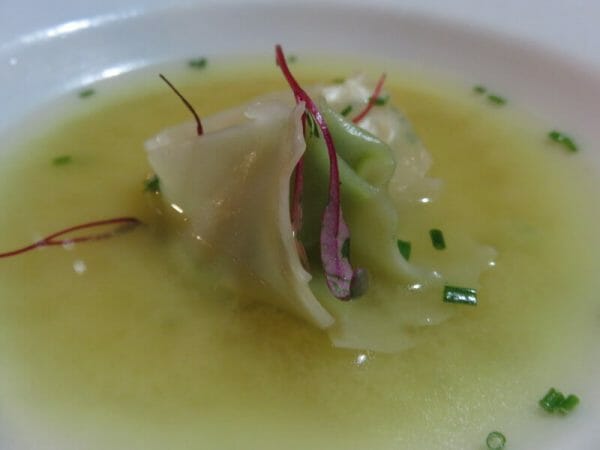 The soup was followed by a duck, carrot, and water chestnut egg roll drizzled with cherry-aioli nestled atop a bed of red cabbage dressed in sesame vinaigrette. This course was paired with the 2015 American Chardonnay, comprised of 60% Mason county fruit from Robert Clay Vineyards and 40% Washington state fruit. The egg rolls arrived crispy and hot while their aroma wafted from the kitchen into the dining area capturing everyone’s attention. Guests enjoyed the duck stuffing and the crunchy sesame cabbage. This unoaked Chardonnay had light petrol and yeast notes, with citrus and low acid, and paired nicely with the duck. Those drinking red wine versus the pairing, raved about how their wine highlighted the beauty of the duck. 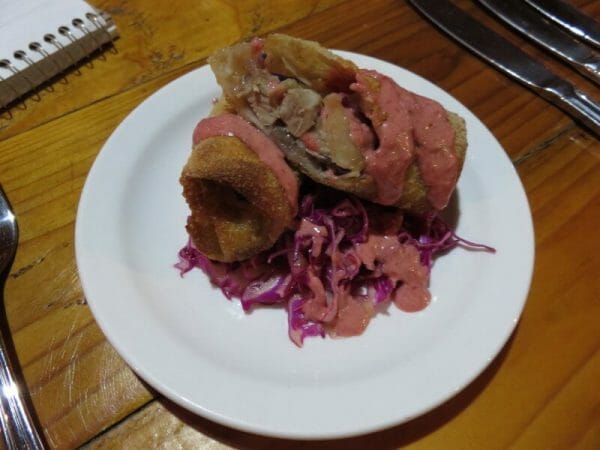 The third course featured a rice wine braised and caramelized pork belly served with charred Brussels sprouts with cranberries in a sriracha, sesame, ginger, garlic vinaigrette. This dish was paired with the 2015 Texas Chardonnay, made from 100% Mason Country fruit from Robert Clay Vineyards which aged in French Oak for 13 months. The light acidity, beautiful oak and green apple, bright pear, and light coconut tropical notes in this wine made it a delight to drink. The dish paired fine with this wine and could have withstood something sweeter. The pork belly was a huge hit, with many longing for second helpings. 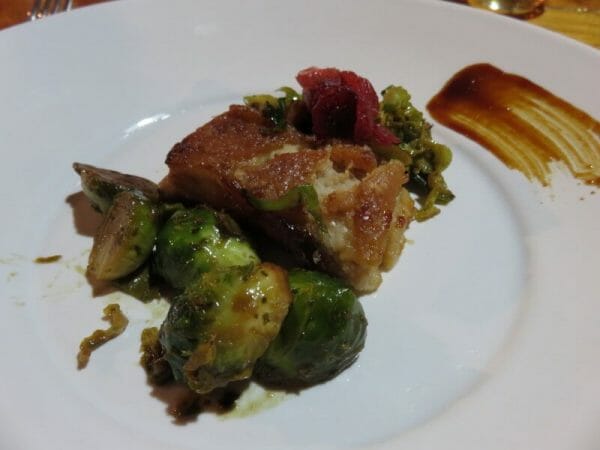 Moving onto the fourth course meant shifting gears from white to red wine. The beef negamaki , a rolled flank steak, was stuffed with grilled shiitake mushrooms and green onions, and served atop a sweet potato pasta (think shaved sweet potato that looks like thin, short little noodles) with a plum and ginger sauce. The wine pairing was the 2014 Random Lines, a red blend of equal parts Cabernet Franc and Petit Verdot from the High Plains and Ruby Cabernet from Mason county Robert Clay Vineyards. The wine was drinking well showcasing bright fruit and pepper on the nose and a deep purple hue in the glass. The fruit with its oak, slight pepper, and smooth velvety tannin finish was a big hit with this course. 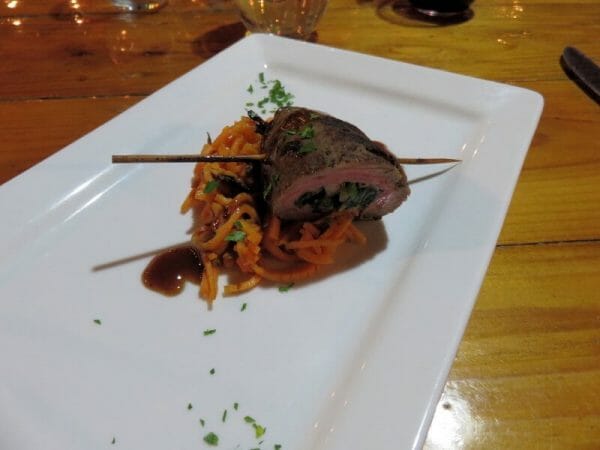 The dessert was fabulous featuring a glass of lychee panna cotta and mango coulis with fresh mangos and coconut flakes accompanied by a piece of black sesame seed brittle. This arrived with a sparkler fully engulfed in stellar celebration of the evening. As a special treat, some of the last bottles of the Iron Spike Madeira style wine were pulled from the library. This wine has been sold out for over a year with no further bottles available for purchase. The dessert was fairly light and tasted like Hawaii in a glass. The wine popped with bright cherry on the nose and prunes, and sweet cherry notes on the palate. The sweetness of the wine was a nice way to cap off the evening and all enjoyed every luscious sip of this special treat. 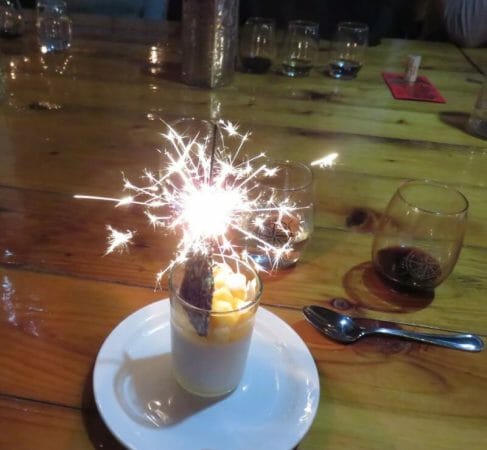 As an added bonus, the 2012 Syrah was brought from the library as one more special surprise to round out the evening’s celebration. This wine with fruit from Mason County had a bolder acid content than its earlier red predecessors and featured a bit of spicy green pepper on the palate.

Once again, Mark and Chef Odom thanked everyone in attendance. Mark went on to provide updates on upcoming supper club dinners and events in the works for 2017. February will feature two supper club dinners and something new is being planned this spring to feature a musical evening fundraiser that will be something special to look forward to as this year’s calendar of events gets finalized.