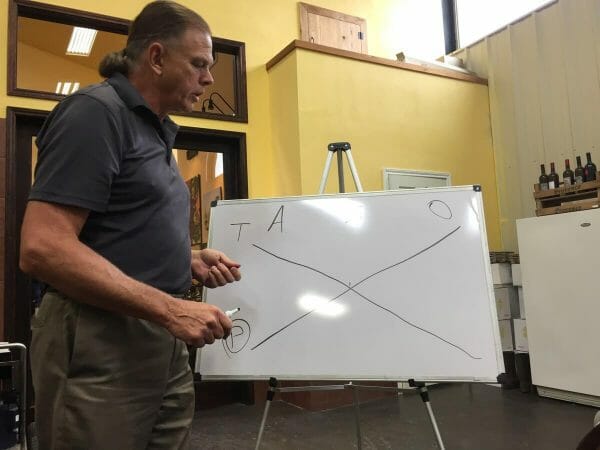 Dan Gatlin during Taste With The Winemaker

Inwood Estates Vineyards in Fredericksburg has a number of opportunities for Texas wine lovers to enjoy their wines. Besides the Bistro and Wine bar and the reserve tasting room, there are two other tastings offered. One is called the Super Flight, which is a private, seated tasting with winemaker Dan Gatlin where he compares three flights of Inwood Estates limited production wines to their international counterparts. These wines can range up to $225 per bottle, so you are definitely tasting and comparing some outstanding wines. The current fee for the Super Flight is $45 per person with a discount for wine club members. Reservations are required.

Another tasting opportunity is Taste With The Winemaker. This is a seated tasting in the production area of the winery featuring a personal tasting experience also with winemaker Dan Gatlin. The current fee for this tasting is $25 per person. Reservations are recommended.

I have wanted to try Taste With The Winemaker, and the last time I was in the Fredericksburg area, I made a point to make an appointment to do just that. Dan Gatlin is one of the pioneers in Texas wine and has been perfecting the art of winemaking for over 30 years. I previously did an interview with Dan almost four years ago, so I knew I was going to learn a lot from the tasting.

I arrived at the winery and was directed to the production room of the winery, which is located behind the reserve tasting room. I met Dan again and I had expected to see other people participating in Taste With The Winemaker, but it ended up being just Dan and me. I guess people do not know that it exists or what it entails.

Dan started at the whiteboard explaining his philosophy of winemaking including how he has certain requirements when he works with a vineyard to get the grapes at exactly the time and quality he wants. The time to harvest is instrumental in order to make a great wine. He mentioned how he has worked with Neal Newsom of Newsom Vineyards over the years and ironically, I had just talked to Neal prior to heading to Inwood Estates. Neal had commented how Dan’s requirements are very strict and he never thinks it will work, but in the end, Dan Gatlin is right and the wines come out great.

As Dan drew lines on the whiteboard representing tannins, phenolics, and more, he explained how he is not concerned with sugar, acidity, or pH anymore on when to harvest, but is more concerned with the tannins. The tannins get lower as the growing season goes on, and at the same time, the phenolics are going up. The best time to harvest and make the best wine is when the two lines meet. 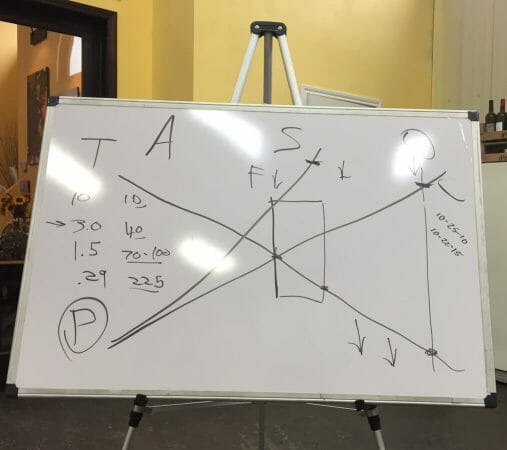 One analogy Dan used, which I had never thought of, was that grapes are like every species. Mom (the grape vine) has to feed her babies (the grapes) before they go off to the cold cruel world (harvesting). The more the grapes are fed, the better quality they will be when harvested.

While Dan was explaining his winemaking philosophies, including there is really no such thing as terroir, I was trying to contain as much knowledge as he was presenting. Even if I had recorded the presentation and written it all here, I certainly cannot do justice to Dan’s way of educating. I will be honest, at one point I was thinking, this is Taste With The Winemaker, but I had yet to taste any wine. That moment soon came though in a big way!

Dan started describing the wines we would taste and I soon realized this was a Super Flight! Fortunately for me, the wines had been used before for flights, and there was just enough left for us to use. The first comparison was between Inwood Estates 2015 Chardonnay and 2014 Domaine Gérard Thomas & Filles Les Chenevottes Chassagne-Montrachet 1er Cru. Surprisingly the Inwood Estates Chardonnay from the grapes of Inwood Road Vineyard in Dallas held its own to the French wine. Who said Texas can’t make Chardonnay?

The second flight was the Inwood Estates 2011 Magnus (52% Tempranillo, 48% Cabernet Sauvignon – $225 bottle) compared to the 2006 Vega Sicilia Tinto Valbuena 5.° (80% Tempranillo, 20% Merlot and Malbec – $200 bottle). Now we were into some serious comparison and I preferred the Texas blend to the Spanish wine. Dan said that often when people are doing the Super Flight comparisons, they end up walking out buying the expensive Inwood Estates wines, so I was not an exception to the preference.

A draught affected harvest in 2011. Dan sacrificed 91% of his potential crop to allow only .29 tons of grapes per acre. There was less wine produced, but the level of concentration and phenolic development made for very high quality wines.

The third and final flight was the Inwood Estates 2011 Colos (100% Tempranillo – $225 bottle) compared to the Numanthia Termanthia Toro 2011 (Tempranillo – $245 bottle) and from vines more than 120 years old. Again, Dan showed that terroir does not necessarily matter since the Texas Tempranillo was as good, if not better than the Spanish Tempranillo.

I then had the chance to taste a sample of the 2015 Mericana that will most likely be released next spring. This is 100% Cabernet Sauvignon. Dan explained that this was from a Cabernet clone from France that has been proving to be a wonderful grape. He said even Napa Valley growers are pulling up their current Cabernet vines and planting this one instead.

Taste With The Winemaker was very educational and I learned a lot about Dan’s winemaking including other things. He may have a different way of doing things, but I do not think anybody can question the excellent quality of his wines.

I would highly recommend taking the time to reserve a Taste With The Winemaker and take advantage of the education you will receive. You most likely will not get to taste Super Flight wines, but the Super Flight comparison is incredible, and to get the best of both tastings, I would also recommend reserving a Super Flight tasting too. The price may seem high, but when you consider you are tasting bottles of wine greater than $200, it becomes more understandable.

Reservations and more information about these two tastings can be found on the Inwood Estates Vineyards website.