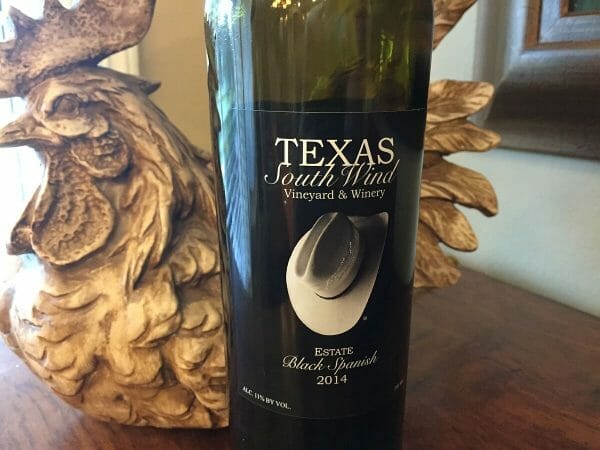 Black Spanish, Lenoir, or Jacquez, whatever the name used, is an American hybrid grape commonly grown in the southeast and central regions of Texas. The primary reason grown is that the grape is resistant to Pierce’s Disease, which is a deadly disease for grape vines. There have been many names of the grape over the years, which go back over 150 years: Jaquez, Jacques, Jack, El Paso, and more. Black Spanish was introduced into Southern France and the Madeira islands because it was found to be Phylloxera-resistant and the vines were grafted onto French grape vines.

In Texas, Black Spanish has been used primarily for port-style wines and as a blending grape, but there are wineries making single variety dry wines from the grape. Personally, I am not that fond of the dry wines.

We often volunteer at an Old Town Spring wine festival and earlier this year when we were volunteering, I was approached by Regina Staggs, co-owner and winemaker of Texas SouthWind Vineyard & Winery. I volunteered for them at a wine festival before and Regina wanted me to try two new wines. One of the wines was their new Black Spanish wine from their estate vineyard, and I honestly told her I was not crazy about Black Spanish. I did taste it though while she was gazing at me, and when done, I told her, “This isn’t Black Spanish.” A big smile came across her face and she affirmed it definitely was. Again, I said, okay, but it’s not 100% Black Spanish, and again she affirmed it was. That was the last I could get out of her as to what she had done, although she did say she worked hard on it. That was enough to convince me and I bought a bottle of the wine at the festival for $25.

I now needed to share this new find and the perfect place to share it was with our good friends Bill and Gail Day of Buena Suerte Vineyards. Bill has said before, and I agreed, that “Black Spanish was made for Paul Bonarrigo (of Messina Hof Winery & Resort) to make port.” We got together with the Days one evening and I brought the bottle with us. 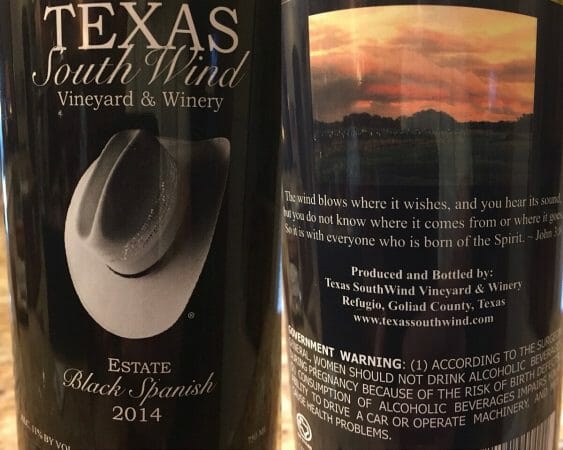 Before we opened other wines, I brought out the bottle and said we needed to try this one first. They were excited at first until they saw it was Black Spanish, but they are troopers and we all tasted it. I then started writing down comments made by people. These are some of them:

I was unable to get a technical sheet from Regina, but I believe she said there was 1% RS (residual sugar) in the wine.

It was time to do some pairing with food and one of the foods we enjoyed the wine with was Gouda cheese. Other foods the Texas SouthWind Black Spanish should pair well with is salmon, steak, hamburgers, or pizza.

One last comment made after the wine had been opened for a while was, “I’m getting a peppery finish.”

If you are one of the Texas wine lovers who may not care for Black Spanish wines, then I would recommend you try the Texas SouthWind Vineyard & Winery’s 2014 Estate Black Spanish.