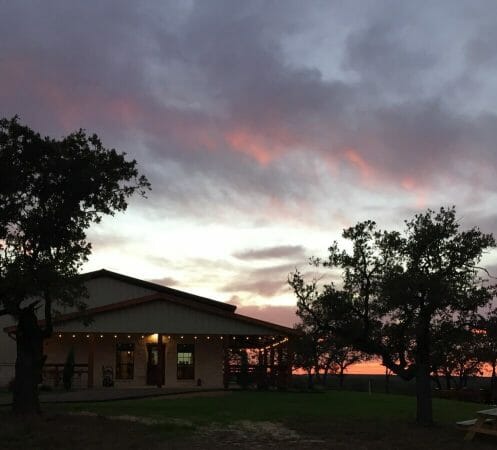 I had the extreme pleasure of being able to have a sneak preview of the newest winery in north Texas, even if it was just one day early. I met James Hanger a year or so ago when we were harvesting buddies at Blue Ostrich Winery in Saint Jo. We had a great conversation that morning with just the grapevines between us as we discussed wineries, grapes, wines, and his dreams to have his own vineyard and start his own winery. We have run into each other a few more times since then, usually participating in another harvest at Blue Ostrich. In the meantime, his dreams of starting his own winery have come true! His winery, OG Cellars which is named after his darling two year old daughter, Olivia Grace, had the Grand Opening November 19th.

OG Cellars is located between Sunset and Chico. Where is that, you ask? Due south of Bowie. North of Bridgeport. North Texas. North of I-20. An area of Texas that screams you were in the Hill Country if you didn’t know better.

On my way to pick up my son at Midwestern State University in Wichita Falls, I was able to swing by OG Cellars and see for myself what the pictures I have seen on Facebook have been teasing. I found the location easily even if my GPS did send me in a wide circle. The entrance gate was gorgeous and very inviting. I went through and made my way up a winding crushed rock driveway to the top of the hill where it opened up to reveal a beautiful building with a wrap-around porch and a view across an open lawn. 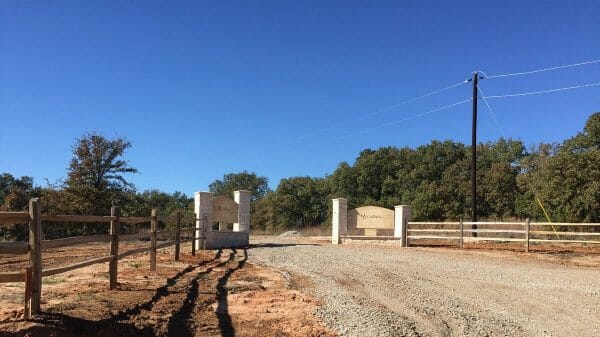 James came out as I exited my car and welcomed me to OG Cellars. He immediately began pointing out where his vineyards will soon be planted in a lower field. He said it will be 2.7 acres of Syrah and Viognier with 9 rows of Grenache and Mourvèdre in order to make a true GSM vineyard.

James invited me inside and on our way, he pointed out the lawn where he will set up a Bocce ball court, the separate patio with seating and fire pits, and beautiful Adirondack chairs on the wrap around porch. The front door had the OG Cellars logo in the etched glass and was especially handsome. As we stepped inside, the first thing I noticed was the delightfully rustic tasting bar with a beautiful young woman working behind it putting on the finishing touches. James introduced her as his wife Sammi. I instantly adored Sammi as she is as engaging as she is sweet and lovely. 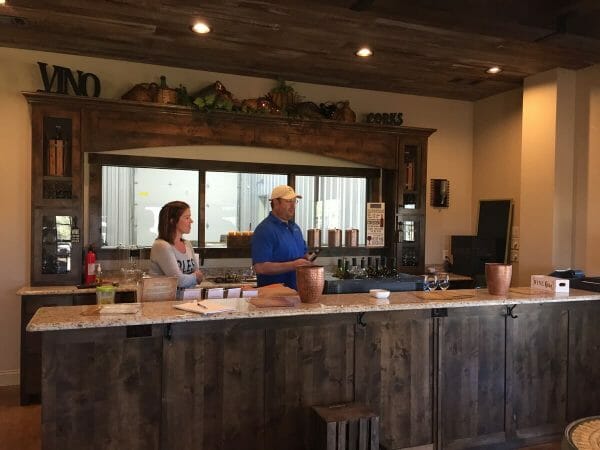 James set us all up with glasses at this point, and I was anxious to taste his wines that he obviously had put so much time and effort into making by traveling back and forth to the High Plains where his wines were housed. James began our tasting with Bianca Dolce 2015, a semi-sweet white made with 50/50 Orange Muscat and Muscat Canelli from the Farmhouse Vineyards in Meadow in the High Plains. While this white was made with a couple of Muscats which tend to be on the floral sweet side, this wine was not overly flowery, but had lovely honey and melon tones. As good as it was on this chilly day, I would love to enjoy it in the spring when the days are warmer and it can be enjoyed outside on their patio in the sunshine. As James poured, he explained that during slower times they will pour using the Coravin system that replaces the wine removed from the bottle with an inert gas so that no oxygen is introduced into the bottle at all. This will keep the wine from becoming oxidized and therefore fresher longer. An excellent method to preserve wines!

The next white he poured was a 2015 Albariño from Bingham Family Vineyards in Meadow. This wine was aged in stainless steel for six months at which time it was moved to neutral oak barrels. The stainless allows it to be crisp while the oak allows it to smooth out. This wine would be fantastic with any creamy dish or anything else for that matter! Be sure and have James and Sammi tell you the story as to why they wanted to provide this wine from this grape. It is a fabulous story.

During normal times, tastings will be done standing at the tasting bar or seated at a wine barrel table, and the wines have corked closures. There are two tasting fees, one for four wines and a higher fee for eight wines. They offer saltine oyster crackers to cleanse your palate between tastings and other foods are not currently offered. The gift shop will have wine glasses with the winery logo, t-shirts, wine stoppers and pourers, logoed corkscrews, and a wine aerator that was very interesting to witness. The OG Club wine club is offered with a limited membership, so I recommend getting involved sooner rather than later.

The next white wine was a 2015 Viognier again from Bingham Family Vineyards. This wine was barrel fermented in French oak and aged in five to six year old neutral oak barrels. Admittedly, Viognier is not a white that I would order on purpose, but James did such a great job with this vintage that I wouldn’t mind drinking it if it was being shared. 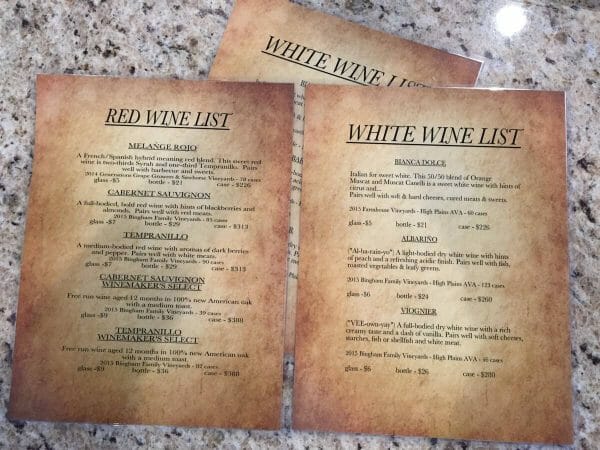 Finally we moved into the realm of reds. The first one was a 2015 Tempranillo also from Bingham Family Vineyards. I buried my nose in my glass and I found myself inhaling heaven. It was about this time that the door opened and a lovely lady walked inside who James introduced as his mother Linda. After greeting Linda, she and James needed to exchange opening information. I was finally able to remove my nose from deep inside my glass so I could take my first sip. I then took another sip. My eyes rolled around in the back of my head! James laughed. He explained this wine was barrel fermented and aged in 60% new American oak. This Tempranillo was smoky! Just like I like them.

As much as I wanted to stay with this Tempranillo, it was time to move on to the next one. The 2015 Tempranillo Reserve Winemaker’s Select was from the same harvest as the Tempranillo, but was made from the “Free Run” juice. This version tended to be much fruitier than its counterpart.

The final varietal was 2015 Cabernet Sauvignon again from Bingham Family Vineyards. James has certainly done his homework on knowing exactly what to do with each varietal. I am a Cab Sauv fan. I like all of the nuances Cab Sauvs deliver. This Cab Sauv employs every one of them: medium tannins, cassis, tobacco, dark cherries, and the creamy vanilla notes from the barrels. The door opened again and a rugged gentleman came in the room. It turned out to be James’ dad, Steve. This winery definitely runs on the love of family.

It was time for the final dry red wine. It was the 2015 Cabernet Sauvignon Winemaker’s Select and like the Select Tempranillo, it was made from the “Free Run” juice. I would love to time travel and taste this wine in five years and then again in eight to 10 years for sure. I think this wine has plenty of structure to hold up to cellaring for several years.

The final wine offered was 2014 Melange Rojo, a 66% Syrah and 33% Tempranillo blend. This semi-sweet combination would pair very well with any spicy dish be it Tex-Mex or Thai. I am mostly a big red wine drinker, but every now and then I want an off-dry/semi-sweet red that I can just open up, pour in my glass, and enjoy while sitting on my couch in front of a fire with no pairing stress. This wine definitely fits that bill! So much so, that I had a follow up taste while we took a quick tour of the building.

We left Sammi happily sorting through new t-shirts and James took me into the barrel room. We found his mom, Linda, busy personally numbering the bottles. He showed me all the barrels and the cold stabilization room. Then he took me outside to the covered crush pad and showed me the press and where future equipment would live. The north breeze was quite brisk out here and he pointed things out fairly quickly so we could make our way back inside. 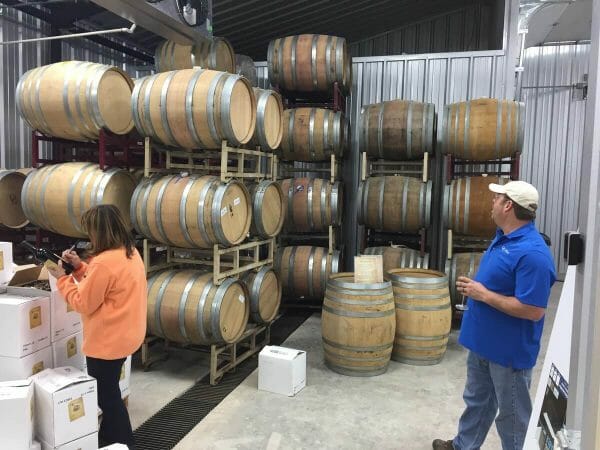 They had many finishing touches to complete before the big Grand Opening the next day and I needed to get on up the road to pick up my son. I made my purchase of Tempranillo and the Melange Rojo and left them to their chores. James and Sammi realize their winery is unique and will be a destination to spend some quality family time. So in addition to the Bocce Ball court, they are also making horseshoe pits, full size Jenga, Yardzee, ringtoss, and bean bag toss. I am anxious to add this precious winery to my list of wineries to routinely visit in north Texas, and I highly recommend you do the same!