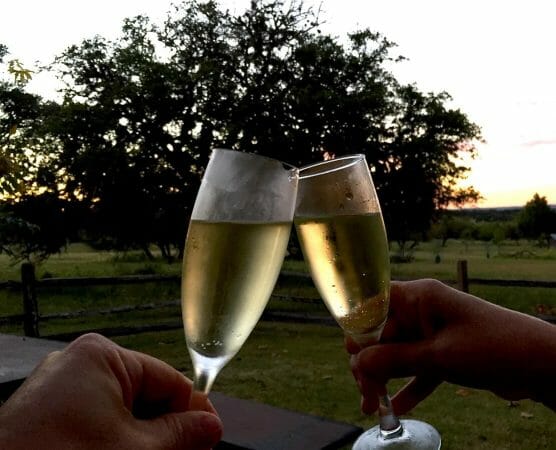 Be sure you don’t miss Part 1 of this story.

Day three of our recent anniversary road trip to the Texas Wine Country had us heading south down FM 1376 toward Sisterdale. Along the way, we passed the little town of Luckenbach and even well before noon, there were motorcycles gathering near the Post Office and Dance Hall. Willie made this town famous and there is always traffic around this area, so we had to keep a keen eye out for motorcyclists and tourists this day. The road is twisty and very scenic, but also somewhat narrow with no shoulders. A great drive, but not for the faint of heart or the easily distracted. 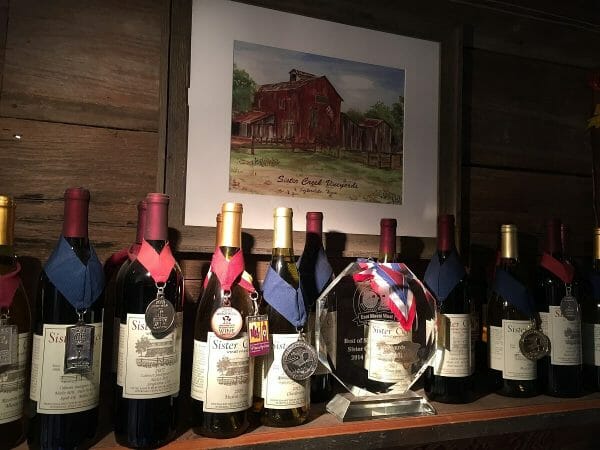 We arrive in Sisterdale (pop. 25) at Sister Creek Vineyards. There isn’t much along this stretch of road other than the winery (in operation since 1988), a little store, a dance hall (apparently requisite in all these little Hill Country towns), and a candle store. The winery is about the biggest operation and right along the roadside. You step inside a historic cotton gin (circa 1885) and the tasting room appears to be the converted tack room or something. Compact but very quaint. We arrived on wine club pick up day, so while we were waiting, we took the self-guided tour of the operations in back. A short tour but it had some good information and we got to see some of the inside workings of a winery. Back in the tasting room, we split a tasting across the board and sampled a mix of whites and reds. We came home with a bottle of Chardonnay (made Burgundy Meursault style, not California), Muscat Canelli Reserve, and the Cab 5 Blend (Cabernet Sauvignon/Syrah/Merlot/Petit Verdot/Malbec). We don’t buy or drink many Chardonnays, but we did like this one.

Said goodbye to the folks at Sister Creek and we headed west on RR 473 to the cute little town of Comfort, Texas. We drove around a short while until we found High Street, which is where all the history is centered around. We poked our heads into the Branch on High tasting room and although it smelled divine in there from the food that was being prepared, we asked for directions to their winery just outside town. We skirted around the Hermann Sons’ properties and found our way to Bending Branch Winery. We tasted a couple of whites and a few reds and found ourselves leaving with a bottle of Thinkers Blanc (Orange Muscat/Muscat Diamond/Viognier) and a bottle of Zentner Vineyards Souzão (no Tannat). 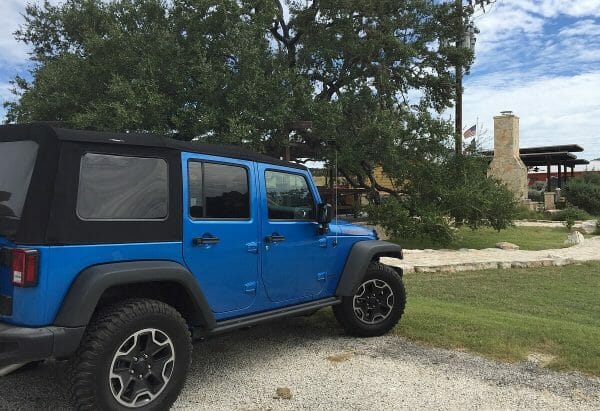 Just around the bend from Bending Branch is Singing Water Vineyards nestled in a nice little valley along a small creek that apparently sings to some folks. Here they have a separate room to honor the U.S. Military, a very nice lounge with honors and tributes covering the walls. Tastings were being done at the front and rear tasting bars, so we just plopped ourselves down in the stools up front and sampled their tasting menu. We left Singing Waters with a bottle each of Pinot Grigio and Vintner’s Reserve Cabernet Sauvignon/Merlot blend and a bottle of their Freedom red blend (Syrah/Cab Sav/Merlot/Montepulciano) where a portion of the proceeds goes to the Fisher House and the USO.

We were headed west toward Kerrville next and decided to take Hwy 27 instead of I-10. When we arrived in Kerrville, we headed north on Hwy 16. Just north of town is Kerrville Hills Winery that sits on a hilltop just above the highway. They were getting set up for some live afternoon entertainment and we found our way to the end of the tasting bar to sample some wine. The wine menu here featured a number of reds and whites with what seemed to be an unusually heavy number of Cabernet Sauvignon wines. We did all reds at Kerrville Hills, starting with a 2006 and worked our way forward to several 2009s (along with a Merlot and Petite Sirah). We came home with a bottle of the 2006 American Cab along with a bottle of the 2009 Gold Cab. There was a little sticker on the top of our tasting menu that said they had just began sampling their new 2015 Montepulciano, so how could we resist as this was becoming another new favorite grape of ours. We really enjoyed this wine even though we will be letting “Pooch” sit in the cellar to age a bit. Oh, and these were Texas-sourced grapes whereas most of their other red grapes came from out of state.

We head back north on Hwy 16 a few miles to Santamaria Cellars, a small “mom and pop” operation. I had a little confusion on the name as it is listed as two words on their website (and more importantly, on their labels) but Santamaria is one word on the tasting sheet and is their last name. Regardless of how it is listed, the wines were wonderful. We spent our time on the red side of the menu, starting off with a Pinot Noir that was better than any we tasted last year in Willamette Valley (AKA Pinot Noir country). I think this is only the second bottle of Pinot Noir I have ever purchased. We also came home with a bottle of the 2012 Cabernet Sauvignon and the 2014 Malbec, again maybe only the second bottle of Malbec I have ever purchased (sure, had it in blends, but never found a single varietal I really enjoyed).

We decide to make one more stop before arriving back at our accommodations to get ready for our anniversary dinner. We are staying literally a stone’s throw from Rancho Ponte Vineyard and we have a little time, so let’s stop in here. Glad we did; they have some new wines since we last visited several years ago. Of course, we ran the reds again in our tasting here, and we came across a surprise grape of the day (if I haven’t already used that for day three). And actually, we found two. The first we had heard of – Primitivo – so not really a surprise grape as most of you know it as Zinfandel. And we like our Zins and found this one to be wonderfully rich. So let’s skip to number two – Refosco. Wow, almost made us forget the Primitivo. I kind of/sort of compare this wine to the nice Chianti Classicos I have had over the years. The last wine we settled on at Rancho Ponte was the Ranch Dog Red. We liked it, but for the life of me, I cannot remember if our host said what the grapes were and it is not listed on the tasting sheet or website.

Dinner was at Navajo Grill and that is all I am going to say about that. 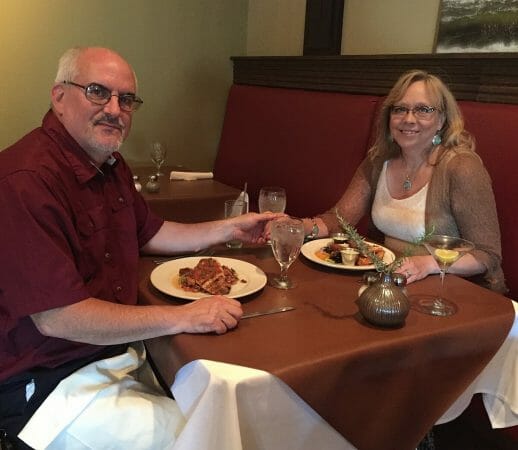 Our last full day in the Texas Wine Country and we start our day by sleeping in a little. 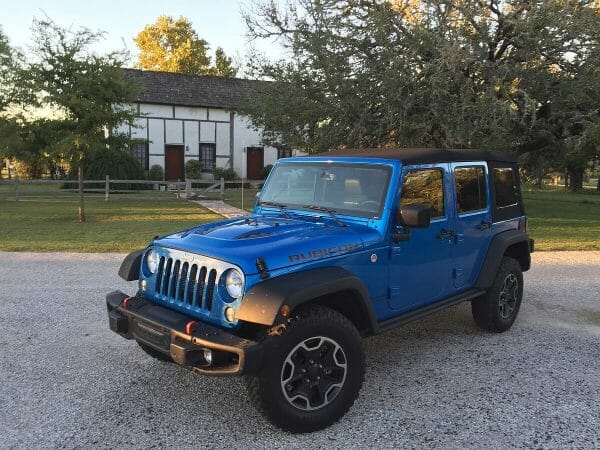 It is Sunday so most wineries won’t open until noon, so we decide to get an early lunch in town. Altdorf Biergarten in Fredericksburg opens at 11 and has some nice spots in the shade on the patio. We get our fill from some good German-inspired sandwiches and head across the street to the Pontotoc Vineyard tasting room. They are right next to an old inn, which is right next to Hondo’s on Main. The Money family purchased the tasting room property and one of the buildings is the oldest or second oldest-standing house in Fredericksburg. And it has a real cellar. Carl Money was in the tasting room along with his wife Frances and their four children. OK, three, but number four is soon on the way so they were included. Also visiting the tasting room was John Rivenburgh, and he was helping Carl carry in some inventory along with some new 2015 Pontotoc wines. As we enjoyed our tasting with Frances, Carl and John were sampling the new batch of 2015 reds. And when our tasting was finished, Carl offered us samples of the wines he had just first tasted out of the bottle. How cool was this, tasting current and new wines with the owner and his family along with John Rivenburgh. We got a bottle each of 2014 San Fernando Academy (an eight-grape red blend) and a 2014 Estate Tempranillo (a one-grape blend). The 2015 wines we were privileged to sample were both of the wines above and we cannot wait to come back to get a bottle of each of these. And we did not leave before getting two growlers of Frances’ Sangria made from Tempranillo (and other good stuff). 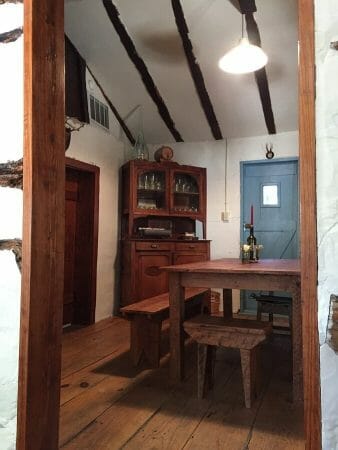 Before we head down Main Street and fight the Oktoberfest crowds for parking, we decide to poke our heads into Fredericksburg Winery. It has been a few years since we visited here last and glad to see it is still run by the same family, and many of them even work on Sunday. We tasted mostly dry reds here (Cuvee I, II, and III) and came away with a bottle of Cuvee II (2014 Montepulciano) along with bottles of Snow-on-the-Mountain (Orange Muscat), Zelebration (Riesling), and for the holidays, a bottle of Main Street Christmas (Gluhwein) 2016. We take the side roads and find a parking space behind the building that houses Narrow Path Winery tasting room. Here we enjoy a Rosé Sec and several nice red wines. We purchase a bottle of the Rosé Sec along with – Ta Da! – my third bottle ever of Malbec. We also picked up a bottle of the Select Red Blend (Syrah/Merlot). 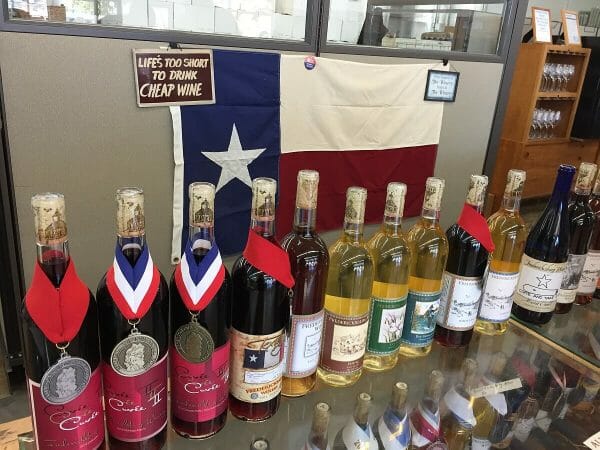 OK, really don’t want to walk to the next winery, so we hop back in the Jeep and circle the block around to Andreucci Wines more than a couple of times. Arghh, we would have been here already if we would have just walked. We finally find a parking space on an empty street and under a big shade tree. Hmm, will the Jeep still be here when we return? Why isn’t anyone else parking here? This is Fredericksburg, so there is no way those shady private tow companies are gonna find my vehicle, so we head off to our last stop of the trip, Andreucci Wines. We step inside and are immediately greeted by an older gentleman who reminds you of your dad. I learn that this is none other than the owner himself, Bill Sutherland, and we begin enjoying wine and sharing stories about life. He tells us about a cooking show he did when he and his wife lived in Italy and I showed him some of my photography.

The chalkboard sign out front said “Free glass of Prosecco on Sundays” and that was drawing a lot of folks inside as the temperatures were climbing. Over the past couple of years, we had been seeing a sign on 290 east of town saying “Coming soon.” Bill explained to us he had some unforeseen delays, but they were back on track and things were moving right along. He poured us a lovely white called Donna Alma (named in honor of his mother I believe he said), a Pinot Grigio that is going to go very well with some fish or something similar. We visited a few reds before arriving at Costavecchia, a Chianti. Oh my, this was good. The next wine we fell in love with here at Andreucci was the Regale IGT Super Tuscan (Sangiovese Brunello/Cab Franc/Merlot). This was a wonderful visit and we did not want it to end, but Bill could not figure out how to put the Cowboys game on his TV monitors that were displaying gorgeous photos from his village in Italy, so we said our goodbyes (after our glass of wonderful Prosecco).

This wraps up an ambitious wine tasting/anniversary celebration trip to Texas Wine Country. Five days, 800 miles, 20 wineries, more than 110 wines sampled, five cases of wine brought home, and wonderful memories of the new friends we made along the way. Salud!