Join us in welcoming Lost Draw Cellars to Hoffman Haus as they introduce us to their wines grown by Andy Timmons, a fourth generation Texas High Plains farmer. Lost Draw Vineyards outside Brownfield, Texas, in Terry County, grows some of the best grapes in the state and supplies a number of Hill Country Wineries with quality fruit. In 2013, Andy Timmons, Andrew Sides, and Troy Ottmers joined forces to create Lost Draw Cellars in Fredericksburg, with the goal to highlight that wonderful Texas High Plains fruit by producing their own range of quality Texas wines.

The Otto’s culinary team of Atticus Ahrendt and James Monzon have created a menu inspired by festive Oktoberfest favorites. This is not just an opportunity to meet the winemakers and grape growers, but also to enjoy an evening amongst friends. This is how great Texas wine (and food) should be enjoyed!

It took a bit of sleuthing to figure out where the dinner was being held on the rather extensive Hoffman Haus grounds. After parking, I wandered among the numerous buildings on the property, finally walking through a lovely arbor into an extensive courtyard where folks were gathering. On the side porch of the main building was a table set with wine in ice buckets, and trays with delicious soft pretzels and cheese dip made with the Vermentino wine being served for the reception. I stepped onto the porch and greeted co-owners and friends Andrew Sides and Troy Ottmers. Although Andy Timmons was unable to attend the dinner, these other principals certainly represented Lost Draw Cellars (LDC) in good form. 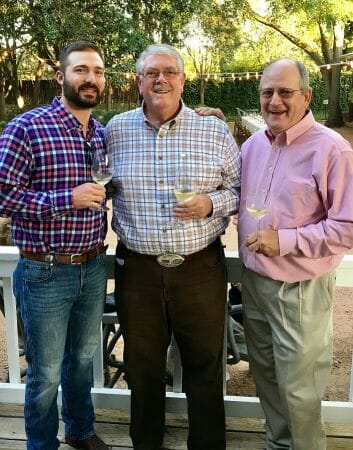 With wine glass, pretzel, and cheese dip in hand, I then ventured into the beautiful courtyard to mingle with other guests. Soon, we were all asked to take a seat at the long, decorated table. There were soft lights overhead, and lighting from the buildings on the south and west sides of the courtyard further enhanced the mood. I was most fortunate to be seated between Andrew Sides and Troy Ottmers. Soon the first dinner wine was poured and everyone was ready for what promised to be a memorable evening of Texas wine and food. 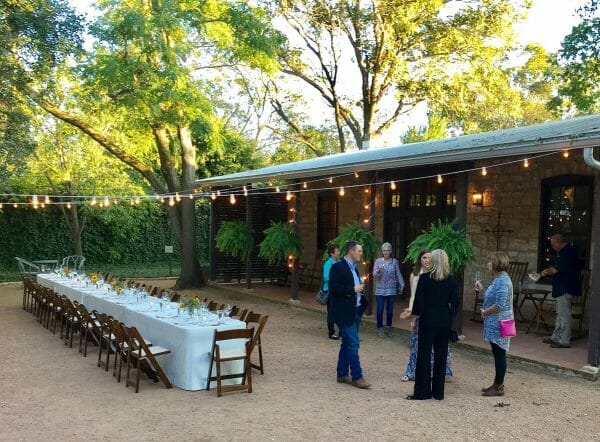 Vermentino is an Italian white wine grape that more and more often is showing up in wines at Texas wineries and tasting rooms. This grape, like many native to Italy, prospers in hot, arid, sunny areas of Texas. Under the name Rolle, this grape also grows well in the Mediterranean climate of southern France. Vermentino has bright acidity, making it very refreshing and food friendly, with citrus and wet mineral aromas and flavors. It is a relatively easy variety to grow as it naturally resists many vineyard pests and diseases. It is certainly drought tolerant, and tends to ripen conveniently in the middle of the harvest cycle.

This Lost Draw Vermentino was machine harvested from Lost Draw Vineyards outside Brownfield, and fermented cool in stainless steel tanks. It was not allowed to undergo secondary malolactic fermentation, thus preserving the natural minerality and mouthwatering acidity. The wine had aromas and flavors of green apple, lime fruit, and oyster shells. And, it was a well-matched companion with the warm, soft pretzel and spicy wine cheese.

The German word gemütlichkeit is used to describe a situation that is cozy and comfortable, and induces a cheerful mood, peace of mind, and a sense of belonging. That certainly described the atmosphere for this Lost Draw Cellars dinner enjoyed by 35-40 enthusiastic folks in the courtyard at Hoffman Haus. This inviting white blend of Grenache Blanc, Viognier, and Roussanne (maybe others, but I forget), was basically full of upfront fruit and essentially dry on the palate. The previous bottling of Gemutlichkeit was a bit more on the sweet side, and I much prefer this drier version.

This combination was quite satisfying as the thick, dark green soup was filled with vegetable and herb flavors, spiced by the toasted rye bread croutons. The wine fell right in step with the flavors in the soup, with the fruit aromas and flavors lifting the dish to an even more delicious level. This was a most pleasant and somewhat surprising pairing.

It must be said that risotto is one of my favorite dishes. When I see risotto on a menu, it is usually difficult to resist ordering it, regardless with what else comes with the risotto. Here was another wonderful pairing created by the teams at Otto’s, Hoffman Haus, and Lost Draw Cellars.

Cinsault (sin-SOH or san-SOH) is a common red grape in southern France, especially the Rhone Valley. Because Cinsault is heat and drought tolerant, it is also important in the southern French region of Languedoc-Roussillon and former French colonies of Algeria and Morocco. The grape produces richly colored red wines with a softer, less tannic character, and is often blended with other varieties, such as Grenache, Carignan (care-in-yawn), and Syrah to impart softness, spicy flavors, and fresh fruit aromas.

Cinsault has a long history in arid regions around the world. It is the key component in the most famous wine from Lebanon, Chateau Musar. In South Africa, Cinsault is often blended with Cabernet Sauvignon to generate softer, easier-drinking blends. Cinsault and Pinot Noir were the parents of the famous South African cross variety, Pinotage. Significant plantings of Cinsault exist in Australia, and in the U.S., the Bechtold vineyard in Lodi, CA, planted in 1885, still produces Cinsault grapes treasured by vignerons.

Cinsault is doing well in Texas. It is very popular for the production of rosé wines, and has become a favorite for lighter-bodied, easy-drinking reds. This lovely LDC Cinsault was redolent with the fruity perfume of ripe strawberries and red cherries. Somewhere in the flavor profile were raspberries, currants, and black cherries, with hints of sea salt brine and cocoa powder. This paired magnificently with the pork roulade, which was really chopped and seasoned pork wrapped in pork. There were several comments made by fellow diners that if bacon had been involved, it might represent the perfect dish. And then there was the risotto – well-seasoned, formed into large ovals, lightly breaded, and fried to a crispy, golden brown stage. Did I mention that I just love risotto?

Tempranillo is native to Spain and Portugal. It is famous for making the fine red wines of the Rioja and Ribera del Duero regions of Spain, and as one of the key grapes (called Tinta Roriz) in Port wines. The climate in these regions is hot and dry with a desert-like diurnal temperature shift of 30-40 degF between the nighttime low and daytime high. These Iberian regions sit at relatively high elevations, much like many Texas vineyard areas. So, when Tempranillo was brought to Texas, it shrugged off the difficult conditions and adapted to become a key grape in both the Hill Country and High Plains.

This Tempranillo is considered Lost Draw Cellars’ flagship wine, and is extremely popular in the tasting room and with wine club members. It has notes of leather, black currant, dark plum, cherry, and vanilla (from selective barrel aging). The balanced acidity and nicely integrated tannins provided a luxuriant mouthfeel and lingering aftertaste. The pairing with duck sausage was inspired. Rather than add curry to the sausage, the Otto’s team flavored a ketchup sauce with the spice and drizzled it across both sausage and fries. To state the case simply, this was yummy! 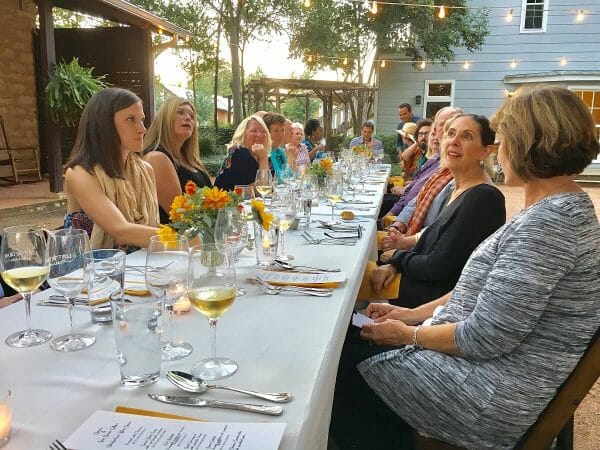 Now I am a bit biased regarding Mourvèdre (moor-ved), which I consider one of the top grapes available for making fine red wine in Texas. This variety has been a part of my cellar for many years, mostly in the form of bottlings from Bandol in the Provençal region of southeastern France. The variety is also known as Mataró or Monastrell, and is grown extensively in arid, warm weather regions around the Mediterranean Coasts of Spain and France, and in Australia and the U.S. (Texas!). Mourvèdre is used for many wine styles, ranging from rosés to lighter reds, and from dark, full-bodied reds to port-style wines.

This wonderful bottling of LDC Mourvèdre was strategically placed at the end of the wine pairings, as pretty much everyone in attendance pronounced this the highlight of the night. Mourvèdre produces small thick-skinned berries that are high in both color and flavor phenolics that can lead to dark, tannic wines with higher alcohol levels. Most of that was found in this brilliant dark red, except for the heavy tannins which were very much held in check. The wine was more fruit-driven with red berry fruit aromas and flavors. With time in the cellar, it may develop some wild game and earthy notes that tend to emerge as Mourvèdre wines age. So, stay tuned, as this soon-to-be-released Mourvèdre may become an early legendary offering from Lost Draw Cellars.

The Mourvèdre paired seamlessly with the thick, meaty stew full of vegetables, served over a savory bread pudding. The sautéed greens on the side were very tasty and matched flavoring intensity with the main part of the dish. Surprisingly, there were raisins (I think that’s what they were) that added just a touch of sweetness to the bread pudding, which, in turn, brightened the flavors in the goulash. There was certainly quite a buzz around the table as folks tucked into the dish and followed with sips of this lovely Mourvèdre.

There was no wine offered with this final dish, and that was probably the right choice after all the wines that had already been served. This dessert was not overly sweet and was thoughtfully presented. The cheese and pears were nestled into a light crisp, and the flavors were beautifully integrated. This represented a fine finish to a wonderful meal and very special evening in the Texas Hill Country.

Here is a final note on Otto’s German Bistro:

The current Otto’s culinary team of Atticus Ahrendt and James Monzon, have followed the lead of former founding chef, Adam Yoho, in crafting seasonally focused menus that highlight not only what you can find in Germany and Austria, but explores the Germanic cuisines of Alsace, Northern Italy, and especially, central Texas! Otto’s mission is to provide guests with a warm, friendly setting in which to enjoy great food and fine wines served by a team of dedicated, detail-oriented staff.

For more information about Otto’s, please contact Evelyn at 830-998-0190 or by email at evelyn@ottosfbg.com