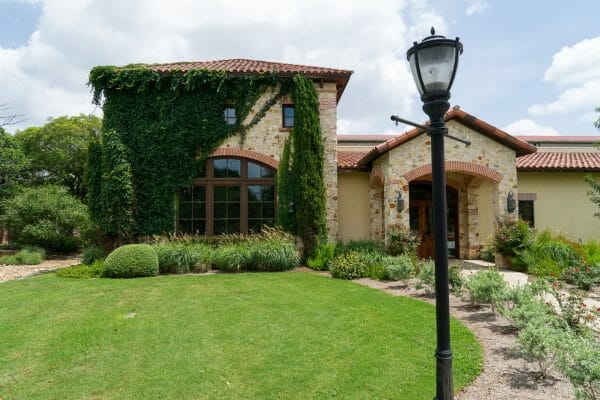 The tasting was complimentary and all opinions are our own.

Back in May, I had the pleasure of attending a “Taste of Texas” tasting put on by Texas Fine Wine in Houston. At the event, we tasted wines from Duchman Family Winery. I enjoyed the wines we tasted and was very familiar with their 2011 Aglianico that we enjoyed at home a few months back. I met Jeff Ogle, General Manager for Duchman, at the tasting and expressed how much I like that particular wine and vintage. I also mentioned to Jeff that they were on my short list of wineries to visit and we hoped to make it out there soon. Jeff stated that if we planned to be there on a weekend to call ahead and he offered to be my “insider” should I want to visit.

Fast forward to Independence Day weekend. We were doing our yearly tradition of visiting wineries for the holiday with good friends of ours and on Saturday I asked if they were interested in visiting Duchman Family Winery on Sunday. Of course the answer was “yes!” I gave Jeff a call, left a message, and he called back a little later. We set up an early afternoon time for the next day to visit.

We arrived about ten minutes before our appointed time at the beautiful location of the winery and were taken in by the vineyard and buildings on site. The vine covered brick building sits on meticulously landscaped grounds surrounded by mature oak trees. We were glad we had an appointment with Jeff as the tasting bar was full and even two deep in some places. I got Jeff’s attention and the timing was perfect as a group just left the bar. Jeff was giving a tasting to a couple next to us and he got us started on a tasting. He said he would start a tour in a few minutes and the other couple would join us. He also quietly said that he had a vertical Aglianico tasting set up for us at the end. That got my attention! We finished a flight of Duchman’s white wines—Trebbiano was my favorite—and started the reds when Jeff and the other couple were ready for our tour. 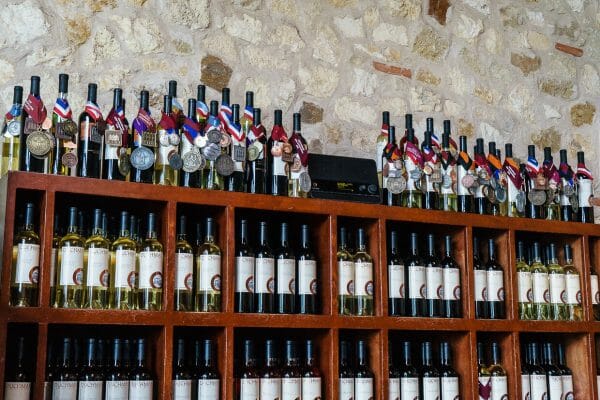 Jeff took us through the facility starting in the aging room. There were several dozen barrels and huge tanks that were filled with wine that would soon be bottled and on shelves for sale. From there, we ventured into a room with fermentation tanks and equipment for grape de-stemming and crushing. We hung around a storage room that was filled with bottled wine either doing a little bottle aging or getting ready for distribution. One thing we notice were small kegs. Jeff talked about their wine on tap program that they have going with some restaurants and stores. They even had three wines in the tasting room that could be purchased to take home in two different sized “wine growlers,” 500ml and 750ml. We left with 500mls of their Montepulciano. We ended the tour in their bottling room and were impressed by the efficient looking bottling line. 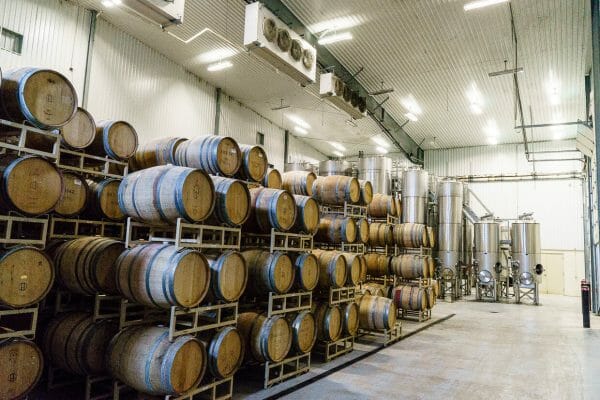 The other couple left and Jeff invited us to step up to another tasting bar outside the tasting room and began setting up a vertical tasting of their Aglianico. A “vertical” tasting is simply the same wine, by the same winery for a number of consecutive years. These tastings typically start at three years minimum. We were looking at a tasting of 2010 through 2013, a four year vertical, with two versions of the 2012. Aglianico is not an easy wine to make due to the strong tannins in young wines and high acidity in wines of this type, but made right, it can impress even the most particular red wine lover. It’s a “full-bodied” red that was originally found in southern Italy. If you’re a fan of spicy, earthy wines you’ll like wines from this grape. All vintages have grapes sourced in the Texas High Plains from the Oswald Vineyard and/or Reddy Vineyards. The 2010 was from both vineyards but every vintage starting with 2011 uses Oswald Vineyard grapes. There was also a second 2012 version that was an estate Hill Country Aglianico. 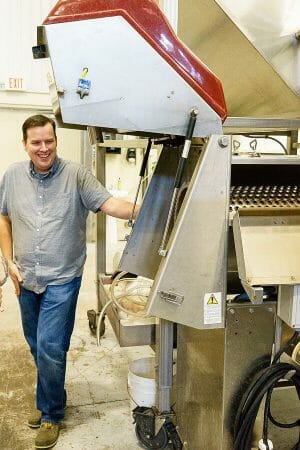 Note that I am in no way a sommelier or even consider myself to have good tasting skills. I simply taste and decide whether I like it or not. I can also give a few basic impressions. So here are the short notes that I took while enjoying the vertical tasting.

Again, these are the impressions of an amateur wine taster. Someone with a sophisticated palate could probably come up with different impressions and taste descriptions. I just know that I enjoyed all of them and would be happy to have any of them in my cellar. Thanks again to Jeff Ogle for the wonderful time. If you want to visit, try a weekday. If that’s not possible then be sure to try and get an appointment. This is good advice at most of the “popular” Texas tasting rooms.