We recently had a busy weekend starting Friday night and ending Sunday night. What we expected to be just a few winery visits turned out to be much more. It was a busy weekend, but in the end, it was a lot of fun and well worth it. 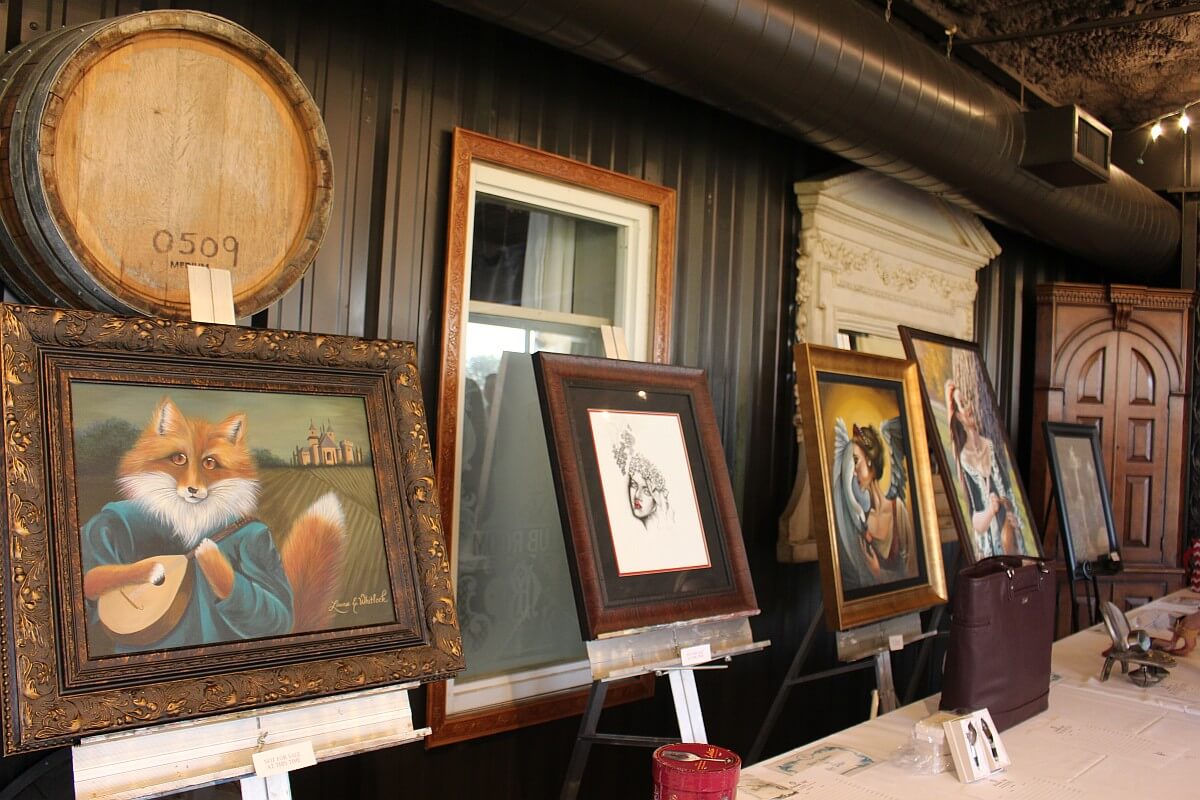 Spring Release Wine Dinner with the winning art on the left

Friday night started at Messina Hof Winery & Resort in Bryan for their Spring Wine Release Dinner. During the evening was a silent auction with art on display from the 2016 Texas Artist Wine Label Competition. The Fox & His Lute turned out to be the eventual winner and it will be used on a future wine label. The five course meal with the main course of crusted halibut was paired with new releases of Messina Hof wine and as usual, the meal and wine was fantastic.

The next day was the Messina Hof Wine & Roses Festival starting with a VIP Reception for Messina Hof VIPs while the public started attending the festival which gets bigger every year. After the VIP reception, VIPs were then able to visit the arts and craft booths, listen to music, grape stomp, and of course don’t forget more fabulous wine.

We then drove to Austin where we met up with a group of wine friends including a number of Texas Wine Lover writers for a fun evening. Enjoying wine is always better with friends and this was no exception.

Our plans for Sunday had changed from what we originally thought, which goes to show you cannot plan for everything when it comes to the wine industry. Compass Rose Cellars had put out a call for help with bottling during the weekend and we decided to help out Sunday morning. By 8 a.m., we had driven to Hye and met owner Mark Watson at Compass Rose in the winery. Along with Mark was winemaker Tony Offel getting the equipment set up ready for bottling. While Tony was getting that set up, Mark, Gloria, and I worked on labeling the 2014 Merlot which had been recently bottled. Gloria and I got in a rhythm and labeled a pallet of wine which would be enough for the following week’s wine club pickup party. 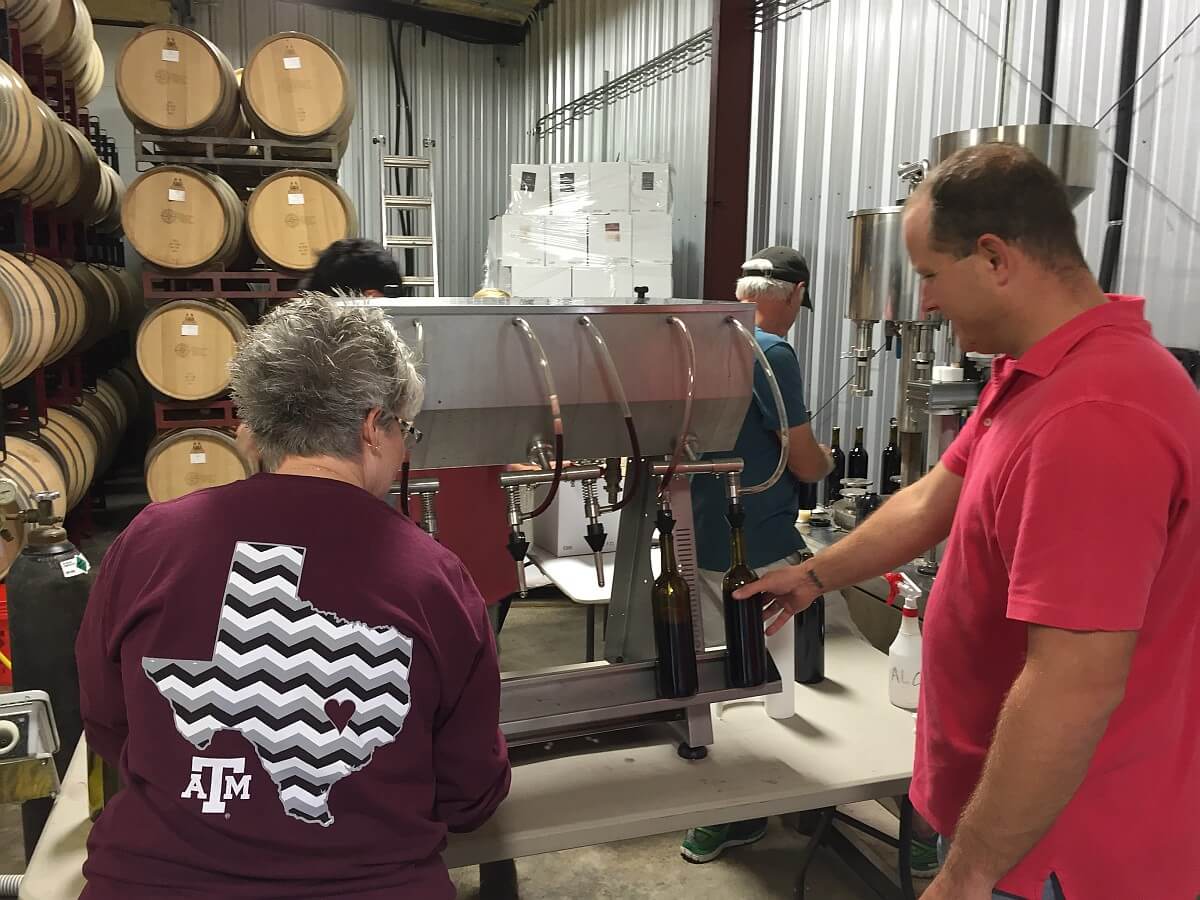 The bottling machine had been set up so we took our turn at the filling station while Mark handled the corker. Soon Charles Green, also with Compass Rose, came to relieve Mark and we worked until it was time for brunch. We have been hearing so much about Compass Rose’s Sunday brunch and were excited to try it. Everybody took a break and went up the hill to the tasting room to enjoy the brunch. Ben “Chilly” Huselton is the chef at Compass Rose, and his brunch was definitely as great as everybody has stated. We enjoyed items on the brunch that you do not always see on the same brunch buffet and if that wasn’t good enough, Chef would prepare an omelet to your request. It had been a busy but enjoyable morning at Compass Rose. 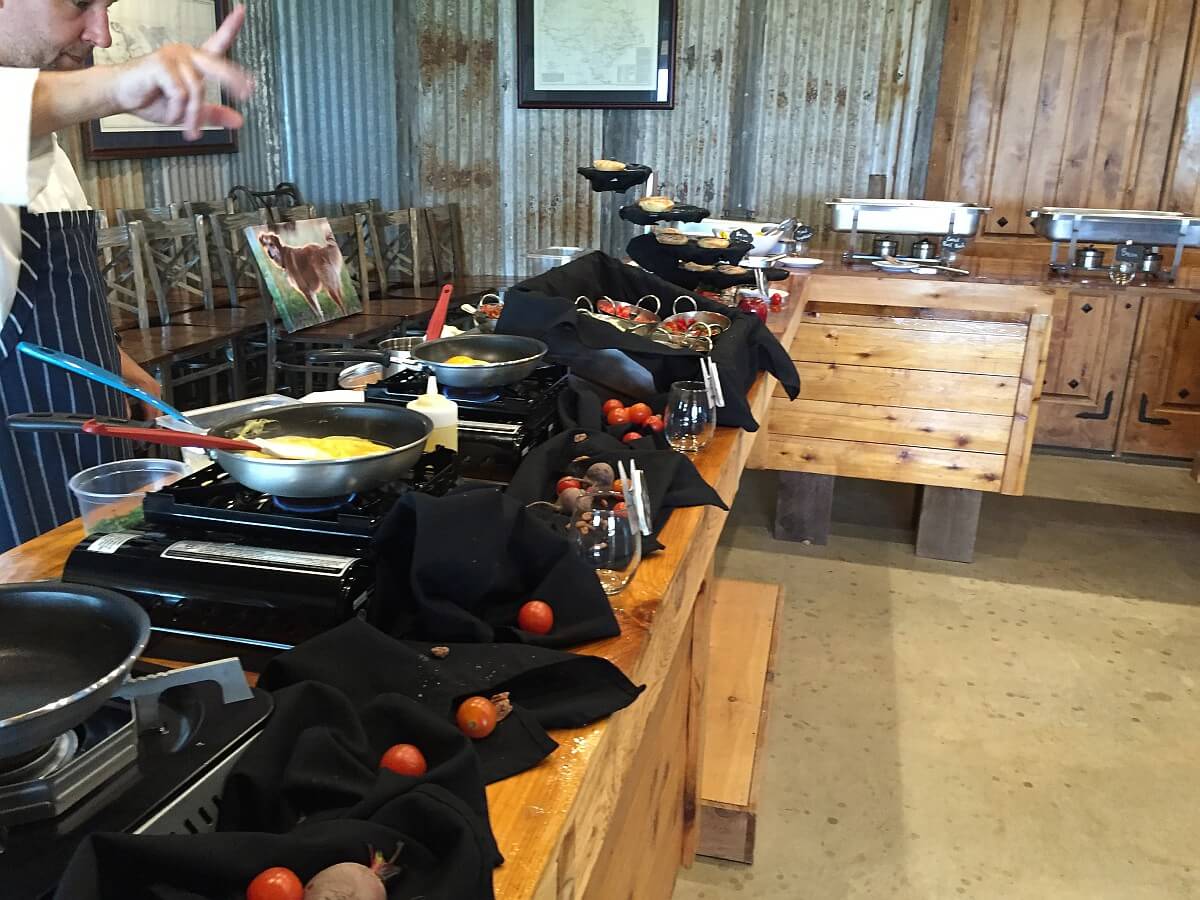 Next up was a trip across US 290 to the wine club pickup party at William Chris Vineyards. We met up with some friends from the previous night and took the pickup party wine tour to the different stations at the winery. With the number of wine club members William Chris hosts, they have a nice plan to spread people throughout the winery to avoid congestion. It was great seeing vineyard owner Linda Hesse again, one of the co-owners of Castaño Prado, presenting the wine which was made from the grapes from their vineyard. 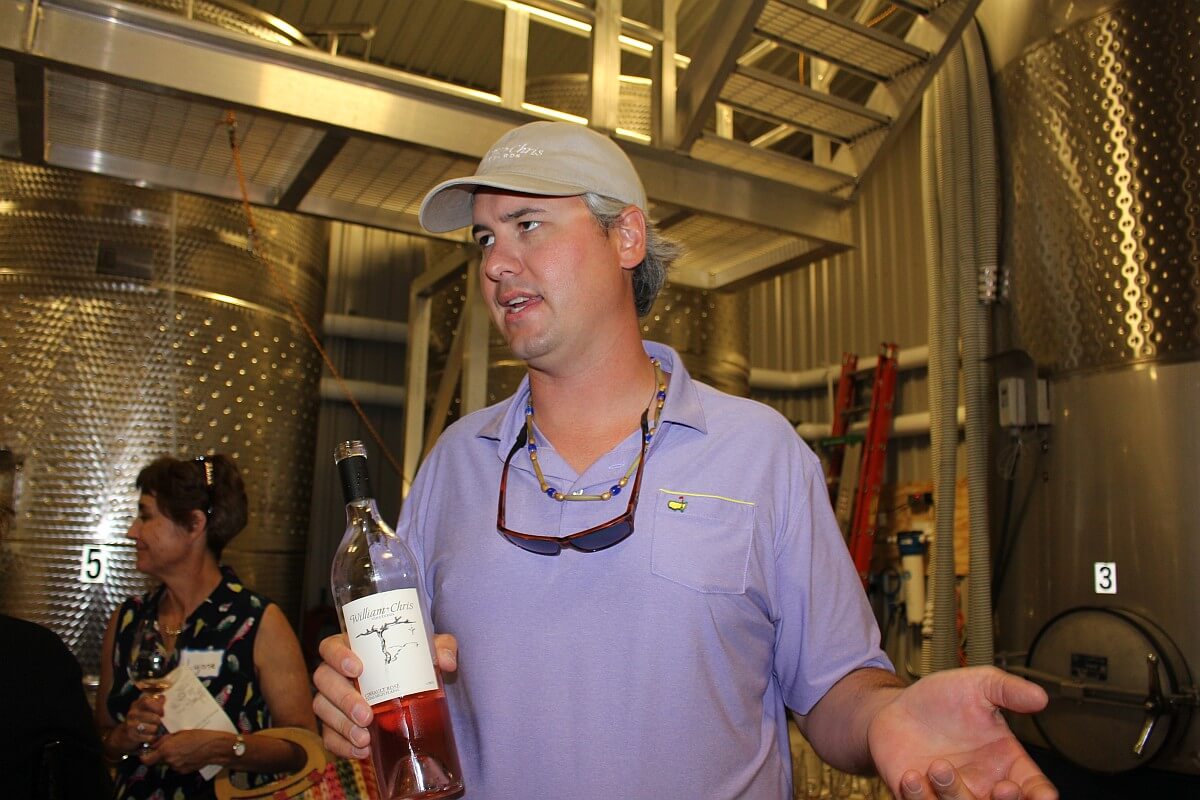 It was now time to head home but first a stop across the street again was needed at Hye Meadow Winery. Okay, now it was time to head home. Then as we got closer to Calais Winery, the idea to stop was discussed. I got on my phone to make an appointment via the website. Luckily it was close to the hour so we did not have long to wait for the next available spot. As we walked into the winery, we received a surprise with another friend, Sheri Pattillo, working behind the tasting bar. She said she had recently started helping Ben Calais and handled our tasting. We of course had to have Ben’s artisan bread which we did not have the chance to sample the last time we had visited. Unfortunately, with Calais’s popularity, five of the nine wines were sold out. That might also explain the high prices on the remaining four wines. But there are a number of barrels with cool glass bungs that Ben said he found in France and just had to have. Good choice! 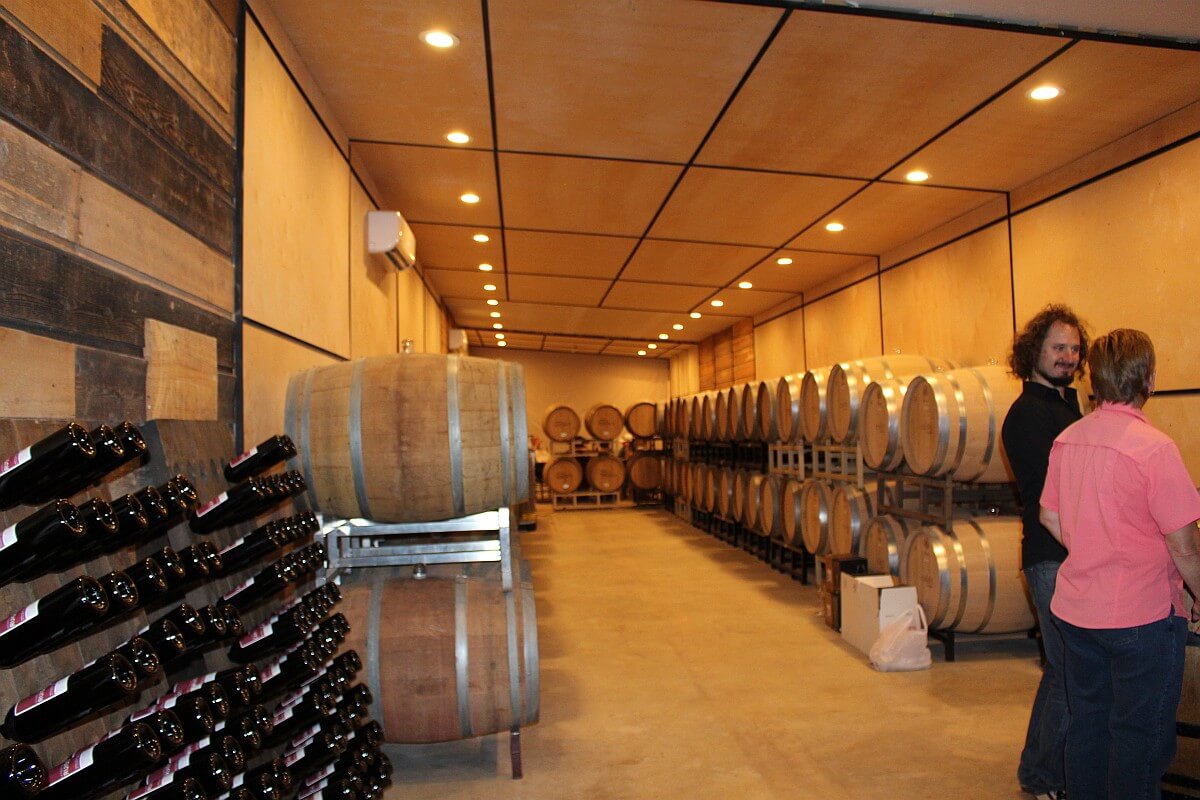 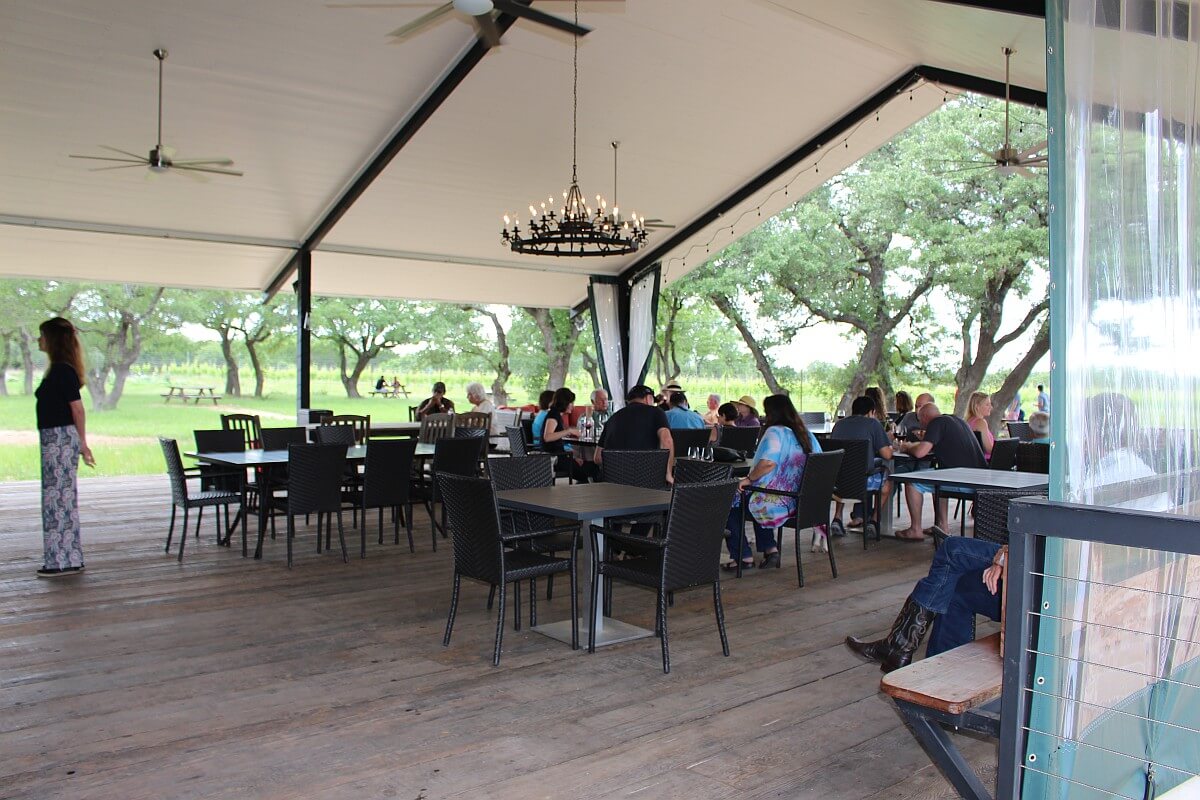 Going through Johnson City, I guess we did not have enough as we viewed the soon to be open 290 Vinery, so we stopped at Taste Wine+Art. Owners Warren Vilmair and Susan Kirchman are also the owners of 290 Vinery and Warren was pouring wines in the store for a nice couple. Even though we had meant to visit Texas Wine+Art before, this was our first visit and experience. There is a large selection of art available for sale, but our interest was drawn toward the tasting bar. Warren presented a nice tasting of wines from around the world and we are now even more eager to visit 290 Vinery when it opens. 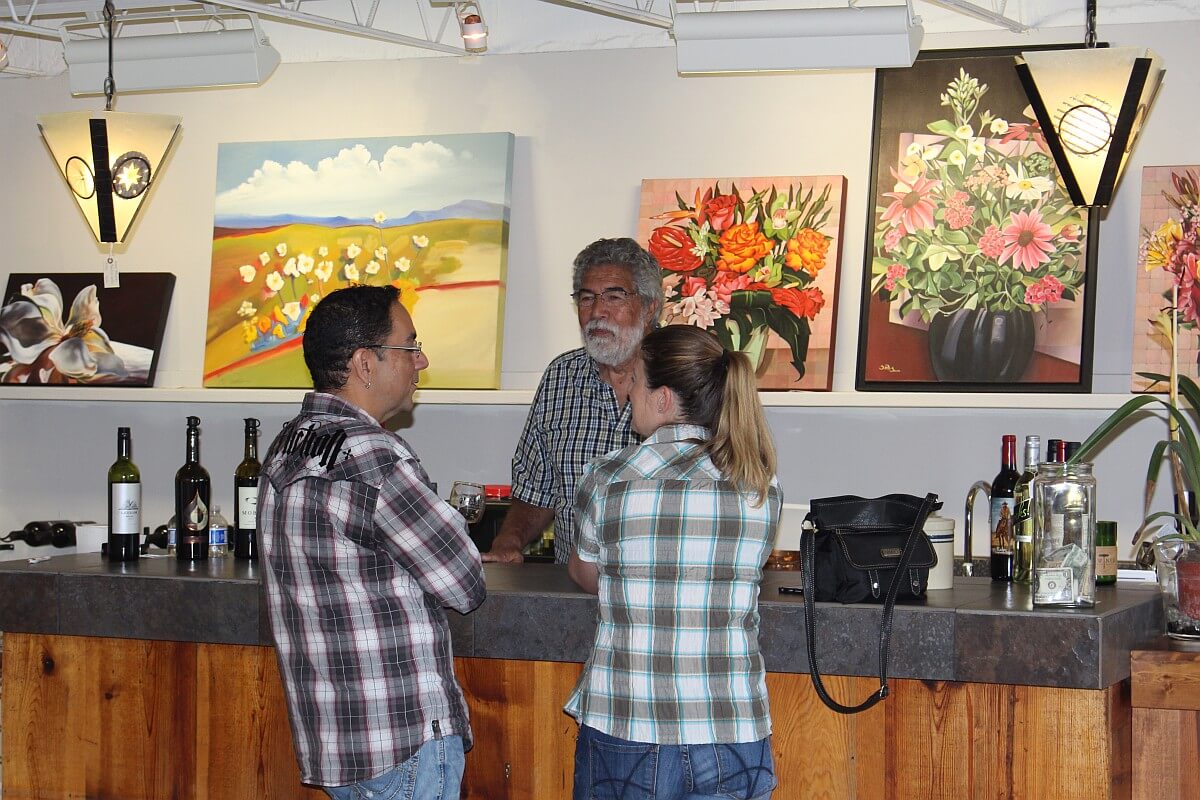 There were no more winery visits on the way home, but a dinner at Jack Allen’s Kitchen in Oak Hill was required. We eventually arrived home at 9 p.m. Sunday night. I guess it wasn’t a “short” weekend road trip after all. But as usual, it had been a very enjoyable weekend throughout various wineries in the Texas wine industry.