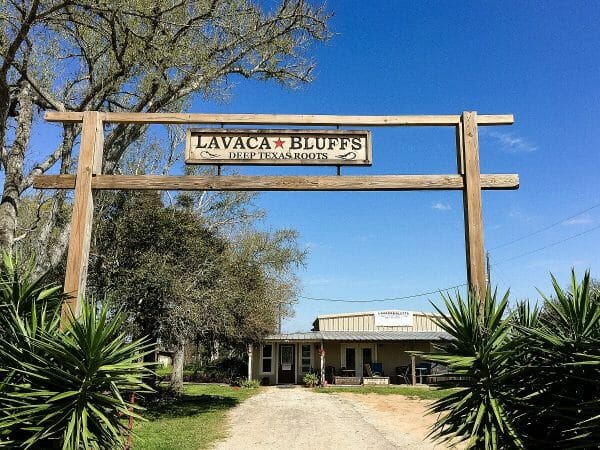 Texas Wine Lover visited Lavaca Bluffs Vineyard & Winery back in 2013 and this past weekend I had the opportunity to visit. Lavaca Bluffs is on the Texas Independence Wine Trail and being the farthest south winery on the trail, it has taken me a while to get there. The winery is located in Lolita, TX along the Lavaca River and is owned by Doug & Beth Reed. You’ll want to get the directions from their website as GPS devices still have issues with finding it. That being said, the directions provided on their website worked great for our trip from Houston. Or you can just use the winery map here on the website or below map to get the directions as those maps use the GPS coordinates.

We arrived well before noon on a Saturday morning and were greeted by a wave from someone over by what looked to be a construction site to the west of the vineyard. More on that later. Inside the tasting room, we were met by Jennifer who directed us to an interesting standing tasting bar made of reclaimed materials, some of which was from an old bowling alley. My wife Carole and I each had a tasting which consists of five wine selections and two sangrias. You may substitute two more wines instead of the sangrias. Since they have a pretty large portfolio of wines, I won’t list them here except to say that there are nine whites and 13 reds. They prepare three sangrias and have three premium port style wines. 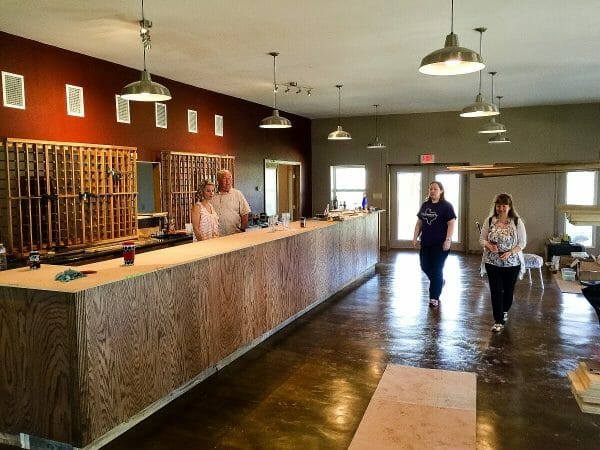 Our tasting was served by Jennifer who has worked in the tasting room almost since the first day and is very knowledgeable about the wines and especially the history for which the wines were named. Each taste came with an explanation of the name, picture on the label, and a history to go with it. There are wines called, “La Salle” (Chardonnay), “Half Moon Reef,” “Sisters’ Mission,” and “Lost Mission” just to name a few. All come with interesting historical significance of the area. I won’t try to repeat it here but simply say you need to visit! One grape they make wine from is the “Convent” grape which I’ve never heard of before, but it has an especially interesting history.

As we got into our tasting, we met Doug Reed and his daughter Meredith. Meredith suggested we grab our last taste and come over to the new building for a quick look at what was going on. As one who is always interested in getting to know the winery owners and get to see what’s going on, we were quick to take them up on the opportunity. 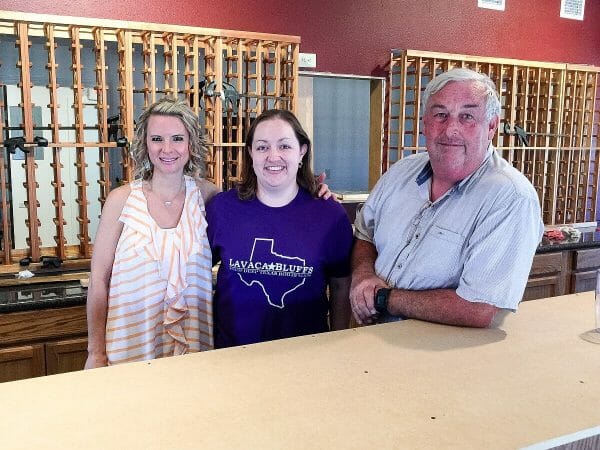 Once we got over to the new building, we found out that it was a new, much larger tasting room. It has probably three times the bar size, room for about 40 sitting customers, a food preparation area, a private room, and a beautiful deck that overlooks the Lavaca River. They hope to open the new tasting room the weekend after we visited (March 12, 2016) or shortly thereafter. The deck will be a showcase for sunsets and a great place to sit out and enjoy a glass of wine. The current tasting room will be used for an expanded production area. Don’t worry, they plan on integrating the “bowling alley” tasting bar into the new facility. If you have not been there in a while or never been there, now is the time to visit. 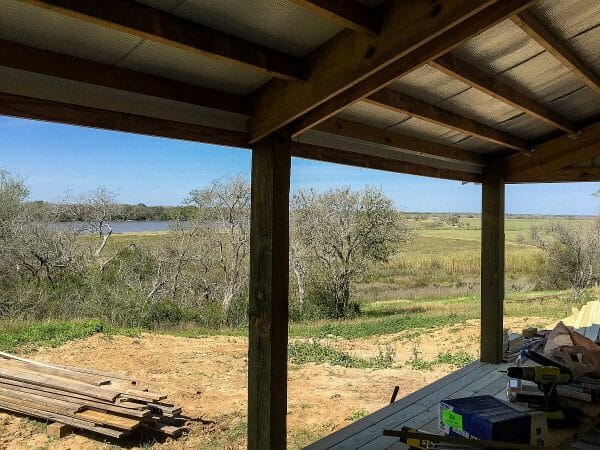 We spent some time talking with Doug, Meredith, and Jennifer and found out that they are starting a “Yacht Club,” details of which are still being discussed and worked out. They’re not completely sure what that will look like but they already have special wine glasses for members. Stay tuned! Doug told us that Lavaca Bluffs sources grapes from their vineyard, other Texas vineyards, and some from California. They desire to get as much from Texas grapes as possible. He also stated that the important thing to know about them is they make every drop of wine on site.

We had a great time during our visit and want to go again. Lavaca Bluffs Vineyard & Winery is not a super long trip from Houston and even quicker from Victoria; an easy day trip. The variety of wine is great and they have something for most wine lovers no matter what style you like.