The Wine & Spirit Education Trust (WSET) awarded Diplomas for completing the Level 4 course and exam to 39 U.S. graduates of a worldwide class of 316 for the 2014/15 academic year. Nine U.S. graduates also received WSET awards as top performing candidates. The ninth annual graduation and awards ceremony was held in the Guildhall in the City of London on January 18.

Hosted by WSET Honorary President Gerard Basset and WSET Chief Executive Ian Harris, the ceremony included over 60 Awards made to the best candidates of the 2014/15 academic year at Levels 2, 3, and 4, as well as the presentation of WSET Level 4 Diplomas to the year’s successful graduates. The WSET Level 4 course in Wines and Spirits requires over 600 hours of study, focused on wine production and business, as well as expert knowledge of global wines and spirits and high level tasting skills.

“We’ve seen an excellent showing from the U.S. this year in terms of the number of Award winners,” said Chief Executive Ian Harris. “Looking at the list, what impresses me most is how varied it is. The winners come from all over the country – anywhere from California to Connecticut, and they work in education, wholesaling, PR and advertising, importing, and consulting. It shows just how relevant WSET is across the American wine and spirit industry.”

As you saw, Sheri Pattillo of Kerrville, TX, won the Wine & Spirit Education Trust (WSET) Republic National Distributing Company (RNDC) Scholarship. Sheri is always present at TEXSOM, the most prominent and influential professional beverage education and training conference in the United StatesStates, which is where I met her for the first time. And I am now proud to say Sheri is a friend. Congratulations Sheri! 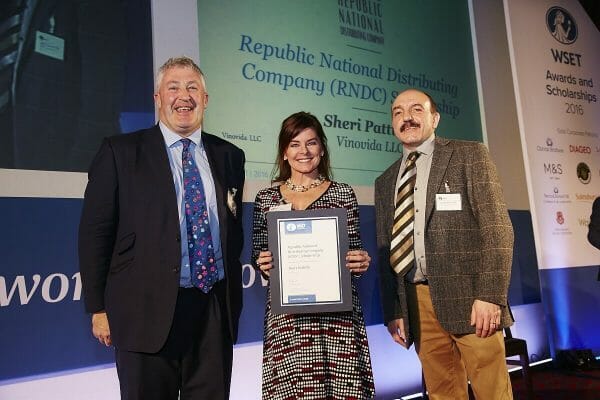 Sheri Pattillo in the middle