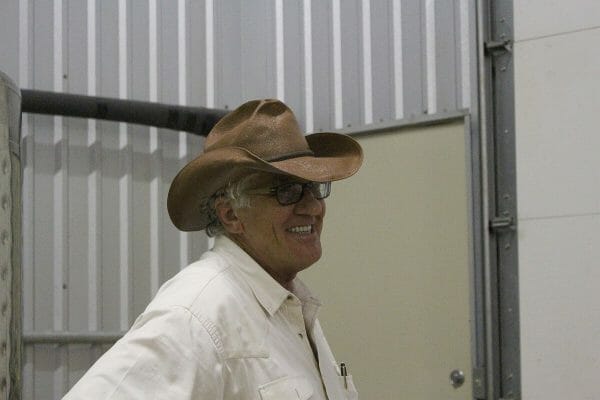 We were all shocked and saddened to learn Tuesday afternoon, January 26, 2016, that Pierre de Wet, the founder of Kiepersol Estates, had passed away that morning at the young age of 61. The rest of the day involved people on Facebook reliving memories and photos of Pierre. When people start changing their Facebook profile photos to a photo of another person, in this case Pierre de Wet, you know he had made an impact on their lives.

I could give you a background of Pierre de Wet, but fortunately for all of us, he enjoyed writing on the Kiepersol blog but also wrote his own book on his journey from South Africa to the United States. With two young children in tow and four suitcases with all their belongings, the 162 page book is a fascinating and very easy read into the incredible life of Pierre de Wet. I would highly recommend ordering the book and you will find you will not be able to put it down. It can be bought at a few places, but there is a website devoted just to the book and accompanying musical CD.

Instead, I will tell you how I met Pierre de Wet and how he affected my life. I first met Pierre when I visited Kiepersol Estates Winery again in August 2013. My fiancée Gloria was not able to visit with me, but I did meet up with a few friends. One of Kiepersol’s sommeliers, Lisa James Turner, followed me and vice-versa on Twitter. When we arrived at the winery to do a tasting, Lisa was our tasting guide. After we started our tasting, Kiepersol employee Terry Morrow said the tour was going to start and to bring our wine glasses. We headed out the door to the patio and around the building, and I did a double-take at one of the men sitting on the patio. He had watched us all coming out for the tour too. 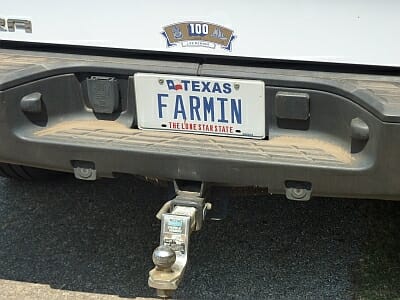 The tour began and the vineyard was the first stop where we noticed a pickup truck with the license plate FARMIN. Terry said that was Pierre de Wet’s truck which confirmed that must have been him sitting on the patio. While we walked to the production area, I tweeted Lisa and asked if that was Pierre. When our tour group was down in the barrel room, Pierre de Wet came walking down the stairs, introduced himself to the group, and answered a number of questions people had. A wine tank sampling was then done by Pierre with the group. Pierre had a Dirk’s Vodka hat on and explained they would soon be offering vodka for the first time (this was before the distillery was built) and if anybody wanted to sample a little bit of the Dirk’s Vodka, to follow him. Most of the tour group did exactly that and we got our first sampling of Dirk’s Vodka in the early stages. In fact, Pierre said it was the first tour group who had gotten to taste the vodka.

After the tour, we went back to the tasting room and finished our tasting. Pierre eventually came in and my friends and I talked more with him. Here was a man who had created a multi-business enterprise and I just envisioned he would be unapproachable. In fact, it was just the opposite and he was such a down-to-earth man. What floored me though, was after talking with us and learning who we were, he was the first person in the Texas wine industry who said, “I want to have a photo taken with Jeff.” What? I’m the one who takes the photos of wine industry people and never thought I would have the opposite done with me. It was an experience, and I knew Gloria and I would be visiting Kiepersol as much as we could. 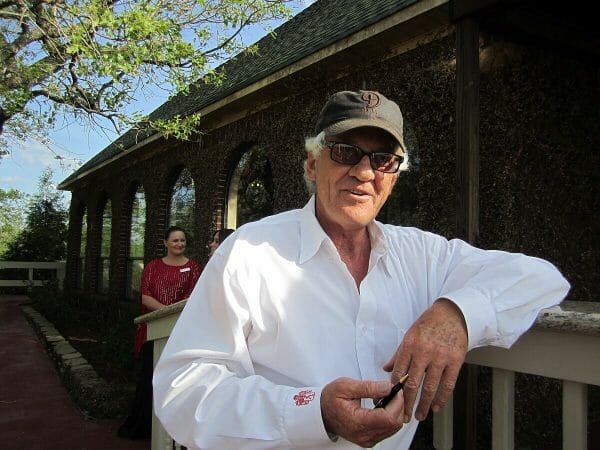 The distillery opened at Kiepersol the following year, and Gloria and I were invited to the premiere. We did a wine tasting with Marnelle Durrett, one of Pierre’s daughters and Kiepersol’s head winemaker. After the wine tasting, we headed to the distillery and there was Pierre with his ever present smile on his face to welcome people to try Dirk’s Vodka with a cocktail. He was signing bottles of Dirk’s Vodka and of course we had to buy a bottle and have Pierre sign it. We were fortunate to stay in Kiepersol’s Stable House which can be reserved for a night’s stay. The next morning, we ate breakfast in their Bed & Breakfast. While eating breakfast, we saw Pierre come in to talk with the employees. He saw us and came over to sit with us while we ate. He told us the story of his recent trip to South Africa and the wineries he visited while there. We talked about the huge wine cooler in the restaurant and how we wish we had one that size at our house! That weekend had been the first time Gloria had met Pierre. He treated us, probably like everybody else, as part of the Kiepersol family. 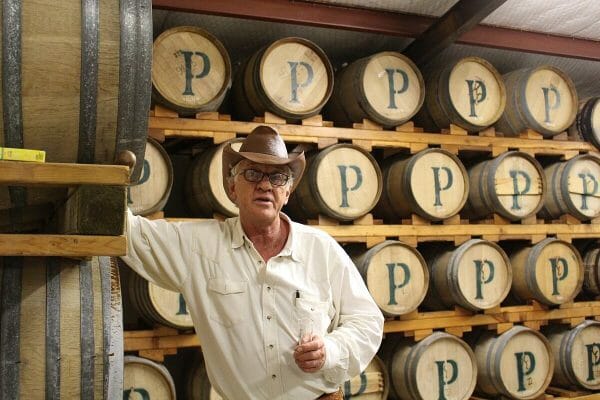 One time as we arrived at Kiepersol when they opened, Marnelle parked next to us at the same time, and we walked up to the two tasting rooms together. We met some friends there and visited the distillery first. Pierre soon arrived and he and Marnelle gave all of us a tour of the distillery. He enjoyed showing us how the stills worked and future products they would be releasing. In fact, we learned if the employees of Kiepersol cannot find Pierre, they had a good chance of finding him in the distillery working on things. 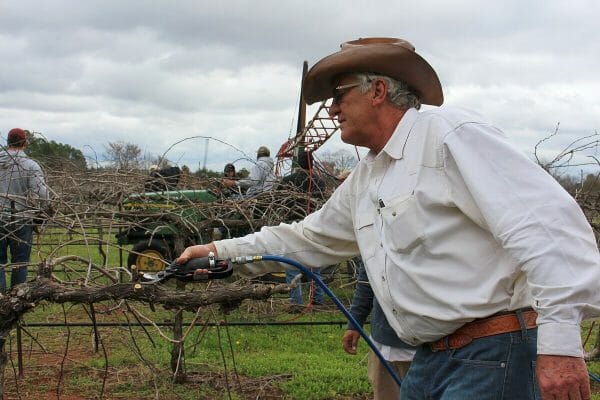 Pruning was happening in one of their vineyards and we were all asked if we wanted to take a tour of the vineyards. Of course! So we hopped into two golf carts and off we went. When we arrived at the one vineyard being pruned, a crew was using pneumatic pruners instead of doing it by hand, and Marnelle had to take a turn in seeing how pneumatic pruners worked. Gloria commented how we had a few Blanc du Bois vines growing in the backyard and Marnelle asked if we wanted to take some Syrah cuttings home. She didn’t have to ask twice. Marnelle went to work on creating some cuttings for Gloria and handed them to her. Nothing against Marnelle, but when Pierre saw the thin cuttings, he grabbed some pruners and went to work finding some thicker cuttings, cleaned them up, and gave those instead to Gloria. Gloria has them rooted in pots and within a month we will be planting them in the ground. It will be nice to watch those vines grow knowing they came from Kiepersol and Pierre de Wet’s hands. 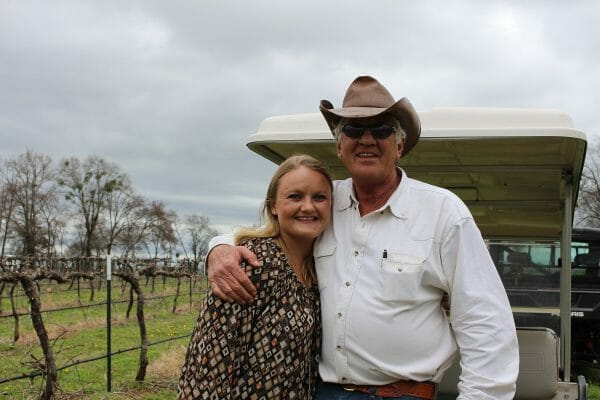 Speaking of vineyards, everybody knows you cannot grow Vitis vinifiera grapes east of I-35 in Texas. Somebody must have forgotten to tell Pierre that because he found a way, and all of Kiepersol’s wines are made from their 16 varieties of estate grapes. In fact, he has taught other wineries how to also grow Vitis vinifera including Dawn Leatherwood of Pelle Legna. Yes, Pierre grew up being a farmer and you can see what he was able to accomplish every time you taste a Kiepersol wine. In fact, Keipersol has a couple wind machines in the vineyards which is becoming common in the High Plains, but Pierre had them installed years ago; he was a true visionary.

Gloria and I took a trip to East Texas this past December and with our schedule of appointments, we could only spend one hour at Kiepersol, but we had to do it. We arrived when they opened and went directly to the winery tasting room and started a tasting with sommelier Steven Turner, Lisa’s James husband. Soon Marnelle and Pierre arrived, greeted us as usual, and had to take care of other matters in the tasting room. We always ask what grapes are in the wine if it’s a fanciful name or a blend. We were tasting one wine and Steven said they wouldn’t tell him what the grapes were because they were proprietary, but we all made some guesses. Jokingly, I told him I’d ask Pierre because he would tell us. Pierre came over, I asked him, and sure enough he told us. Steven and I both looked at each other in amusement. I could tell you what they were, but I already forgot. 😉 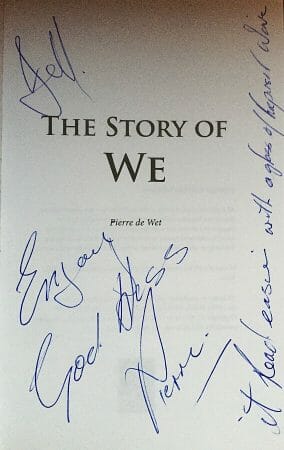 This was the last time we saw Pierre de Wet. As I mentioned before, he always had a smile on his face when he talked with us, and he was one of the most gracious and generous men I have ever met. I had to have Pierre autograph my book The Story of We one time because of the tremendous respect I had of what he went through and what he was able to accomplish. When times are tough for me, I sometimes think of Pierre and I persevere and work through the times. Pierre was a devoted Christian man and I am sure we will meet again some day. Cheers to you Pierre!

Epilogue: Pierre de Wet founded the charity Mane Mission, a 501(c)3 charity for the betterment of the lives of the mentally challenged. In lieu of flowers, donations are encouraged for Mane Mission. 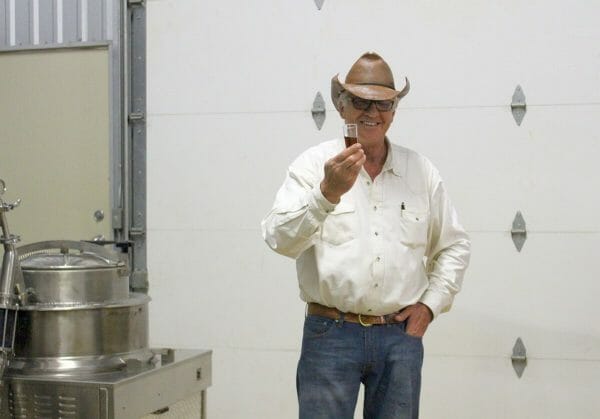