We were in Anaheim, California before Halloween and we made the decision to visit some wineries. Hey, it’s what we do! The closest group of wineries to Anaheim are in Temecula so that’s where we headed. We have been to wineries closer to San Diego together and in Napa Valley separately, but that was in our “earlier” days before we knew a little bit more about wine.

I planned the day trip to Temecula and determined the best wineries to visit. What I found first was one winery, Hart Winery, opened at 9 a.m. Hey, that works for us! Other wineries opened at 10 or 11 a.m. Temecula is similar to U.S. Highway 290 in the Hill Country because most wineries are open every day. This was great because we were going to be visiting on a Wednesday, and that also meant less crowds and more time to enjoy.

After looking at the map of Temecula wineries on the Temecula Valley Winegrowers Association website (fantastic resource and coupons!), the Temecula wineries are situated in almost an oval shape where you can make your way around the loop. There are too many wineries to visit in one day, but that means there are other wineries you can visit next time.

Hart Winery is one of the first wineries you encounter on the loop which was great because they were the ones that opened at 9 a.m. We didn’t arrive until 9:30 a.m. because we knew the next winery to visit was pretty much next door and we were not sure how long we would be at Hart. We should have planned better.

Our tasting guide at Hart Winery was great! She gave us an excellent introduction to Temecula wines and also the wines they make. Tastings are for six wines and we decided to get separate tastings and wines so we could taste more wines out of the 14 wines available. The first wine tasted was a 2014 Arneis. This was a new wine to us and the grape is native to Piedmont, Italy. The grapes for the wine came from the Temecula winery Ponte Family Estate Winery which we had planned on visiting later in the day. A lot of the wineries in Temecula also have estate vineyards. Hart Winery gets some grapes from local wineries but there are also local vineyards too.

Hart Winery makes 3,500 cases of wine a year. During the tasting of the wines is where we got our first surprise of our visit. We figured after hearing about California wines, you’re going to primarily get Chardonnays and Cabernets for which California is known for. However, suddenly we were tasting Italian, Spanish, and Rhône varietals. Hmm, this sounded like Texas! Thinking about it a little, southern California where Temecula is located, is very similar to the Texas High Plains when you look on the map, so that does make sense. Surprisingly, we were not the only ones who learned this. They have had customers from the Napa area go down to Temecula and ask for a Chardonnay. “You might want to go back to where you came from because the wines here are different than Napa.” Primarily, the climate is different in Temecula than Napa.

There was one thing during the tasting which we had not experienced before in Texas. We were given a little oyster cracker bag for cleansing our palate. Maybe it’s just the Texas way, but if crackers are given, a bowl is available for everybody to grab from. But then again, this was more sanitary and limiting to the amount of crackers you could consume. We would experience some of the same at later wineries. 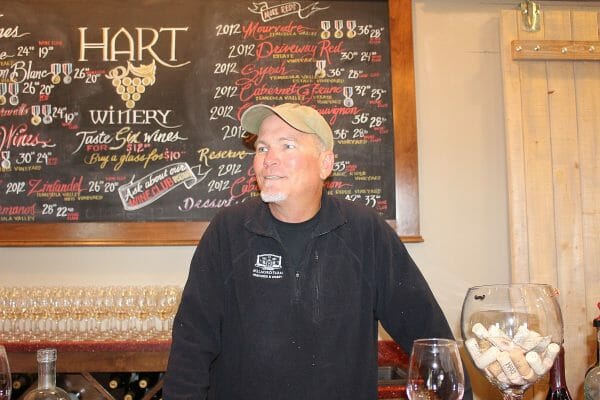 Some of the other wines we tasted at Hart Winery were:

As you can see, many of the same wines made in Texas are also made in Temecula. We also were reminded of another Texas connection, a winemaker, who we would meet later in our winery visits. We did have the chance to meet Joe Hart, the founder who opened Hart Winery in 1980, and had a nice visit with him before we had to leave for our next winery.

Our next winery, which is pretty much a next door neighbor, was Callaway Vineyard & Winery. Callaway opened in 1969 making it one of the first wineries to open in Temecula. The winery today has 20 acres of estate vineyards growing nine different varietals and more in another vineyard location. After driving up the hill to the winery, we arrived and entered Callaway Vineyard & Winery. One thing that surprised us immediately was we needed to buy tasting tickets first which included a total of six tickets. This is similar to at least one winery I can think of in Texas, but was a little unusual for most wineries, especially if you want to buy a glass of wine or bottles after your tasting. 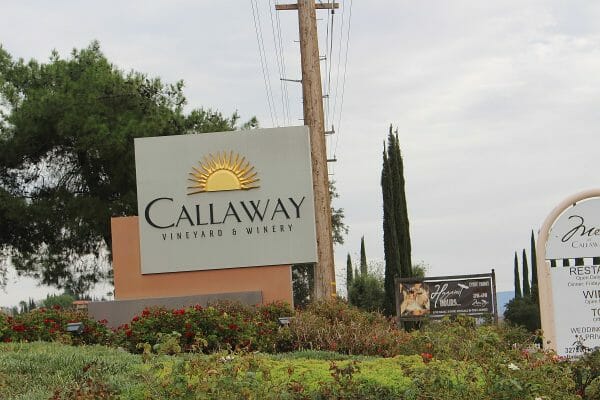 After our tasting guide learned we were from Texas, he told us that Temecula was one of the best growing regions in California for Viognier, of course also very popular in Texas. This was our second encounter with a private cracker bag and this was unique because it was just crackers packed into a Ziploc bag. The tasting glasses didn’t even have the Callaway logo on them and we were told when the masses come on the weekends, they end up losing a lot of wine glasses, so they stopped buying more expensive glasses with the logo. 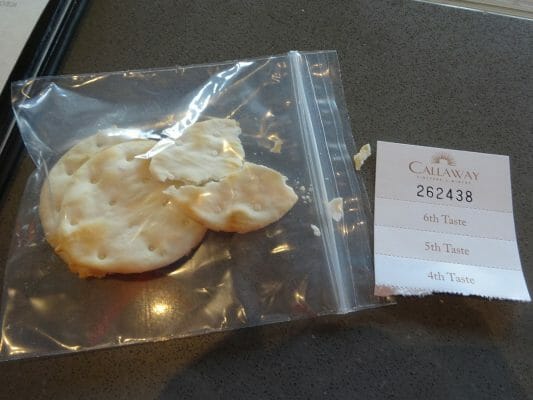 At Callaway Vineyard & Winery, we encountered new wines of Pinot Gris and Chardonnay, but also the familiar Mourvèdre. So far, the trip to Temecula was a wise choice. 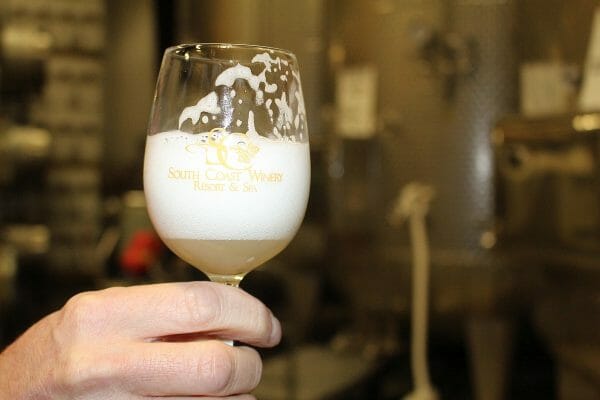 Our next visit was South Coast Winery Resort & Spa. Here the Texas connection was very strong. That’s because the winemaker is Jon McPherson who is the brother of Kim McPherson, owner/winemaker of McPherson Cellars. We were fortunate that Jon was available because they were bottling sparkling Shiraz for Halloween and he graciously met us. We went to the bottling line and Jon gave us a tour of the production area. We have never seen a sparkling wine bottled on a bottling line, so it was a treat to see how that big cork gets into the bottle and everything wrapped up in its cage and foil capsule. Even better was Jon grabbing a bottle off the line for us to taste. I never thought of a sparkling Shiraz before, but oh, it was good! 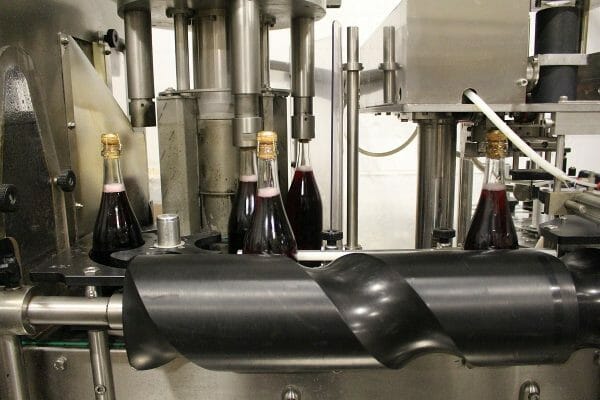 The sparkling wine at South Coast is done using the Charmat method and there were tanks of future sparkling wines we got to sample (Pinot Grigio and Gewürztraminer). In fact, Jon said that some of Kim McPherson’s wines that needed to be bottled were waiting at the winery. We were very fortunate as we got to sample quite a few wines out of tanks and in fact, the only finished wine we got to taste during our South Coast visit was the sparkling Shiraz (Ruby Cuvée) from the bottling line. But we would never have traded that experience for a regular tasting. And as is typical with McPherson Cellars’ wines, all that we tasted out of the tank were very good and we could envision the finished product. 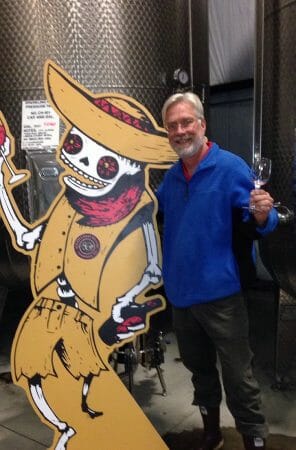 South Coast currently has over 200 acres of vineyards and produces 60,000 cases of wine a year. They make 8-10 sparkling wines and the rest are still wines. South Coast Winery Resort & Spa’s first vintage was in 2001 and the winery opened in June of 2003 by Jim Carter who also owns Carter Estate Winery & Resort nearby. Jon recommended we finish our day at Carter, so we changed our plans to make that happen.

Many of the wineries in Temecula have tours available which usually includes a tasting for a higher fee. We decided to do one tour and chose Leoness Cellars for that tour. We arrived at our tour time and soon took our tour that included a golf cart tour around the estate vineyard and ended with a tasting. There are currently 15 acres of Cabernet Sauvignon grapes planted at the estate vineyard and they are in 18 leaf. We were told that they wanted to a French style winery, so they needed to graft a French style rootstock to the Cabernet. The winery makes 20,000 plus cases of wine a year which includes 8-9 varieties. The tasting included eight tastings which were very good. 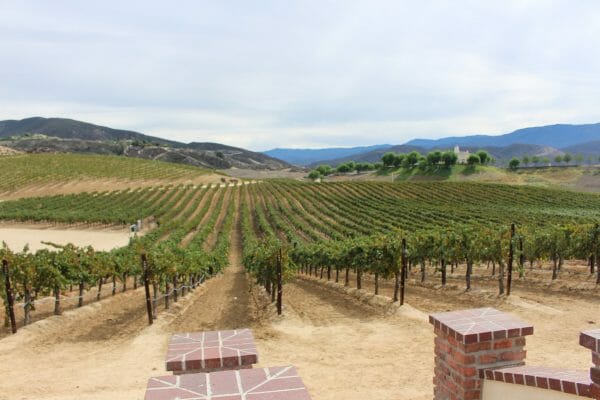 It was now after 2:00 p.m. and since the Leoness Cellars restaurant was not open on a Wednesday, we went next door to Robert Renzoni Vineyards winery and restaurant. We went immediately to the restaurant and had a great lunch. Time was getting short and even though we didn’t have wine during lunch, I don’t know if we were more cognizant on the time or the wine was affecting us already, but we somehow skipped the wine tasting at Robert Renzoni.

We then went to Ponte Family Estate Winery. We were excited to try the winery because we heard there was another Texas connection between the winery and Rancho Ponte Vineyard in Fredericksburg. The tasting bar was full with 21 customers and two tasting guides. I stood in the middle, while Gloria excused herself for a moment, and one of the tasting guides soon said the other tasting guide would help me. After 15 minutes, the other tasting guide (nor the previous one) ever acknowledged me, so when Gloria was available I told her it was time to go. There was a great gift shop, but I can’t tell you about the wines. It was a shame not to be able to talk about the Texas connection, but that’s how it goes sometimes at a winery.

On to Carter Estate Winery & Resort which Jon McPherson recommended. As we soon learned, Jon recommended the winery because they had different style wines (more fine wines) but also had the same owner and winemaker (Jon). Owner Jim Carter opened Carter Estate Winery & Resort earlier in May, 2015. The winery has 109 acres of vineyards there and totals 400 acres of vineyards including elsewhere. 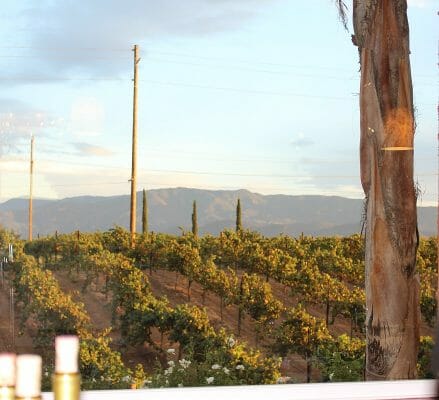 The tasting menu said that “Carter Winery and Resort has been built exclusively for the production of world class Sparkling Wines. Using the class ‘Methode Champenoise’ our production includes the classic cuvees: Blanc de Blanc, Blanc de Noir, and Brut.” In addition, “Carter Estate is also the home to the best wines the Temecula area has to offer. The best barrels from the best blocks of the best vineyards in the best vintages go into these limited edition wines.” These are some of the wines that were available:

It had been a long, but fruitful (no pun intended) day in Temecula and we barely touched the surface of the wineries we wanted to visit. The connection to Texas wineries is pretty strong and we now know the wineries we want to visit the next time we are in the area.