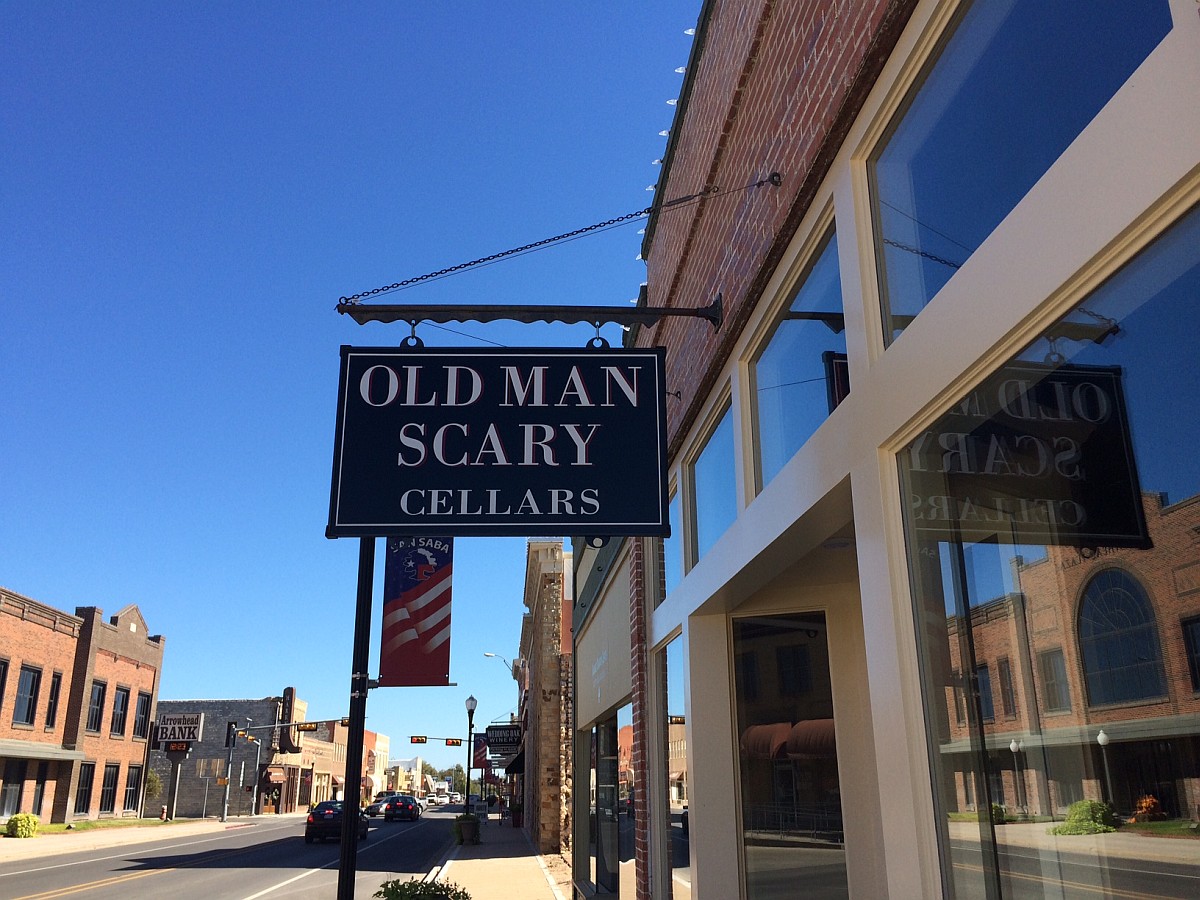 Wedding Oak Winery will launch the first incubator winery project in Texas with the opening of Old Man Scary Cellars on Saturday, November 21, 2015. Conceived with new Texas start-up wineries in mind, Wedding Oak Winery purchased a 1924 historic building in the same block as its San Saba winery, restored and re-purposed the building to house a retail tasting room and winery production facility.

Mike McHenry, partner, Wedding Oak Winery explained, “We bought the building in May of 2013. In October, I was in Walla Walla, Washington, and had an opportunity to look at the incubator project there. In January of ’14, I was in Willamette Valley, Oregon and saw the incubator in Carlton which is called the Winemakers Studio. So with the project in Walla Walla followed by the one in Carlton, I came back inspired. I said we’ve got the building and we have the ability to help people get started. We’re providing not only assistance in winemaking which is custom crush, but also the building, the tasting room, and the know-how of how to operate one, so we can help people who want to get into the business. This gives them the opportunity to get in with less capital and get started at a lower entry cost.”

“Opening Wedding Oak Winery in the heart of San Saba near the intersection of U.S. Highway 190 and State Highway 16 is an important part of the renaissance of this lovely small town,” said Mike McHenry. “We are now surrounded by vibrant businesses like the Dofflemyer Hotel, Oliver and Co. Restaurant, Harry’s, and San Saba Olive Oil that bring visitors to town. Adding another fantastic destination with Old Man Scary Cellars is an important part of boosting our tourism, while contributing to the growth of the Texas wine industry.”

“The idea for Old Man Scary Cellars started when we moved to 20 acres of land in Terry County,” says Dr. Gabe Hisel, founder of Old Man Scary Cellars. “Terry County is known as the ‘Grape Capital of Texas.’ We have many friends in the business and it inspired us to plant Cabernet Sauvignon grapes in Rattlesnake Road Vineyard on our property. Our goal is to make the best Cabernet Sauvignon in the state of Texas. The grapes we have in our vineyard are not mature yet, so until we have a premium Cabernet from our vineyard, we will source the best grapes we can get. We chose to partner with Wedding Oak Winery in an incubator arrangement to take advantage of their expertise to get into the market faster. Things have come together quickly and we have wines ready to sell, including our 2013 Cabernet Sauvignon made with grapes from the world famous Beckstoffer Vineyards.”

Old Man Scary Cellars offers a range of Texas wines and wines made with fruit grown in other states including:

One wine was made in Brownfield and all the others were made at Wedding Oak Winery. As we also previously reported, Old Man Scary Cellars is a member of the Texas Hill Country Wineries.

You may now be asking the question everybody probably is asking: where did they get the name Old Man Scary Cellars? The name comes from an old farmhouse on the Hisel Family estate in Hockley County, Texas. Once the scene of a death, the house was thought to be haunted by an evil spirit. However, events have since occurred that prove some spirits, despite their appearance, can be helpful in viticulture and viniculture.