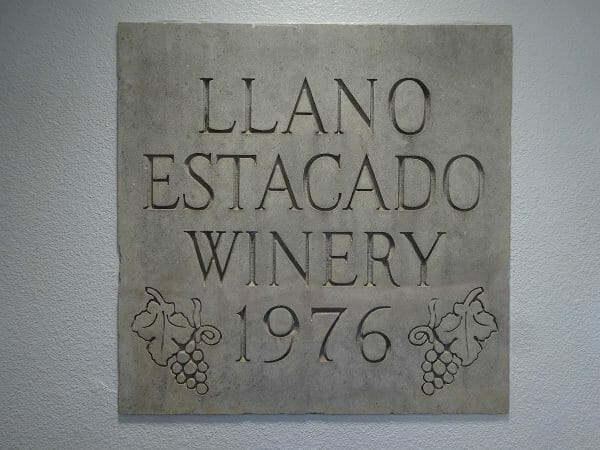 Llano Estacado Winery in Lubbock first opened in 1976 and has been growing ever since. President and CEO Mark Hyman joined the winery in 1994 and at that time, the winery was producing 38,000 cases of wine. Today they are producing 165,000 cases making it the largest premium winery in Texas. Even with the continual growth, the winery is undergoing a rebirth to recreate themselves. Llano Estacado invited some bloggers and writers to Lubbock to see firsthand the transformation that is taking place.

We arrived at the Lubbock airport from Austin, Dallas, and Houston, and were greeted by Mark Hyman, Vice President Executive Winemaker Greg Bruni, Vice President of Sales and Marketing Bill Freidhof, and newly promoted Winemaker Jason Centanni. Everyone was loaded into two vans and we headed south to Brownfield in Terry County, the Grape Capital of Texas, and home to Reddy Vineyards.

Vijay and Subada Reddy along with Neal and Janice Newsom of Newsom Vineyards were waiting for our arrival, two of the vineyards that work with Llano Estacado who is proud to work with their local growers. In the center of Reddy Vineyards is a two story building where equipment is stored and the second floor houses living quarters along with a balcony providing a gorgeous view of the 280 acre vineyard. After pleasantries were held, wine started flowing and a light lunch was provided. The first wine was a Llano Estacado Winery 2014 Pinot Grigio from both Reddy and Newsom vineyards which was very crisp and done in a dry style. What an excellent way to start the day. The other wines tasted were:

While we enjoyed the wine, Vijay and Neal told us about the 2015 harvest. As most people have heard, 2015 was a very good year for grapes with a bountiful harvest in most areas of the state. Out of Neal’s 140 acre vineyard and 12 varieties of grapes, the Tempranillo seemed to do the best. Neal’s oldest vines are Cabernet Sauvignon, which are 30 years old, and they are still producing.

Vijay has always grown a large number of varieties and now has 30 different grapes. His oldest vines are 18 years old. He averaged about four tons an acre this year and said, “If you can average between four and six tons, that’s the best.”

Even though the High Plains is arguably known for the best grapes in Texas, the distinction between vineyards is dramatic with the elevations being different, even sometimes within a few miles of each other. The Reddy and Newsom vineyards are located 36 miles apart. Not much irrigation was needed this year by the two vineyards. Vijay only had to irrigate one time in the late fall and Neal only irrigated for five days near the end of the season because it looked like an extended hot season.

When Neal was asked if he needed to use bird control, his reply was, “No trees, no birds, no bugs, no bears.” It was a perfect ending for the visit at Reddy Vineyards. 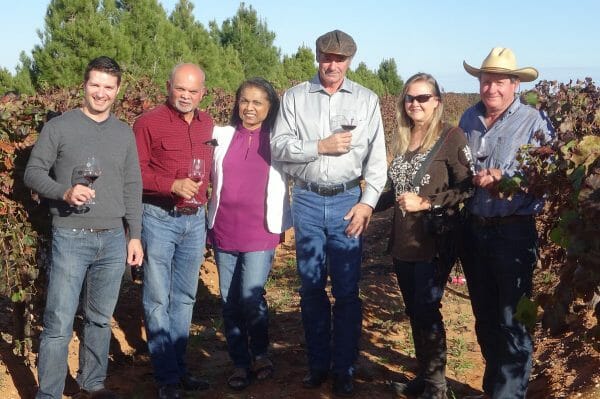 After a wonderful time at the vineyard, we boarded the vans to make our trip to Llano Estacado Winery. We were getting excited to see part of the rebirth of the winery and that was the new tasting room. Driving down FM 1585, we could soon see the large winery with the words “Llano Estacado Winery” on the side of the building. Was this really the same winery? The new addition, the fourth or fifth for the winery since 2000, made the winery look completely different and modern along with today’s newly built wineries. 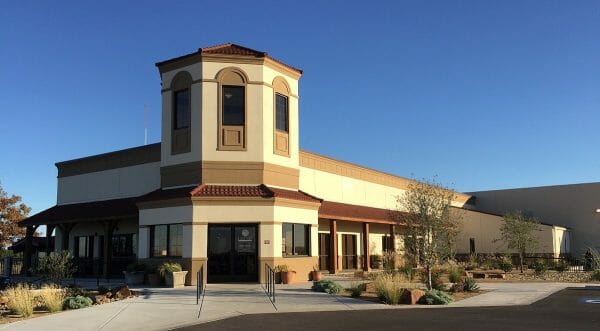 Photo opportunities were taken in front of the tasting room and we saw the 13 acres of white cotton next to the winery. Llano Estacado owns the cotton property and leases it to a cotton farmer. We then entered the new tasting room. Yes, no doubt this was definitely a great addition to the winery. Waiting for us was Llano’s 2014 Signature White (Chenin Blanc, Sauvignon Blanc, Chardonnay), another fantastic wine for the day. We admired the new tasting room, talked some more, and then it was time for a tour of the winery. 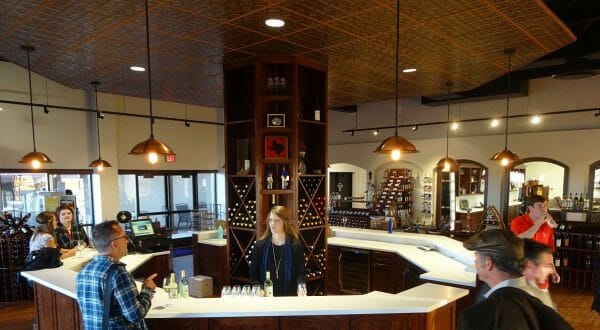 For those of us who had toured the winery before, it has changed dramatically in the front. The old tasting room has been divided to become a bridal suite for brides to prepare for their wedding along with a welcome room. The first part of the previous production area with the micro-oxygenation tanks has been completely overhauled. That area is now a large event center and the tanks have been moved further to the next part of the winery which is the start of the production area.

That area was the next part we toured. Llano always had a display about barrel making which was interesting and unique from every Texas winery I have visited. Unfortunately with the remodeling and space needed, that display is now gone. Greg Bruni started our tour and the first stop in the production area has large tanks next to the laboratory including the addition of the micro-oxygenation tanks.

Next was the laboratory where Jason Centanni took over that area of the tour. Jason comes from a bio-chemistry background which helps with the winemaking, and the laboratory helps him make the decisions necessary as a winemaker. The laboratory also has an OenoFoss instrument that analyzes wine and gives a full lab spectrum. Greg added, “During harvest, we might have 30 to 40 fermentations going on that are sampled every day and analysis is run on the wines every day. The trick is if there is a problem, get it before it is a problem. With the introduction of the OenoFoss, a plethora of analysis can be done in just a matter of two minutes. It’s a very good tool and it replaced a whole person really.” 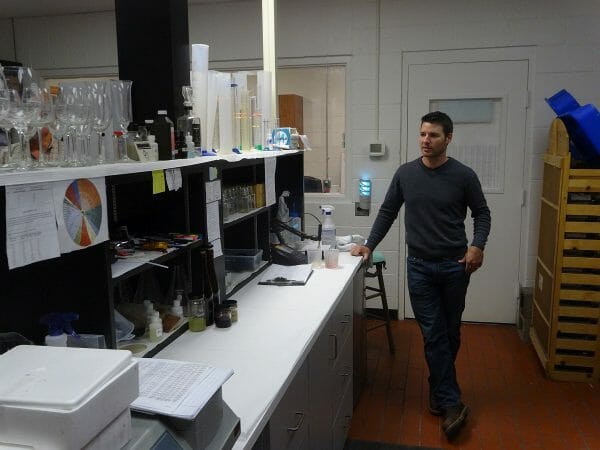 Moving to the micro-oxygenation tanks, Jason explained how they help the winery. He said, “It’s just modernization in winemaking. Basically all we’re doing with microOx is we’re applying pure oxygen to a controlled batch of wine with or without the addition of toasted oak in the form of different adjuncts, either staves or chips. These are the same oak that is used to make a barrel. It’s using the oak that has slight imperfections in it and they can’t create a barrel out of it. MicroOx allows us to texturize the wine in a slightly shorter period of time than we would get from traditional barrel aging.”

Greg said he comes from the modern era of winemaking and Jason is from the post-modern era of winemaking, and together they work to make the best wine possible from the tools available. We viewed other technology being used at Llano Estacado such as a crossflow filtration system by Koch Membrane Systems which dramatically decreases the amount of time necessary for filtration. Near the crush pad which processes 18 tons of grapes in about 35 minutes were the empty grape bins used to provide the winery with grapes from the vineyards. Unlike the smaller bins used at other wineries, Llano Estacado uses two ton grape bins. The rear large production building houses stainless steel tanks with a capacity of 120,000 gallons.

After a quick trip to the bottling line, it was now time for the barrel room and when we entered, a long table was set up with many wine bottles. They had lined up their Texas appellation wines and surprisingly there were close to 50 wines.

The bottles were arranged by row with on-premise wines first, H-E-B wines, traditional Llano labeled wines, Texas Tech labels where money goes back to the school, and wine club wines. I recognized some of the labels, but I was not aware that Llano Estacado Winery made that many varieties of wine. And again, these were just the Texas appellation wines. Even with the wines they have labeled as American which were not present, they ferment every one of their wines at the winery except the Blush material. Mark explained, “It is our intention to go back to Texas appellation on everything probably except for Sweet Red and Blush. Why? They’re $5.99 and $6.99 wines and we cannot get Texas grapes and juice for that price.” 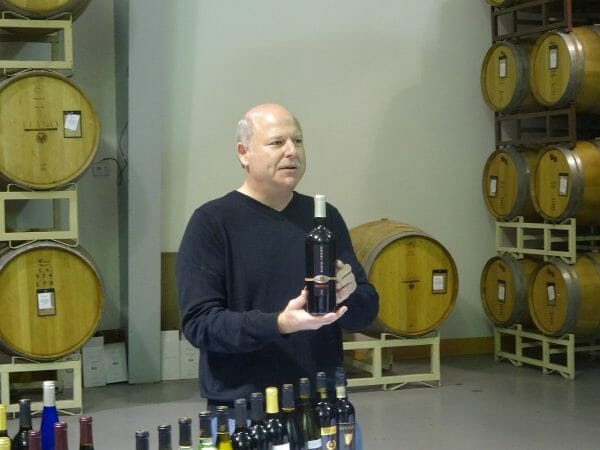 These are some of the wines we tasted in the barrel room:

Then we tasted a couple barrel samples:

I had tasted the 2013 Montepulciano from the barrel last year in a visit to Llano and I was excited to see how it had progressed. Most of it was put in the blends we tasted but there was still some left in a barrel for later use. 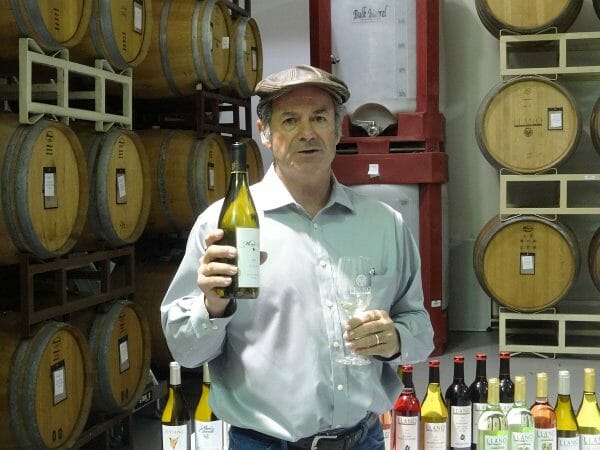 It was time for dinner and we retreated to the event center which had been set up with 16 place settings and name tags already assigned. Joining us for dinner was Mike Laughlin, Director of Hospitality, and McPherson Cellars‘ Assistant Winemaker Spenser Igo. The menu was called Taste of Texas and was a four course meal with each course paired by at least one Llano Estacado wine and at least one McPherson Cellars wine. The entrées were chicken breast and bacon wrapped beef medallions to satisfy any appetite. The entire meal was delicious and of course the wines were stellar. 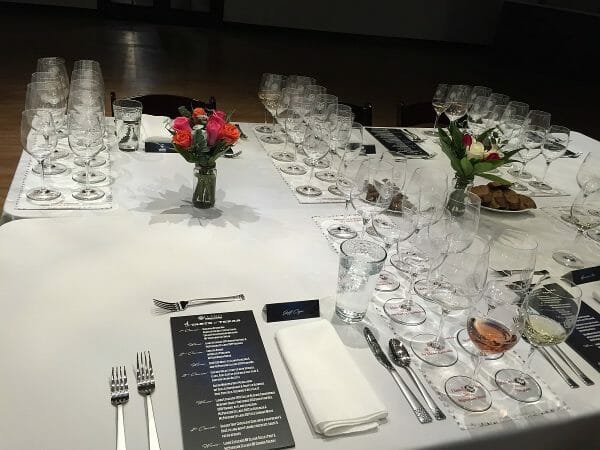 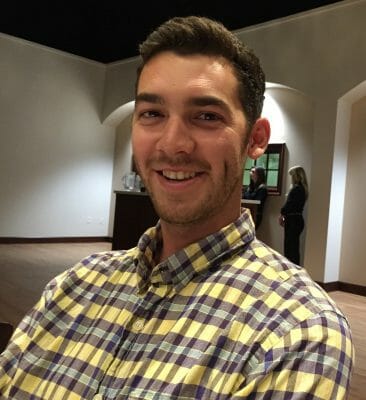 The Reddys and Newsoms joined the group for dinner and we got to enjoy a new Llano wine called Newsom Family Vineyards 2013 Inception Red. 2013 was a bad year for grapes in the High Plains and especially for Newsom Vineyards where they lost most of their fruit. Llano worked with the Newsoms and produced this new wine with their help, and Neal said there are probably 9-10 red grapes in it. There were only 35 cases made and it will be released in January. Even more special with the wine is a metal Newsom logo with rawhide tying it to the bottle. The Newsoms and Reddys came to the winery previously to attach all those signature medallions to the bottles. 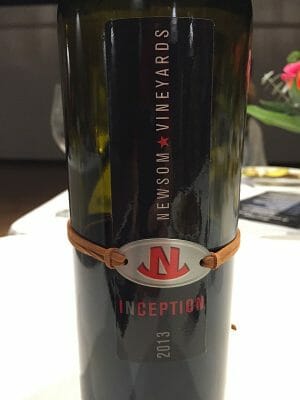 Mark Hyman and Greg Bruni were common in their voice saying when they arrived to the winery 22 years ago, Greg was in charge of what goes in the bottle and Mark takes it from there. It is apparent that the joint venture is working for the winery along with the rest of the assembled team. With the rebirth of the winery, a question was asked why they didn’t open a tasting room in Fredericksburg like others have done. The response was they want to give back to the community. The community of Lubbock should be very happy that Llano Estacado Winery is in town.