Pickup parties at wineries are always fun and definitely a great reason to be a wine club member. In all our travels to over 250 wineries in Texas, we wish we could join many wine clubs, but that is just cost prohibitive especially with the shipping costs, so we settle on buying a bottle or more of our favorite wines instead when we visit wineries. We are members of five wine clubs at the moment. A lot of pickup parties seem to be held on Sunday afternoons and usually it is a 3-4 hour drive to home from those wineries, so it makes it tough to attend pickup parties. I was invited to be a judge at a Messina Hof Hill Country event and since two of our wine clubs were having pickup parties that weekend too in the area, we finally could attend a pickup party.

Fortunately Gloria and I were both able to take the Friday off so we took advantage of visiting some wineries on the way out to Messina Hof Hill Country. We first visited Hahne Estates Winery in Johnson City when owner Gary Hahne was just opening up. It was great to see Gary again and you can read about our experience on our previous post.

At the end of August, we did a road trip to the Hill Country with the owners from the Nice Winery and at that time I used the phone application Periscope for the first time. We broadcasted at each winery we went to when we arrived and told a little about the winery before we went in to enjoy a tasting. When we visited William Chris Vineyards and I broadcasted, Rachael Theberge from William Chris saw the broadcast on Periscope and surprised us at the end of our broadcast. This time I was going to see if I could surprise her again. Here’s the video of my broadcast and as you can see, I did not surprise Rachael and we ended up doing what I will call the first dual Periscope broadcast where I was broadcasting her and she in turn was broadcasting me. We took a nice tour of the Hye Society wine club lounge during the video. Since William Chris Vineyards is one of the wine clubs we belong, we had the opportunity to do a tasting or glass of wine on our visit, and we both enjoyed a glass of wine after the visit to the lounge. 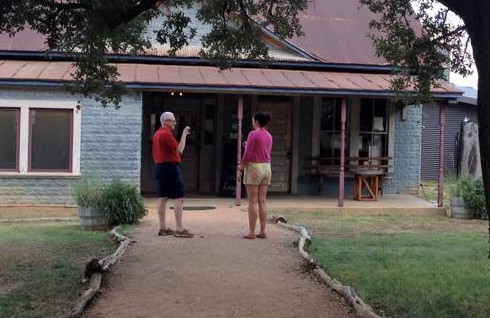 After William Chris, we usually have to stop at Kuhlman Cellars to see our fellow Texas Wine Lover team member Jeremy Wilson. Besides enjoying great wine, we often have to refill our almond jars. This time I also had to drop off a bottle of Driftwood Estate Winery Longhorn Red 2012 to Jeremy so he could do a wine review on, and he did a wonderful review as usual.

Continuing on down the road, we have not had the opportunity to stop at Hilmy Cellars in a while so we stopped by to do a tasting. We were pleased to see that the wines are tasting a lot better recently. Others have mentioned when the winery was opened, the wines were good and then they went into a lull period. We are happy to say they are rising back up to be good again. At Hilmy, we learned it really is a small world. We tasted next to another couple and they were from Houston (connection 1), she had lived in Boca Raton, Florida where I had for 12 years (connection 2), and she even lived where I went to college in upstate New York and was on the Air Force Base where I had a part-time job during college (connection 3).

It was now time for the Messina Hof event on the Friday night. This event was a blending party and attendees would have the opportunity to make their own blend of wine using finished Messina Hof wines. After a nice dinner, the attendees moved to the blending tables where each table was provided a beaker, funnel, and the opportunity to select from a number of wines. I had personally never taken a finished wine and made my own blend, but have heard others who have done so and it does sound like fun. 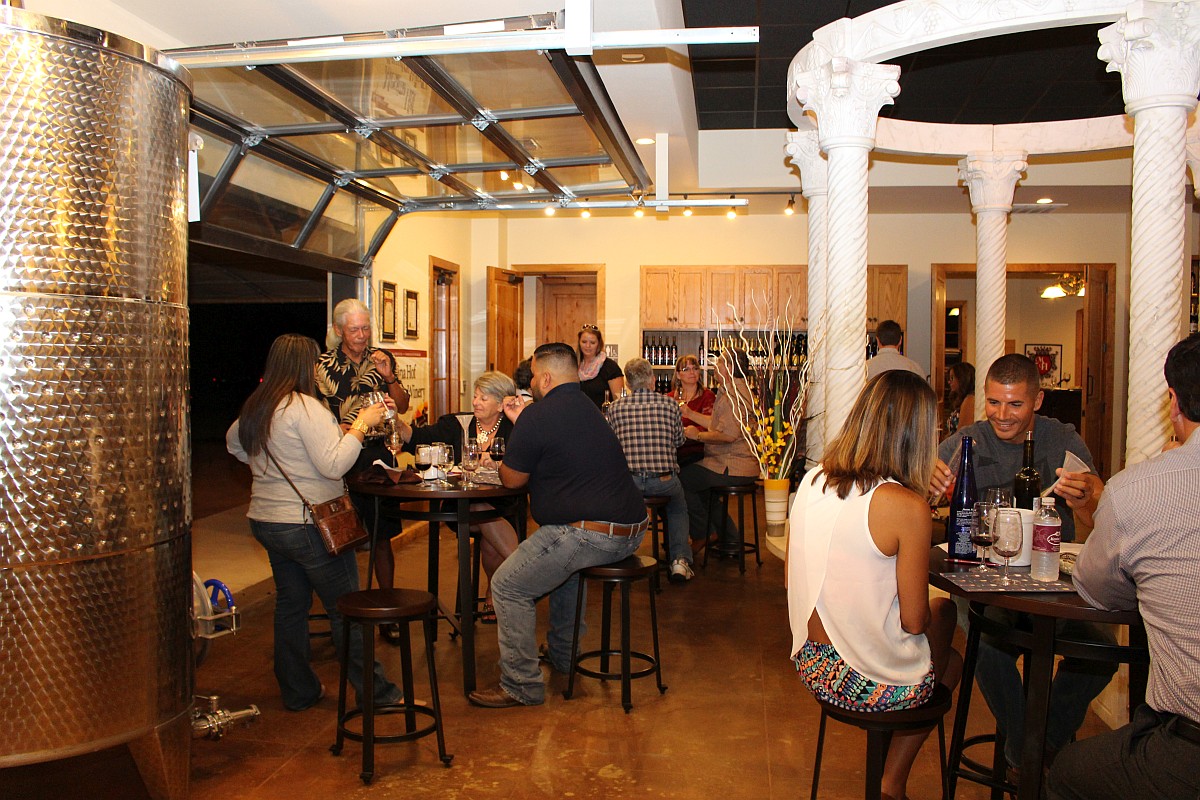 After the blending was done, it was time to judge and the other judges were Laurie Ware and general manager Mike Igo. We retired to an adjacent room and began our judging. We were told the percentages of each blend and it really was a difficult choice, but we came up with a winner. The evening had been a lot of fun and I would recommend attending this kind of event if you see Messina Hof offer it again.

On Saturday, our first visit was to Pontotoc Vineyard on Main Street of Fredericksburg. Carl Money was opening the tasting bar and wanted to show us his new location which will be opening soon. We had not heard about this so we followed Carl and a few doors down from the existing location was where the new tasting room will be. He explained his plans regarding picnic tables outside, the tasting room, movies on the wall, etc. This is definitely going to look nice and we cannot wait to visit to see it completed. While there we were also the first ones to purchase a bottle of his 2014 Estate Tempranillo. 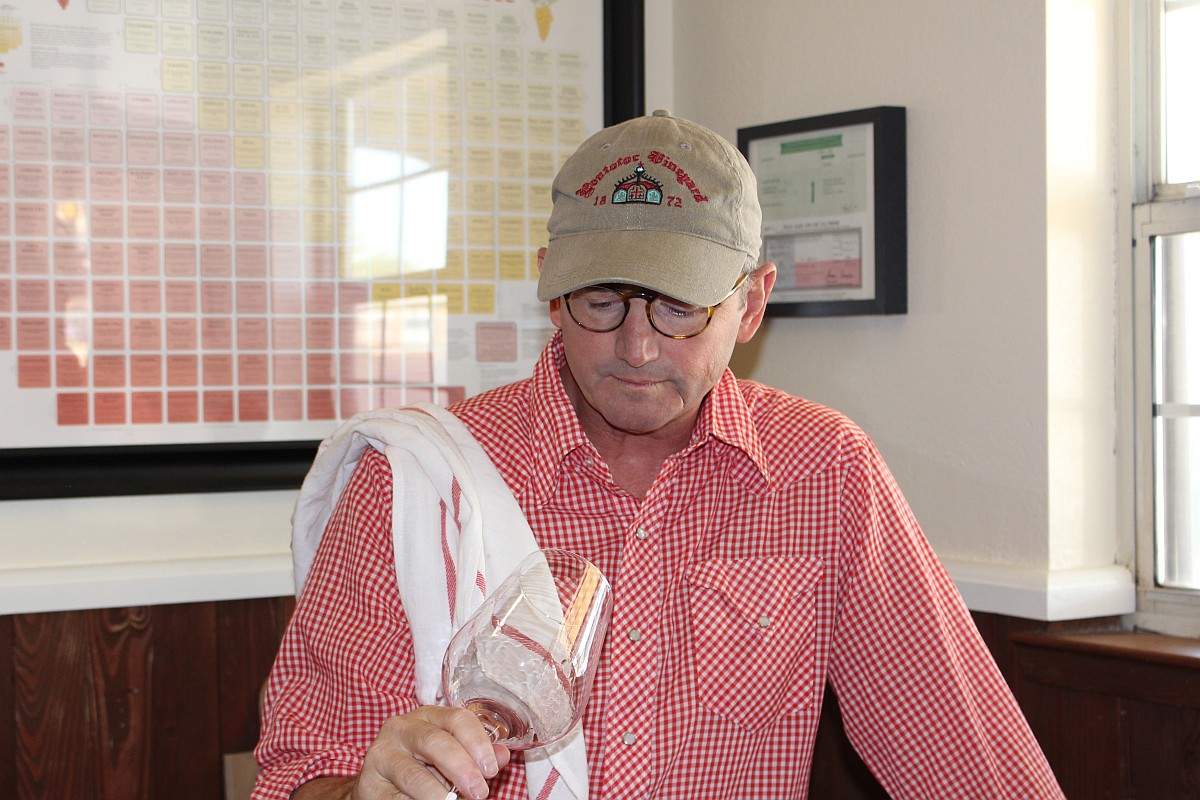 Now it was time to drive to the Hill Country. Unfortunately with the driving distance between the wineries, you cannot fit in as many as you would like as you can on US 290, but it is definitely worth the time to make the drive. The first winery we visited was Westcave Cellars. We always enjoy visiting Allan and Margaret Fetty and this time was no exception. Their new estate Tannat had recently been released and it was good! As a matter of fact, every wine we tried there was very good. Keep watching out for Westcave Cellars as Allan Fetty himself even said that new vintages that will be coming out are just getting better and better. 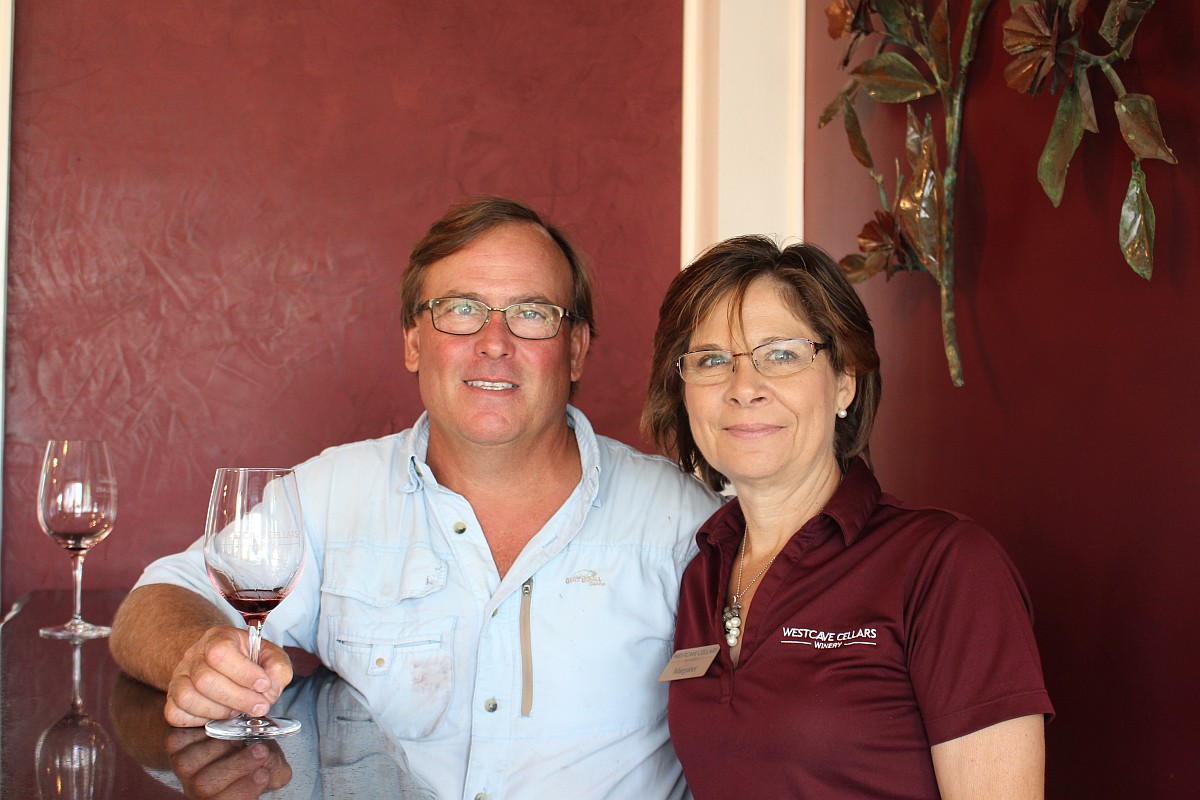 It was time for lunch and Gloria just LOVES Flat Creek Enoteca’s flatbread pizza. Okay, I’ll admit it is just fabulous. We were short on time because of that driving distance and plans for the rest of the day, so we had the brilliant idea of getting the pizza to go. Gloria made the phone call to order the pizza and to my astonishment, she ordered two pizzas! But we did not have a problem enjoying both pizzas during the next hours.

While traveling to Burnet, we had to stop by Perissos Vineyard and Winery. We tried a few wines before deciding on a glass of wine to enjoy. The tasting room had a lot of people so Texas wine lovers are learning it is worth making a trip to the Hill Country.

Next was a visit to the new Torr Na Lochs. I had a tour before the winery’s Grand Opening and couldn’t wait to get back to show Gloria the winery and view, and also taste the wines. Neither one of us was disappointed. I had had the pleasure of meeting Karen DeBerry again and during our tasting, we got to meet Blake DeBerry who gave us a little tour of the production area. Karen remembered she had said no to a photo when I was there before because she wanted Blake in it, so here is a photo of Blake and Karen DeBerry of Torr Na Lochs. 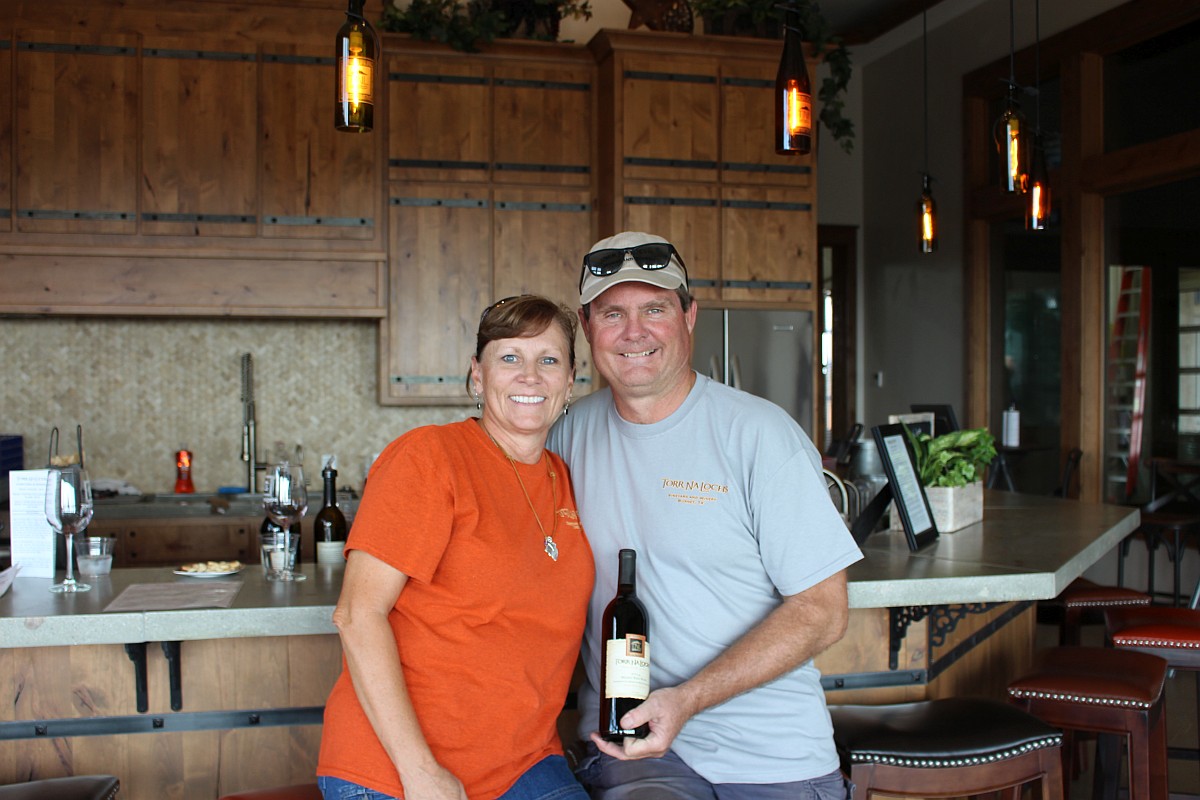 And even more of a treat, here is a drone video of Torr Na Lochs from Keith George of Texas in Pixels. Folks, this is a winery you need to visit!

Heading back for our dinner reservations, we stopped at Hye Meadow Winery where a wedding was in the process of taking place. Because of that, the tasting room was kind of quiet and we enjoyed a glass of wine out on the patio. The weather is always getting better and we cannot wait to sit on some winery patios and enjoy the weather and a nice glass of wine.

It was time for dinner so we went to Compass Rose Cellars just up the road in Hye. We met our dinner companion Karen (KK) Sportsman of the Lazy T B&B and enjoyed the view and meal for the evening. You never know who might show up at Compass Rose and we saw Jason Cook of Hye Market and Hye End Tasting Room again and later Chris Brundrett from William Chris Vineyards came by.

We had a lot of fun with everybody, but it was time to get back to our room for the night to get ready for the next day’s events which included two pickup parties for Lost Draw Cellars and William Chris Vineyards. The original plan was to visit Lost Draw first followed by William Chris on the way home, but we realized during the weekend that William Chris’s pickup party started at noon while Lost Draw’s started at 1:00 p.m. Even though it meant backtracking into Fredericksburg, we would be able to spend more time at both wineries by visiting William Chris first. 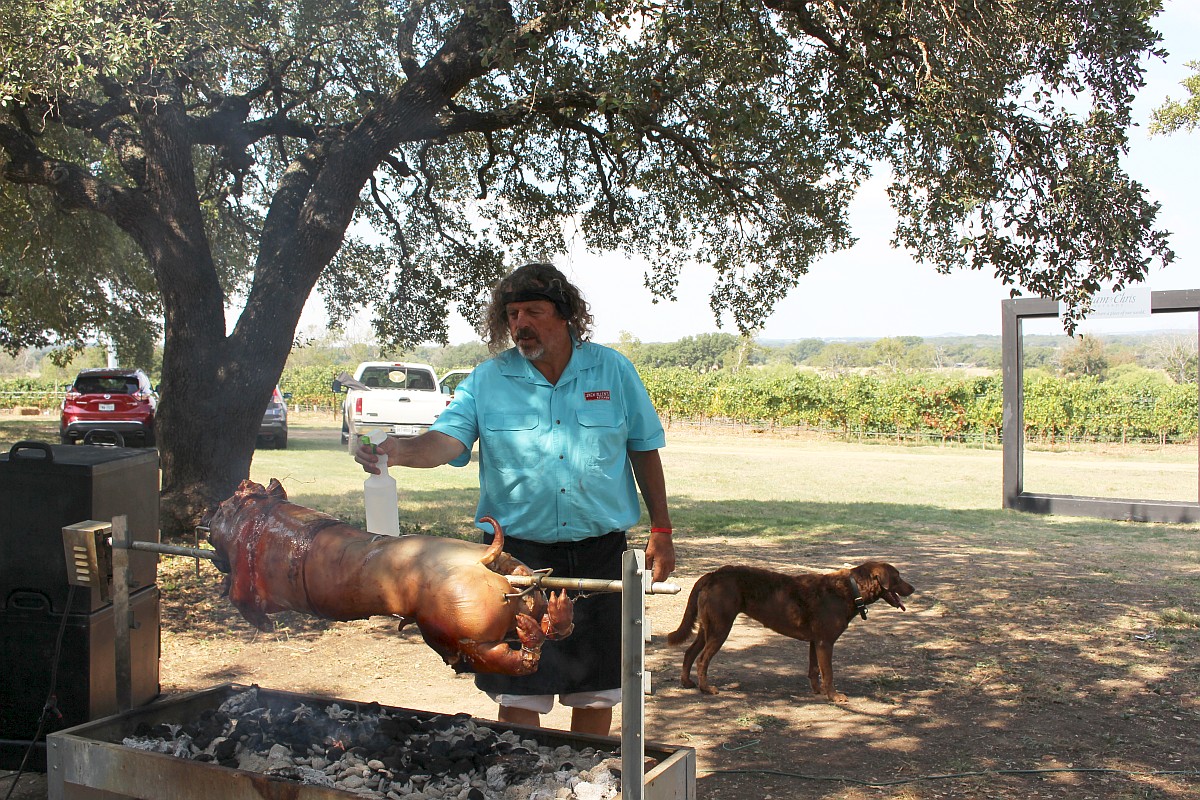 We arrived a little early for the William Chris pickup party where we were handed a checklist of things to do for the event. This made it easy to understand where to go for tastings of white wine, red wine, barrel tastings, etc. Jack Allen of Jack Allen’s Kitchen was even there cooking a whole pig over a charcoal fire. Co-owner and winemaker Chris Brundrett and assistant winemaker Joshua Fritsche were having a taste-off of their new blends and people were allowed to vote for their favorite and also purchase futures of those wines on the ones they preferred. We were fortunate to join Chris, a few women, and Miguel and Barbara Lecuona to do some barrel tastings.

We met other wine friends such as Michael and Robin Clark, contributing writer Robin English-Bircher and husband/photographer Sean Bircher, and new contributing writer Alissa Leenher and her husband Derek. We had hoped to meet other people from the Facebook group Texas Wine Drinkers but we had to leave to go to the Lost Draw Cellars pickup party.

Arriving at Lost Draw Cellars, we met co-owners Troy Ottmers and Andy Timmons, and enjoyed wine that was being poured. Along with wine, wine club members could enjoy some great German food. A live band was playing outside for those who enjoyed sitting outside on the large deck. We met other wine club members like Gloria’s brother and sister-in-law Luis and Patricia Rivas, their future wine club member friends, and other wine friends like Steve and Karen Housewright. The tasting room was bustling and they admitted it had been very busy. 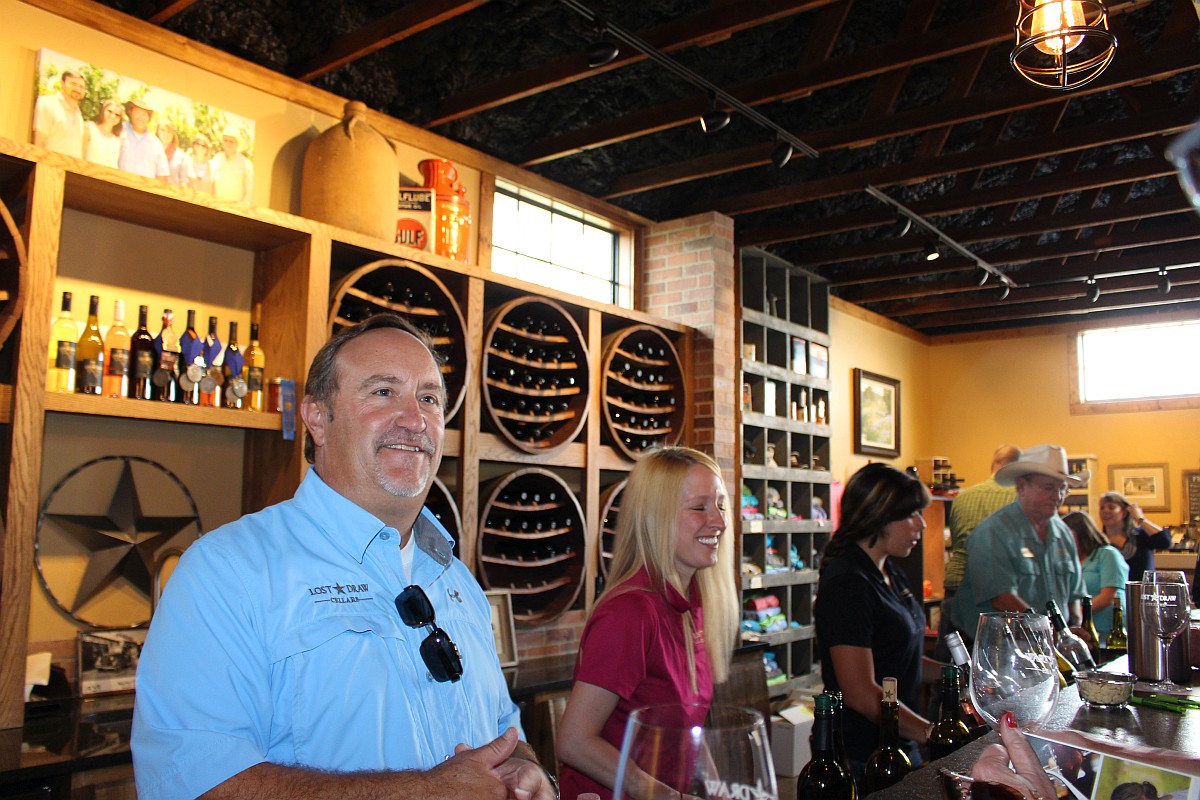 It was now time to make the long trip home. Wine club pickup parties are a lot of fun and we wish we could have enjoyed the entire time during both parties, and especially without having to drive home after them. But we understand that Saturdays are very busy for Hill Country wineries, so having the pickup parties on Sundays make sense. Perhaps more wineries will have their parties on Saturday evenings, which allow wine club members who don’t near live the winery to make the drive and enjoy a nice wine-filled weekend. Even so, it was another great three day weekend in the Hill Country on a road trip.