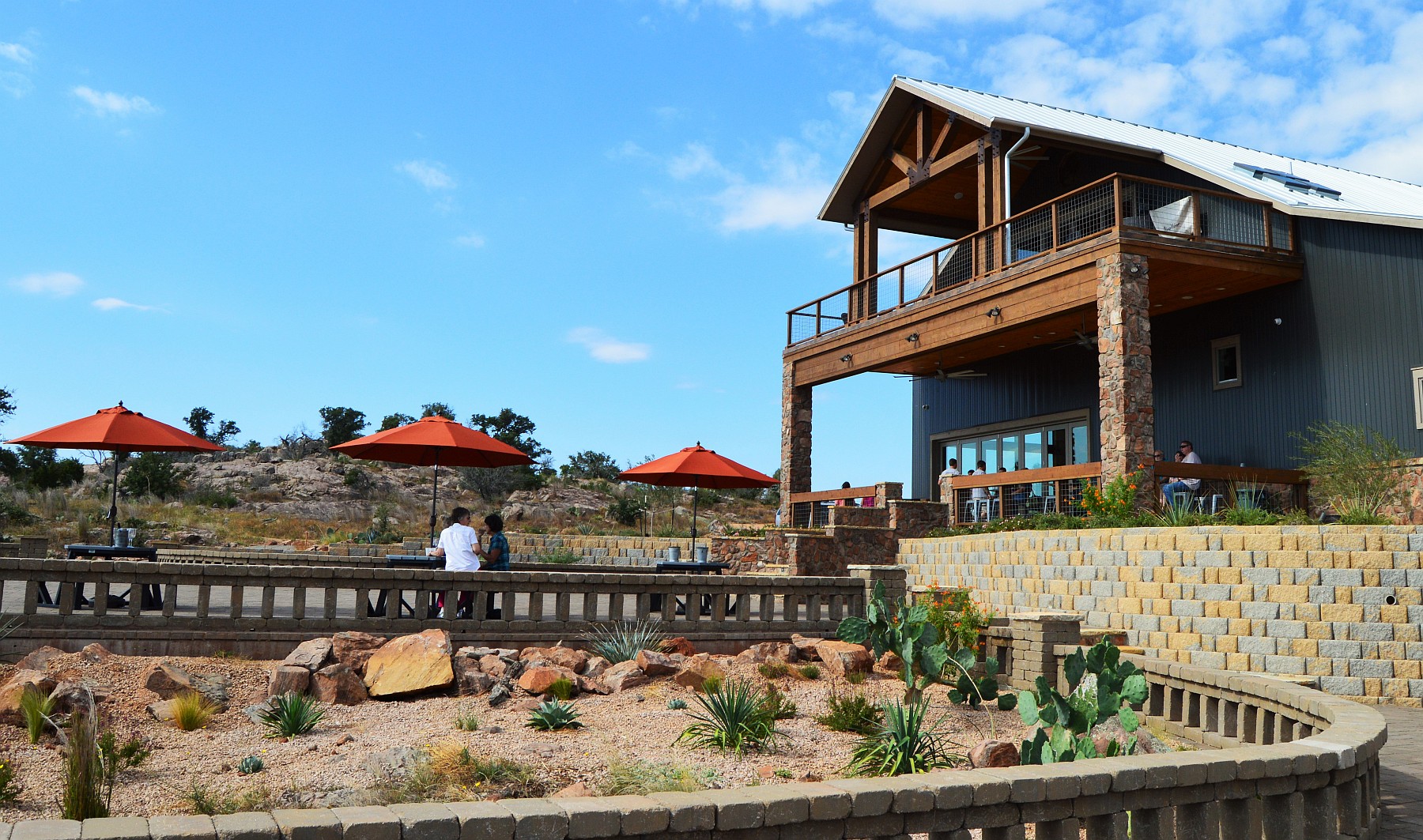 Before the grand opening in September, Torr Na Lochs had a soft opening throughout August and some of July. During that time, vacationers mainly filled the winery’s tasting room. But before the official opening at 1 p.m., locals began to stream in. This support was all thanks to the local paper in Burnet and local businesses, including winery neighbor Persissos Vineyard and Winery. Sean and I joined the crowd later in the afternoon after helping out along Wine Road 290.

By the time we arrived around 3 o’clock, nearly every seat was taken. Every table in the tasting room was full, so we headed to a far spot at the bar to wait for Karen. The entire staff, a handful of pleasant and friendly folks in orange shirts, welcomed us and asked if we needed anything. Despite the bustling tasting room, nearly every member of the staff offered us help. Even in the busy crowd, where it seemed hard to tell who was who, I felt welcome.

Once Karen had a few moments, she took us through a tasting of the nine wines currently available. All of the wines come from 100% Texas fruit, made by a winemaker from the Texas Hill Country and another in the High Plains. Normally, a tasting consists of six pours: all three whites and the Rosé di Montepulciano, as well as two choices from the five available reds. In June when Jeff Cope visited, there were six wines available: three whites, the Rosé, the Sangiovese, and one of the two red blends, Fion Dearg. When he visited, the other three reds had not been in the bottle long; they needed some time. Thankfully for me, these three new wines were available: 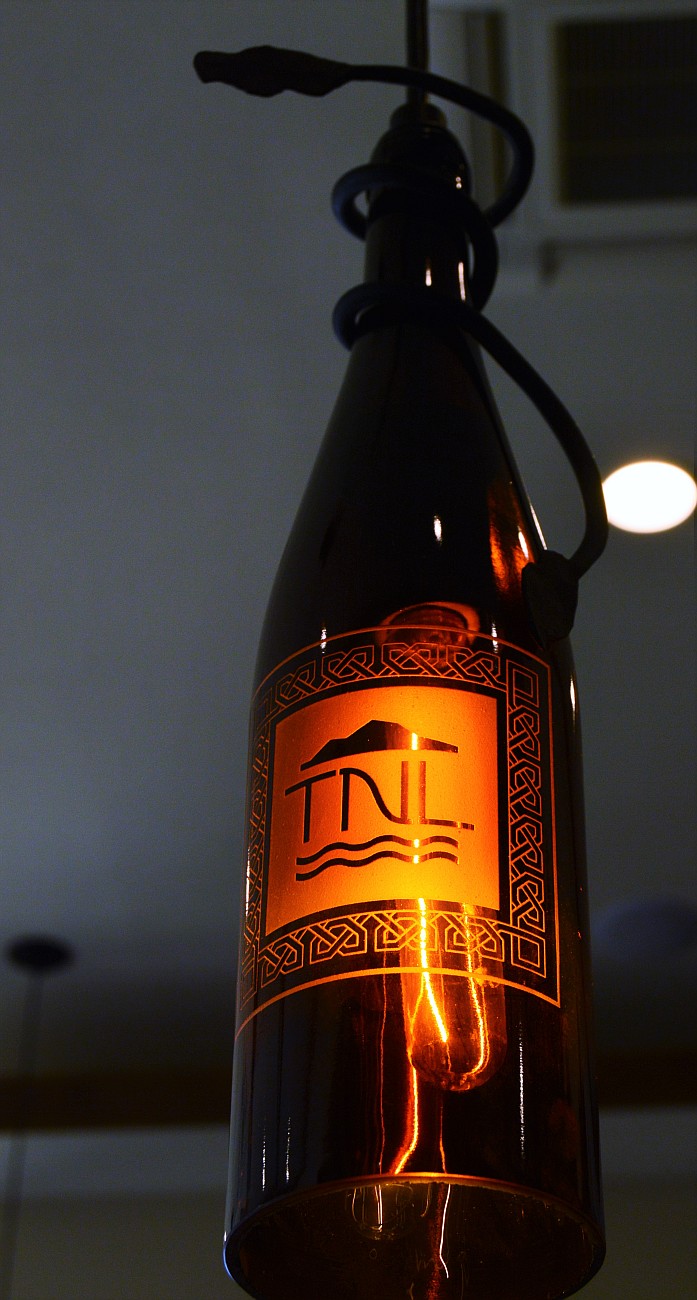 Along with tasting wines, we learned all about the naming of the blends. Two of the current blends actually match the winery. The first two released blends, Fion Dearg and Fion Gael, are Gaelic like the winery’s name, each meaning red wine and white wine respectively. MADS is a different story. At first glance, it seems as if the name comes from the grape blend; however, it has a more personal meaning. The wine is named after one of their grandsons. Karen mentioned that, in the future, they may need to name some of their other wines after some of their other grandchildren.

Near the end of our tasting, at this time well after 4:00, much of the crowd had moved on. That gave Karen the opportunity to sit down and talk for a bit. The first thing we learned about was the vineyard. They quarried a lot of rock from it, which ended up as part of the winery building, and led to their philosophy of “Rocks to Wine.” Karen also shared their story, and we started talking about the future.

Right now, there really aren’t any planned events, but there are a few possible ideas. One would be a once a month sunset viewing. This Saturday event would be a special ticket and include wine and food out on the winery’s deck and spacious patio. Considering the view of the neighboring hills and lakes, the sunset should be breathtaking. In addition, they hope to hold wine dinners. The space in the barrel room would provide a great venue. A large group did a tasting in the room earlier in the day, seating around 10, so with an additional table, the room can comfortably seat 16.

During our visit, a number of people asked about the wine club. Unfortunately, the winery decided to not offer one at this time. Though there is plenty of great wine, the winery wanted to have more estate wines in the club. After this year’s harvest, they hope to have some for 2016, leading the way to a wine club early next year.

And those future estate wines were waiting in tanks for the barrels to arrive. As we toured the winery, we saw three of the four tanks filled with estate fruit. Though the vineyard was only on second leaf, they still had a plentiful harvest of over six tons. The Syrah and Malbec produced most of the tonnage. The Petite Sirah, however, did not fare so well; the area struggled in the rocky soil. Despite the tough year on these specific vines, they still produced a good amount of fruit. We also learned that they will get some Muscat from the High Plains that they hope to turn into a dry wine, rather than the more common sweet one the grape is known for.

We ended our visit with a tour of the grounds. First up was the bottle of wine just before the patio. The wine comes from one of Karen and Blake’s favorite Australian wineries. Before they moved back to Texas, they made a visit to the winery. During their stay, they noticed that much of the landscape and vineyards reminded them of someplace else, their property in the Texas Hill Country. It was then that they thought about using their land – originally purchased for a ranch – to build a vineyard and winery. The bottle is set in place to commemorate that inspiration. 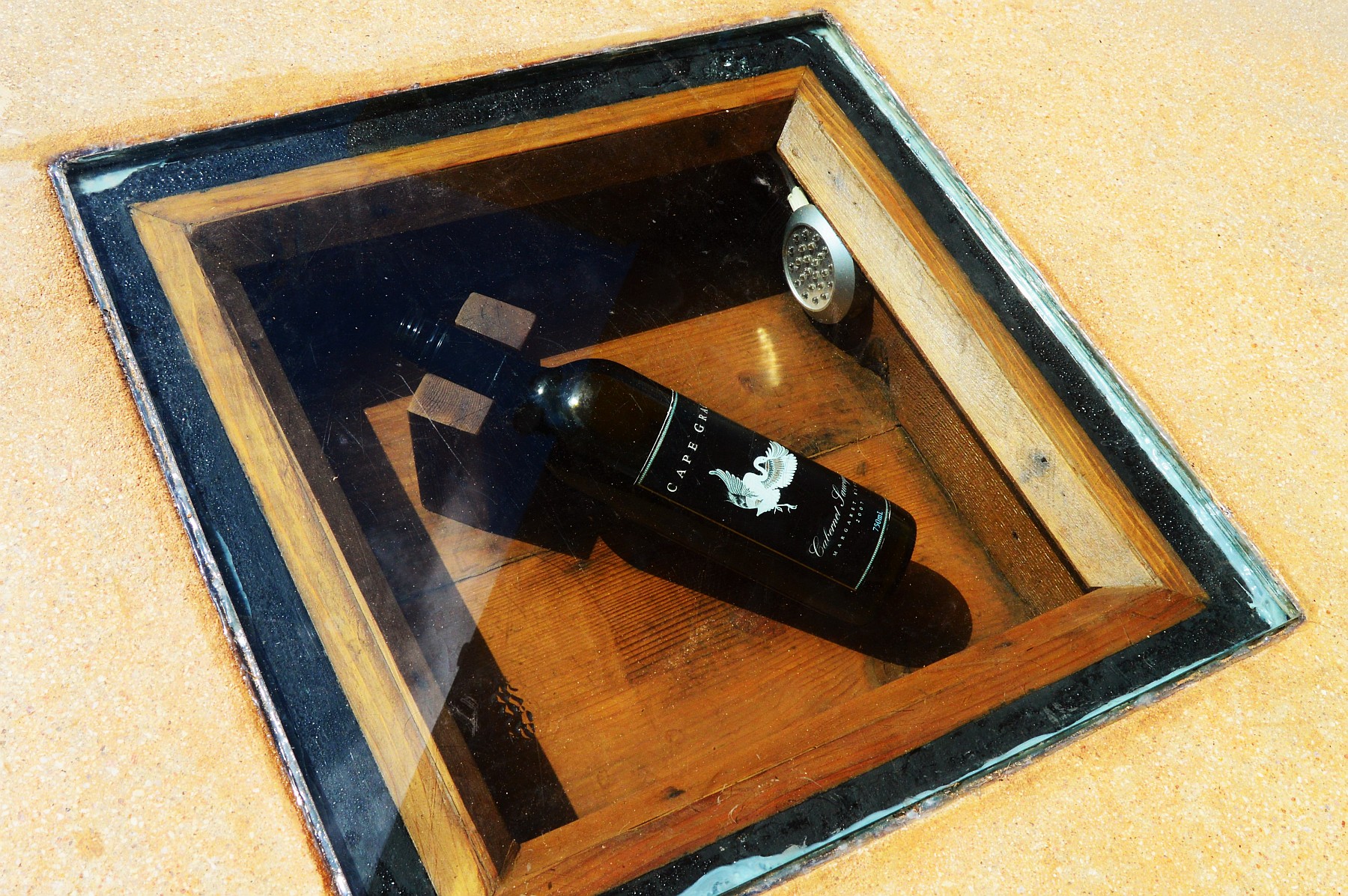 One of the most obvious features, beside the vineyard and beautiful winery, is the impressive 50,000 gallon rain collection tank. This massive structure got finished just before the extensive summer rains; by early June, it held nearly 40,000 gallons. That water, and other recent rains, goes through a number of filtrations, as well as reverse osmosis, to make sure the water meets the winery’s high standards. This is especially true for all of the tap water, which goes through additional filtrations. Not only is rain water collected, but so does condensation, which is used to water the few drought resistance plants found in the winery’s xeriscaping. The choice to xeriscape relates to the desire to conserve water, but it also fits in well with the beautiful rock formations that surround the winery. 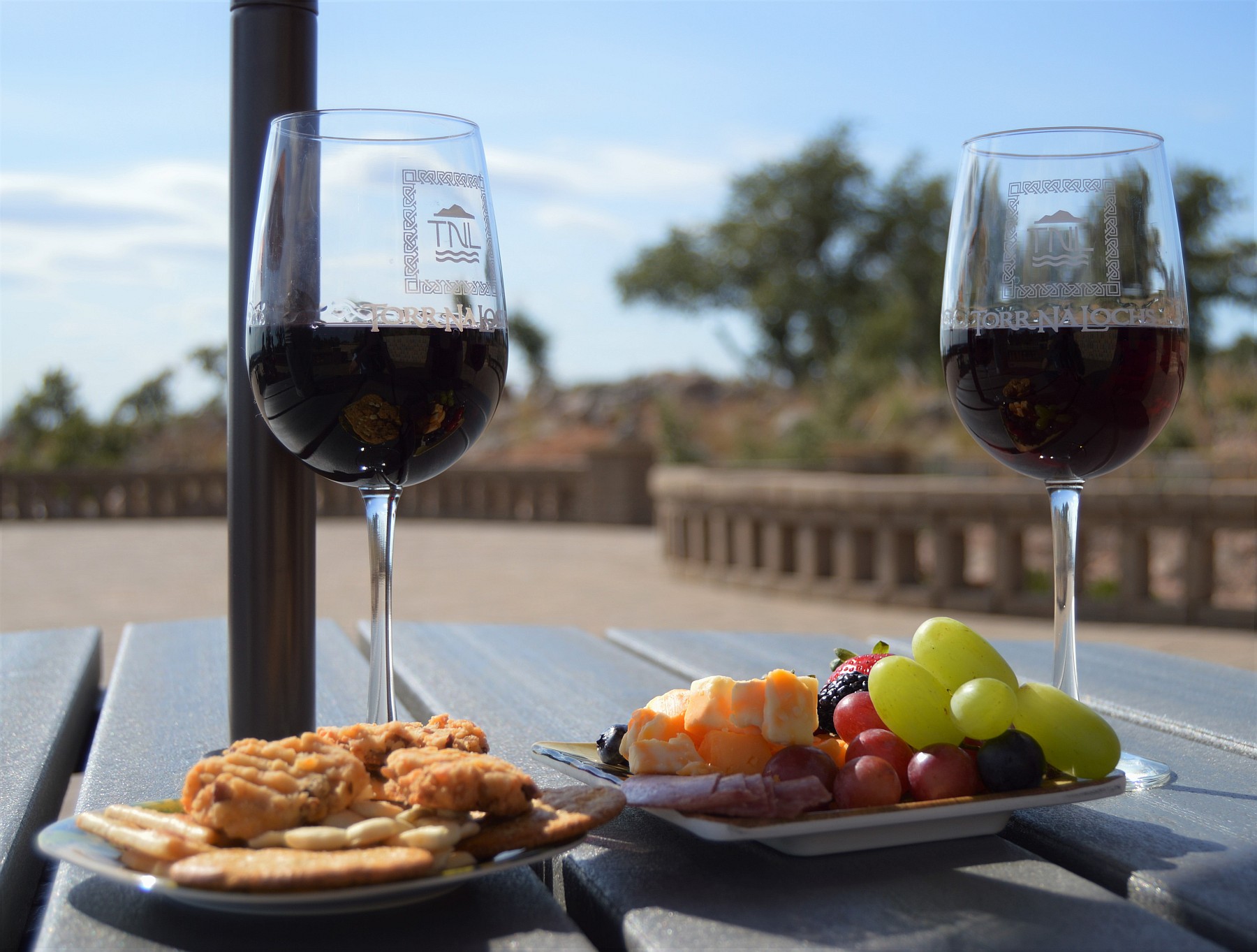 We could not resist the chance to relax and enjoy the setting. So we purchased a cheese plate (they also offer a seasonal plate) and brought out some sandwiches we packed. We paired the food with a couple of glasses of wine and sat on the patio basking in the view. And for a short while, that view included a few of the grounds’ donkeys enjoying some shade. The bright blue sky stretched out over the winery and towards the lakes, providing the perfect backdrop to end our day. 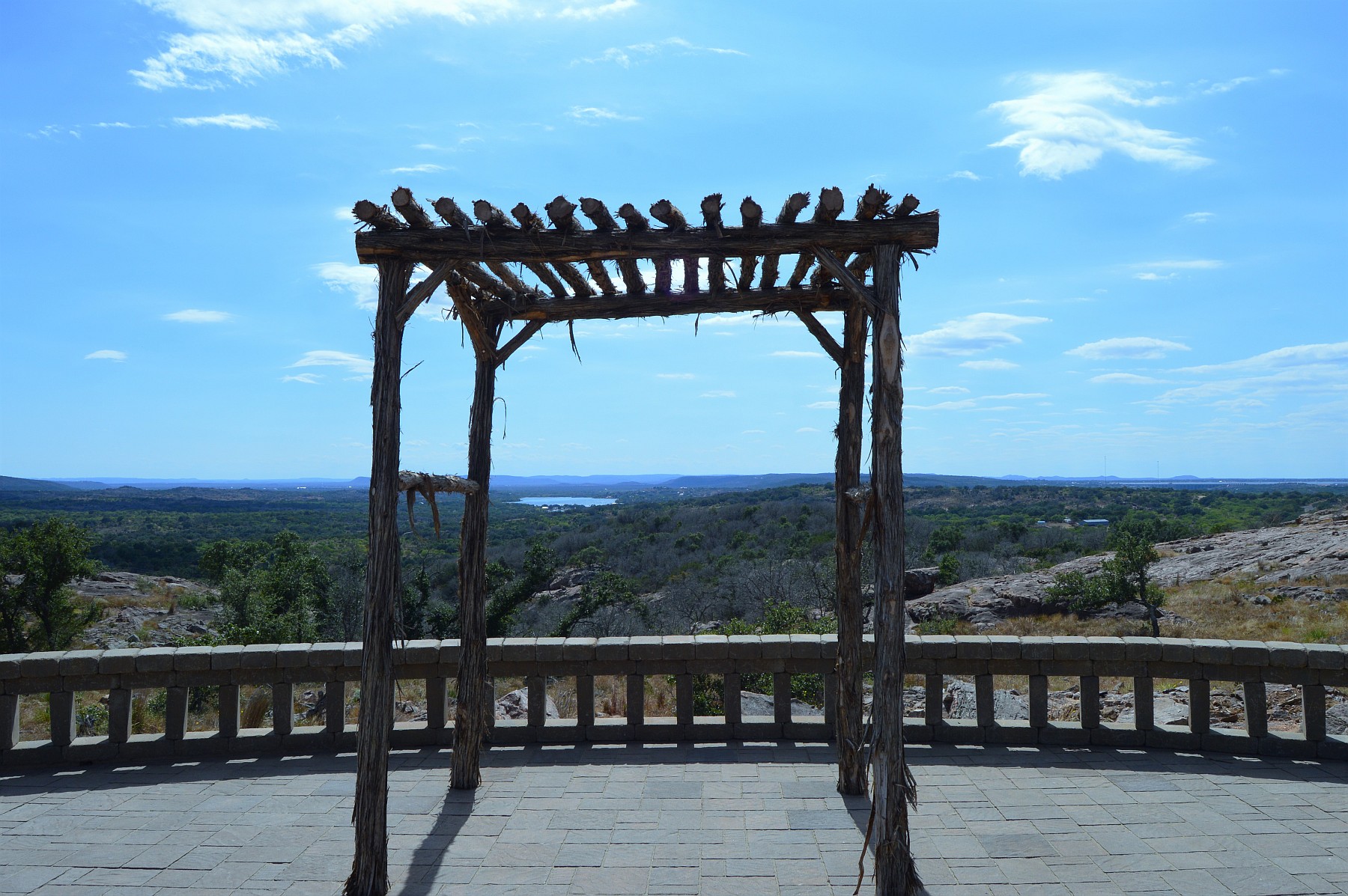 There are a number of reasons for making Torr Na Lochs a spot to visit. There are a number of interesting stories waiting to be told, like the origin of the one-of-a-kind foosball table and the beautifully painted logo on the production facility floor. The outside deck and patio provide an incredible view of the Highland Lakes and beautiful rock formations. And once the weather cools and the large windows in the tasting room can be opened up, this view, like the wine, will be enjoyed from every spot.