I attended the seminar at TEXSOM on Carignan which is a grape that is fairly rare among the world. The seminar I attended was a varietal focus panel discussion on Carignan which was moderated by Greg Harrington MS with panelists Larry O’Brien MS, W. Scott Harper MS CWE, Dilek Caner MW, and Guy Stout MS CWE. 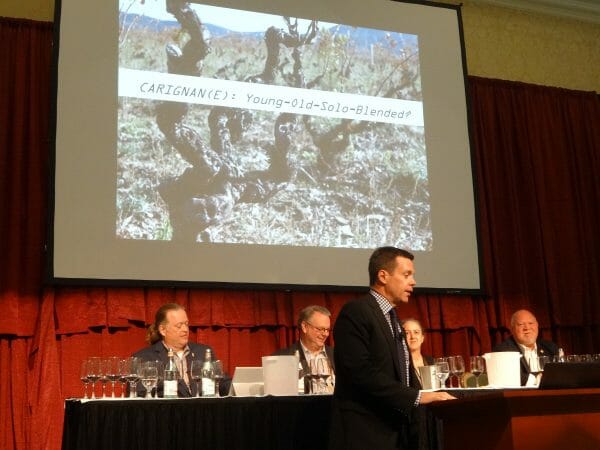 Carignan is a red Spanish/French wine grape variety planted throughout the western Mediterranean and other areas around the world including Texas. It is a heat-loving red grape, which makes it perfect for Texas. If Carignan is not the varietal, then it is often used in a blend. Carignan is usually known as high in acid and color, with tannins which can be rough and occasionally bitter. It is not an easy grape for use in a lot of new oak. It is common to see Carignan use carbonic maceration in order to soften it.

Carignan is known as a number of names around the world:

As Larry O’Brien stated, “Carignan is one of those grapes that people forgot and it just doesn’t get its just due.” 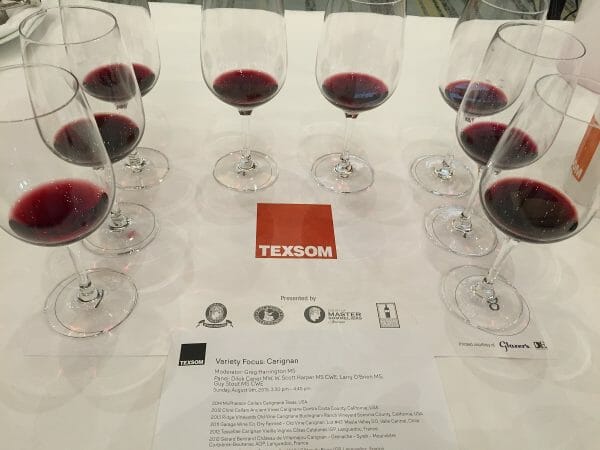 We were fortunate to have eight wines which were all Carignan or with Carignan as a dominated blend. These were the wines we got to taste:

It was a great experience tasting the wines, especially with the McPherson Cellars Carignane being the first wine tasted and owner/winemaker Kim McPherson in the audience answering questions the Masters had about the wine. It was nice to hear even though it was one of the lighter wines being offered to taste, comments coming back from the Masters were they could see this wine being tasted well in a food pairing.

Carignan was a popular grape widely planted in the south of France primarily because of its high yield. New plantings of the grape are getting rarer as different grapes are planted such as Syrah, Grenache, Mourvèdre, and Cinsault. It is a late budding and late ripening grape which is great for a Mediterranean climate, but makes it unsuitable for damper, maritime climates. Carignan is also prone to powdery mildew and attack from grape moths. The grape bunches tend to cling firmly to the vine making it less suitable for machine harvesting. But the vineyards that have Carignan, especially very old vines, produce some of the best Carignan.

As mentioned, McPherson Cellars produces a Carignane wine in addition to some other Texas wineries. Some of the growers in Texas who are growing Carignane are: Bingham Family Vineyards, Brushy Creek Vineyards, Buena Suerte Vineyards, Kuhlman Cellars, La Pradera Vineyard, and Martin’s Vineyards.

Carignan might be a rare grape being grown and made into a wine, but it is a grape which should be noticed.