I received a sample of a WineCradle for review. A WineCradle is an inflatable and reusable way to carry bottles safely whether it be for wine, beer, or spirits. I have reviewed BottleBully before which claims to offer the same kind of protection for your bottles while traveling, so I was eager to review a WineCradle.

I have friends and family who have traveled for many years between countries carrying wine bottles in their checked-in luggage and all they ever do is wrap it in clothing. They claim to have never had a problem with that method but I am just a little skeptical and want to be sure any bottles I am carrying is going to arrive safely. 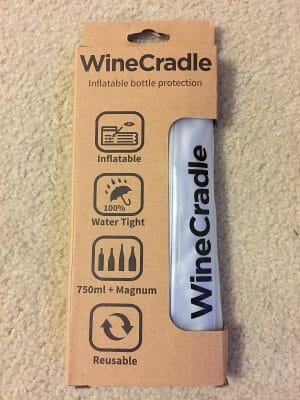 The first thing I observed about the WineCradle is its compact size when folded up. This makes it ideal to throw in your suitcase just in case and not take up much room. If you happen to end up with a bottle or two of wine to bring home, it seemed easy enough to inflate the WineCradle and safely transport it home.

The WineCradle stores wine bottles of 750ml size but it also claims to work with 1 liter liquor bottles and even magnum bottles (1,500ml).

Unfolding the WineCradle provides its full size and the next step besides reading on the carrier itself, is to figure out how to use it. No paper instructions are given so it is supposed to be readily apparent how to use the WineCradle.

Like most inflatable objects, you need to blow into an air tube to inflate the air chambers around the carrier. The good thing about the inflation tube is, it is the type that seals itself after you blow into it keeping your air effort from deflating when you let go. The bad thing is I really had to blow hard! I finally got the trick where I had to pinch the air tube open in order to let me blow into it, and then letting go of the pinch pretty much prevented the deflation. 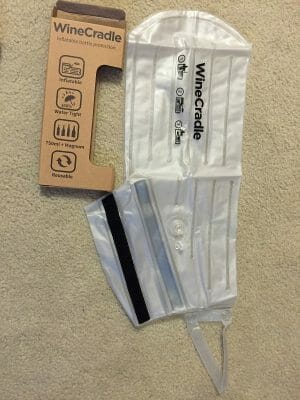 Now it was time for a test. I had purposely used an inexpensive bottle of wine, a homemade Malbec I made last year (okay, no comments). I intended on dropping the carrier on some different areas of flooring to simulate the bouncing around in a suitcase. I first dropped it from about two feet high on the couch. Not a problem.

I then was ready to drop it on a carpeted area from about three feet and that’s when I noticed the air chambers on the side of the WineCradle seemed to be smaller then when I first inflated it. I did a lot of squeezing to see if I could find a hole and sure enough, I eventually found a slight hole at the bottom of the WineCradle with air escaping. So much for the safety protection of the WineCradle. Every inflatable device can easily get a pinhole for air to escape and unfortunately the WineCradle had the same problem.

I loved the way the WineCradle could still be deflated and folded up for carrying, but if it cannot hold its protection, it would not make me feel safe carrying an expensive bottle of wine in my suitcase. At this moment, it seems like my friends and family with their wrapping of wine bottles in clothing seems to be the best method for checked-in luggage.