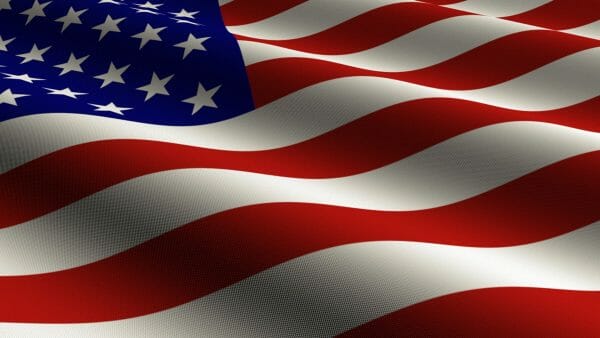 Not all road trips are planned and the morning of July 4th came and we had planned on just working on errands around the house. Hmm, work on errands or visit some wineries? That didn’t take long to convince us what to do!

Since we didn’t want to travel far, we decided to do a one day road trip on Independence Day to the Texas Independence Wine Trail near the I-10/Weimar area. We were there last November so it had been a while since we had been in that area. Now the question was out of the nine wineries on the trail, which ones would be open on July 4th and who could we visit in one day? We had not yet visited San Ducerro Vineyards, so that was an easy choice and we planned the rest of our day around that area. Near San Ducerro Vineyards is Darcy’s Vineyard, and since we had yet to meet owner Darcy Warren, a quick email was sent to see if they were open as they did not mention anything on their Facebook page or website. I got a quick reply back that they were indeed going to be open. I learned later I should have also asked if she was going to be there.

Anyway, we were off heading to Weimar and decided our first stop would be Whistling Duck Vineyards & Winery. It didn’t hurt that for July 4th they would be serving hot dogs at 1:00 p.m. But the folks there are always fun people and our first stop was not a disappointment. We decided instead of doing a tasting, to just get a glass of wine and enjoy the pleasure of the back porch overlooking the vineyard. The front porch was having live music but the back porch was peaceful and we struck up a conversation with another couple who said they enjoyed visiting the winery and the back porch peacefulness. 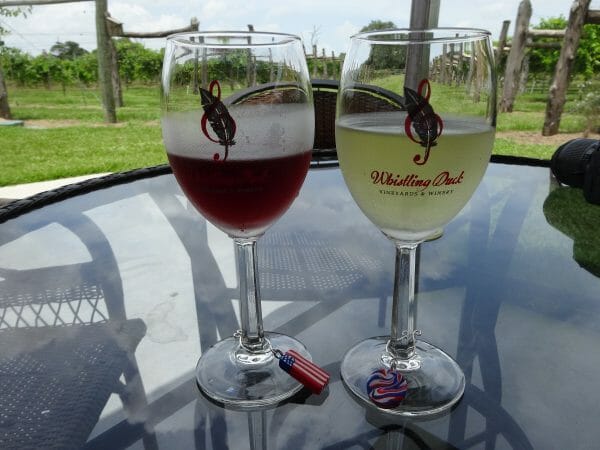 Hot dog time came and we enjoyed a light lunch which was plenty for us. During our visit, we saw co-owners John and Kari Cooke, and I had to ask about the new building which was being built since our last visit. John said it was going to be the production and storage area along with another covered seating area. It sounds like a lot of people are stopping by to visit Whistling Duck.

Time was getting short, so we headed down the road. One unfortunate thing about the wine trail is the wineries are not all near each other, so if you can fit in three wineries in one day, you’re doing well, especially since most do not open until noon.

We arrived at Darcy’s Vineyard and from the road, not much had changed since last time. There had been a brief shower on our way from Whistling Duck to Darcy’s Vineyard, but the large mud hole at the entrance to the field’s road could not have been caused by the rain. If we had taken our car, we would have opted to head to the next winery and in the end, we should have. But we maneuvered around the pot hole and followed the ruts in the field. We had to make our own road at one point since the corner was another mud hole with orange cones. When we parked on the unmowed lawn, we noticed that a wood porch had been built around the winery and it had collected a number of different objects. 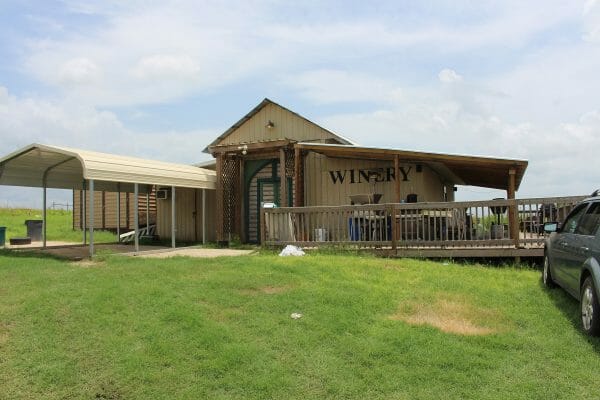 We then learned after entering the winery that Darcy wasn’t there. Always being supportive to wineries, I opted for a tasting of their new wines. Since our last visit, they had switched from plastic glasses to real wine glasses, so that was nice to see. I shared my tasting with Gloria when she was interested in trying a particular wine. I could have had a total of 8 wines of wines to taste and keep the glass, but decided to only taste 4 wines as the selection did not appeal to us even though they appeared to be all made from some kind of Texas grapes or fruit. Some of the wines were made from their estate vineyard next to the winery, but the wines like Blackberry Jalapeno didn’t entice me.

Another couple arrived and started a tasting on the other side of the bar. That allowed us to say thank you to the tasting guide, pay for our tasting, and depart the winery. I am sure that Darcy is very nice and perhaps meeting her would have changed our experience, but it will be a while until we make the trip through the field again.

Next was San Ducerro Vineyards and arriving at the winery next to the vineyard was the difference between night and day. A neat metal building welcomed us and we enjoyed our visit with Joyce and Keith Foster along with their daughter Rachel. A tasting of their wines was enjoyable and they did not rush us through each tasting, but let us savor them and enjoy our stay. We can see bringing our own steak for them to cook on their next Grillin’ and Chillin’ Steak Night. 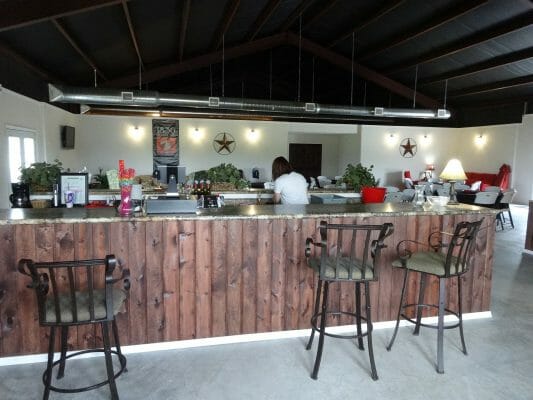 Off to the last winery we could fit in for the day and we were soon at Majek Vineyard & Winery. Owners Randy and Lynne Majek said they had been following our travels on Facebook and surmised that we might be coming to their winery last. What can we say? One thing that Majek does well is interface with customers and wine lovers on social media. Their friendly personality just makes you want to visit the winery.

We sat down at a table, and after reading Jeremy Wilson’s raving review of their Sparkling Blanc du Bois, we thought a bottle would be very refreshing to enjoy on a hot day to end the 4th of July. We were not disappointed. After the final customers had left besides us, Randy and Lynne joined us at the table and we had a delightful conversation. They might have had live music that afternoon, but they did not want to interfere with the nearby 4th of July Schulenburg picnic which was happening. 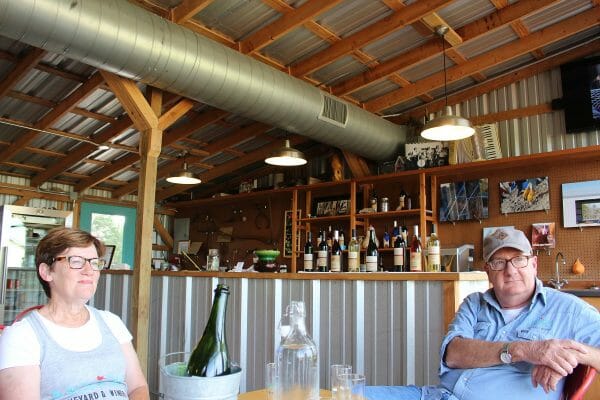 Majek Vineyard & Winery was one of the wineries who attended our Discover Wine Festival, and it was great to hear that not even two weeks after the festival, they had already received visitors at the winery who had attended the festival. That made us feel good that we had indeed been able to introduce Texas wines to the Houston public.

It was already past closing time and we did not want to hold up the Majeks any longer, so we made our trek home. Once again, it had been a nice trip to the Texas Independence Wine Trail and we will have to include the other wineries next time we unexpectedly make a one day road trip.