I am sitting here writing this on a weekend when we’re at home. We thought the same thing was going to happen last weekend, but as we often learn, things don’t always go as planned. I received an email the Thursday before that Bending Branch Winery was going to have a special event on the following Saturday featuring three wines with fruit from Newsom Vineyards. One of those wines was the 2012 Malbec, which I was fortunate to get a sample of from the barrel back in November of 2013 during a tour, and I wanted a bottle then! A bonus was the attendance of Neal and Janice Newsom of Newsom Vineyards. So, our planned weekend at home turned into planning on what else we wanted to do that weekend besides visiting Bending Branch on our impromptu road trip.

We knew when the event was happening at Bending Branch so that part was easy. The hard part was finding a place to stay that Saturday night! Something must have been happening in Fredericksburg that night because almost all the hotel rooms were already booked. We eventually settled on a hotel we had stayed at before for a LOT more than usual. We need to make good friends with someone who lives near Fredericksburg and has a guest room! 🙂

Saturday morning came and we left at 7 a.m. and our first planned stop was Singing Water Vineyards in Comfort, near to Bending Branch. It had been a couple years since we had last visited, so our visit was overdue. We arrived soon after they opened and started a tasting. Lauren Conklin, Marketing Manager, was present and we had a chance to meet her since we unfortunately could not make it there to visit Memorial Day weekend with our group of friends.

Lauren showed us around the winery and the creek behind the winery, which usually is empty. But of course with the rains this year, there was a nice flow of water in the creek and that made it nice for one to sit in the back deck or tree house. We had the pleasure to speak with co-owner Dick Holmberg and his daughter Ann for a while and had a wonderful conversation learning about the vineyard, winery, and other things. Let’s just say it won’t be the last time we hear from Dick and Ann this year on the website.

Here are some of the wines available:

If you are not familiar with the wine Freedom, it is a wine that is dedicated to all those who have sacrificed to keep our country free. A portion of the proceeds from the sale of Freedom go to the Fisher House Foundation which funds college scholarships for children of active duty, retired, and deceased military personnel. 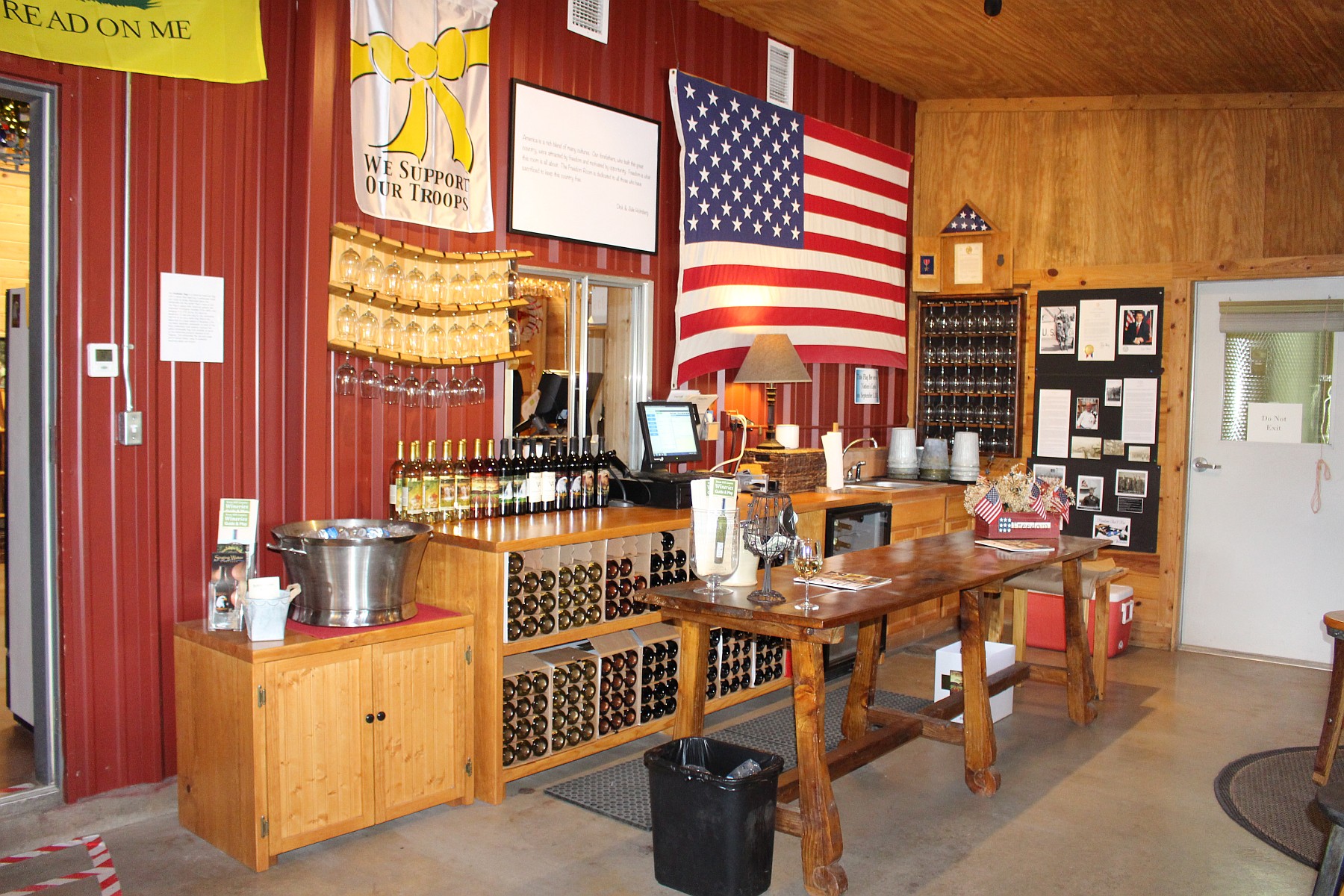 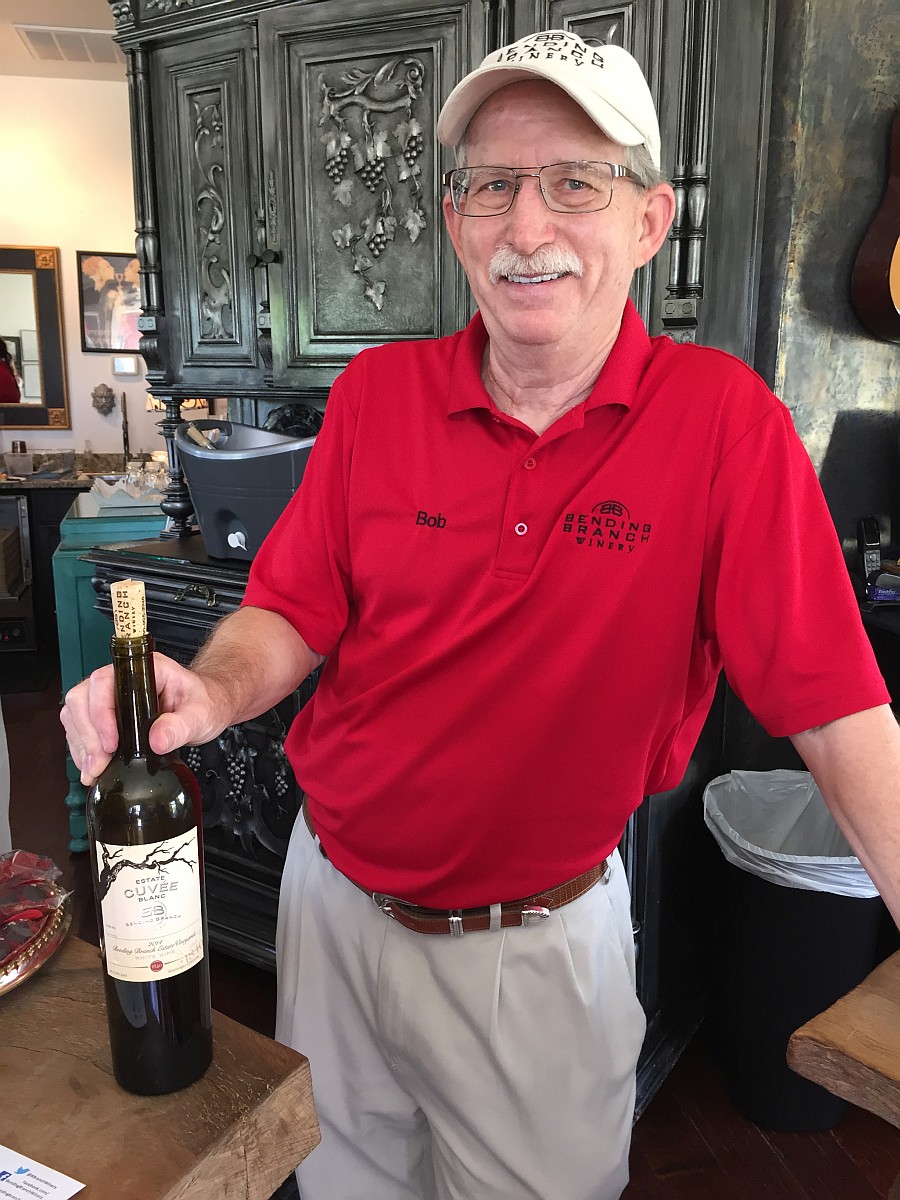 It was time to go to the nearby Bending Branch Winery. When we arrived, there were already people present enjoying wine on the patios and in the tasting room. The Newsoms were not scheduled to arrive until 2 p.m. so we knew we had time to see what new wines Bending Branch Winery had since our last visit. We started a tasting and then Jennifer McInnis, Director of Marketing and Sales, took over our tasting. Soon to arrive was Dr. Bob Young who we last spoke to when Bending Branch Winery was the third favorite Tempranillo in the Battle of the Texas Tempranillos, and before that when we did the podcast with him and co-owner John Rivenburgh on the new Flash Détente unit.

These are some of the wines we tasted in the tasting room:

The Viognier is a first time wine for Bending Branch and it was fermented in the barrel. This Viognier had a different flavor profile than other Viogniers in Texas, but then again, Viognier is one of those wines where it is not common to find two that taste the same. The Cuvée Blanc was another very pleasant blend. We also talked about Ursa, the California winery that Bending Branch purchased in the Sierra Foothills. They will be offering those wines now under that label.

During our tasting, we met co-owner John Rivenburgh again who is always fun to talk to. And then the door opened and a tall Texan with his lovely bride walked in: Neal and Janice Newsom. They said hello to everybody and also sampled some of the newer wines. It was time for the 2 p.m. appearance of the Newsoms for the wines made from their vineyard, and those wines were being served on the outside patio. I was afraid it was going to be uncomfortable on a hot day, but the trees and breeze helped to keep things cool. 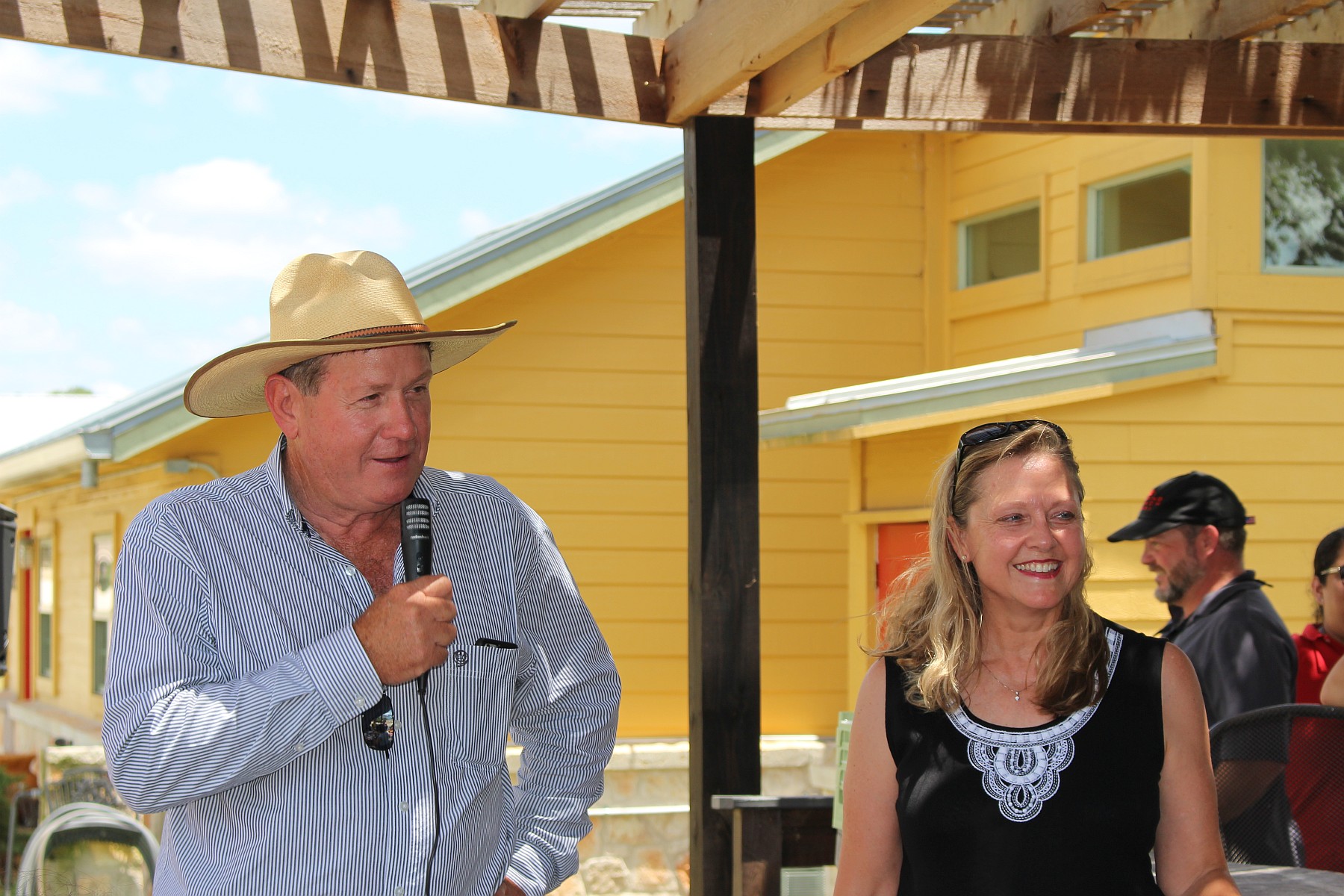 The Newsoms invited us to join them at their table and we enjoyed a tasting of the three wines:

It had been a great tasting of new wines from the Newsom Vineyard in addition to the other Bending Branch Winery wines. We had planned on attending the Wine Road 290’s Chili and Chilin’ event which was happening that day, but we fortunately heard that the chili was already gone at most of the wineries, including the one winery we were planning on heading to next. But since our hotel was in Fredericksburg, we had to say goodbye to everyone and make our trek up to Fredericksburg.

After we checked into our hotel, we decided to go to nearby Lost Draw Cellars where we always have fun. Tending the tasting room was the usual crew including co-owner Troy Ottmers. They also said the chili event had been extremely busy that morning, so I guess Texans don’t mind eating chili in the middle of the summer. We had some tastings of a couple new wines and some previously released ones, which may have gotten better with age.

We were told co-owner Andrew Sides and General Manager Matt White were in Llano (pronounced with the L instead of a Y like in Llano Estacado Winery) doing tastings at a wine bar. Since we weren’t really ready to eat dinner and the wineries were closing, we pulled another impromptu move and headed to Llano, almost a 45-minute drive. Yeah, we’re crazy. We found the wine bar they were in (there is more than one!) but they were just packing up and ready to head home. We chatted for a bit and headed back to Fredericksburg. We would have stayed and eaten dinner in Llano, but since we almost hit a deer who decided to stand in the middle of the road on the way to Llano, we decided to make the drive back in the daylight.

After a nice dinner at a German restaurant and a very long walk along the now dark and mostly quiet sidewalks of Fredericksburg, from one end of town to the next, it was time to call it a night. Our Sunday plan was simply to visit a couple wineries for a short stop and then get home early because Gloria doesn’t like arriving home late on a Sunday. It didn’t work out that way. So much for plans!

Our first stop was at Kuhlman Cellars where we were to meet fellow Texas Wine Lover member Jeremy Wilson to make a trade for things and to finally get a photo of the current Texas Wine Lover team in front of those famous barrels we always see posted on Facebook. Mission accomplished! 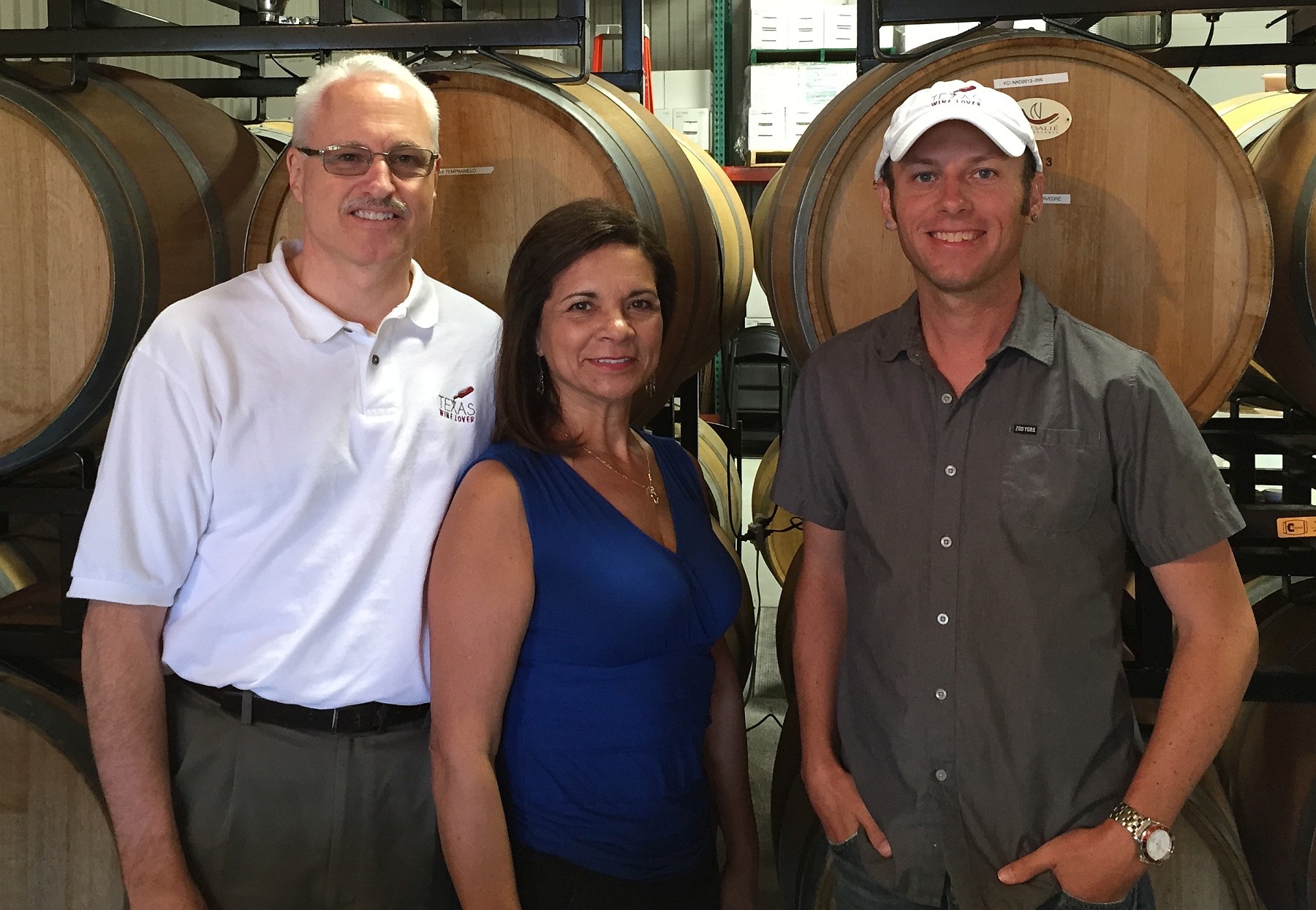 Heading back to Houston, the next stop was a quick one at William Chris Vineyards for a glass of Skeleton Key. We also wanted to clear up a little confusion some people seem to have. Is it William Chris or William and Chris? The confusion comes from the little logo between the words William and Chris because it looks like an “and” symbol. We were told it definitely is William Chris and that little logo comes from a Christmas ornament that was offered years ago by the winery and they thought it would make a nice logo. Co-owner Bill Blackmon even drew the ornament hanging on a grapevine, which is on one of the walls in the Hye Society Lounge.

Now it was time to head home. No wait, there’s Hye Meadow Winery right across the street! After stopping in and saying hello to co-owner Denise Batek, her husband Mike came out from the back after moving a pallet of wine. Gloria and I each picked a different glass of wine to enjoy while we had a great conversation with Mike.

After our stop at Hye Meadow, we had to stop at Lewis Wines just up the road to see their new tasting room. Tastings had previously been done in the production building only, but now there was a brand new tasting room and pavilion. We had to test out the comfortable couches with a glass of Swim Spot while we learned more about the pavilion. Tastings will still be done in the production room when needed, but the primary tasting room is now in the pavilion and tastings are still done by appointment. So make those appointments to visit Lewis Wines. 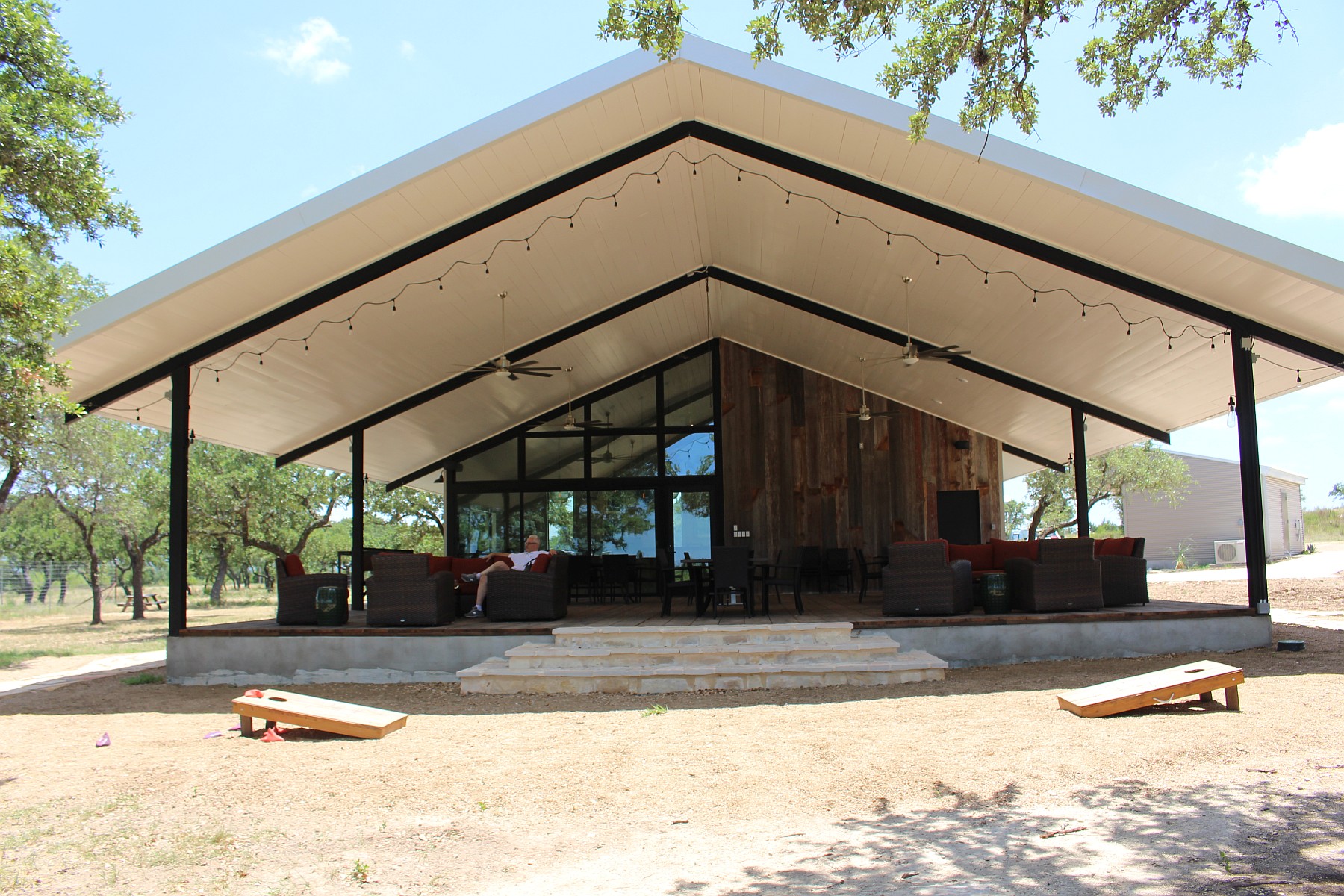 Okay, now it was time to get home. But driving through Johnson City, Gloria mentioned that the last couple times we had stopped at Texas Hill Vineyards, it had usually been crowded in the tasting room, so let’s stop. Whatever you say dear. We hoped to see co-owner Gary Gilstrap, but he had the day off. Hey, everybody has to have a day off sometime. We marveled at the new wines that were on the tasting menu since the last time we were there, and ended up bringing home an estate wine.

Now it was really time to head home. Uh oh, there’s that lighthouse and big arched building that we recently learned is now offering wine tastings. As long as we’re here, let’s stop. Up the steep road to the Arc de Texas we went. The only Texas wine being offered was a Westcave Cellars Sweet Red and since it was such a hot day, we opted for a little bubbly of Campo Viejo Cava (from Spain for you Texas only wine lovers). We took the elevator to the top of the arch and enjoyed the view from all sides. They also offer lodging for the night at various places on the property so we may need to look at that in the future. 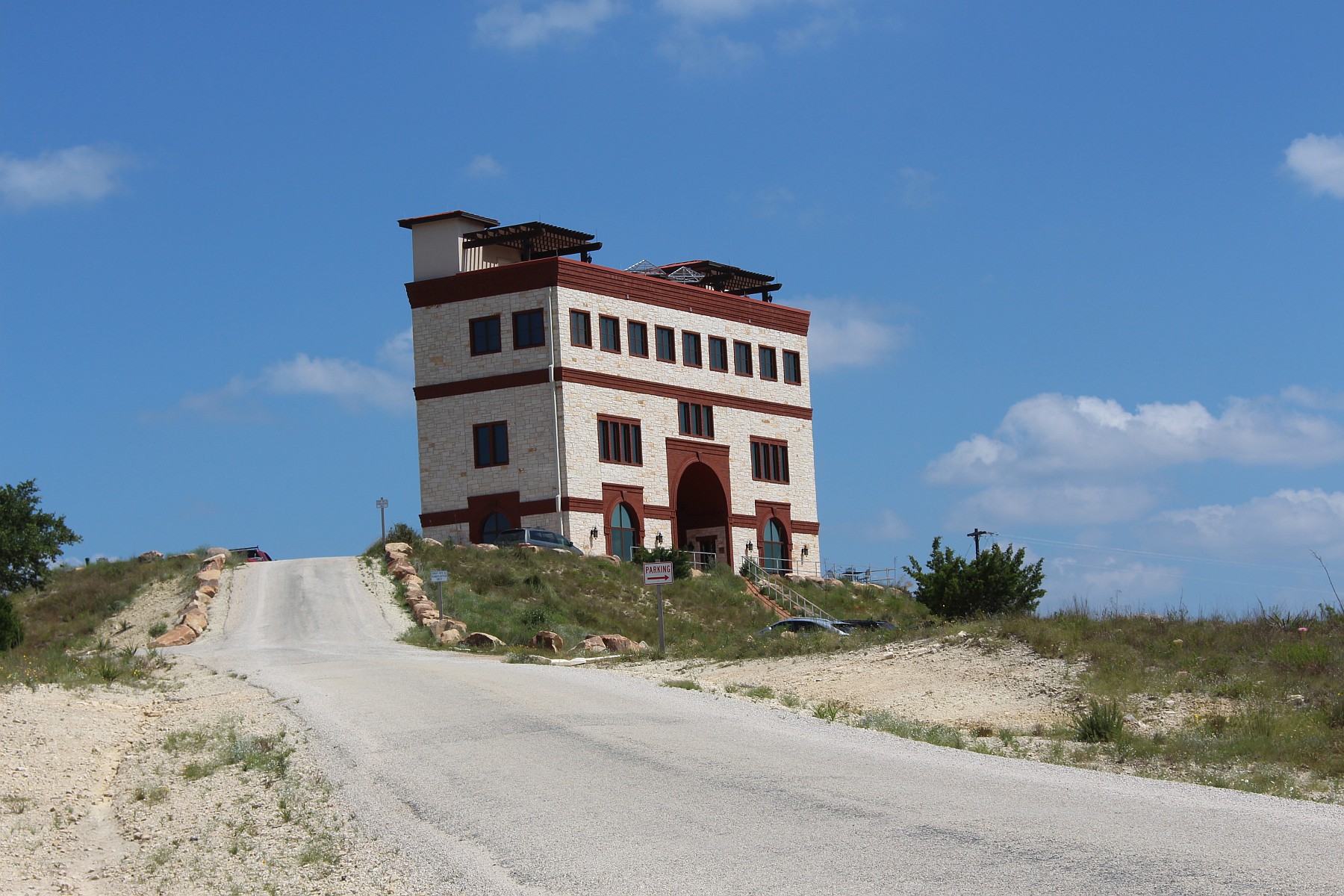 Can we go home now? It was getting late, so yes, we can. That two-day impromptu trip ended up having us drive 584 miles in 10 hours and 42 minutes, but hey, we did get 27.4 miles per gallon in a 6 cylinder SUV. It had turned into a very fun weekend, but now it was back to reality for another five days, or until we take that next impromptu trip!