For several years, a large hole carved out of limestone and rock on the face of a hillside stood and waited. Over the next several years, a winery grew bit-by-bit. As of June 26, 2015, Hawk’s Shadow Winery & Vineyard is now a complete and beautiful destination in the Texas Hill Country.

I was lucky enough to attend the ribbon cutting for Hawk’s Shadow on that warm, muggy Friday evening. Owners Doug Reed, Tom Reed, and Chip Conklin welcomed members of the Texas wine industry to celebrate their official opening. The Dripping Springs Chamber of Commerce, friends, and family also came out for this long-awaited weekend.

Originally, the opening was planned for Memorial Day weekend. But the weeks upon weeks of rain had other ideas. Construction struggled to move forward under the problematic conditions, putting the finished winery behind schedule. Despite that, guests still flocked to the winery on Saturdays and Sundays, watching and waiting for completion.

I was one of those people. The weekend after Memorial Day, I decided to see how things were coming along. I enjoyed a self-tour of the cellar; at that time it neared completion, as it still lacked a door and a cooling unit. The same went for other areas, like the production facility, office, and bathrooms. The tasting room and the porch were ready, so we could still enjoy the scenery and the wine.

As for the Grand Opening, I have to admit that I arrived early, as I had other plans for the evening. So at first, I was one of the few industry people there, along with Miguel Lecuona (the man behind many of the beautiful pictures on display in the tasting room) and Bob and Susan Wonacott (who grow Zinfandel for Hawk’s Shadow). The small crowd allowed Doug Reed to take me on a tour of the cellar. The door, which still needed finishing, was up and the cellar temperature was quickly cooling. In fact, it was far enough along to make it possible to bring down a handful of barrels. 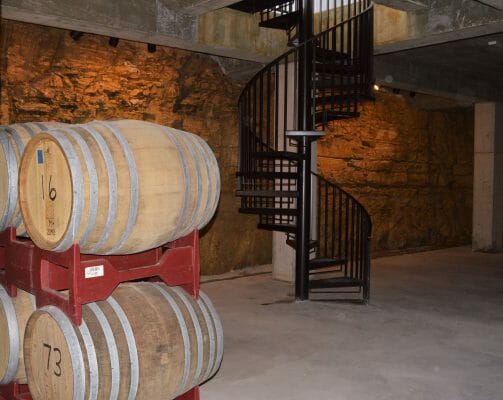 The cellar is a highlight at Hawk’s Shadow. While down there, Doug explained that the cellar will comfortably hold about 270 barrels stacked three high (twice their current inventory). The space is large enough to accommodate those barrels and still have room for maneuvering. A walkway down the center is planned, along with more open space. In fact, the area where the barrels are currently situated will likely be open, and there are thoughts about using that space for special events. As I told Doug, I would jump at a chance to have dinner in the cellar. For more on the cellar, see this earlier post.

Upstairs, I toured the production area. The tanks and fermenters were situated. Tom Reed joked that they looked small in the spacious room, but that space means room for expansion to help fill the cellar. In addition, I saw the crush pad and the barrel lift. It was after seeing those that I realized that this winery is extremely well planned. The careful construction will make the wine making process run smoothly, as Jeff learned during a previous visit. Guests will be able to see the action; the tasting room comes equipped with a large window that looks onto the floor.

It did not take long for others to arrive, including Benjamin Calais, Mike Igo, January Wiese, Katy Jane Seaton, and Laura McCarley. As the crowd grew, tasting began in earnest. But it would be interrupted. Part way through the tasting, everyone filed outside for the official ribbon cutting. The Hawk’s Shadow family gathered around to officially open the winery. As Doug, Tom, and Chip cut the ribbon, the gathering raised their glasses to celebrate this momentous occasion. After a round of pictures, most headed back into the tasting room to escape the heat. 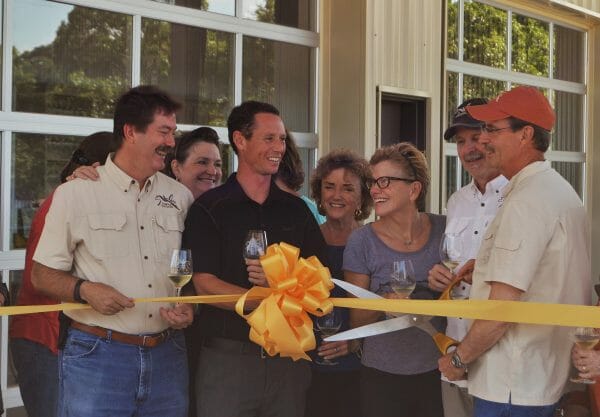 The rolling doors stayed down that evening to keep us cool, but the many windows allowed us to still enjoy the breathtaking view. Even from inside, I could glimpse the vineyard just below the winery. Some lounged in large comfortable chairs and sofa, others relaxed at one of the many tables, and some lingered about in the large open space. Even as the crowd grew, we had plenty of room.

Before I left, I resumed the tasting, joining others at the bar as Tom poured. We moved through the reds, and we took our time to admire the Zinfandel. Normally, the bar is for purchases, but that night it was a beacon. Unfortunately, I had to leave early, so I missed the many more industry folks and friends that arrived later and marveled at the sunset.

The festivities continued on into the weekend. Saturday and Sunday welcomed all Texas wine lovers. Come Saturday, the normal tasting practice resumed; guests could sit and enjoy the tasting at any of the tables throughout the winery. And, as always, the friendly and accommodating nature of the entire Hawk’s Shadow family was on full display, enchanting visitors.

The weekend celebrations included a few special activities as well. Many raved about the barrel tastings with Tom in the cellar. Tom shared the 2014 Zinfandel, as well as information on the wine. Others shared their enthusiasm from their visit, which, for some, included some wine club only wines.

And for those who missed all the grand opening fun, the winery is waiting.