I was invited to be a judge again at the 2015 Lone Star International Wine Competition and like last year, the judging happens on Monday and Tuesday. Since I was driving to Grapevine, I decided to do what I did last year, take an early road trip to visit wineries I haven’t seen yet in addition to wineries I haven’t had a chance to visit recently.

I started on a Friday and my first stop was a sneak preview at Torr Na Lochs who will be having their grand opening on September 12. I met Karen DeBerry and she showed me around the newly built winery. The view is incredible from the back patio and the wine selection is impressive for a new winery, so I can’t wait to visit again after they are open.

One of my major goals for the day was to visit Brennan Vineyards to see winemaker Todd Webster for two purposes (more on that in a little while). Along the way to Comanche and Brennan Vineyards, I decided to stop at a couple wineries for a quick visit. The first winery was Fiesta Winery to see what new wines had come out. I was also hoping to see owners Stephen and Sally Baxter as it is always a pleasure talking to them. I tried a couple new wines including the wine called Country Road, which is a very nice dry red wine. Fortunately Stephen and Sally were at the winery, and it was nice catching up with what was new at the winery. It is nice seeing more dry wines being produced and people realizing that Fiesta Winery is more than a sweet wine winery.

Next up was Alamosa Wine Cellars. Co-owner Jim Johnson was out in the vineyard while I enjoyed a refreshing glass of wine on the patio. Jim came in from the field and we had a little conversation while he had me try a couple wines, which I did end up buying. It is a shame the Johnsons are retiring, but that is understandable eventually. I just hope somebody buys the winery and keeps it going with the legacy they have developed. 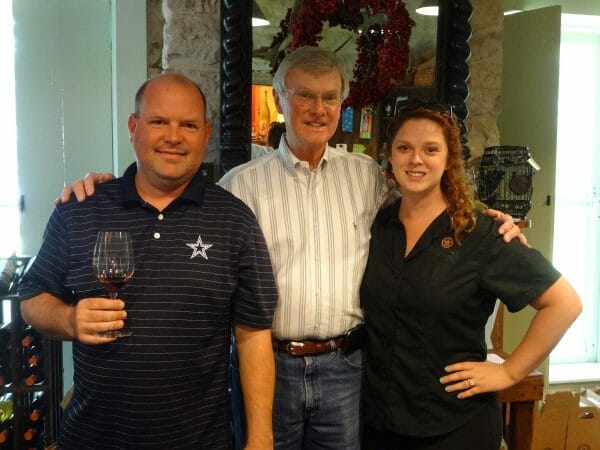 I arrived at Brennan Vineyards and met winemaker Todd Webster inside. Also present was sommelier Rebecca Conley and co-owner Pat Brennan even stopped in to say hello. First up was one of the two tasks for which I needed to meet Todd. We were part of a group who won the bid on a Texas wine lot of large format bottles in 2014 at the Houston Livestock Show & Rodeo and one of the bottles Gloria and I ended up with from the group was a Brennan Vineyards Lily. I needed an autograph! After Todd signed the bottle, we tasted a few wines and then went to do our next task, which was to record a podcast featuring Todd. If you have not heard the podcast episode yet, you should give it a listen and you can listen on wherever device or computer you are reading this. And after you’re done, feel free to subscribe to the podcast too. We had a fun time recording the podcast and Rebecca thankfully was there taking photos of the recording. I had a great time at Brennan Vineyards as usual and tasted some excellent Texas wines.

The day was going very well, but unfortunately all things cannot stay that way. I had made plans ahead of time with the next two wineries, but in both cases either something had come up or there had been some miscommunication. Thankfully the last winery of the day was a success.

I visited Sweet Springs Winery in Weatherford and had an enjoyable tasting. You can read about my visit that I previously wrote about. There were a lot of other customers who were enjoying themselves too. It was getting late and it was time to make my way to Fort Worth and check in at the hotel I had reserved for the next two nights.

On Saturday, I drove into Grapevine to visit the new Bingham Family Vineyards tasting room since they opened early. For having newly bottled wines and being a new winery, this will be a place definitely worth coming back to visit. I wrote about my visit to the tasting room earlier. 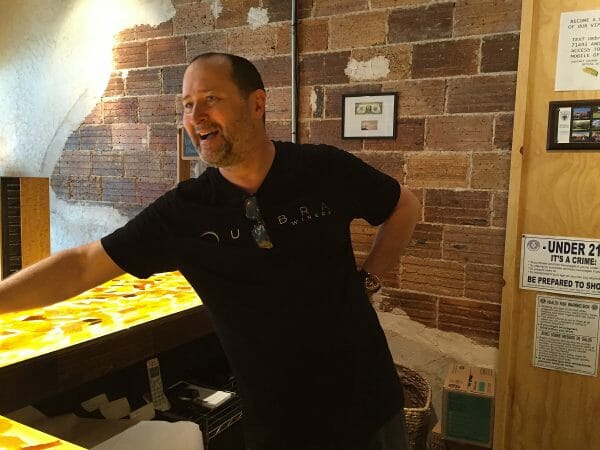 Since I was in Grapevine, I stopped into Umbra Winery to see what was new and met owner John Wilson again for a little chat. It was time for lunch so I had some food, and it was just enough to make me full and satisfied along with the wine.

Since my objective winery was not going to be open that day, I decided to make it down the road to Burleson and visit Lost Oak Winery because it had been a number of years we had been there last. I started a tasting and had these wines picked out to taste:

While I was seated in what I believe was a bridegroom’s room to do the tasting, a tour group returned and as the tour guide walked by my table, we did a double take and he said, “You look familiar.” I knew from Facebook that Dwayne Loftice worked at Lost Oak Winery, but I did not know in what capacity. I said, “Dwayne?” and that’s how the rest of my afternoon started.

Dwayne sat down with me and we enjoyed getting to know each other and talked about quite a few things. It was time for his next tour to start and he left for the tour. My tasting guide said she was surprised I didn’t go with him on the tour, and I said I didn’t think I could. It didn’t take long before I was out the door and catching up to his two-person tour group, which now had three people. 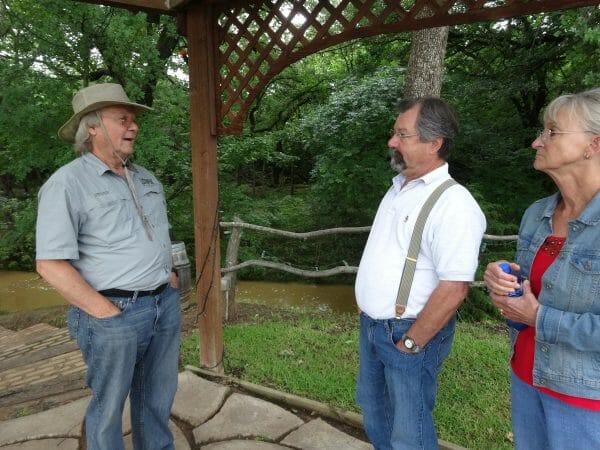 I have taken a tour at Lost Oak Winery before given by winemaker Jim Evans and Dwayne Loftice added more information to my knowledge of Lost Oak Winery. There are 52 acres total on the property and a number of acres in the vineyards growing grapes like Black Spanish, Blanc du Bois, Ruby Cabernet, and Syrah. There are wild mustang grapes growing all over the property but they do not make wine from those grapes.

Dwayne talked about how the glassy-winged sharpshooter passes Pierce’s Disease around to grape vineyards but is also on crepe myrtles that may be around your house. On the Syrah (Shiraz) grown at Lost Oak Winery, they put a yellow sticker on the vines. When the sticker is covered with so many sharpshooters, then they know it is time to inject chemicals in the irrigation system to keep the sharpshooters off the vines. Speaking of irrigation, the water used comes from the surface level pond on the property. It had rained a lot during the previous week, so the water was very high in the pond.

Lost Oak Winery started by making 500 cases of wine but today is now producing 6,000 cases a year. In the production building, the tour group got the chance to taste Blanc du Bois from a tank and also a finished wine. The winery uses both French and American Oak but their Tempranillo is only in American oak.

The tour was over and Dwayne was done working for the day. We enjoyed a bottle of wine together and I then had the pleasure of doing some barrel tastings with him. When I saw the barrels, I noticed they were slightly tilted with the bung not at the very top of the barrel. This was only the second time I had seen this at a winery. Dwayne said they do it to give easier access to the bunghole for sampling or filling. 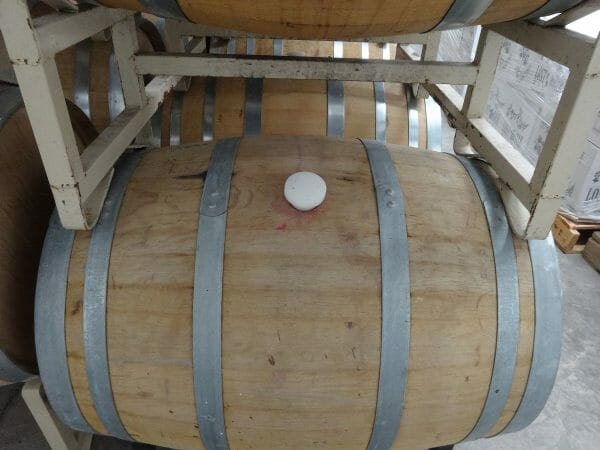 These are the wines I tasted from the barrel:

Everything I tasted was excellent and I cannot wait to buy bottles of the finished wines. It was now the end of the day, so I had to say goodbye to Dwayne and Lost Oak Winery. The afternoon was the longest time I have spent at a winery and I enjoyed every minute.

Sunday came and this was going to be a busy day because it was time for Messina Hof Grapevine’s first VIP reception followed by those who wanted to attend the Texas Rangers vs. Boston Red Sox baseball game. There were quite a few VIP members who had made the trip from Bryan so it was nice seeing familiar faces. It was another successful VIP reception and the Texas wine lovers in Grapevine will be happy Messina Hof is now in Grapevine. 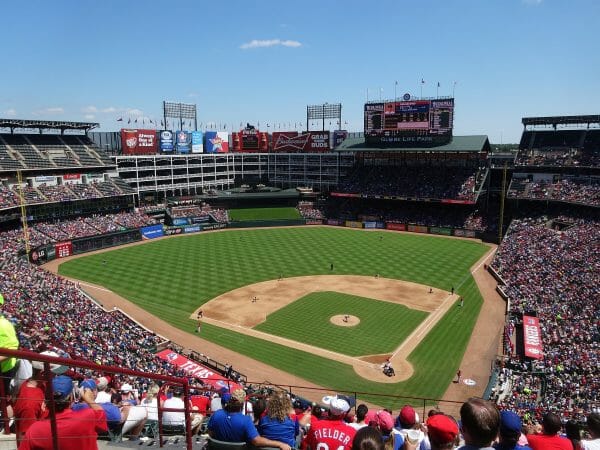 We all boarded two buses and made our way to Arlington and Global Life Park where the Texas Rangers play. First was tailgating with burgers, hot dogs, and of course Messina Hof wine. We then moved into the ballpark where we had seats in the upper deck right behind home plate. It had turned into a sunny day after all the previous days with rain, so it was nice when later on some of us were able to move even higher up in the stands underneath the covered shade. Even better was the bottom of the 9th when the Texas Rangers pulled out a victory making a great ending to the day. 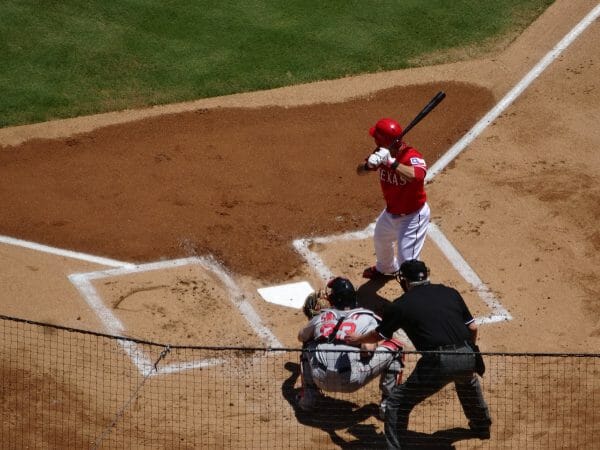 After the buses returned to Grapevine, I had to find my next hotel which fortunately was not too far away. The next two days were spent helping judge the Lone Star International Wine Competition. Fellow Texas Wine Lover team member Jeremy Wilson was able to make the trip, so we had an enjoyable time judging and also meeting new contributing writer Krista Hartman. She wrote about her experience as a judge, which summed up very nicely how our days were. 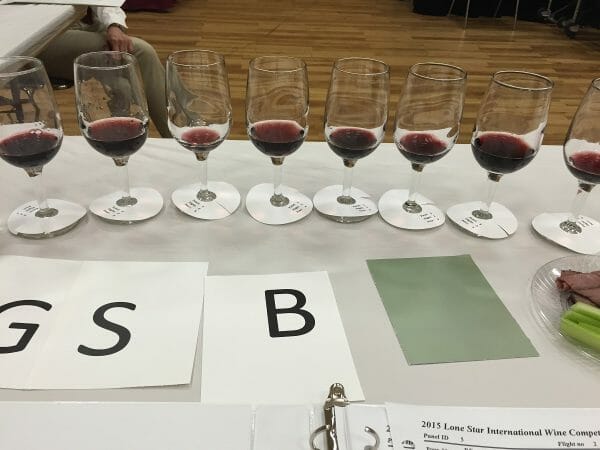 I had spent five days away from home, but it had turned into a very fun road trip.