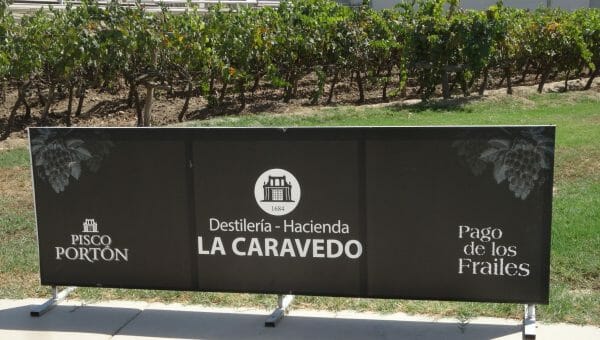 On our second day of visiting Ica in Peru and the different bodegas in the area, we had prearranged an appointment at the distillery for Pisco Portón. Last year we had the pleasure of meeting Mr. Johnny Schuler, master distiller and spokesman for Pisco Portón, when he was visiting Houston. We had such an enjoyable time and could really tell the difference between the pisco that Portón was selling in the United States and the others that Gloria had brought back from Peru on previous visits. When we decided to visit Ica, the oldest distillery in Peru, Hacienda La Caravedo and the home of Pisco Portón, was a must see.

I made an appointment to visit with Yanina López, Coordinator for Tourism & Recreational Activities. We had a choice between a complimentary free tour and basic tasting which lasted 40 minutes, or for a fee, a pisco tasting, Peruvian tapas, and Peruvian Paso horse show that would last 2.5 to 3 hours. To us, that was a no brainer if we were going all that way.

After passing through the security gate, we were led to the lobby where we met Ms. Yanina López. Johnny Schuler was in the United States and Ms. López would be handling our tour. This was not a problem for us because she spoke perfect English and gave a wonderful tour.

We started the tour walking down an arbor with the seven grapes used by Pisco Portón. The only grape they do not use is Uvina. We were a little surprised that only the two of us were on the tour, but the company tries to give a personalized tour, if possible, instead of a group tour. We walked past part of the original distillery which was started in 1684. Wine was originally made at the location starting in 1563. We learned the most awarded pisco in Peru is Pisco Portón. Three styles of pisco are made in Peru: 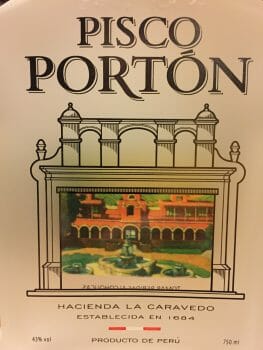 The gorgeous house could not be missed as this is the house that is pictured on the Pisco Portón label. Owner William Kallop, who happens to live in Houston, stays in the house when he visits Ica. In fact, the label for the bottle had a drawing of the house first and because of that, the actual house was built based on the label! 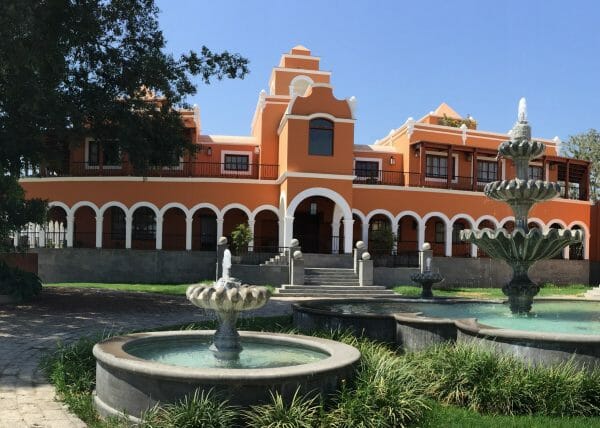 We were shown the original distillery which is basically two distinct sections. One has the traditional concrete fermentation tanks that has a holding capacity of 20,000 kilos with each tank holding 1,200 liters. Pressing is also done in this area and once a year they still use the traditional method of stomping grapes by people. 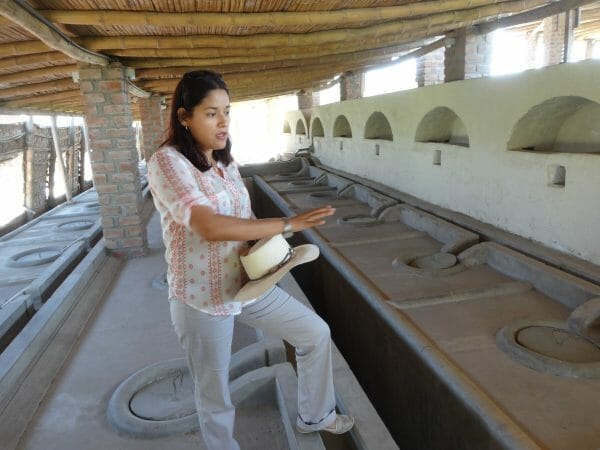 Johnny Schuler wants to use the traditional tanks again next year for their Pisco Puro. They would not work well for Mosto Verde because fermentation has to be controlled. By the way, it takes 5 kilos of grapes for Pisco Puro and 9 to 11 kilos for Mosto Verde.

The juice is then sent to the next section using gravity feed via cement channels in the ground where wood fire ovens then heat the stills above. The spirit then passes from the still via a pipe in the side to a large water pool which is the condenser. The pools contain copper coils and from there the spirit ends up in the next level below and can be seen coming out of a pipe into tanks. One interesting thing we learned is it does not matter if young grapes are used for pisco since they are looking for quantity. Old vines are better suited for making wine. The pisco is then rested by law for three months minimum before it can be bottled, however, Portón waits at least one year. 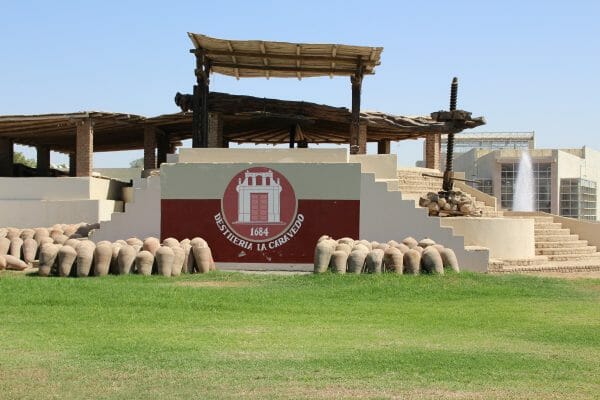 In the back of the property are the vineyards where they have 29 hectares of grapes being grown. Elsewhere they have some land for a total of 60 hectares, although they do have to buy grapes from others too. The grapes they do buy have to meet their quality standards though.

We walked to the new distillery which is a tall building typical of a modern distillery. A large fountain in front of the building actually uses the hot water piped underground from the old distillery’s condensing pools to use in the fountain and then allows it to cool. 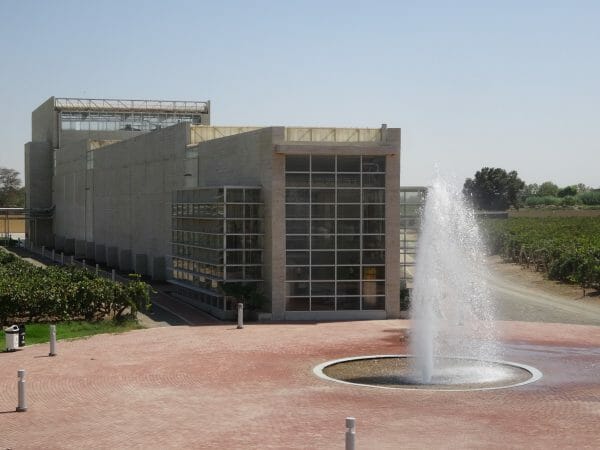 They are growing Quebranta, which is a hybrid, on one side of the new facility. We were shown the typical crush pad which feeds the grapes into tanks up high. The bottling room was next with the large bottling machine. Here is where we learned how they label their beautiful bottle that looks like a window and then has the house in the back of the bottle. It’s a simple double-sided label. Bottles and corks are used that are made in China. About 65% of their production is exported and they sell in six different countries. 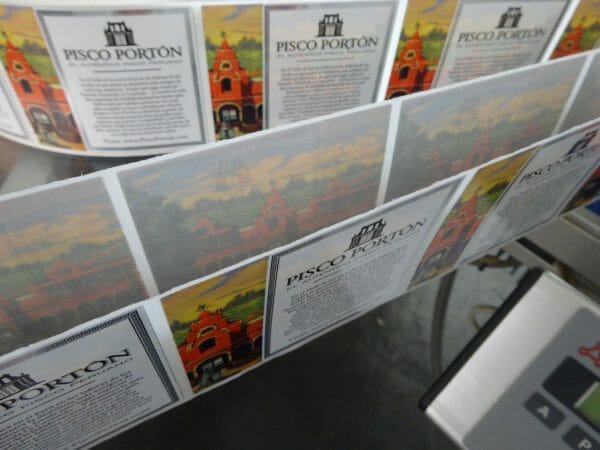 One interesting thing is that Johnny Schuler requires the empty bottles to be rinsed first with the same pisco that is being bottled. The machine can handle 3,000 bottles an hour manned by six people.

Next came the 43 fermentation tanks which hold 20,000 to 30,000 liters. There are also 24 concrete tanks that are lined with epoxy that hold 50,000 liters. At the end of the building is the still room with German stills surrounding the room and a capacity of 3,500 liters. Liquid gas provides the steam and they can get 600 liters out of the 3,500 liters fed into the stills.

There we learned there are two ways to make good pisco:

The blend which is commonly found in the United States has mostly Quebranta in it, but it always has just 1% Albilla for a little aroma. The minimum number of grapes used in the blend is three and the maximum so far that has been used has been five grapes. 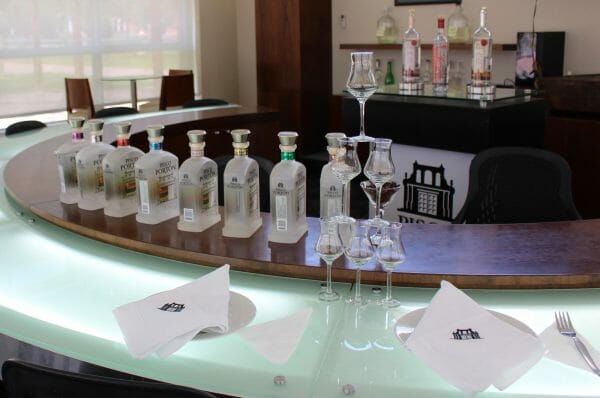 It was a hot day and now that we had taken the tour, it was time to taste some pisco! The tasting room was already lined up with the different pisco bottles we would be tasting in addition to a different Pisco Portón glass for each one. Tastings are done in the order of less aromatic to more aromatic. These are the ones we were able to taste in the order tasted: Quebranta, Mollar, Negra Criolla, (starting aromatic here) Albilla, Italia, Moscatel, a bonus Italia Rosada, Torontel, Acholado, and Pisco Puro with a Pisco Puro Quabranta and Pisco Acholado. 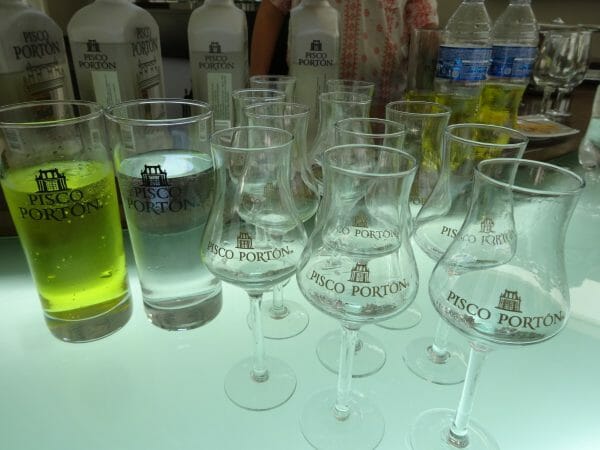 Surprisingly after all that, we did not really feel a little inebriated which gives credit to the quality of the pisco. There was definitely a difference between each pisco as we learned to taste the differences and the aromatics. We enjoyed all varieties and at the end, we came home with a bottle of Albilla. Hopefully this is one of the piscos that will soon be available in the United States.

How can we forget the tapas we had during the tasting? They were incredible and more food than the two of us could eat. The tapas started with causa with avocado, potatoes, fruit, chicken, and shrimp (langoustine). I ate a fruit I had never had before which was aguaymanto (golden berry), a little bigger than a large grape, and orange in color. All the food was fantastic. 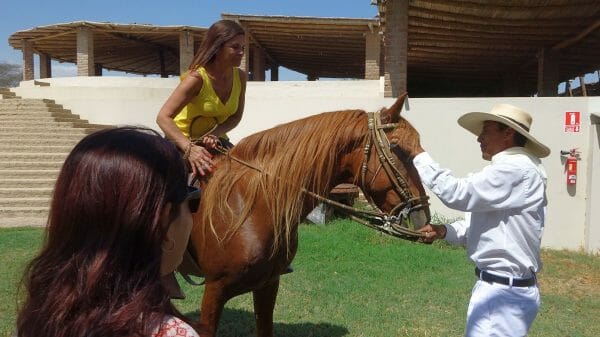 We walked outside where a rider was arriving on a Peruvian Paso. The horse is distinctive with its ambling gait. After a little show, Gloria then got the opportunity to ride the horse while the original rider tried to keep up with the horse by holding the reins.