Pisco is a distilled spirit made from grapes and is the special liquor of Peru. Gloria and I took a recent trip to Peru and we planned on visiting Ica, which is one of the main cities south of Lima and one of five regions which can make pisco in Peru. The last time we were in Ica, a tour company arranged one bodega (winery) for us to visit. We knew there had to be better, so this time we arranged our own tour of bodegas based on our knowledge and reviews from others.

The Peruvian government strictly regulates the quality of Peruvian pisco. There are eight possible grapes which can be used to make pisco in Peru: Moscatel, Quebranta, Mollar, Negra Criolla, Albilla, Italia, Torontel, and Uvina. In addition, pisco must be stored for three months before it can be bottled. This time can vary depending on the bodega. Since Ica is located in a desert, it is usually too hot to make wine, although a few bodegas do make wine in addition to pisco. The grapes used for wine are common vinifera grapes like Chardonnay, Roussanne, Tempranillo, Tannat, and then others which are not that common. 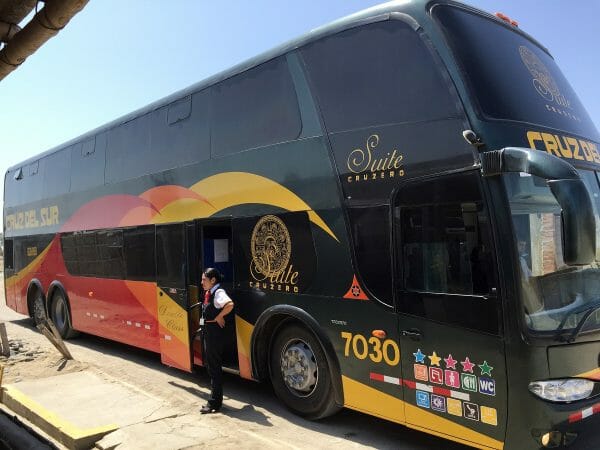 We took a five hour bus ride from Lima to Ica with it departing Lima at 3:30 am. Yes, that was early but we decided we could sleep on the bus since most buses between cities in Peru are double-decker tour-style buses and we could easily sleep. We arrived in Ica at 8:30 am and dropped off our bags at our hotel, Hotel Las Dunas. A taxi then took us to our first bodega of the day. We had arranged with a taxi driver at the bus station when we arrived to take us around for the day. This was a great idea since some bodegas are away from the city on winding dirt roads (it reminded us of Texas) so I don’t know how we would have found a taxi otherwise. 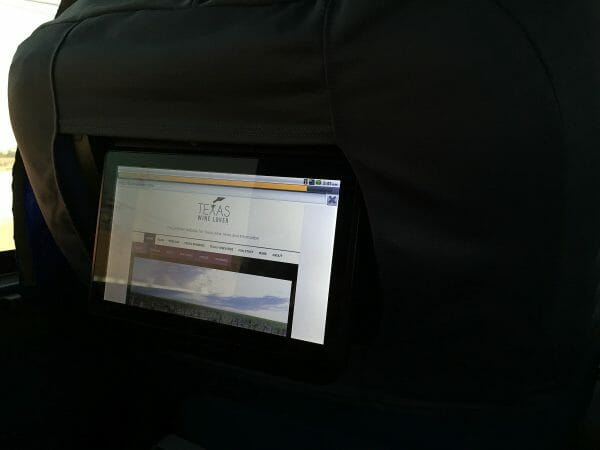 Texas Wine Lover via wi-fi on the bus entertainment system

Hacienda Tacama Bodega opened at 9:00 am which is earlier than any Texas winery, but we felt sure we could handle drinking wine or pisco that early in the day. Plus it would allow more time to visit other bodegas.

We arrived at Tacama and after a short time started our tour. Unfortunately, the English speaking tour guide was not yet in, so Gloria had to do the translating. The Tacama vineyard started in 1540 and the grapes came from the Canary Islands. The property of 200 hectares was a monastery first and then it became a commercial bodega. They started with four varieties of grapes and today are growing 20 varieties, primarily French varieties for wine, table grapes, and pisco grapes. The wine grapes are planted on rootstock while the pisco grapes are planted on their own roots. Harvest is December to March so the harvest had taken place about a month prior to our visit.

Vineyards at Tacama with Andes mountains in the background

Tacama produces one million liters of wine a year and 100,000 liters of pisco. It takes 1.5 kilograms of grapes for one bottle of wine but 5-6 kilograms for a bottle of pisco. Concrete tanks are still used for wine but pisco is stored in stainless steel tanks for seven months. The pisco made at Tacama is 43% alcohol.

After the tour, it was time for a complimentary tasting of Tacama’s wines and piscos. We tasted a variety of white, blush, and red wines followed by a couple piscos. It had been a good start to the day.

The next bodega visited was Bodegas Vista Alegre. This time the tour guide spoke English. The bodega used to also be a monastery and the bodega was established in 1857. There are 180 hectares at the bodega and wine is also made in addition to pisco. All grapes used come from the area. The tour started like most winery tours at the crush pad and ended in the production area. 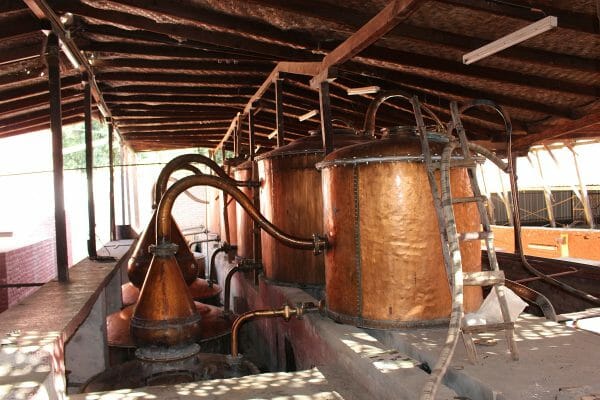 Bodegas Vista Alegre waits six months to bottle its pisco. Like a lot of old wineries, they had large oak barrels which are not used anymore except for decoration. Smaller barrels are used because the wines can age faster. Large fiberglass tanks are also used in addition to 120,000 liter concrete tanks for the pisco. A large bottling machine can handle 3,000 bottles an hour where Portugal corks are used for wine and screw caps used for pisco.

We had heard of the Picasso Tempranillo made at the bodega and were lucky to get a chance to sample a 2008 vintage since they have moved on to 2010. By the way, their Tempranillos are aged for one year in the barrel. We also had the chance to taste their piscos.

The next bodega down the road was El Catador. We were lucky again with an English speaking guide and he was a lot of fun. The bodega was small but the tour was informative. The pisco juice ferments for 15 days. They start with 1,600 liters of juice but after fermentation, they only get 400 liters of pisco. Our taxi driver had told us there are about 90 bodegas in the area so there are a lot of smaller ones. After the tour it was tasting time again and in addition to regular piscos, we had our first try at a blended pisco very similar to the cocktail Algarrobina. 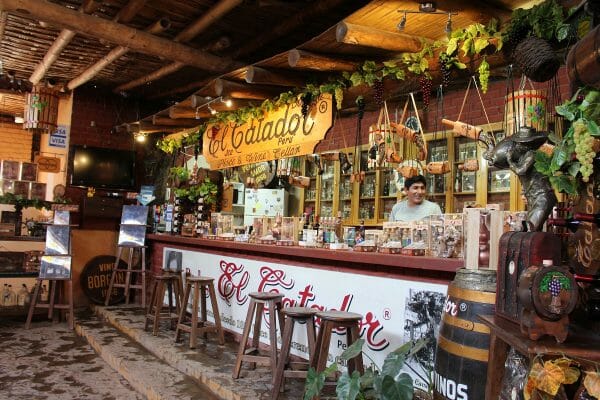 It was time for a late lunch, but first next door was the bodega Tres Generaciones where we sampled a couple piscos. A nice lunch was then had with, of course, Peruvian food chosen.

We had one more bodega we wanted to visit, but our driver said it was on the other side of town. When we found out we would not have much time there before it closed, he recommended a bodega nearby, and we are glad he did. We arrived at Bodega Lazo not knowing what to expect. It was another small bodega but they give first class treatment to visitors. 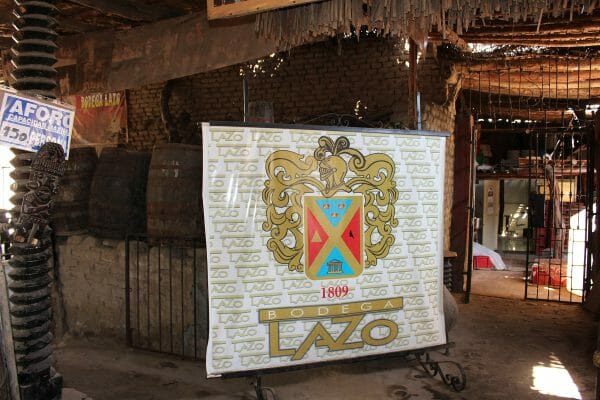 You may have seen the clay receptacles which are carrot-shaped before at a winery. These were often seen as decorations at the bodegas we had already visited, however Bodega Lazo still uses them. There a few names for the clay storage but they are commonly known as botijas or piskos. When we walked into the room which had a number of them and saw another couple doing a tasting from one of them, we knew we were in for an experience.

A tour guide came up behind us and not speaking English, Gloria again was the translator. He started us by tasting a wine from one of the botijas but instead of the usual wine thief we have seen used at wineries, this time the thief was a bamboo stick with a special cutout for pouring the liquid called a benencia. We must have tried at least a few wines and the same number of piscos. We didn’t keep track of the total because our guide was having fun with us explaining the process and then made us use the bamboo thief to get our own sample. By far, it was the coolest “barrel” tasting we have done. Check out the video!

It was time to call it a day, so our driver returned us to our hotel where we enjoyed a relaxing evening. We arranged for him to pick us up the next day for our previously arranged appointment at one more bodega/distillery, Hacienda La Caravedo, the home of Pisco Portón, which you can read about the fantastic visit in our next post.