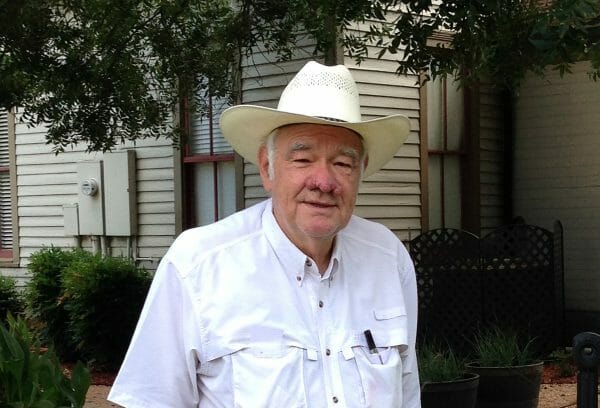 A larger-than-life presence has passed from the Grapevine wine scene and the Texas wine scene in general. Don Bigbie—entrepreneur, world traveler, wine maker, and civic leader—has left this life, leaving behind a rich legacy of wine making and community spirit.

The details are still forthcoming as I write this post, but my heart is saddened by the news, having just gotten to know Mr. Bigbie in advance of last fall’s Grapefest. I was writing a couple of posts featuring wineries along the Grapevine wine trail, and I asked Michael Woody of the Grapevine Convention and Visitor’s Bureau who would be a good person to profile for one of the stories.

“Talk to Don Bigbie,” Woody told me. “He’s got lots of stories.”

I had to name drop the bureau and ply Mr. Bigbie with a little email sweet talk to convince him to grant me an interview at Cross Timbers Winery, his Grapevine winery located in the historic Dorris/Brock house behind a row of gnarled trees on far north Main Street. An old school cowboy and self-made man-of-means, Don was no huge fan of the press and pandered to no one while advancing the Texas wine industry and promoting the city he called home. Even though (slightly) advanced in years, he was constantly on the move, and I got the sense that he had scant time to spare for a would-be Texas wine journalist.

However, from the minute I arrived, Don rolled out the welcome mat, taking me all around the rustic, charming grounds of Cross Timbers, a place I’d frequented before, but it was all new when seen through the eyes of the man who had literally built it with his bare hands. He also spoke of his long ago days with Braniff Airlines when he was a business jet setter learning to appreciate the nuances of a fine Bordeaux or a fruity Sangiovese.

Don had been experimenting with wine making for almost a half century, and his pride was evident as he watched me taste samples of his Viognier and Cabernet Sauvignon. I ended up spending almost two hours in the thrall of Don’s stories and wine, and for a gentleman who had initially seemed too busy to talk for long, we surely did enjoy a leisurely visit that lovely fall afternoon.

Just before I left, I asked Don if he would let me take a photo of him alongside the house he had so carefully restored back in the mid-nineties, when even a younger person would have viewed the challenge with trepidation. His rugged face broke into a big smile under the even bigger white Stetson, and I don’t know that I’ve ever taken a picture of a Texas wine maker that I will cherish more. I confess I was so touched by his hospitality and old fashioned chivalry that I asked if I might give him a kiss on his stubbled cheek, to which he consented, and now more than ever, I’m glad I was so honored.

Everyone in the Texas wine community will miss Don, and yet we are fortunate that his trail blazing spirit and contributions to the wine industry will live on. And I’m doubly privileged to have the recollection of that sunny, golden afternoon I spent with a true Texas legend.

Messina Hof Winery & Resort’s Paul V. Bonarrigo added this about Don Bigbie. “Don was a great ambassador of Grapevine and hospitality. Everyone he met became a friend.”