We usually make a trip to East Texas and visit new wineries and revisit other ones at least once or twice a year. The first 2015 trip happened last week. Since we only had the weekend to spend this time, we learned there was not enough time to visit all the wineries we wanted to visit!

The first winery we decided to visit was Kiepersol Vineyards & Winery and planned to get there at 11:00 a.m. when they opened. We had arranged to meet our friends Darlene and Roger Bruckbauer at the winery. Oops, I should have said winery AND distillery. The last time we visited Kiepersol was the premiere of the distillery and two tasting rooms: winery and distillery. At that time, Dirk’s Vodka was being introduced. Since then, Jimmy’s Bourbon and Pierre’s Rum have been introduced and we were eager to try those two. 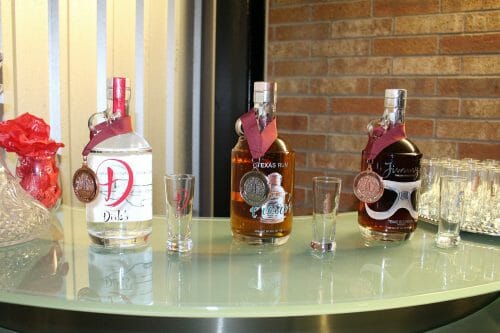 Since the saying goes “Liquor before beer (wine), never fear” or is it “Beer (wine) before liquor, never sicker?” Regardless, we decided to go for the liquor first. Coincidentally as we parked, winemaker Marnelle Durrett pulled up beside us. She walked with us to the top of the winding stairs that joins the two tasting rooms. Darlene and Roger were already waiting for us and we made our way to the distillery.

In the distillery, tastings or cocktails are available of the three spirits currently made by Kiepersol. We opted for a taste of the rum first and were surprised by the smooth taste. Actually we shouldn’t have been surprised because Dirk’s Vodka was also smooth. Owner Pierre de Wet soon arrived and along with another couple, we took a tour of the distillery.

Pierre gave us a taste of rum still being made and it too, even with the higher alcohol, was surprisingly still smooth. That is when we learned making the spirits finish smooth is one of their primary goals. Kiepersol learned after they entered the spirits in a New York state competition and came away with medals for all three, that they were doing something right. In fact, so much so, that an order was placed from a New York company and now Jimmy’s Bourbon is currently available in Texas and New York. 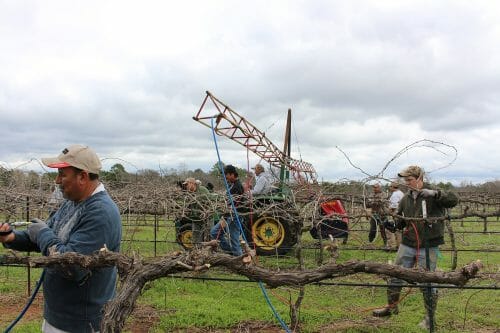 Pruning was taking place in one of their vineyards, so we hopped into golf carts and headed to the vineyard block. Kiepersol currently has 63 acres in 15 different blocks growing 16 varieties of grapes. They usually use manual hand pruners but with the vines getting older, it was getting tougher to prune so Pierre pulled out the pneumatic pruners. A tractor with a high boom powered multiple pruners and while we were watching, they were making considerable progress along the one block.

In the distance to that block was a windmill to provide frost protection. I made the comment that they too had recently gotten windmills, but Pierre corrected me saying they have had windmills for years. Besides the frost protection, he turns them on during harvest to provide a cooling breeze which makes harvest much more tolerable. 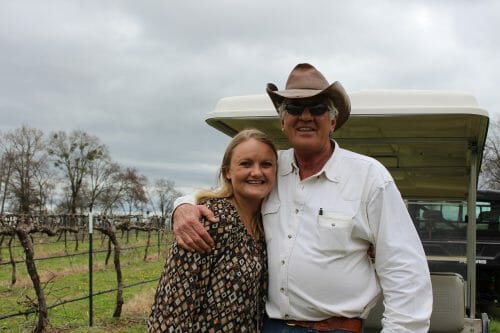 After our vineyard tour, it was time for some wine tasting. But before the tasting room, it was time to visit the wine production area and taste from barrels and tanks. Marnelle provided the tastings while we enjoyed the future Kiepersol offerings. Pierre said he has been asked often as to what the best year is for one of their wines, and his answer is, “Next year.”

A quick trip to the wine tasting room had us tasting some of Kiepersol’s recent releases and we were not disappointed. I am still amazed at an East Texas winery that is growing 16 varieties of grapes, making Estate wine, and yet they are not supposed to be able to do that because of Pierce’s Disease. We had many favorite wines among the ones we tasted and came away with quite a few to carry home.

It had been a fantastic visit at Kiepersol Estates and we will make sure we plan on spending more time next time. But it was now time for our appointment at Pelle Legna to see owner and winemaker Dawn Leatherwood. Darlene and Roger also joined us to see Dawn. We were late for our appointment, but Dawn graciously let us all join her previous tasting group in their arena bar. It was our first time in the arena bar, but it would make a great tasting room, complete with a big tasting bar, lounge, and a stuffed polar bear. That’s right, a polar bear that was huge! 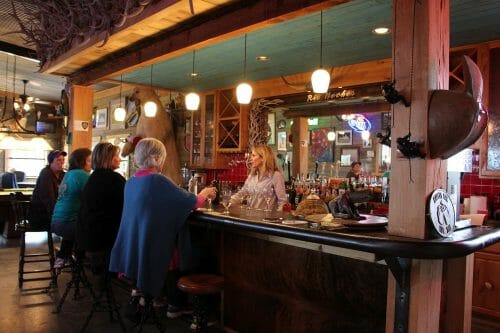 Dawn Leatherwood serving at the bar

Our group was able to start tasting Pelle Legna wine while the first group was finishing up their tasting. We enjoyed the wines that were available last year again and look forward to the next release of wines coming out. One of the wines was the 2010 Bilancia (66% Cabernet Sauvignon, 25% Syrah, 7% Merlot, 1% Zinfandel, 1% Sangiovese). A bottle was at the recent TWGGA Conference available for tasting at one of the exhibit booths, but one of our friends discovered it and after loving it, decided to keep tasting. By the time we got to the exhibit table, it was gone! So, it was nice to be able to taste a bottle at the actual winery.

I also discovered that Texas Wine Lover has a pinball champ on our team, as Gloria found the pinball machine in the arena bar and had to show us how to tilt that table. Once we got her off the pinball machine, we said goodbye to Darlene and Roger along with Dawn, and promised we would all get together again soon.

We had plans to visit another winery, but our day was quickly going by so Gloria and I then headed to Bella Stella Winery, which is a fairly new winery. I had met the owners at the last TWGGA Grape Camp and promised to visit. The winery is a German restaurant too and the locals have a nice place for good German cuisine and a large selection of wines from around Texas.

Our last winery visit was Los Pinos Ranch Vineyards where we had made reservations to stay in one of their cabins for the evening. After checking in and leaving our luggage in the cabin, we went back to the winery to have dinner with co-owners Chef Dana Pool and Gerald Jones along with his family. I had loved the Lobster & Crab Mac N Cheese last time we visited, and even though the Prime Rib special for the evening sounded great, I had to have the Mac N Cheese again. 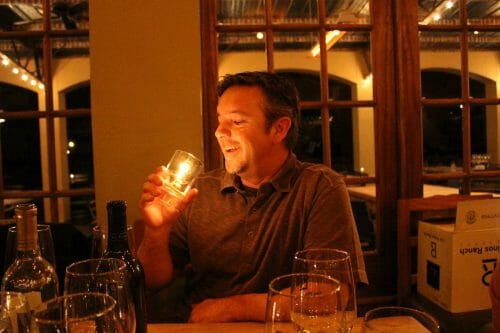 While the jazz band played in the background, we had a great conversation and enjoyable time with everybody until it was almost closing time. The evening actually went too fast, but we had to say our goodbyes and walked to our cabin. That is really nice when you can stay at a winery and just walk to your lodging instead of worrying about driving after drinking.

Saturday had been a cloudy and occasionally light rainy day, but when we woke up on Sunday, it turned out to be a much nicer day. The cabin overlooks the vineyard, and even when there are no leaves on the vines, it was still a beautiful view.

We didn’t want to leave, but it was time to eventually head for home. It had been a quick, but great visit to East Texas and some excellent wineries. The next time you have the desire to visit Texas wineries, remember there are some great wineries in the eastern part of Texas.