The Women of Whisk(e)y came to Houston recently and Gloria and I had the opportunity to attend a dinner at the Kipper Club Test Kitchen to visit with the women. Who are the “Women of Whisk(e)y?” They are four influential women working in the whisk(e)y business from around the world:

And why do I keep saying whisk(e)y? As you can see above, depending on where you are from, it is either spelled whiskey or whisky. From now on though, I will just spell it as whiskey. 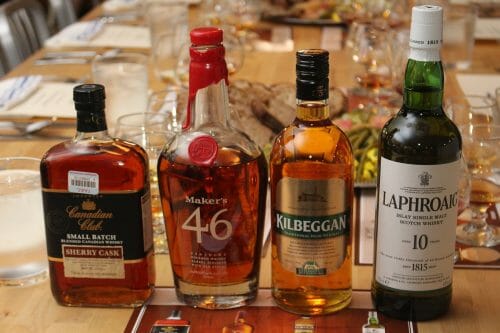 The dinner took place at the Kipper Club Test Kitchen which is a unique dining location. If you don’t look closely, it would be tough to find because it is actually in an attached part of a Shell gas station. The test kitchen was designed for chefs coming in to prepare for Treadsack’s upcoming restaurants. In the meantime, chefs are brought in for special meals for the public and the Women of Whisk(e)y was one of them. The restaurant is actually one big room and the dining tables are just part of the kitchen so you can see the cooking, plating, etc. taking place while you are seated. 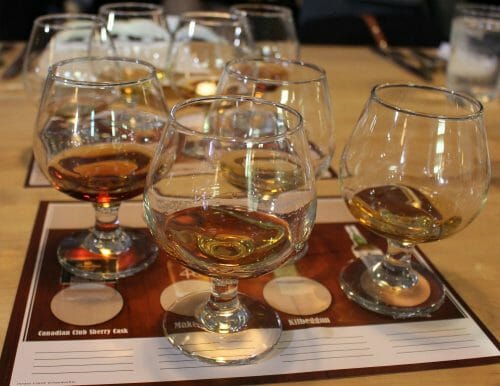 As we entered the restaurant, we were invited to sit at a number of tables around the room. Each place setting had four whiskeys at the head of the setting. This was different than a wine dinner because at a wine dinner, you would usually get served a glass of wine while you were waiting for the meal. Here there were appetizers and water while we could only stare and salivate at the whiskey waiting for us.

The four women were presented to the 50-60 dining guests and they each gave a brief introduction to who they were and how they got in the whiskey business which is usually considered a man’s world. Two of the women have been in the distillery business for 26 years so they certainly knew their whiskey.

We still had not had a chance to try any of the whiskeys but it was now time to teach everybody how to properly taste whiskey. Unlike wine where you give a good sniff from the glass, the higher alcohol would pretty much ruin you for the night. They still want guests to sniff the whiskey though, but the proper way to do so is to leave your mouth open while sniffing so the higher alcohol has a place to escape. Good thing to know!

It was then time to start dinner and this is the meal presented by Chef Mara Serna:

Each course was served with a special cocktail from one of the whiskeys made by bartenders Jessica Goldstein and Leslie Ross. The first course was served with a Makers 46 Manhattan and Victoria MacRae-Samuels introduced the Maker’s 46. Maker’s Mark is a bourbon whisky and the key she said to Maker’s Mark is their use of soft red winter wheat in the distilling. The Maker’s 46 was 94 proof.

The second course was paired with a Kilbeggan Irish Whiskey which is owned by Beam Suntory and Stella Lacken told us how Kilbeggan was started in 1757. The Irish whiskey is a corn and malted barley blend. She said some Irish whiskeys are triple distilled but theirs is only double distilled because the more you distill, the more flavor you lose.

It was time for the Canadian Club Sherry Cask for the third course and Tish Harcus told us about the whiskey. It is a rye whiskey and has a distinctive spicy taste. The whiskey is blended before aging and distilled to 82.6 proof. The cocktail was appropriately made with some Fino Dry Sherry along with the Canadian Club. 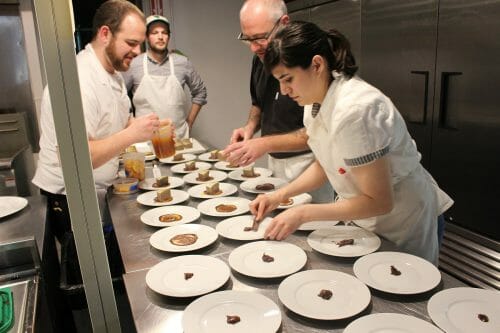 The final course was dessert and it was paired with a Laphroaig 10 cocktail. This was a Scotch whisky and Vicky Stevens told us about her first experience with a distillery in Scotland. Interestingly, her first experience was at eight years old on a school field trip to a distillery! She told the funny story of the tour and the tour guides who wore kilts, but I’ll have to save that for another time. Before Stevens spoke, a block of peat was burned to show how the Scotch whisky has a distinctive peat aroma.

The dinner was an interesting and fun experience with the different tastings of whiskey and the cocktails served with each course. All the food was excellent for a fine dining restaurant. We were all invited to the different distilleries by the Women of Whisk(e)y, so hopefully I’ll continue my story with a visit to one of the distilleries later.