Frost protection has become a very important topic for vineyards, especially due to recent years with late frosts harming the year’s harvest. Different methods to help protect the grapevines during these unusually late frosts are used such as burning hay bales around the vineyard to raise the temperature and hiring helicopters to fly over the vineyard to push the warm air back to the vineyard. One of the most common methods now used is wind machines.

At the 2014 Texas Wine and Grape Growers Association (TWGGA) Grape Camp, Steve Newsom of Amanecer Vineyards demonstrated a new frost protection system he will be using. The unit demonstrated was the FrostGuard by Agrofrost which was especially developed for fruit, grape, and vegetable growers. It was originally designed for small areas, but it has proven to be ideal for very big vineyards as well.

Wind machines are used in the west part of the country like Washington, but in the north and east such as Minnesota and New York State, FrostGuards are used. 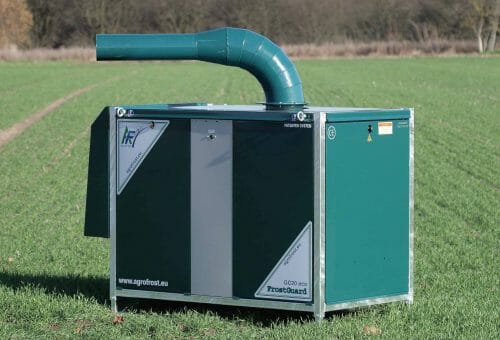 The FrostGuard has a gas burner and a powerful fan, driven by an engine that runs on propane gas. The engine is started, the temperature adjusted, and the FrostGuard does its job continuously turning 360 degrees and providing hot air to the vineyard. There is enough gas to last up to two complete nights. Multiple FrostGuard units are installed in the vineyard to provide more complete coverage and can be spaced out in groups in relation to the shape and area to be protected. The GC30 model covers a circle up to 370 feet or 2.5 acres and can be moved easily by a tractor forklift.

Steve Newsom took special interest knowing there had to be a solution to help with recent freezes. He took other grower’s experiences for the previous ten years and looked at the data including two to three weeks prior to a freeze and put everything in a spreadsheet. He then talked to other growers and learned what they actually lost. Looking at every event in the last ten years in which there would have been a frost and comparing it with the data received, there would have been a large dollar savings if the frost protection had been in place.

Steve said that growers in the past would prune later in the year just to avoid a possible freeze but that would affect the quality of grapes for the wineries. By providing frost protection, this allows the growers to prune at the right time and have better quality grapes.

Steve Newsom was so impressed with the FrostGuard frost protection that he became the main distributor for the Belgian made units in Texas, New Mexico, and Oklahoma.

Bill Day, owner of Buena Suerte Vineyards in the High Plains was also sold on the FrostGuard instead of a wind machine. I asked him why he chose the FrostGuard. He said, “It boiled down to two things. The wind machines are widely used and they do a good job down to about 27 degrees if there is a warm air inversion over the cold floor. If there’s not warm air up there, they’re not going to do anything.

“To install a wind machine, I would lose four rows of grapes that would just have to be taken out and done away with. Then they would have to be able to back a concrete truck out in the middle of my field for the base for the wind machines. My place is too sandy and the truck would get stuck.

“The FrostGuards are calculated to be able to protect at least some of the vineyard down to as low as 22 degrees. It’s been 22 degrees at my place just in the last two years during the frost season. So 27 degrees gets me nothing. I have to go with whatever will get me down to 22 degrees. The BTUs burned with the FrostGuards is also one half of the cost of running the wind machines. So it’s less money to operate and it gets me greater protection to use the FrostGuards. Instead of 6 wind machines, I’m going to have 15 FrostGuards on a 50 acre vineyard.”

Just like wind machines can be purchased outright or leased, the FrostGuards can also be done the same way. Bill and Gail Day looked at lease versus purchase options and compared the annual payment in both scenarios. They decided to purchase the units with a yearly loan. Even better is when they discovered if they save half a ton of fruit per acre in any year of their loan, they would have MORE than paid for their FrostGuard units.

To find out more about the FrostGuard units, check out the AgroFrostTexas.com website which includes more details and videos.