The Top of the Hill Country Wine Trail is a wine trail located at the northern end of the Hill Country. In Part 1 of this post, I wrote about the first of four wineries the media tour group visited and in this part, I’ll finish discussing the rest of the tour.

When we arrived at Fiesta Winery, everyone settled into the tasting room. Stephen’s wife Sally and others provided some appetizers for us. We then headed to the production room to do some tastings from the tanks. Stephen introduced his 23 year old son-in-law Weston McCoury who is the primary winemaker at Fiesta Winery. Jon Moore from Salado Creek Winery who Fiesta Winery had recently merged with to create Fiesta Winery Salado Creek will be an assistant winemaker investigating new wines to offer.

While we tasted their first estate wine from the barrel, the True Texan which is a 2013 Cabernet Sauvignon and Merlot blend, Stephen told us more about the winery. He had received a wine kit for Christmas years ago and they decided to open the winery four years ago. Coincidentally, Gloria and I were visiting Alamosa Wine Cellars at the time and they told us about a new winery (Fiesta Winery) which had just opened the week before. That was in 2010, so we were among the first customers they had. Now after over four years later, they are ready to open their sixth tasting room. That is an incredible expansion in a short period of time. 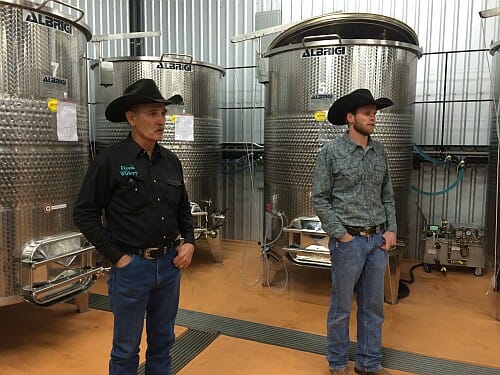 Fiesta Winery produced 1,200 cases of wine the first year and in 2014, they did 11,000 cases. The first wines they created were sweet wines for the wholesale market. Even though their sweet wines are still the most popular, they make a number of non-sweet wines. Since they are in a dry county, all wines have to be at least 75% Texas.

We finished our tasting with a 2014 blend of Cabernet Sauvignon, Tempranillo, and Cabernet Franc. It had been an interesting tour at Fiesta Winery showing they provide more than just sweet wines. In the meantime, co-owner Bill Bledsoe from Texas Legato had arrived to join the bus for our next winery. On the bus ride, he talked about his winery and the wines they make.

We arrived at Texas Legato and met Bill’s wife and co-owner Sulynn Bledsoe. Since Gloria and I were there last, a new covered patio had been built. A table had been arranged on the patio for us to have a boxed lunch which the group eagerly enjoyed. After eating, we went to the production area to do some tastings where we met assistant winemaker Keith George who helped out with the tastings. 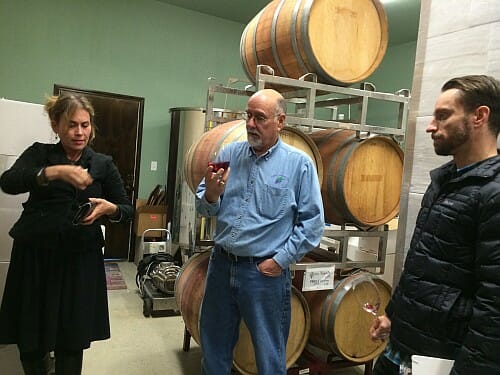 Bill Bledsoe in the middle of Texas Legato

These are the tastings the group enjoyed:

They were getting ready to do bottling and had a number of empty wine bottle pallets ready to fill with Texas Legato wine.

Everybody had a great time and it was time to make the short trip next door to Pillar Bluff Vineyards which is Bill Bledsoe’s twin brother’s Gill Bledsoe’s winery. We arrived at the winery and Gill met us inside the winery. He had heard the group was hungry so he had pulled pork sandwiches for anybody that wanted some. 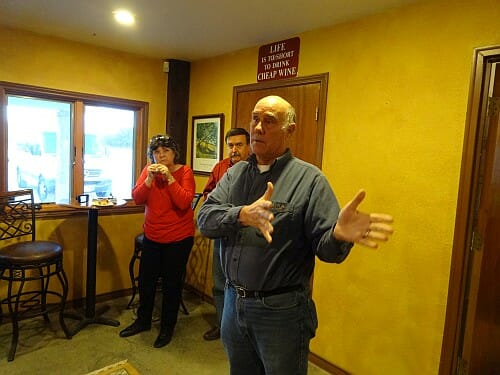 Gill decided to split the group in half so the first half, including me, went to the production room with him. There we had a barrel tasting of a Tempranillo 2014 which had come from a 1.5 acre vineyard from Joppa, Texas.

The group I was with then swapped with the group at the tasting bar where we tasted some finished wines. Some of the wines were a Cabernet Franc 2012, Cabernet Sauvignon 2010, and Tempranillo 2011. It had started getting dark and we were still behind schedule, otherwise we could have stayed longer at Pillar Bluff.

During our tastings, Craig Pinkley from Pilot Knob Vineyard arrived to take us to his winery next. It was already getting close to 6:00 p.m. which is the time the winery usually closes, but he said they would stay open for the tour group. After saying goodbye to Gill Bledsoe, we boarded the bus to hear about Pilot Knob on the way. When we arrived at the winery, it was already pitch black so we couldn’t see the lovely view and the volcanic formation of Pilot Knob in the distance.

After entering the winery, we went to the next room where a table again was set up for yes. We also met Beth Pinkley who helped with the tasting. These are the wines we tasted at Pilot Knob: 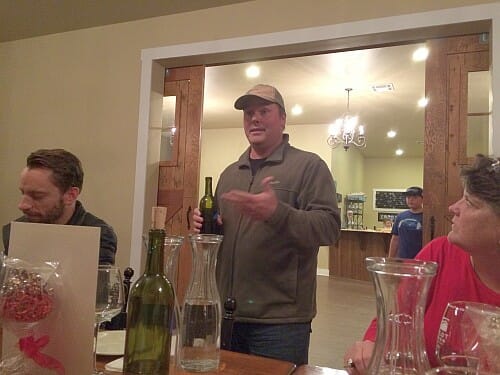 Craig said they are currently making 1,700 cases of wine a year.

We were running over 90 minutes behind schedule, so we did not get to enjoy as much time at the later wineries as we could have. The group said goodbye to the Pinkleys, boarded the bus, and eventually arrived at our original starting location in Austin. It had been a long, but great day of visiting wineries on the Top of the Hill Country Wine Trail. From listening to everybody on the bus, it had also been a very enjoyable day of tasting excellent Texas wines.