Seven of the media invitees met the Heart of Texas Wine Tours bus in Austin at 8 a.m. in the morning and the tour was on. The first stop was Perissos Vineyard and Winery where owner Seth Martin met us when we arrived and we picked up the eighth and final media invitee. 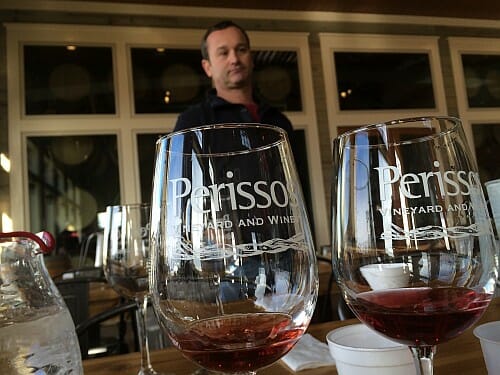 Seth started out explaining the background of the winery and the current 16 acres of vineyards. We met Seth’s wife and co-owner Laura Martin inside the tasting room where a table had been set up for our tasting. Two glasses were at each place setting and we started tasting wines. These were the wines tasted from Perissos in order to compare a finished wine versus an unfinished wine:

Seth said 99.38% (that’s correct) of their sales come from the tasting room. He was asked about when they harvest and replied that the maturity, seeds, and tasting the grapes is what they use to determine harvest instead of chemistry like Brix and pH. Seth showed the production area to the group and they will be getting three more 2,500 gallon tanks in this year. They have rental tanks right now which he said was a good thing because that means they have more juice than was expected. 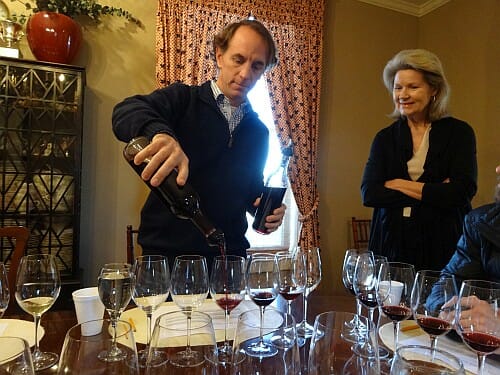 We arrived at Fall Creek where co-owner Susan Auler was also present to welcome everybody to the dining room with a table already set up with the wines we were going to taste. Sergio led us through the tasting of these wines:

It had been another great tasting and Managing Partner and General Manager Mike McHenry from Wedding Oak Winery joined us to lead us to the next winery. This was a great idea to have people from the next winery join the tour bus because it allowed them to describe the upcoming winery and answer questions on the way instead of spending time at the winery to do so. 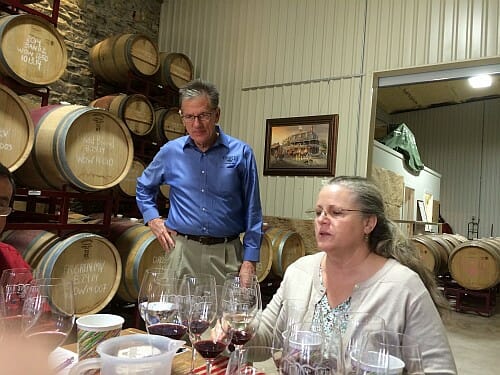 We arrived at Wedding Oak Winery and went to the barrel room where a table had been set up for us. We met Mike’s wife Lynn McHenry and winemaker Penny Adams. We sat down and Penny led us through the tasting:

The Dolcetto would be joining the Bridal Series of wines, currently Bridal Veil, Bridal Blush, and Bridal Bliss, and it was time to represent the men and be called Tuxedo Red. Mike explained that Wedding Oak’s current philosophy is to release wines young and let the consumer age them. This lets them sell the wines at a lower cost instead of having the wines age at the winery.

Joining us at the tasting was Karen Johnson, co-owner of Alamosa Wine Cellars, so she joined us on the bus to head to Alamosa. We rode by the house of San Saba native Tommy Lee Jones who enjoys a reclusive life when he stays in San Saba. We learned from Karen on the bus that Alamosa Wine Cellars is currently for sale so they have not been making new wines. So instead of our tasting being new 2014 wines, we were going to taste a historical perspective of their wines. 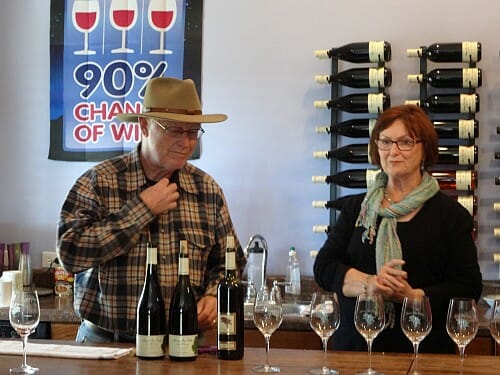 We arrived at Alamosa Wine Cellars where we met co-owner Jim Johnson. The wines we tasted were:

The group was very impressed with the wines offered by Alamosa Wine Cellars and I hope Jim and Karen Johnson are able to find a buyer for the winery.

Owner Stephen Baxter from Fiesta Winery had arrived to join us on the bus and we were off for the short distance to the next winery on the tour.

See Part 2 for the rest of our tour of the Top of the Hill Country Wine Trail.